Those characters she picked up were so cool that her boss seriously told her to introduce cute girls too after the last press.

Here’s Saori who had to make a special article for the girls’ character at this Press.

I love girls’ character which has certain characteristics so so so much!

I’ll tell you guys about it!  The characteristic that I like is...!!!

Here we come!  It’s time to show you some girls with ponytails that I really like!

She’s one of the ponytail joshi sometimes as a manager of Iwatobi High School, and sometimes as a sister of her favorite older brother, Matsuoka Rin.

But her true color is..., a muscle buff ponytail joshi, which is so rare in anime world(。-`ω-)! 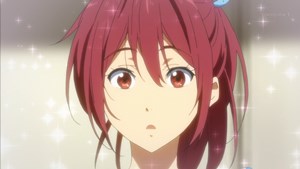 She was so busy making her brother, Rin-chan and four members from Iwatobi High school come around at the last season of Free!.

But in the sequel season of Free!, she is so free from everything that she even becomes one of the judges for a muscle examining meeting or puts ‘something’ in the dish, making members from Iwatobi High School stunned.. 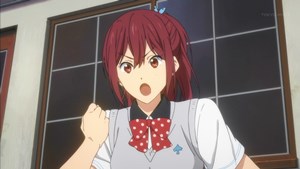 But I kind of wanna eat her home-made lunch box... (｡･ρ･) 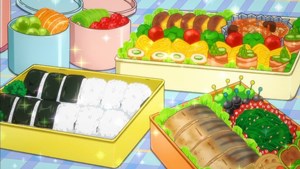 I really want to see pretty Go-Chan without the ponytail wearing a bathing suit in the Free! - Eternal Summer!

Now, I’ll introduce Ayase Eri-Chan from Love Live!, who used to be a chief of the student council at Otonokizaka-Gakuin and she’ a quarter Japanese-Russian! 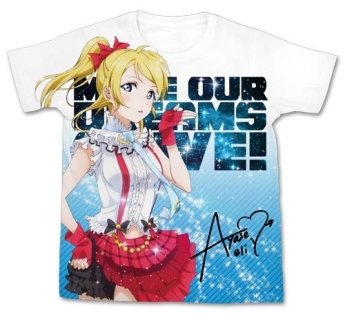 At the beginning of Season 1, due to her position as chief of the student council, she couldn’t get along well with the members of μ's, because she thought they were just playing as idols.

But at the end of the story, she started to realize that they were ‘seriously’ trying to prevent Otonokizaka-Gakuin from being closed down by working as idols, getting attention from people. 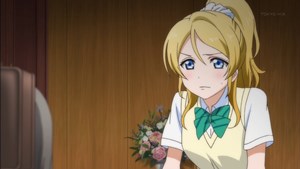 Of course she didn’t want Otonokizaka-Gakuin to be closed down, either.  She feuded since she couldn’t tell them that ‘she wanted to join them’, who she had been treating cold. 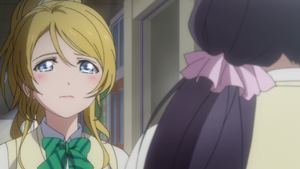 But she finally made a decision to be a member of μ's with a help of Toujou Nozomi-Chan or Kousaka Honoka-Chan, who is a leader of μ's. 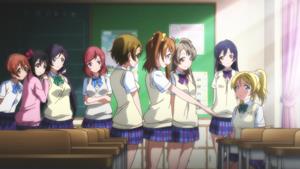 Since her position was ‘chief of the student council’, her character personality has been expressed as a ‘firm and diligent’, but... （＾ω＾）  (If anybody wants to know what her true colors are, please check the anime out!)

Actually, she is our boss’s favorite character!

(  'ω') “I like her because she has a perfect body and nice blond hair, and I also like her being so cute, not being able to joinμ's even though she wanted!!!

“Who would you pick among all the manga/anime characters, if you could have one as your family member?”

I would definitely pick her（＾ω＾）!

・considerate of her sister 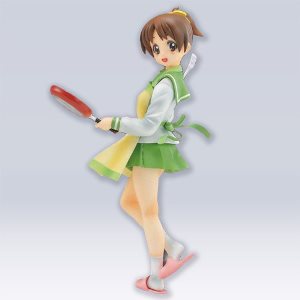 （＾ω＾）Can you imagine?  She is almost a perfect sister...  I want my brother to be like her!

In Season 1 and 2, which were animated, she wasn’t that positive staying away from the story, but in ‘K-on! High School’, which was a Manga version, she became a main character of the story joining light music club with Azusa! (・`ω・)

I wish it to be animated someday!  I’ll be waiting still!

Well, I’ve been portraying her as ‘ a super perfect girl’, but actually, she has a weak point.  It’s...

that she likes her sister, Hirasawa Yui too much. （＾ω＾） 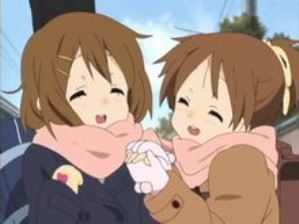 When she found out that Yui would be out for a couple days for her school trip, she started crying and complained about how she would spend time without her!

But this is what I like about her, to tell you the truth.  I think it’s so cute that perfect people have these kinds of weak points, don’t you?

By the way, there is a scene in the anime, where she was intentionally taking her ponytail off.

But most people who saw her could never recognize her, because.... （＾ω＾）  You’ll know why in the anime!

She is a warlike and selfish ‘Magical Girl’, who has a real fighting strength(。-`ω-)!

...I might have introduced her as if she was a villain, but she is actually a nice girl.

When she met the main characters at the beginning though, they used to fight a lot because she couldn’t open her heart yet. 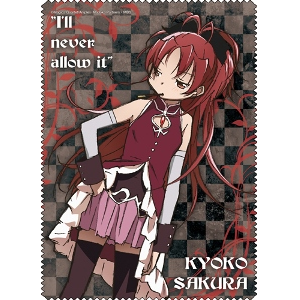 But once she gets along well with them, she shows her cute part being a little stubborn and considerate of others, which are her true colors!

Especially when she always makes fun of Miki Sayaka-Chan, wanting to take care of her from their experiences in the past. 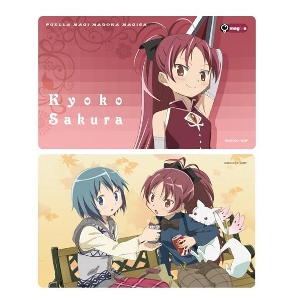 I know her long and beautiful ponytail is so attractive, but from Saori’s point of view, I love her (canine) teeth that can be seen when she smiles!! (*゜∀゜)=3 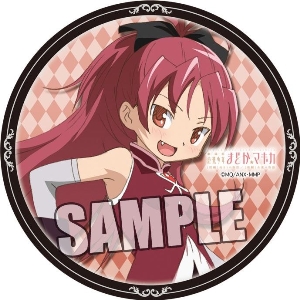 I was actually gonna make this article, ‘A special article for cute girls with those teeth!’...

I just couldn’t make it since they are too maniac.. Too bad...!

But if I could make it happen, I would definitely introduce her to you guys! (*゜∀゜)=3

I realized that ‘she is such a nice girl’ right after I saw her teeth!  They’re like a magic that can people’s mind warm!

A special article for girls with ponytail ...

Ohhh, of course, her ponytail is so pretty too...  Oops, I almost changed the theme of this article...

But, she’s that attractive!

If anybody doesn’t know her well, just check her anime, manga, or stage version out(σ´∪｀σ)!

I cheer her up with my two daughters every Sunday.

It’s Aino Megumi-chan who is a main character of HappinessCharge Precure! and transforms to pink Precure! 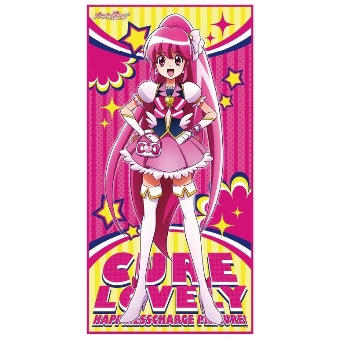 Unlike all the main characters of Precure, she is the one who ‘really hoped to be Precure with her will for the first time’! (｀・ω・´)

In all the series before, when a main character gets in a pinch, then they show Precure who is a fighter against the villain.  (Then she transforms for the pinch fighting... When we see a fairy who says, “Transform!” in a pinch, we somehow recall this character, don’t we?)

But in the world of HappinessCharge Precure!, Megumi-chan knew the existence of Precure who fights with villains beforehand, since there were some Precures all over the world before she transforms to Precure.

She fights with a strong mission and justice in her mind since she could be one of the Precures, which she thinks as ‘a super heroine that can save world peace’ (｀・ω・´)!

But, she is a 14-year-old girl, just like other girls who want to be matured...

Of course she sometimes gets disappointed at her failure, for example, her grade gets lower, working too hard on Precure.  (All the former Precures haven’t shown this kind of disappointment.)

I just wrote a lot of hard things about her...!

But not good at sports and studying!

Why don’t you guys cheer her up with our boss!

There are more pretty girls with ponytails(・`ω・)! 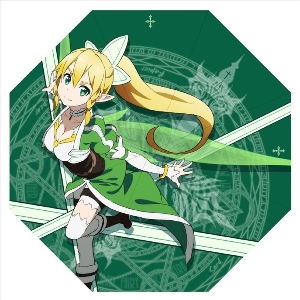 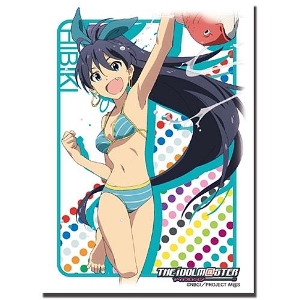 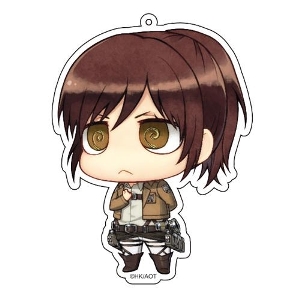 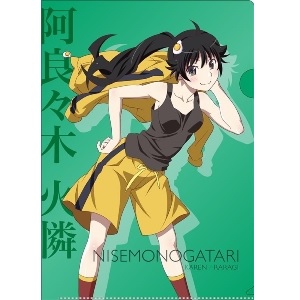 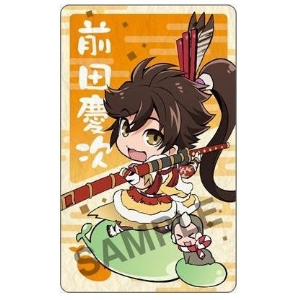 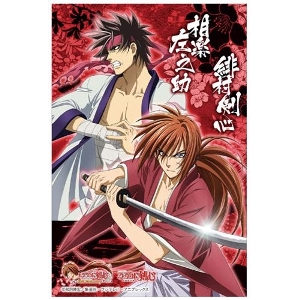 Weren’t there some boys’ characters in the end, were there?

Ponytails are so nice, aren’t they?!  Since my hair has been growing too, I might do the ponytail too??  Ok, see you at the next Letter!  At Saori’s fancy!

See you guys then!