Give me that touching scene, once again..  A special article about anime that moves us to tears!

Yes, it was the ending scene.  I bet most people who have watched the movie might have known that the last scene would have been like that..., BUT I know they just couldn’t help but cry when they actually saw the scene.  Yes, that’s the scene. 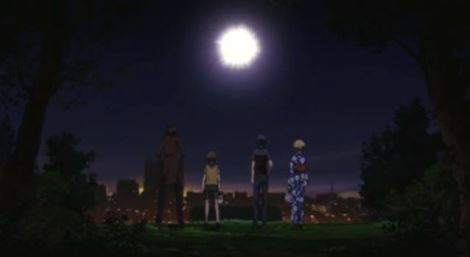 （・_・。） Yes.  It’s true that anime is such a wonderful thing for me to give me ‘something fun’ or ‘something happy’.

（・_・。）That’s why I tend to stay away from ‘the anime having sad or painful developments’, which would hurt my mind.

(´；ω；｀) But, at the same time, that kind of anime will encourage us to move on to the next step when we face something hard in our life, I think.

(´；ω；｀) Actually, most of the anime that I’ll introduce to you guys in this article have sad or unhappy developments, for sure.

(´；ω；｀) the characters who have never given up on those situations and have kept going until the end.

We always, and will always get along well with each other. 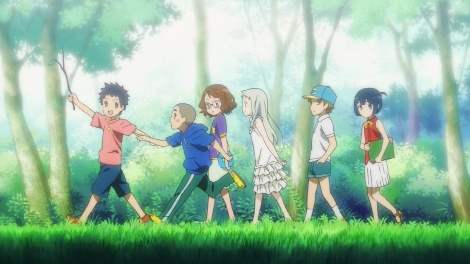 Long ago, there were six boys and girls who were close friends.

They were always together whenever they went anywhere, and whatever they did.

They built a little secret base in the forest, and formed the secret organization, ‘Super Peace Busters’ that nobody could join in.

It could have lasted forever for them to have a peaceful, normal daily life together. 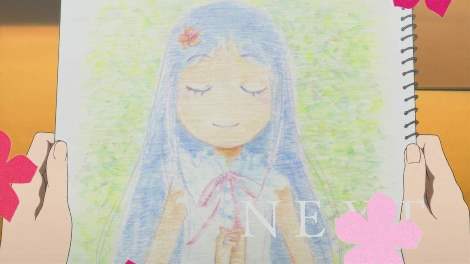 One day, their peaceful days ended all the sudden.

One of the members, Menma (Honma Meiko) drowned in the forest’s river and died.

Due to Menma’s death, other members stopped coming to their secret base and started to gradually keep their distance. 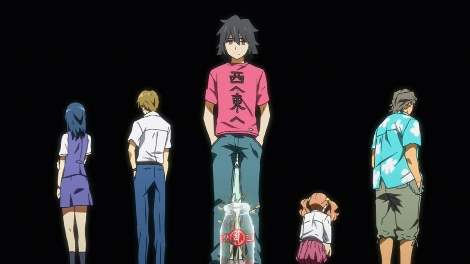 In time, they grow themselves, avoiding their favorite member’s death, or, being unable to accept it. 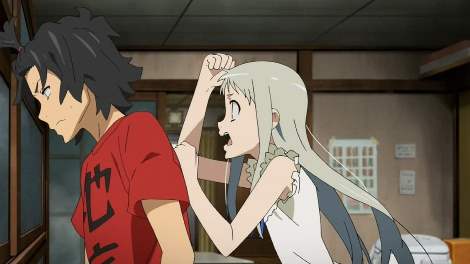 Menma, who was supposed to be dead, ‘came back’ as a ghost, to see Jintan (Yadomi Jinta), who was the leader of the six members. 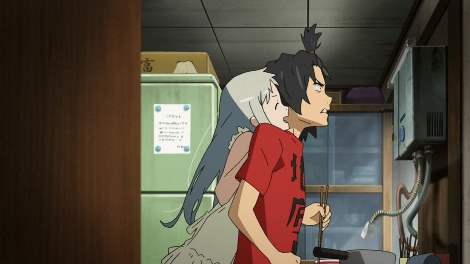 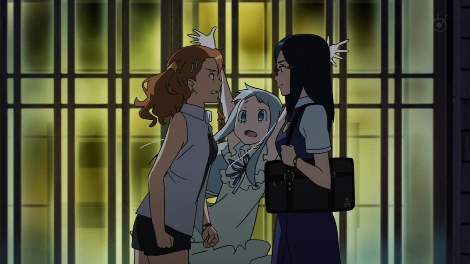 The only person who could feel Menma was Jintan (Yadomi Jinta).  No other members could feel her voice or appearance. 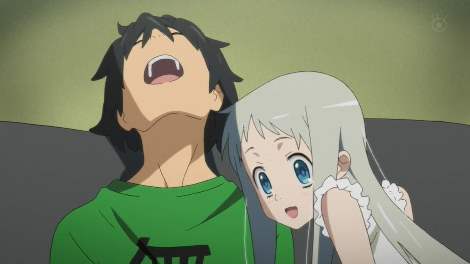 Jintan kept helping her with solving her ‘regretting’ (which was the reason why Menma came back), by doing various things, so that she could go back to heaven again.

He cleared the game, which she missed playing when she was still alive.  He took her to the memorable secret base... 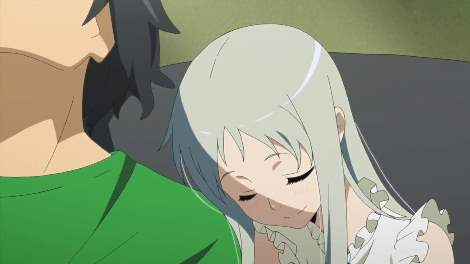 Her regretting..., it was finding out her past, which meant that she had to reencounter all the members who were taking no contact with each other then. 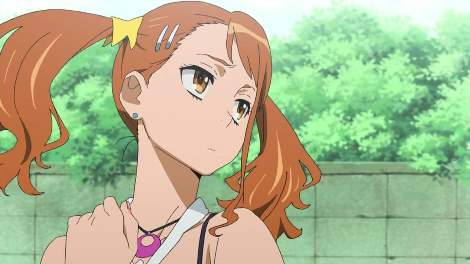 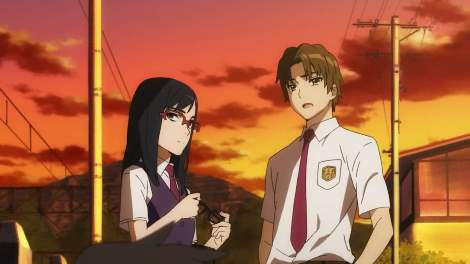 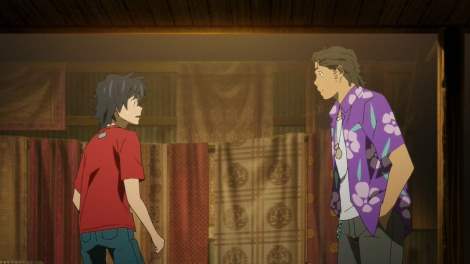 Five members who had been separated, are now getting closer like before, thanks to what Jintan did.

Of course, it took time to get closer, but he wanted them to be back for Menma... 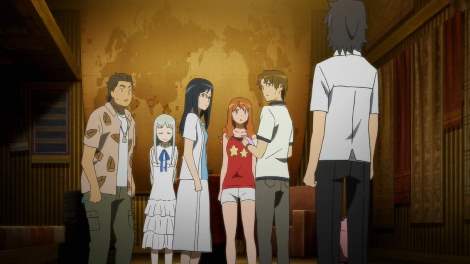 What do you think Menma is regretting?

Do you think the members of Super Peace Busters could make it come true?

And, when Menma’s dream comes true... 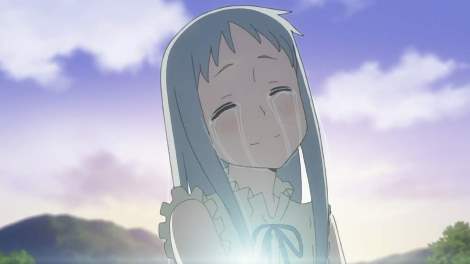 What will be the ending for the Super Peace Busters...

Guess what?  I (Saori) almost cried already, writing about this article.

Tear came down to my eyes, when I saw Menma cuddling close to Jintan. (´；ω；`)

It’s amazing..  I just can’t forget how wonderful this anime is, even though three years have passed since the last episode.

Some anime fans in Japan said,

“It’s just so hard.  I feel like throwing up.  But I just gotta watch it.”

“Though they try to get rid of their trauma in this story, I feel that they could even dig up my trauma too.”

“It’s pretty hard for me to save up this uncomfortable feeling every week..”

Yes, they all say they got attracted by this story, but at the same time, there were so many people who hurt their feeling as if that was their problems.

“Even though this story has an unrealistic setting, we can feel familiar with the story itself since ‘it could happen to anybody’.

By the way, here is the scene in the episode 1, which made us the saddest.

When Menma visited her house..., she happened to see her mother who got old, offering Menma’s favorite food, ‘Curry and Rice’ on the ‘Family Buddhist alter’. 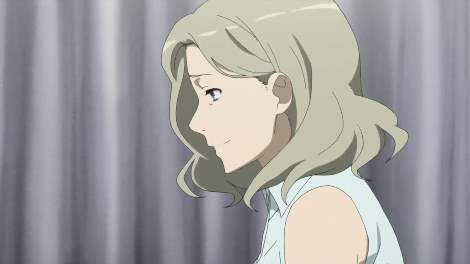 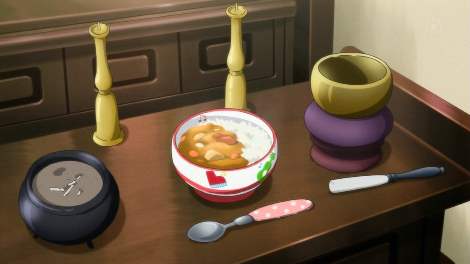 Menma’s younger brother, who got older than her, said to his mother in a chilly manner.

He looked absurd to see his mother treating Menma as if she was still alive.

But his mother looked puzzled and said, “But your sister was a little clumsy...so maybe she might not notice that she’s dead..”, and laughed. 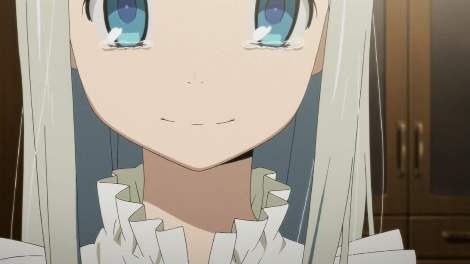 Menma said with her voice shaking, knowing that nobody could hear it.

She then realized and felt keenly that because of her death, her family and Super Peace Busters got separated.

This is what I ask you guys.  When you watch this anime, watch from episode 1 to 11 in order.

If you watch from the last episode, or only the last episode, just because you can’t wait, you will never feel ‘the best moving part’, which you would have been able to feel.  I (Saori) think that this is such a wonderful anime that you can never watch these days.

So please, please watch it, if you haven’t watched it yet...!

Be sure you watch the final episode when nobody is around you and have a towel to wipe your tears, ok? 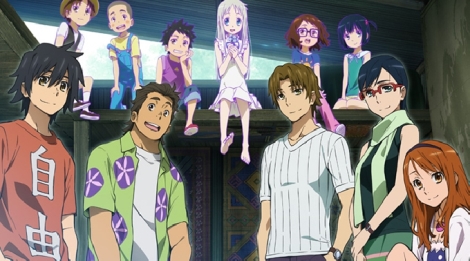 You know that, right? 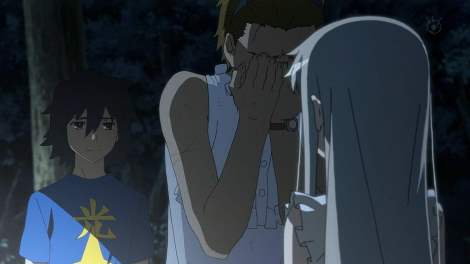 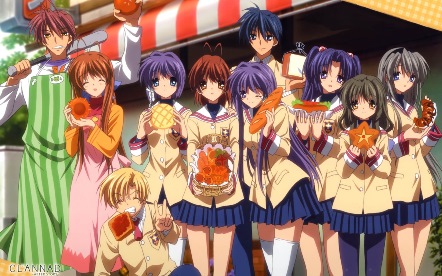 This is originally released in 2004, as a love-adventure game for the computers only, and it got animated by Kyoto Animation in 2007, as one of the representatives of the ‘crying anime’.

When I (Saori) asked some of my friends what they would say, if they could pick one from ‘Crying anime, or games’, they first picked ‘CLANNAD’.

Somehow they have that kind of recognition. 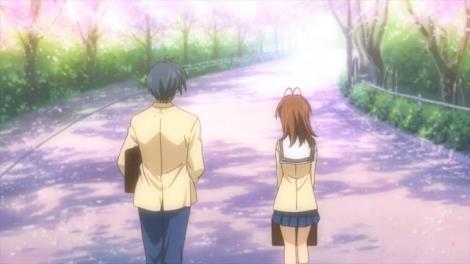 The main character, Okazaki Tomoya encountered the girl who whispered to herself on the hill on the way to school.

Her name is Furukawa Nagisa.

“Just find it.  You can just find something happy or something glad yourself, right?”

Okazaki-Kun muttered back to her, whom he saw for the first time, walking toward school.

Nagisa-chan started walking with him so that she wouldn’t be late for school. 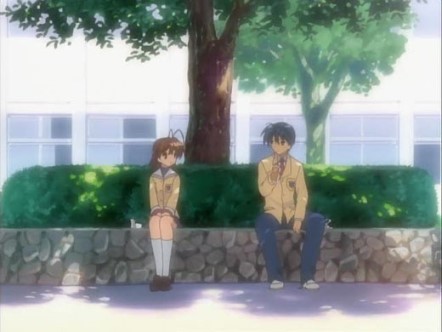 They encountered coincidentally at school and they were getting closer with each other.

Since Nagisa-chan was weak, she took a year off from school for a year because of her illness.

That was why she kind of got isolated from people around her and was always alone.

Okazaki-Kun was the only one who was nice to her and they were getting closer gradually.

Her little hope was to join the ‘theatrical club’, which she’d been interested in before.

But the club was abolished..., then they started to reform the club with some other friends.

This is a long, long story, starting from here. 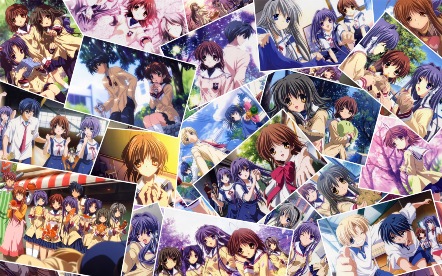 This is a ‘student-version’, which almost isolated students get together and connected with the bond.

And there is also an ‘AFTER STORY’ version, which is about after they graduate from school.

By the way, everyone who said they liked CLANNAD suggested that we should watch this anime, thinking the ‘AFTER STORY’ version is the main version and the ‘student-version’ is a prologue.

Don’t ever finish without watching ‘AFTER STORY’ version. Σ(｀д´/;)/！

What on earth is it?  I don’t know why all the fans of CLANNAD are united in the same consciousness...!!

And by the way, the ‘AFTER STORY’ version is..

a story about Ushio-Kun, who is a child of Nagisa-chan and Okazaki-kun, after they got married. 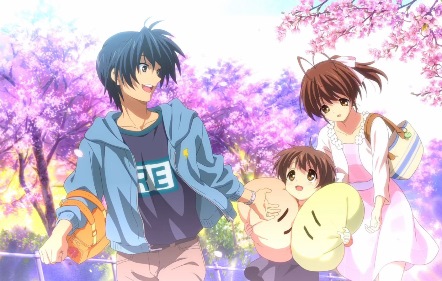 (´；ω；`) I hear that from all the fans of CLANNAD from all over the world.

I (Saori) think this picture should be the one symbolized as CLANNAD. So.., let me just show you guys this one.

Honestly, I don’t think you can feel how wonderful CLANNAD is only by watching episode 1 of Season 1.

I actually watched episode 1, but it was all about their encounter and some explanation about the characters.

This is one of the famous phrases among all the fans in Japan but someone said, “Anybody who says it’s boring only after they watch episode 1, is the worst.

Evaluate it only after you watch everything.”  Then he/she was asked, “Then what is CLANNAD for you?”

That was what he/she answered. 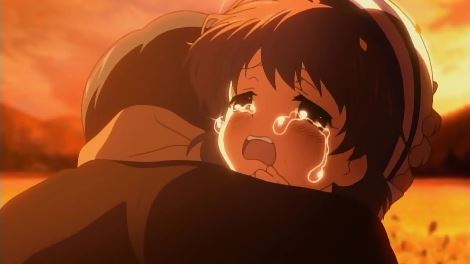 I (Saori) watched the ‘AFTER STORY’ version.

It’s hard.., just so hard.  I loved Nagisa-chan and Okazaki-Kun so much, seeing how they were trying to look up and overcome the mixed experience, such as something happy, something joyful and even something unhappy.

That’s why the moving scenes in the ‘AFTER STORY’ version were just beyond the comparison to Season 1 and I couldn’t help but cry.

I can feel the same way as Okazaki-Kun and Ushio-Kun.  He is just 5 years old.

Why was the 5 years old boy treated so badly?

Destiny is just so cruel.  But that is why; we just can’t wait to watch the final episode...!!

Yes, the final episode!!!  I think it’s so wonderful. 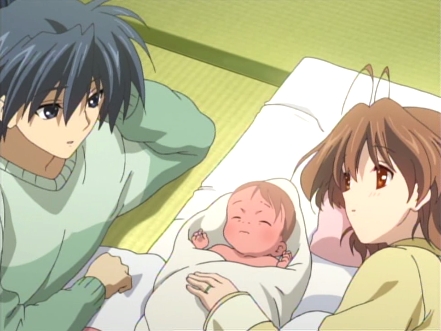 Unlike Ano Hi Mita Hana no Namae wo Bokutachi wa Mada Shiranai, CLANNAD is the anime that we can’t watch in a short time.

It’s a big-scaled manga with 40 episodes, so we can understand that, right?

Because we’ll see a life of a family through the anime, CLANNAD 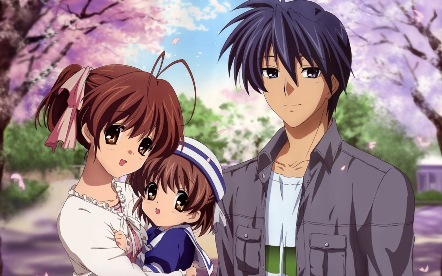 You know what?  This is the longest article ever already...

It’s a little hard to read since it’s too long.

So make CLANNAD or Anohana a little shorter.

Ahhh..., maybe I can’t show you more, even though I (Saori) wanted to show you these anime below...

If you want to follow the story slowly for the long time, I’ll recommend CLANNAD、Angel Beats!、Toradora!、K-ON!!!

Ok now, even though I showed you some crying anime, it depends on types of people ~ if you can cry or not. (´；ω；`)

For example, one of my friends said, “I like all the games from Haikyuu!!  Each game has a drama and they are all moving... maybe because I’m just too sentimental?”

The most important thing is ‘You have to actually watch it, if you want to encounter the anime you will like ~ no matter what they’re moving stories.’!

Why don’t you watch various anime so that you can encounter a great anime!!  Why don’t we cry watching them tooﾟ(ﾟ´Д｀ﾟ)ﾟ｡!!