Saori(゜∇ ゜) “Hello everyone~! Have you been enjoying watching 2019 Fall Anime~?! This is our weekly updated segment, Coupling Column! It’s Vol.9 today! The Vol.9, where Saori shares my own preference in a fun way, will be featured….!” 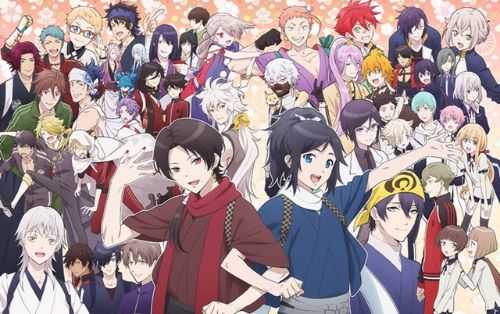 Saori(゜∇ ゜) “Speaking of Touken Ranbu! It’s been loved by many fans with always updated contents such as the latest announcement of releasing its play version and adding new characters! Who would be the HOTTEST Couplings in such a popular Anime? Let’s go check it out now!” 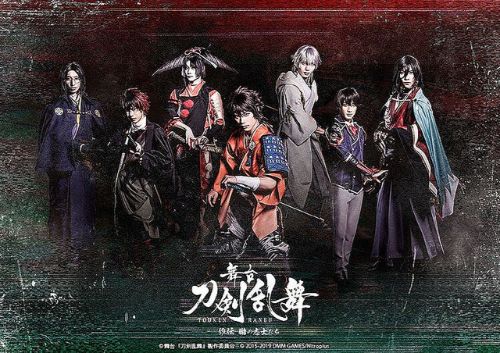 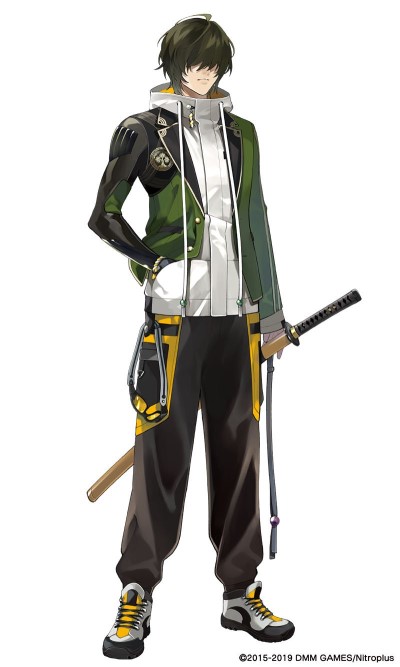 The relationship of the two: Both are down-to-earth, really supporting us players 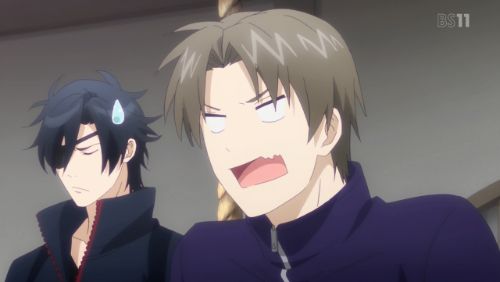 Saori(゜∇ ゜) “Shokudaikiri Mitsutada is well-known for being a sword which used to belong to Date Masamune. This name originally comes from the anecdote, where Date Masamune killed the criminal who was hiding behind the bronze candle stand (shokudai), by stabbing both him and the shokudai. He looks alike with his owner,【Date Masamune】especially their black hair, eyepatch and when they care about how they look and behave. We can see how much he cherishes and respects him from these similarities. His personality is a ‘guardian’ if I have to explain in one word… He’s like a sweet big brother, always being calm and smiling on his face! He is cool.” 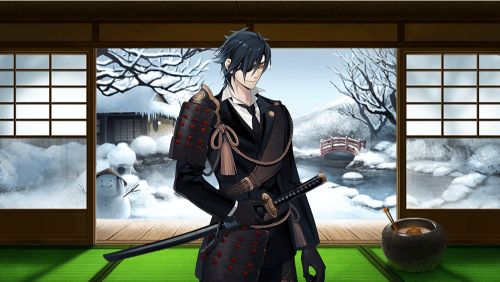 Saori(゜∇ ゜) “And Heshikiri Hasebe is a sword, which used to belong to Oda Nobunaga before and this name comes from the anecdote, where he stabbed the monk who was hiding the shelf. While he is very loyal to the players, he sometimes says something sarcastic and shows confidence to his buddies. That’s what I like about him~! He still has a hazy feeling towards Oda Nobunaga, having given away him (the sword) to others so he tries to do best for the player as if he thinks ‘If I am capable, nobody would give me away’… Oh, I love it! Since he’s such a hard working sword, I bet many players are putting him as a close aide..” 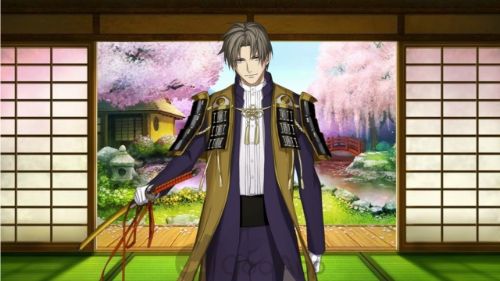 Saori(゜∇ ゜) “Like this, they attach to their ex-owners in a different way. Actually, they really are not connected in the game but Shokudaikiri said, ‘Hasebe and I seem to have good chemistry but we don’t have anything in common when it comes to talking together because of our old owner’. They both sure try so hard for the sake of their owners. Shokudaikiri supports the players with his calm and kind personality. Hasebe tries hard devoting for the players, even though he’s a little sarcastic. They are totally opposite but might have good chemistry at the same time. They are heartwarming, aren’t they?” 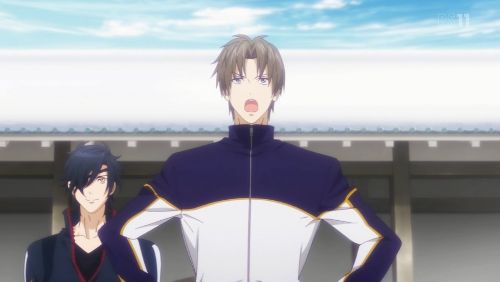 Saori(゜∇ ゜) “For those who like these two, watch Anime, ‘Touken Ranbu Hanamaru’! In this Anime, Hasebe works as his host, Saniwa’s ‘caretaker’, playing an active role, telling other Chara what Saniwa wants to tell them when they’re lazy! He’s been by his side as Hasebe’s supporter since Episode 1! These two also appear in Season 2 so it’s needless to say that Touken Ranbu Hanamaru would be the bible for those who love seeing their interactions!” 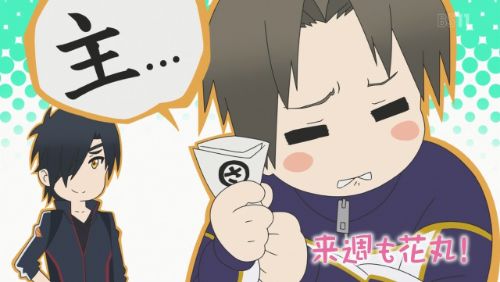 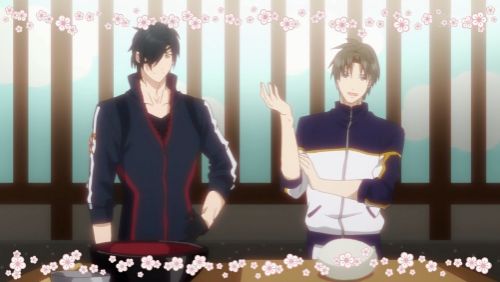 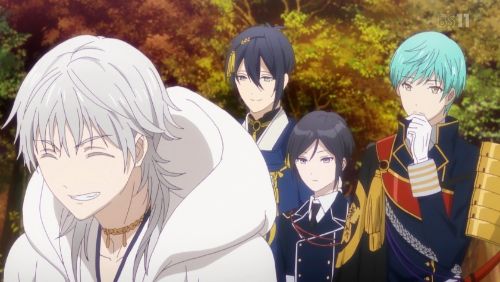 Saori(゜∇ ゜) “I wouldn’t say they get along in the game…. but there’s something strange in common between them!”

Saori(゜∇ ゜) “I bet even those, who haven’t played this Touken Raubu, know Tsurumaru Kuninaga. Always being mischievous, disliking to be bored, he desires for ‘surprises’ for the battle as well as for his daily life. He always tries to do something exciting to himself and the enemies, by tricking a surprise attack or finding the place where he can attack, while sneaking at the enemies’ formation. Why…? Because he was created as a sword over 1150 years ago. Being still alive in 2019, he always tells the player, ‘Our heart would die if our life is full of predictable things..’.” 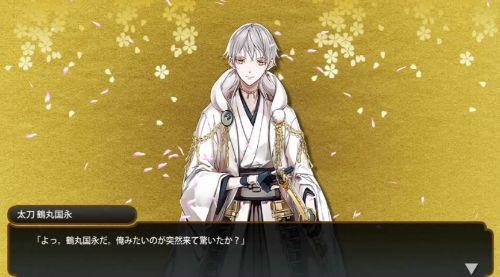 Surprises are essential in life. If everything goes according to how it's planned, the heart will die earlier.

Saori(゜∇ ゜) “He, as a sword, has been stored as one of the well-selected collections of the Imperial and Emperor’s family, after it was given to the Meiji Emperor as a present. They currently are not planning to show it or display it in public but it sure is the sword, which has lived for over 1000 years along with the human.” 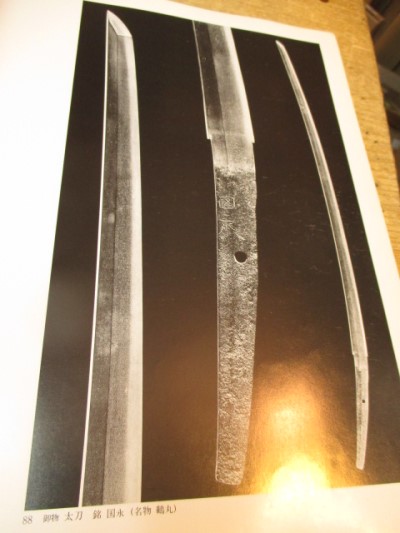 Saori(゜∇ ゜) “And here is another one. Ichigo Hitofuri is also a sword, which has been stored in the same place as where Tsurumaru Kuninaga has been, as one of the existing swords.” 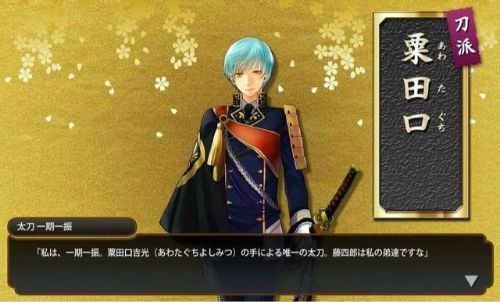 Saori(゜∇ ゜) “It’s the sword, made by a sword artisan, Awataguchi Yoshimitsu, and he named it Ichigo Hitofuri because ‘it was the only Tachi that he had ever made in his life’. And then Ichigo ended up becoming the oldest brother of Toushirou, which are other short swords that Awataguchi Yoshimitsu also made. He’s very kind and polite as the oldest of a dozen brother and always tries to behave so he can be a role model for them.” 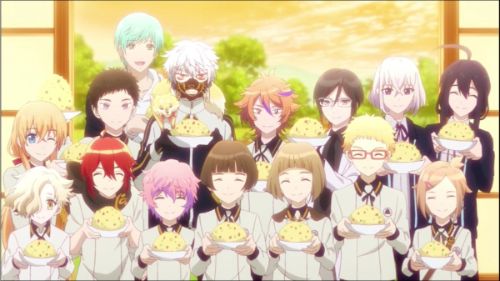 Saori(゜∇ ゜) “Again, it was made about 1000 years ago, and it’s been stored in the same place as others have been. The type of the sword is Tachi and the rarity of the game is so high. But one is mischievous and the other one is down-to-earth. The opposite personality makes us think that they are close brothers but again, they show us various expressions as one of the oldest swords. I don’t know why they don’t appear together in the game or Anime, while they have lots in common~. I’m now expecting that there will be more interactions in the movie, ‘Katsugeki Touken Ranbu’…~~”

The relationship of the two: Minamoto Clan’s Treasured brother swords, cherishing each other 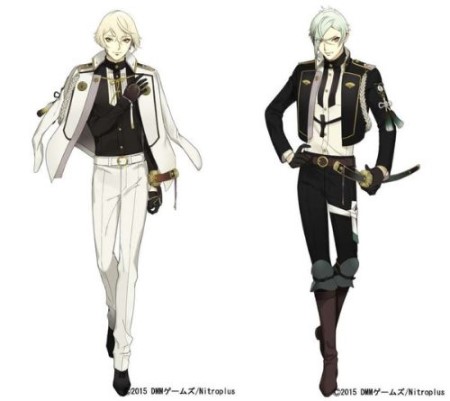 Saori(゜∇ ゜) “Higekiri and Hizamaru might get along better than Awataguchi brothers, which I mentioned above! Both were made about 1100 years ago and they are known to be a legendary sword which used to belong to Minamoto no Yorimitsu. They’re also known to be the swords that stabbed not only the human but also to the monsters! It required so much time and techniques for me to get both of them together because they were implemented as such a rare victory reward, which a super strong Boss drops at the low probability…! I mean it was so~~~~ hard to get both of them! Especially, I finally got Hizamaru after I got four Higekiri because Hizamaru never dropped for a while…” 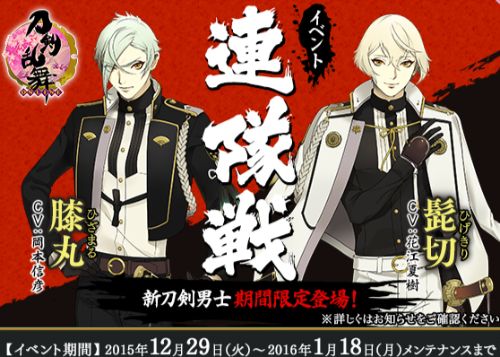 Saori(゜∇ ゜) “Higekiri has been lived as a sword for over 100 years so he appeared as a calm character. He’s rather freewheeling, than being calm, though. Since he was named multiple names by the owners, he never sticks to his name… What’s more? He even forgets his brother, Hizamaru’s name too.” 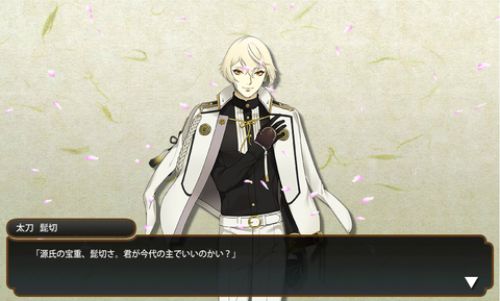 Saori(゜∇ ゜) “His younger brother, Hizamaru, is the one who really respects such a freewheeling big brother from the bottom of his heart and really cherishes him. How much does he love his big brother?  He asks the player who he meets for the first time, ‘Do you see my big brother in your place?’ (In my case, when I got Hizamaru, Higekiri had already been with me, so I didn’t have to have him miss him much…!!)” 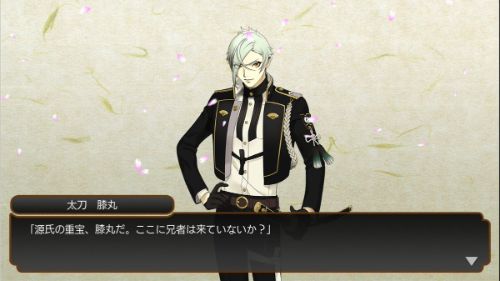 Saori(゜∇ ゜) “His personality is suuuuuuuuuuuuuuuuuuuuuper~ serious!! He is always polite and cares about his freewheeling brother. He always worries if his brother is bothering anybody. You’ll see that in Touken Ranbu Hanamaru, which is depicted about a peaceful daily life too…” 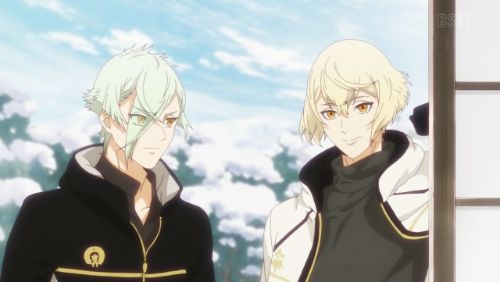 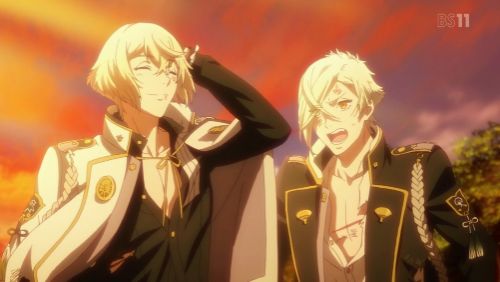 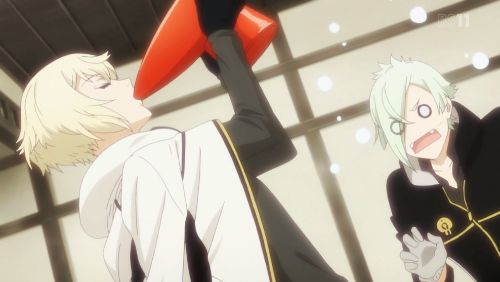 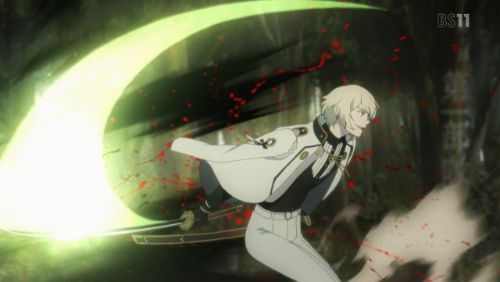 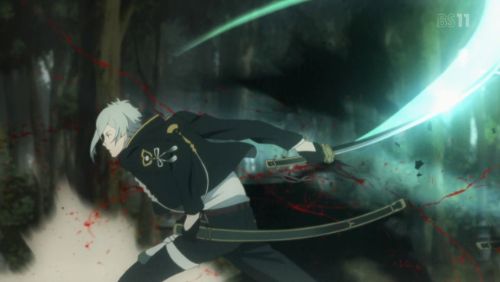 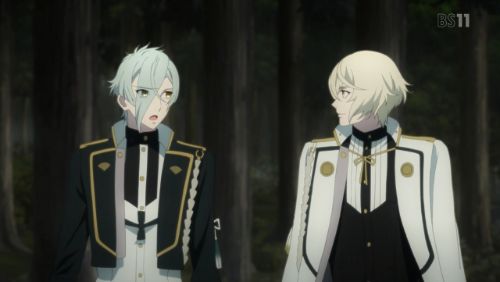 Saori(゜∇ ゜) “Even though Higekiri forgets his or Hizamaru’s names, he has never forgotten the fact that he【has a younger brother】.  No matter what era they’re in, no matter who would be their owner, no matter how many times their names are changed, there is always his loving brother with him, which would never change in the past or in the future.” 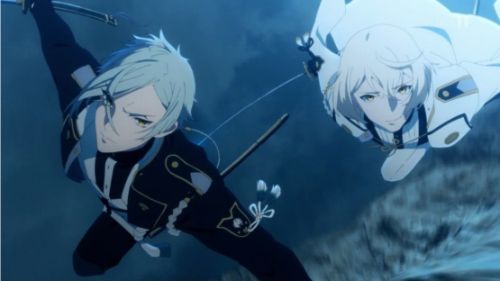 Saori(゜∇ ゜) “How did you like them!? If you think you have no time to play the original game… then check out how they play in Touken Ranbu Hanamaru , or Katsugeki Touken Ranbu, where you’ll see various mysteries and how they’ll challenge tough duties!”