★Saori Press Vol.33★Happy New Year  is just around the corner!  Let’s prepare the new anime of 2015!

It will be the end of 2014 sooooon...  I have mixed feelings of being sad and excited to have the new year...

We’ll have the biggest event in the talk of the anime and manga trade here in Japan... but are you guys ready for that Σ(´Д｀；)？

I’ve already introduced this event to you guys in the News Letter though...

And now, here we are!  Let’s prepare the new anime toward upcoming 2015 together!

Check out the brilliant anime which will cap the opening of the new year with this Saori Press!! 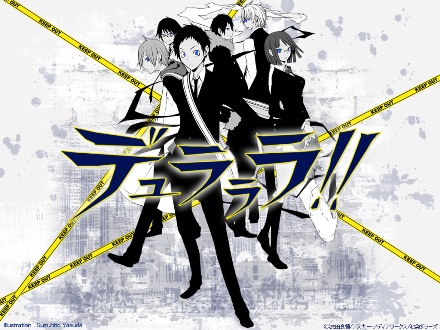 Thank you for waiting for this for these all five years. (・∀・)。

Durarara!!, which was ranked in on the top every time ‘the anime ranking that everybody wanted to watch its Season 2’, will finally be televised in 2015 (Season 2)!!!

Five years that we’ve been waiting for is only a half year in the anime... ( ；∀；)

I feel a little sad, but I’m okay!

It’s been a while since the strife that involved the city of Ikebukuro and the city finally got a peaceful life back, having unchangeable usual life.

But then again, something unusual got into the life, getting even deeper and the city ended up being chaotic...

The fact is that they announced that this Season 2 will be ‘written about a whole story of its original’s first act’ and that it will be ‘separated into three cool parts’.

It’ll be televised with the titles above...

There is a word, ‘起承転結(Kishōtenketsu)’ in Japan.  (It came originally from China though...)

It’s one of the techniques to make stories interesting when you write them.   [My (Saori’s) recognition]

起(Ki)…The beginning of the story

So, that means Durarara!!x2“承”appeals that this Season 2 is a sequel from the story which started five years ago, I guess(σ・∀・)σ！

Even though I wrote, ‘we haven’t changed at all, we can’t be catchy title either, it’s not true.

The incident a half year ago... has surely affected them and their surroundings. 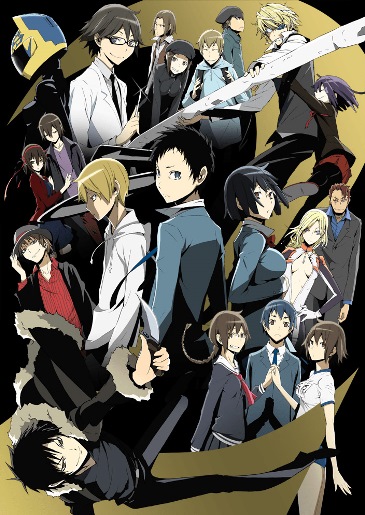 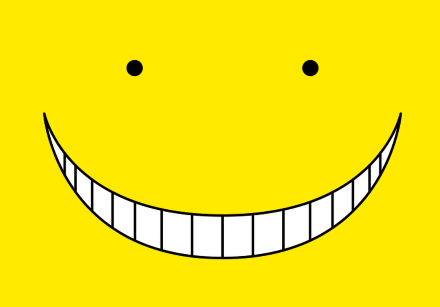 I’ve been a big fan of this cartoonist when he was still writing Majin Tantei Nougami Neuro (Private Evil Eye Nougami Neuro)!

This is a story about the unique world which includes something very important in the basis of the story as well as lots of unreasonable things, something senseless and something surreal!

No kidding!  Are you trying to make me explain the summary of that?

You don’t know anything about this amazingly famous story?!!

One day, the moon suddenly exploded and evaporated about 70 percent.

The ultra-creature, which said it was the criminal, came to the earth, saying that it will explode the earth next March.

Where he came was somehow a classroom of the junior high school.

Guess what!  He said he would be a teacher for a year there.

The leaders of each country ended up charging the students in his class with assassinating the monster with the ability beyond the human intelligence, which even the army can’t do.

Will the student be able to assassinate the teacher, ‘Koro-sensei’ before they graduate...!? 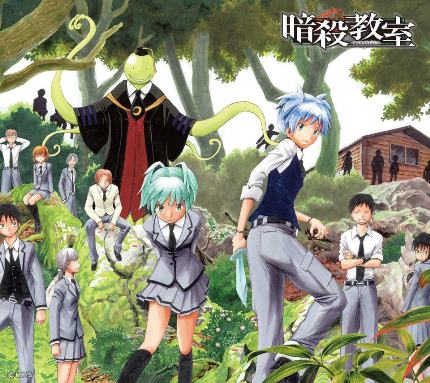 The original anime has still been serialized in Shonen Jump.

But!  Honestly, I (Saori) really wanted it to be animated after the story was all completed. (。-`ω-)。

Since this is such a great story, I really want so many people to watch it.  If it’s half-finished, I don’t want it to be animated...

I have such a strong feeling about this story like that. 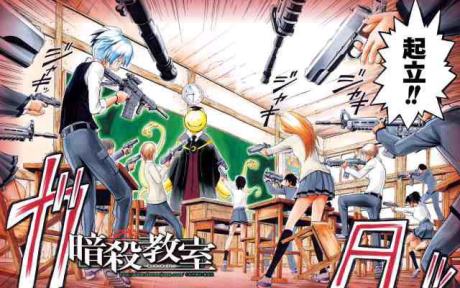 The teacher is a weird creature, and the students are assassinators...

You guys might think that way... but it’s strange.

Keeping their relationship with ‘a target’ and ‘assassinators’, they will be united with their perfectly reliable relationship...!!

The students, who separated from other students as deviates, started to find ‘something they are good at = their abilities’ through the activities with Koro-sensei.

The process is so interesting that I can’t just wait to read Shonen Jump fully every week! 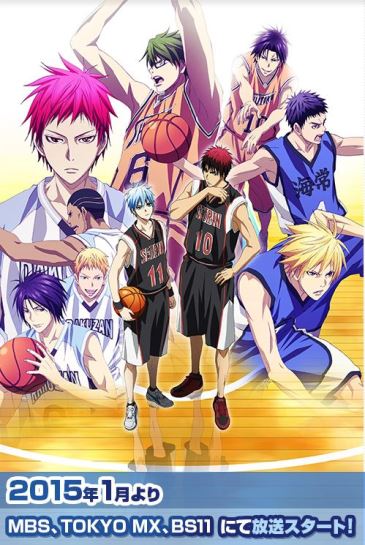 It sounds like I keep saying this so many times, but just forgive me, please!

There will be exactly ‘many sequel anime on air that you guys have been looking forward to’!! 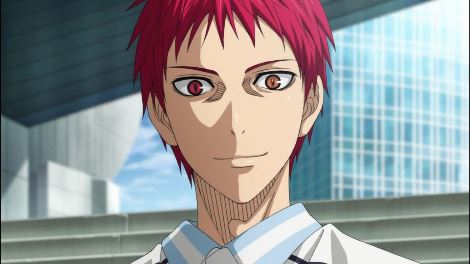 Kuroko-Kun and Kagami-Kun got a chance to go on to the semi-final of Winter Cup at the last episode of anime.

There will finally be Akashi-Sama in front of them, who is the strongest enemy of them.

The captain of the basketball team that Kuroko-Kun used to join (when Kuroko-Kun was a junior high school student), will appear as his biggest rival, in high school...!

But you know what?  The original completed just the other day... I wonder how long the anime will be televised.

Did you see the smile on Kuroko-Kun at the final episode? ( ；∀；)… What was it all about?

I’ve never seen him smiling that happily before.  That smile was clear and pure as if it would disappear to somewhere... 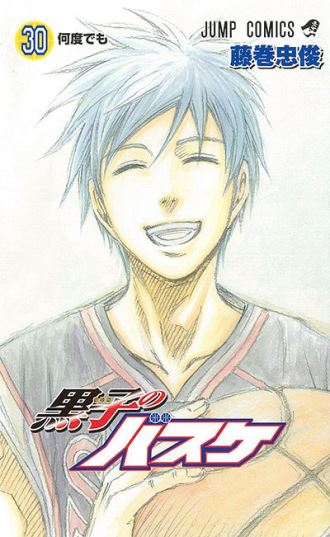 How many episodes of the anime will be televised?  Will it be the same ending as the original...?

We don’t know them yet, but we’re surely happy that we can watch the game full of ballottement, aren’t we? (≧ε≦*)三(*≧ 3≦)！！

Not only am I looking forward to the scenes of the games, but also....

I want them to have more scenes where Tetsuya 2-gou appears... …(人´∀｀)！ 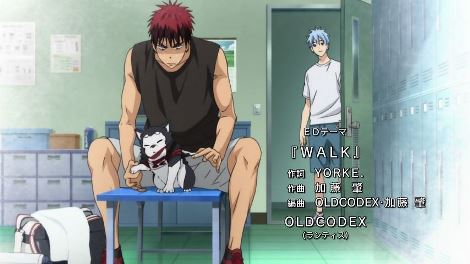 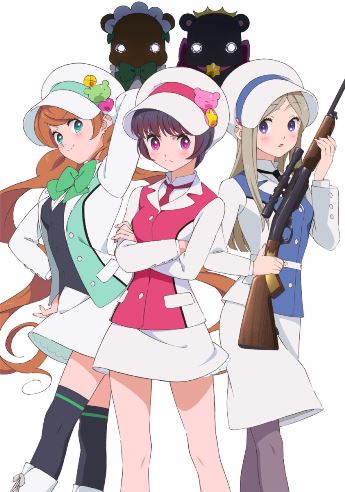 Is it a crime?

365 more days until the fated-kiss.

Actually, this anime, ‘YuriKumaArashi’ is the one that I’ve been looking forward to most.

The themes of this anime are ‘man-eating bear’ and ‘Yuri (a love between girls)’.

You might be a little scared of the subject matter and choose who you’ll watch...but,

guess what!  The director is ‘Ikuhara Kunihiko’ San. (σゝ∀・)σ！！

You don’t know ‘Ikuhara Kunihiko’ San?!  The anime which he has produced are just too famous! 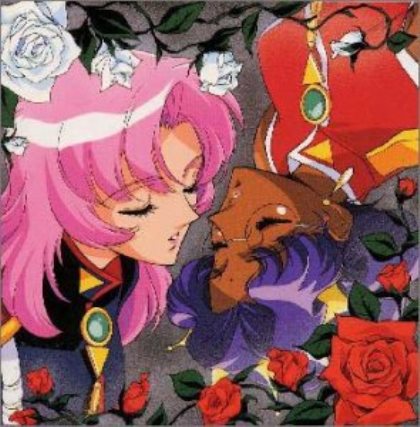 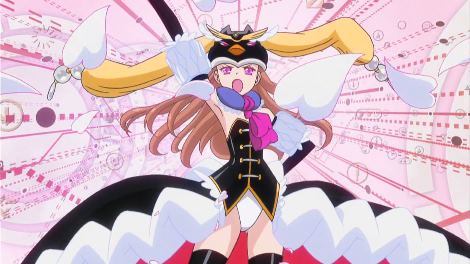 He is the one who was in charge of making a draft and directing anime, which have been passed by even now!!

This director who produces his own world view will make another anime this winter, 2015!

Even though it’s an original anime, its manga version already has been serialized since March, 2014!  The story is like this...

One day, a small planet floated in the universe, fell down to the earth, turning the fragment into meteorite.

Then all the bears in the earth got furious all the sudden and started to attack humans.

This is how the fight between humans and the bears started and it ended up building the ‘wall of extinction’ that separated them hating each other.

One day, Yurishiro Ginko and Yurikesa Ruru came to ‘Arashigaoka Academy’ in the human side as the transfer students.

But they turned out to be the ‘man-eating bears’ which disguised themselves into humans, beyond the ‘wall of extinction’. 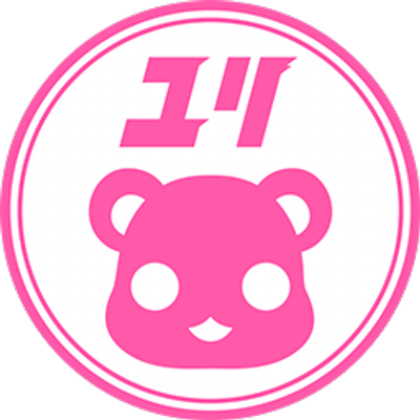 But I guess there won’t be any cruel description in the story as I know from the director’s work before!

The human confronting with bears and the bears eating human...  How are they going to have their futures?  It’s such an interesting anime!

“Just find it out, staying away from the transparent storm.” ------ Ikuhara Kunihiko

☆Fafner of the Azure -EXODUS-

What anime are you guys going to check after the New Year?  I (Saori) want to watch almost all the anime from Season 2, continuously!

I definitely want to watch the Yuri Kuma Arachi and Cinderella Girls until the final episodes, since I’m actually paying for them to watch!

Make sure that you guys choose what to watch after watching the first episode, ok?

Okayyy, I guess this is all for today!  I’ll see you guys soon!