※ Please note that this article contains some spoilers of a new event up until chapter 3 (around middle).

Hello, everyone. I’m thinking of setting up a vinyl pool in the terrace of my house and enjoying it this summer. I’m Otaku Republic’s Boss.

Hello, everyone~! I’m not planning on going out much this summer, either…… It’s Saori from Otaku Republic!!

Oki-doki! So! There’s one new and wonderful event underway, which will make us feel like we’re traveling! It takes place in Twisted Wonderland! What kind of story is it? I’ll share its outline of the beginning to the middle with you today!!

【Twisted Wonderland】
The New Event This Summer Is Fireworks!?
FIVE-Minutes, and You’ll Know What Al'ab Nariya Is Like!!

Already! Let me give you a rough outline of ‘the Land of Hot Sands' Fireworks・Al'ab Nariya,’ now underway!
As I said in the introduction, it contains some spoilers from the beginning to the middle so be careful!

Off to the fireworks festival in the Land of Hot Sands!!
All the main characters are heading for Kalim’s hometown, using their days off but…… 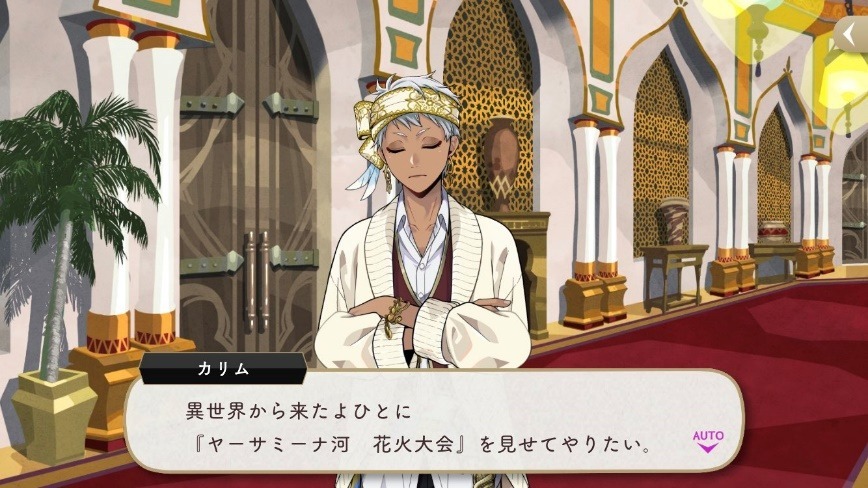 The story starts off when the main characters pass down Principal’s message to Kalim and Jamil.
It looks like Kalim and Jamil have to attend the traditional fireworks festival, Al'ab Nariya, taking place in hometown.
While talking, Kalim thinks about wanting the main characters from another world to enjoy the fireworks festival. And he decides to invite them along with the members of the music club, which Kalim belongs to since there are six seats available! 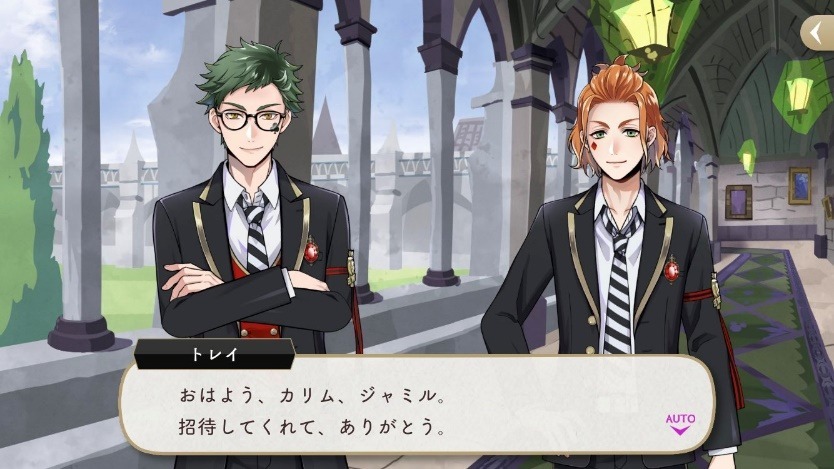 One of the members of the music club, Cater Diamond, willingly accepts the invitation.
He is told that he can invite one of his friends too so he picks Trey Clover, who has been interested in dishes and sweets of the Land of Hot Sands.
And Lilia Vanrouge, another member of the music club, is joining as well but…… 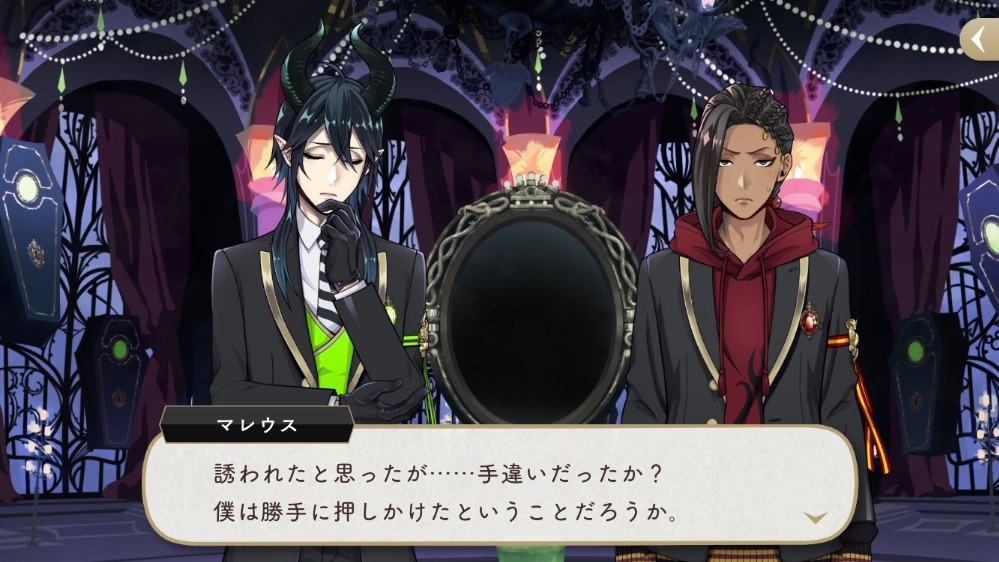 Guess what? Lilia has to give up because he unfortunately has a stomachache on the day, when the fireworks festival takes place……!
Instead, Melleus Draconia shows up at the meeting place! Since Malleus is the next King of a country called Valley of Thorns, where the fairies govern, if something happens, it will become a big problem internationally……!
However, Malleus looks forward to the trip so much that he has come to the meeting place three hours earlier than the designated time. Plus, since Malleus is the next King, he has neither been able to be invited by someone nor accepts such invitations.
Hearing that, Kalim makes a decision. He wants Malleus to enjoy the fireworks festival as a student and make good memories!
Jamil accepts it although he is a little concerned. This is how all the main characters start a journey to the Land of Hot Sands.

He waited for over three hours at the meeting place, huh? He’s so cute. It would be hard to turn it down for sure.

Well, I understand how Jamil feels since he has to take care of extra members, though…… But it’s always fun with many people when we go on a trip, huh?

Colorful and exotic town!
Enjoy a walk-and-eat tour in the Land of Hot Sands, dressed up nice!! 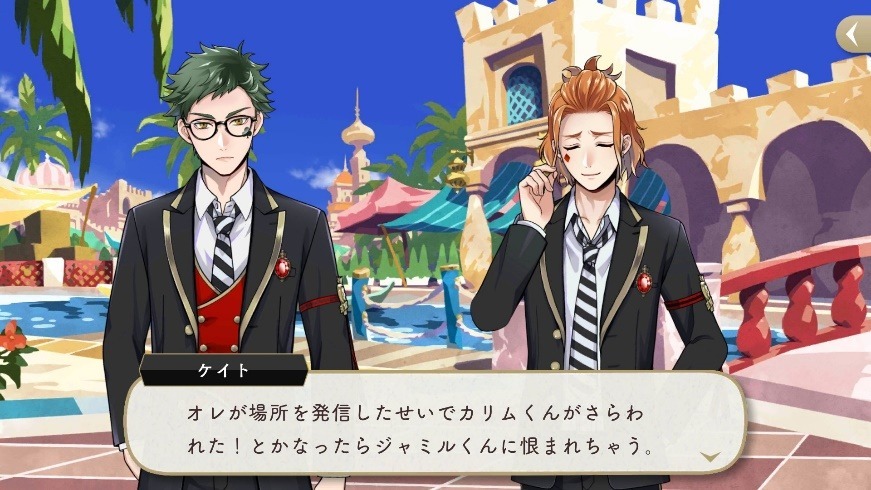 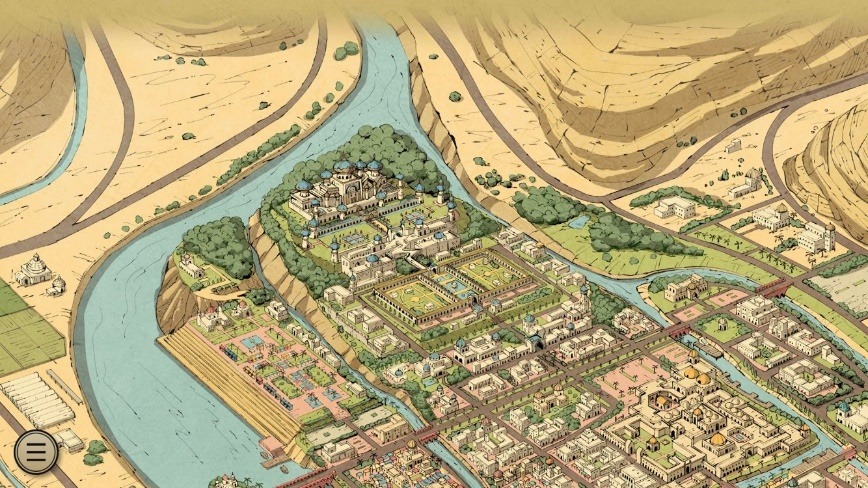 All the characters are invited to Kalim’s house and they change their clothes, which are the traditional the Land of Hot Sands’ costumes he’s got for them as a gift. 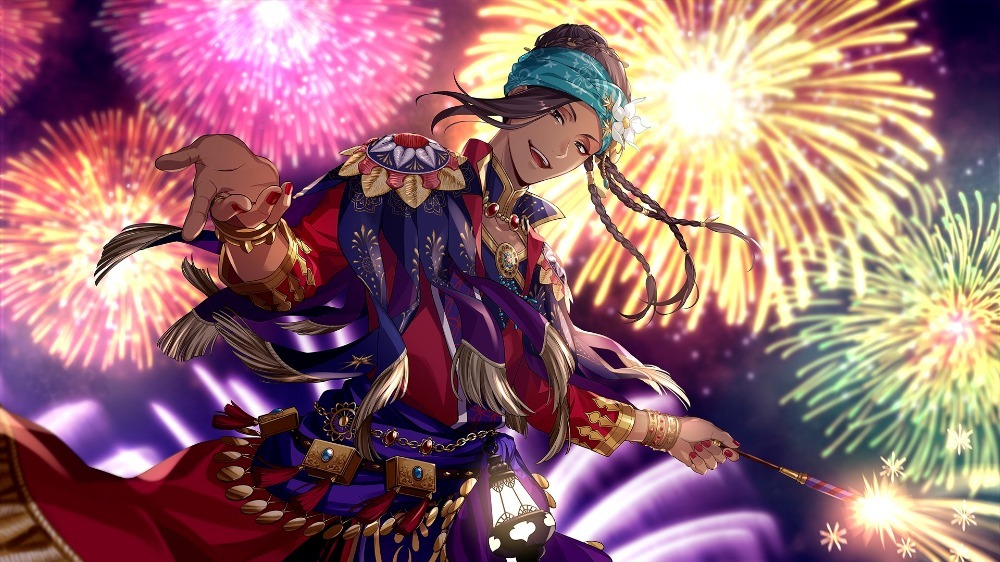 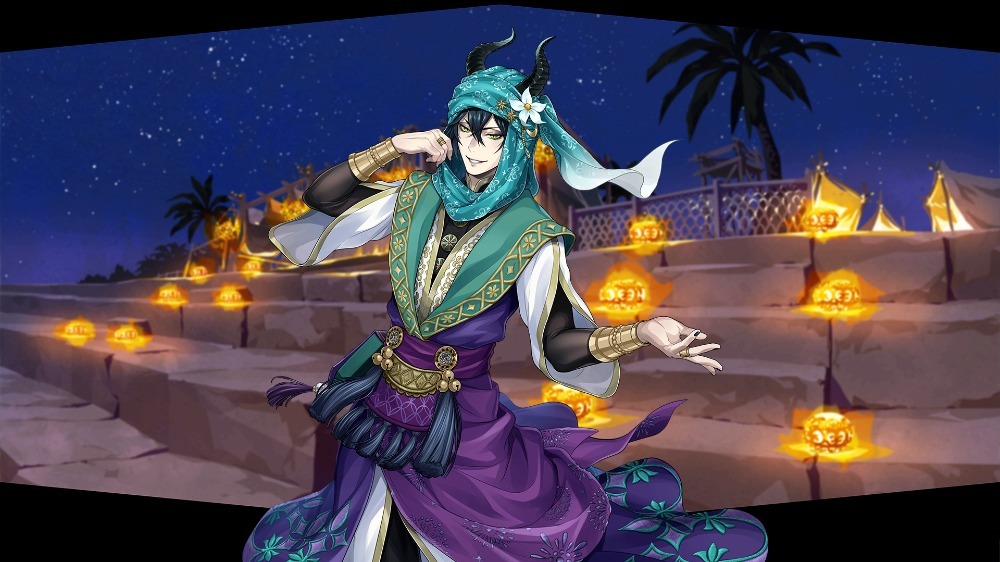 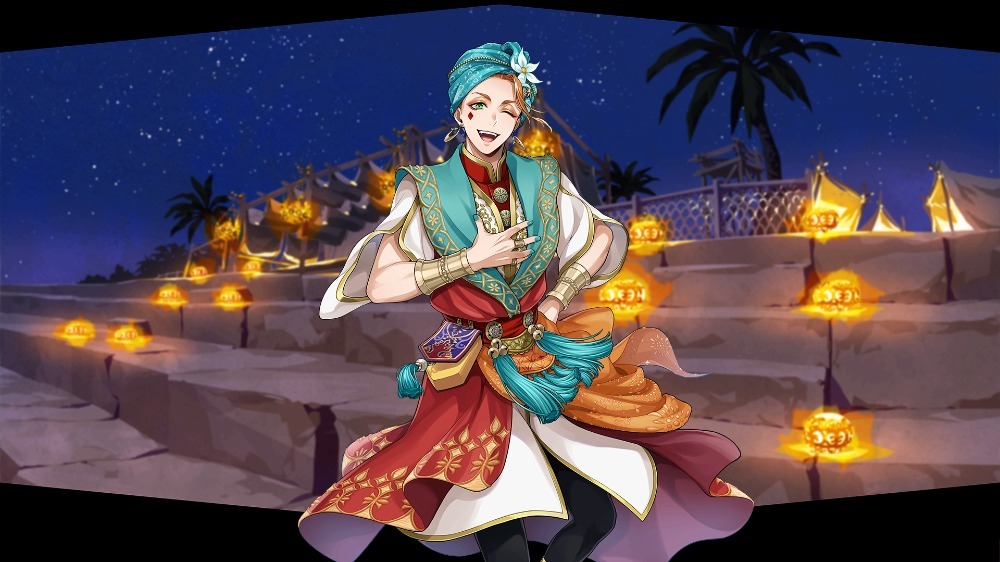 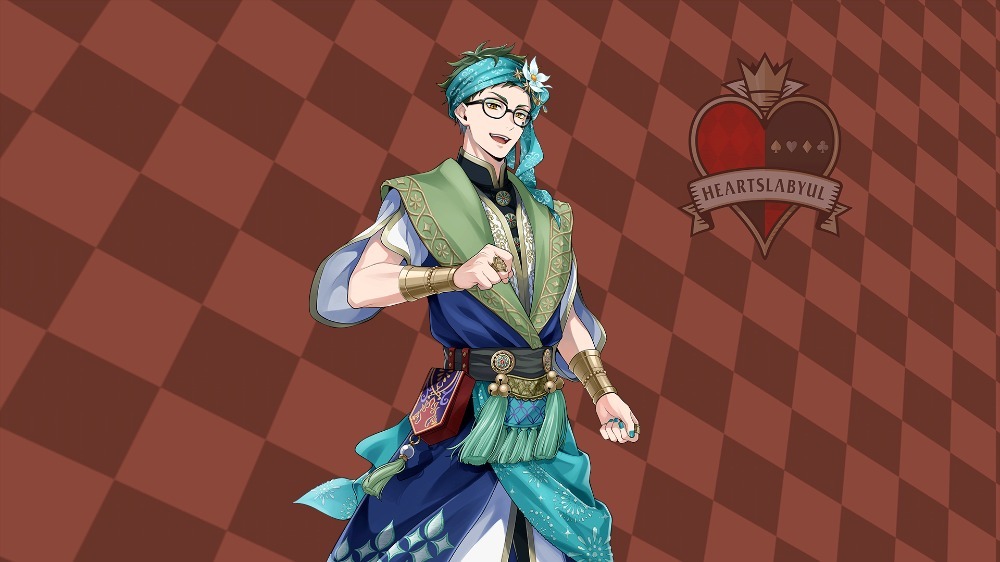 https://otakurepublic.com/product/tag_page.html?tags=713932
Trey Clover
Jasmine Silk
Once upon a time, there were a beautiful princess who really cared about people and a country and a boy who was poor but very kind. Getting over the difference in social position, these two got tied together forever. To celebrate their forever love, the lamp’s genie set off fireworks.
The fireworks festival originates from this story.
And the colors of the Land of Hot Sands’s traditional costumes which Kalim gives them are princess’s favorite colors. Also, the costumes come with a flower whose name is the same as princess’s name. 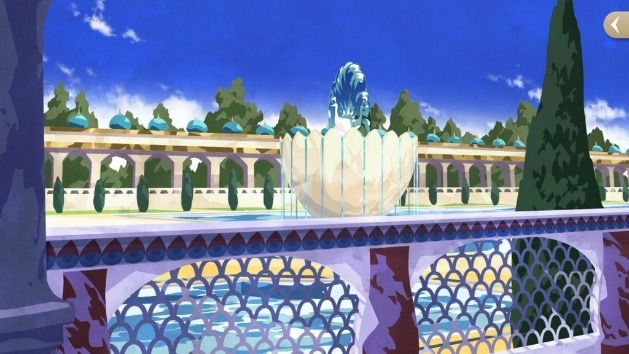 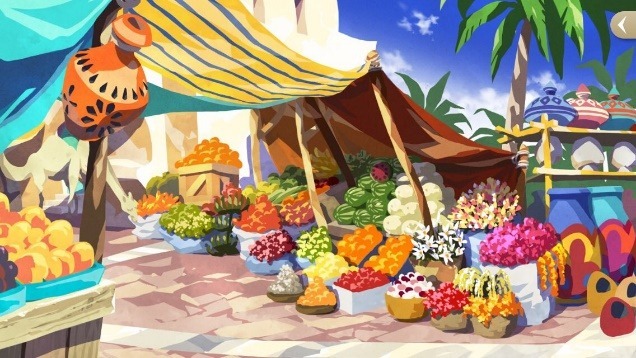 After they are dressed up, they go sightseeing in the Land of Hot Sands until the fireworks starts.
They see bazaar, full of colorful china or clothes, a market with delicious-looking food and a well-maintained park which they can feel cool…… All the characters are having a fun time while Jamil is showing them around but……? 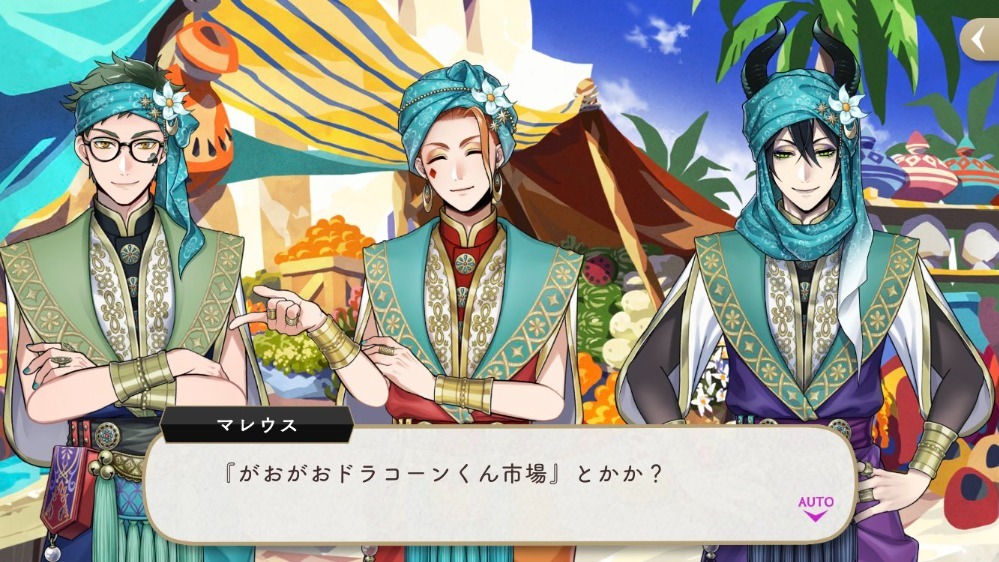 These…… beautiful princess who cares about people and a country, and a poor but kind boy are……

Yes! They are Aladdin and Jasmine who appear in one of the Disney works, which has also become a motif of SCARABIA dorm, which Kalim and his friends belong to!!
Since Twisted Wonderland is a game where you see some motifs from the Disney works, we often see this kind of homage! 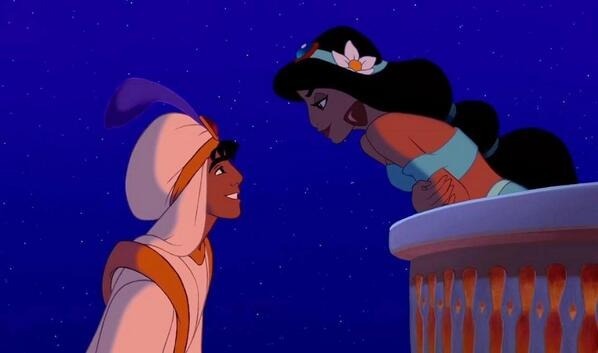 We didn’t share this time but you see more homages of Aladdin here and there in the sightseeing spots too! Well, what’s gonna happen next……? 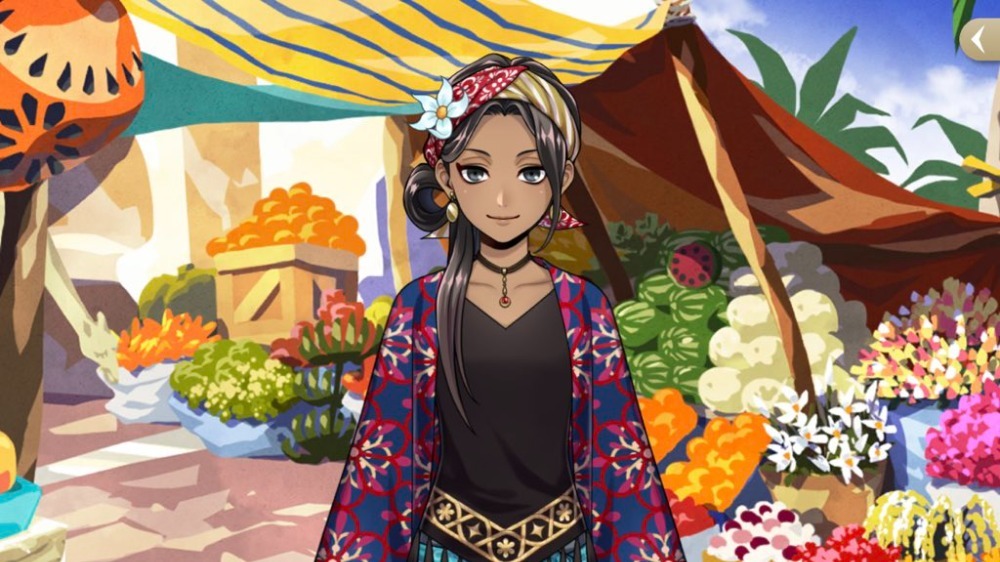 “Welcome back, Jamil!”
Guess what? They run across Najma, Jamil’s younger sister!
It looks like she comes there to give them a message from Jamil. Then she ends up sightseeing with them but…… Jamil seems a little complicated. 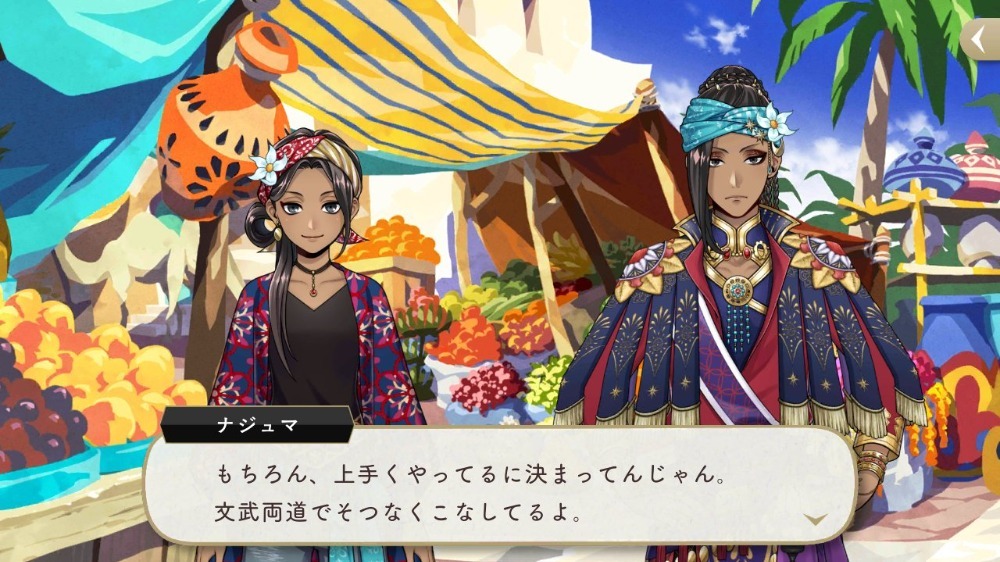 Najma-Chan has such a good personality~!! While being cheerful, friendly, and a little selfish (only to her brother, Jamil), she is adorable, just like ‘a little girl, close in age with his older brother’-chara! And! When she narrows her eyes, she was just like Jamil, which made me laugh. 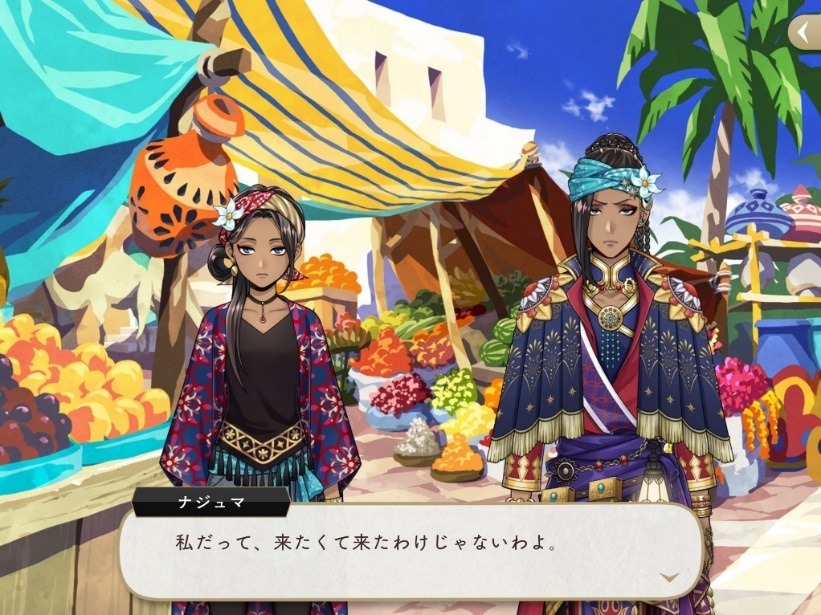 Yep, they are identical.

While Najma-Chan has a little sharp tongue towards Jamil, she seems to be looking up to him at the same time. Being good at both sports and studies, never forgetting that she is ‘Jamil’s young sister’…… she seems to be living her life enjoyably.

What a great sibling relationship.

However, an incredible thing happens at the end of this chapter. 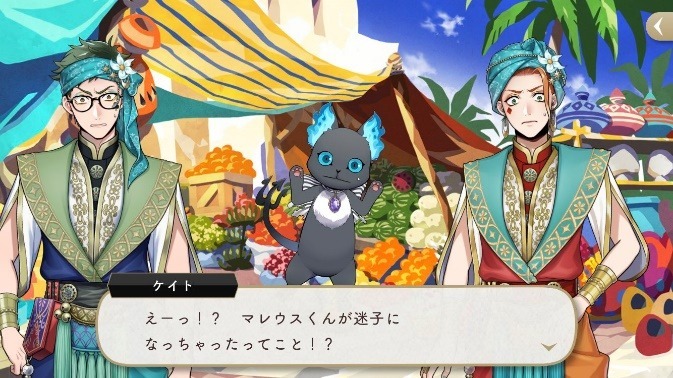 Are all the main characters going to have a wonderful fireworks festival!? Why don’t you go watch the rest of the story on TV??
Now OVER 10,000!!
Check HERE for Twisted Wonderland’s Doujinshi, Doujin Items!!

Alright! This is all for today! We’ll see you all at the next article!
Bye now~!
Twisted Wonderland, Jamil Viper, Malleus Draconia, Trey Clover, Cater Diamond