Hello, everyone. You know what? Episode 1 of Love Live! Superstar!! was so awesome so let me share a little about it here. I’m Otaku Republic’s Boss.

Hello, everyone~! True!! That was so…… awesome~! I can’t wait to watch Episode 2, either! It’s Saori from Otaku Republic! 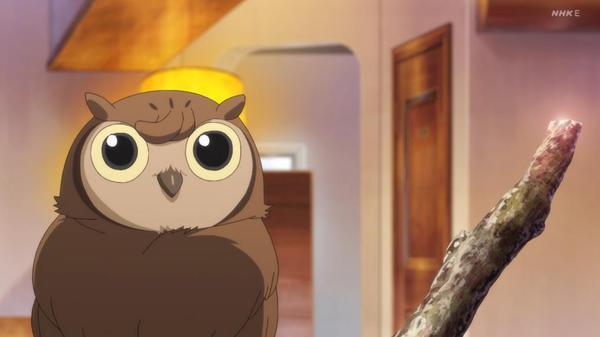 Yep! A little round and cute creature you should love was there too, huh, Saori? I mean…… it was so awesome. It’s got a good pacing and above all, it made us want to cheer them up more!! So today, let us share how attractive it is while reviewing Episode 1!!

【Summer 2021 Anime】
It Was the Most Awesome Episode of All Summer Anime Series So Far (By Boss)!!
What’s the BEST Part about Love Live! Superstar!!??

The story starts off when the main protagonist, Shibuya Kanon, experiences a setback. 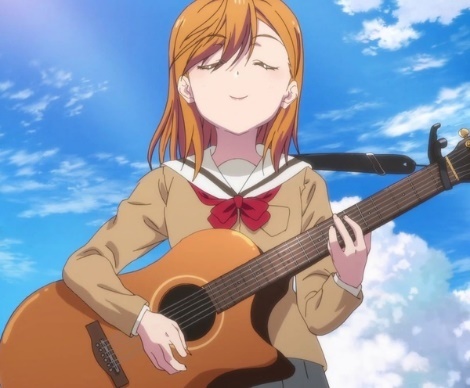 The main character, Shibuya Kanon-Chan, loves to sing. In her junior high school days, she belonged to the chorus club, and applied for Yuigaoka Private Girls High School, which was newly established as a music high school and took the entrance exam but…… 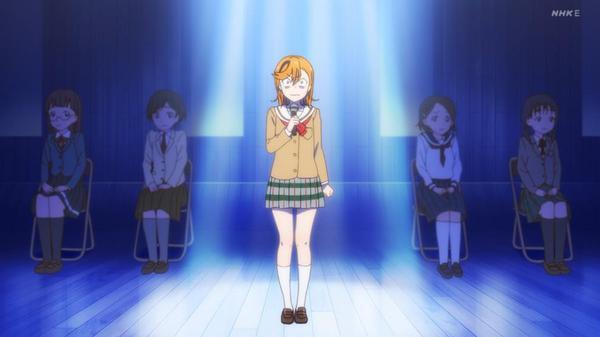 She tends to become too nervous to sing especially when she is in front of people or when she has special moments. Well, it wasn’t the exception this time, either, huh? She didn’t pass the singing exam, ending up getting in the regular department, instead of the music one of Yuigaoka Private Girls High School. 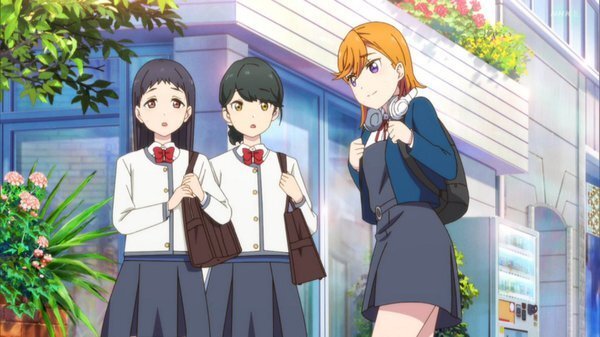 Isn’t it so rare that the main protagonist of Love Live! suffers from this big setback? The characters playing this role are usually the ones who lead other people cheerfully and energetically…… I felt sorry for her when I saw her talking with her friends who passed the music department …… 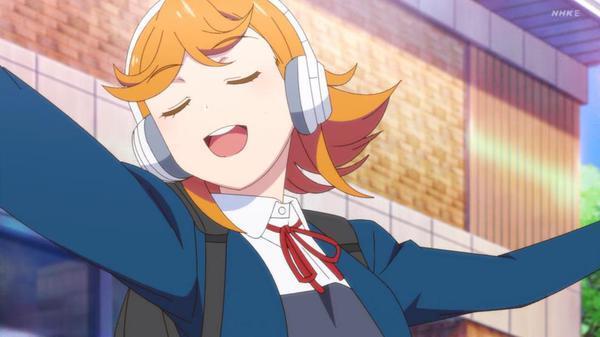 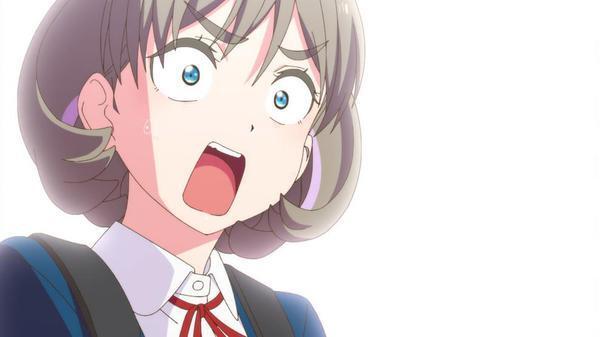 I loved how Keke-Chan looked in this scene. It was so funny!

Well, no wonder…… Keke-Chan came to Japan as an international student because she was attracted by a Japanese ‘school idol’ culture. She must have gotten so shocked to hear Kanon-chan singing so beautifully right in front of her! 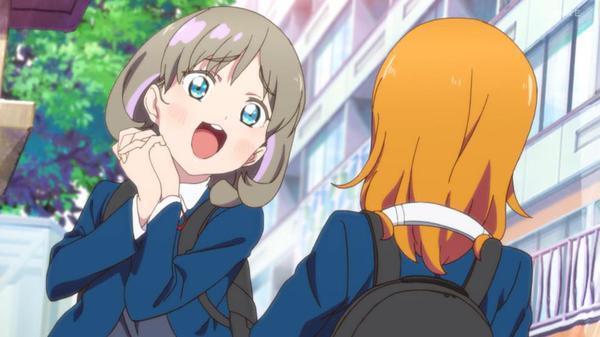 “Love” to sing but “not for me”…… Kanon-Chan struggles with dilemma. 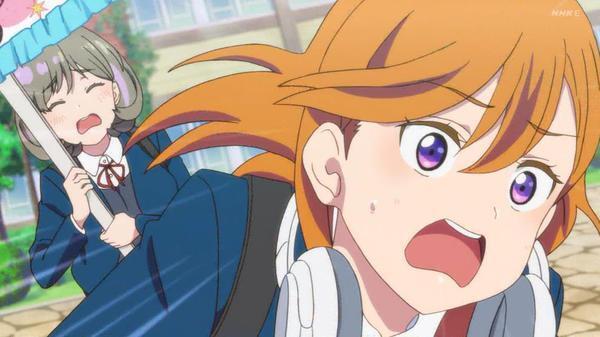 After Keke-Chan saw her singing, she passionately asks Kanon-Chan to work on school idols together! While Kanon-Chan is trying to refuse that offer…… a girl named Hazuki-Ren-Chan shows up in front of them. It looks like she doesn’t like them secretly doing (actually they’re not doing it yet) activities as school idols at school. 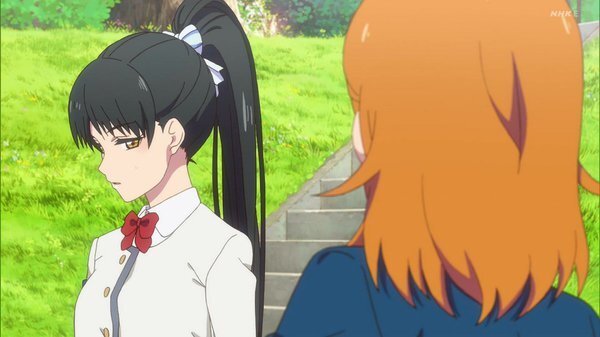 She looks like the president of the school council.

We don’t know if she is but she is a daughter of the principal of school.

The presidents of the school council in Love Live! are usually strict and against the school idol’s activities (at least at first), huh? Well, since she’s wearing a white uniform, she must belong to the music department, though…… 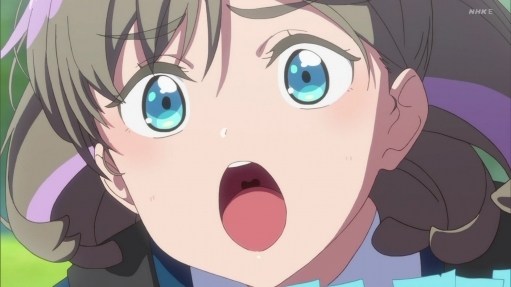 “Who would get rid of something you like to do?” 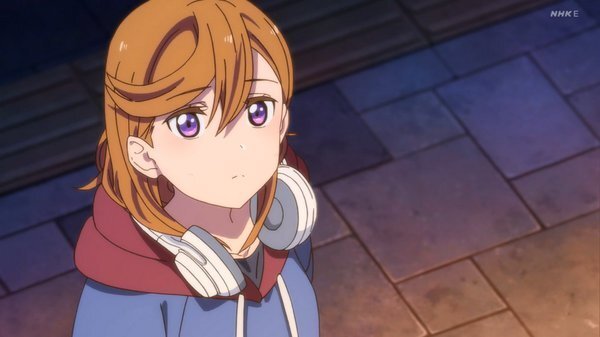 Hearing Keke-Chan’s words, Kanon-Chan doesn’t know what to do. I love to sing but it’s not for me. Kanon-Chan, then tries to look for some other members who want to join the activities, wanting to support Keke-Chan but…… she can’t find anybody. What’s worse, they are sill being watched by Ren-Chan. 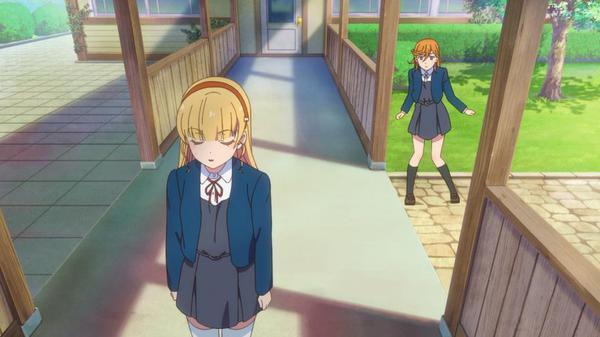 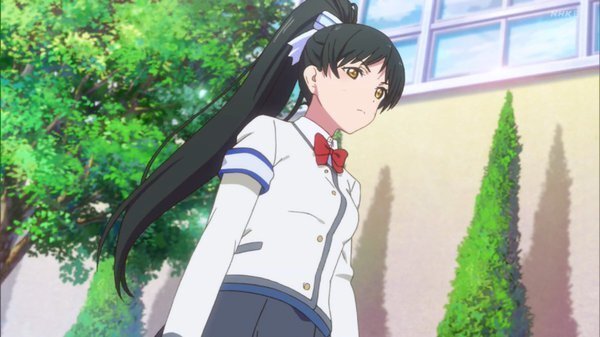 Look how scary Ren-Chan is. 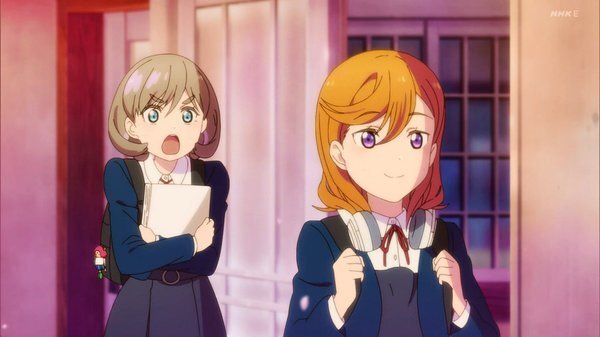 Keke-Chan, once again, asks Kanon-Chan if she can join the school idol activities with her. Then Kanon-Chan, again, gives her ‘NO.’ What if I could not sing in front of people? I would trouble other members. Above all, I would be disappointed at myself not being able to sing. While Keke-Chan encourages her, Kanon-Chan pushes her away abruptly. 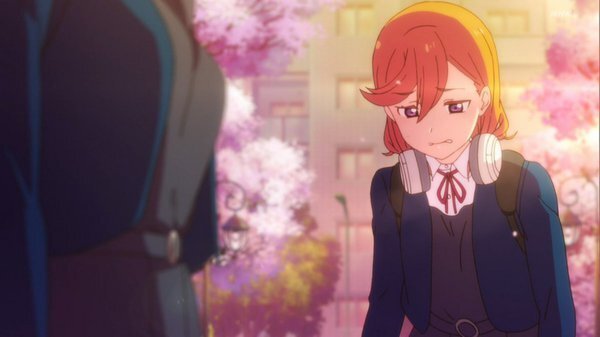 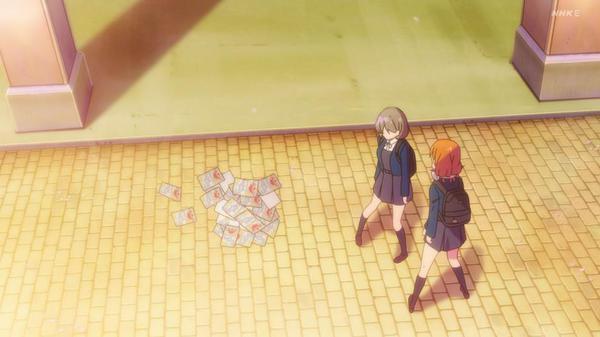 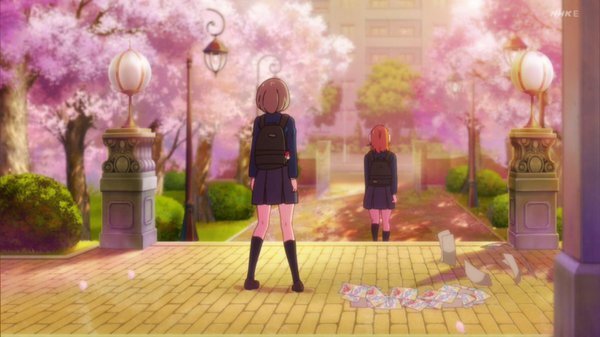 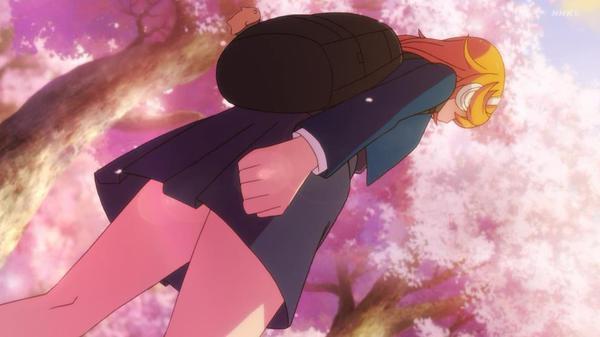 I totally understand how both of them are feeling…… She wants to cheer her up but she understands herself who is not confident to move on, more than anybody else……

Regretting having pushed her away, Kanon-Chan leaves there…… Keke-Chan said she liked my singing and asked me to do the school activities together…… Is there no way I can accept Keke-Chan’s passion……?

I want to change myself! I want to accept her passion!
The story of Kanon-Chan who takes a step forward, now gets moving! 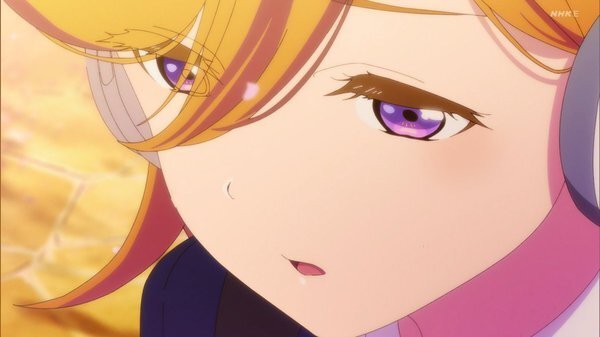 Kanon-Chan asks that to herself…… Well, singing might not be for me. But……!! 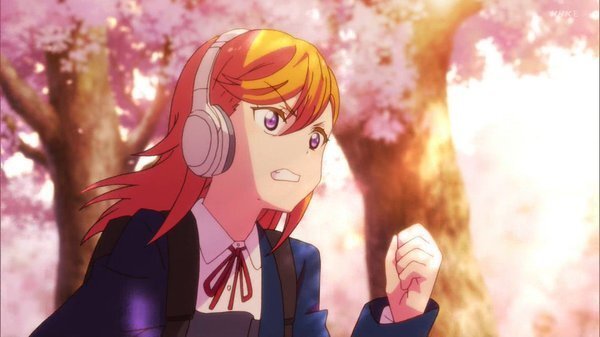 I want to change myself. I want to sing. I love music!! I just cannot lie anymore!!!
Kanon-Chan runs quick back to Keke-Chan and says!!
“Actually, I think I love to sing!!!”

When I saw a white feather which is a special item for Love Live!, sticking out of the backpack’s pocket mixed with cherry blossom’s petals, I felt so moved…… It made me want to cheer her up even more. Good luck, Kanon-Chan!! 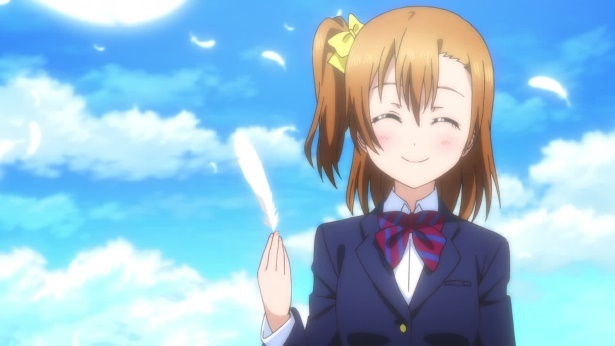 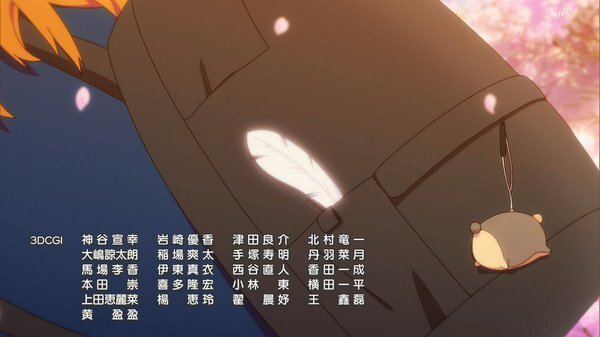 The next episode is…… The school idol activities are prohibited!?
Can’t wait, hu?? 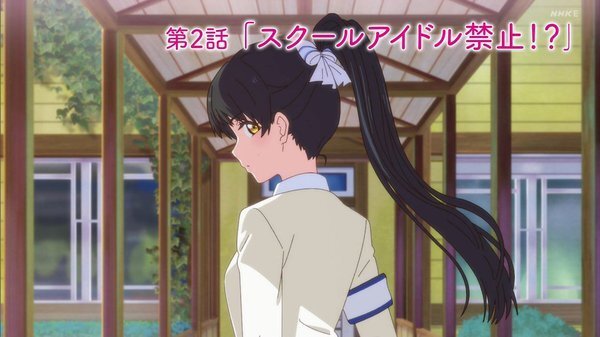 Well~ it was such a great episode. It looks like the members will be five. Since it’s the school newly established, they have neither senpai nor the ones junior to them. Above all, the story starts off from the main protagonist’s setback. I’m so excited to see how the story (which is quite different from the previous series) will be developed next!

The best parts about this series were that the story had a good pacing and it was easy to understand! 30 minutes passed so quickly! It made me want to cheer up all the characters too…… How is the story going to end up? Can’t wait!
Check HERE for Love Live Series’ Doujinshi and Doujin Goods!

Anyways, I really want to recommend this to many more people! Good pacing and easy to understand! Above all, it makes us want to cheer them up! Hang it there!! It was such a lovely series……
For those who haven’t watched it yet, go check it out now! It was super awesome!

Already! This is all for today! We’ll see you all at the next article!!
Bye now~!!
Love Live Series, Love Live! Superstar!!