Hello everyone~! The manga series, which we’ll be featuring today is one of the Jump series, which just announced its anime adaptation when it came to an end the other day! But actually, I really don’t know what kind of story it is…… So we’ll feature this series today so we can learn it too! 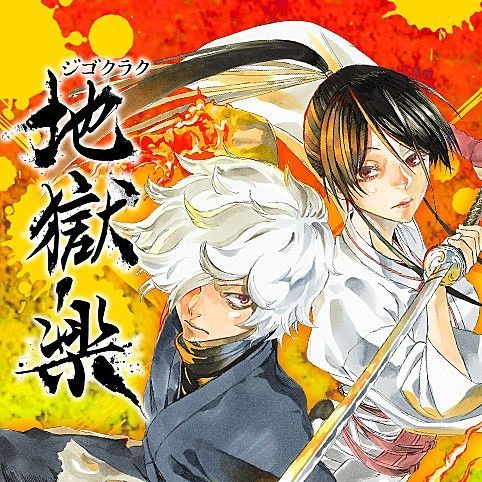 What Is Hell's Paradise: Jigokuraku?

It’s a Japanese manga series written and illustrated by Kaku Yuji-Sensei.
It was serialized weekly for free on the Shonen Jump+ application and website from January 2018 to January 2021 and is now concluded. 127 episodes in total were issued and when it came to an end in the website, it announced its anime adaptation.

I didn’t know but ‘Jump+’ which is a manga website, is full of masterpieces?

Yes, it is~! We can read some long-hit masterpieces from Jump for free, or we can read spin-off series of Haikyuu!! or Boku no Hero Academia (My Hero Academia) too! As of February 2021, some series such as SPY×FAMILY is being serialized!

Wow~! It looks like various series have been serialized there, huh? Since it’s not a physical magazine, there might not be a limit of how much they can issue, which might be one of the best parts about the website platform, huh? 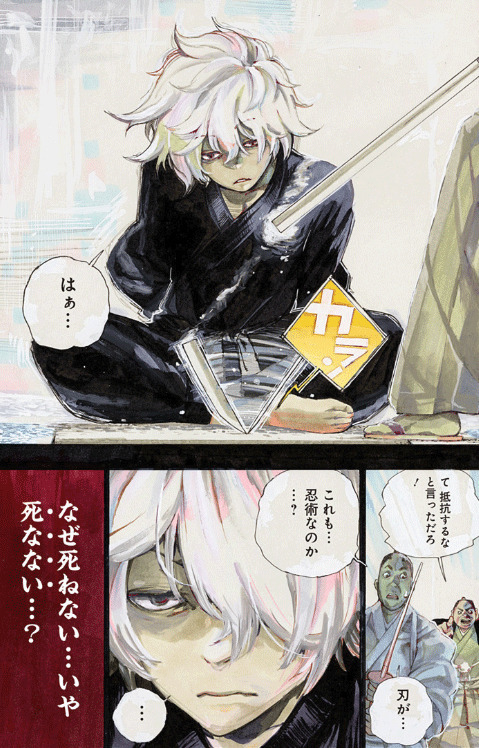 It’s a story about an immortal ninja, Gabimaru, going on a trip to look for the “elixir of life” to become innocent and acquitted.

I see violent element from the beginning.

The story starts when a ninja, Gabimaru, was executed, trying to get cut by his neck. However, the sword somehow got broken in half and he ended up alive. Even after that, they tried to kill him but somehow, he remained alive. 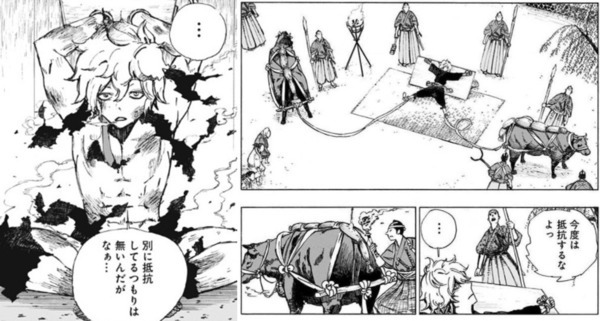 Gabimaru is a pro-ninja and has completed various missions.
The reason why he got caught is because he left the ninja village and tried to quit being a ninja.

It looks like a member of ninja found out that he has left the village, betraying all his members. The member reported it to the police.

Wow. He got executed as soon as he got caught, huh? That means he might have accomplished so many missions. And it’s surprising that he would never die no matter how they tried to kill him, huh? He’s literally immortal?

It looks like he does have a reason why he would never die, I mean…… why he cannot die yet……!
One day, Gabimaru was admitted by the ninja chief and Gabimaru got his daughter as his wife, which was the beginning of everything and the cause of everything. 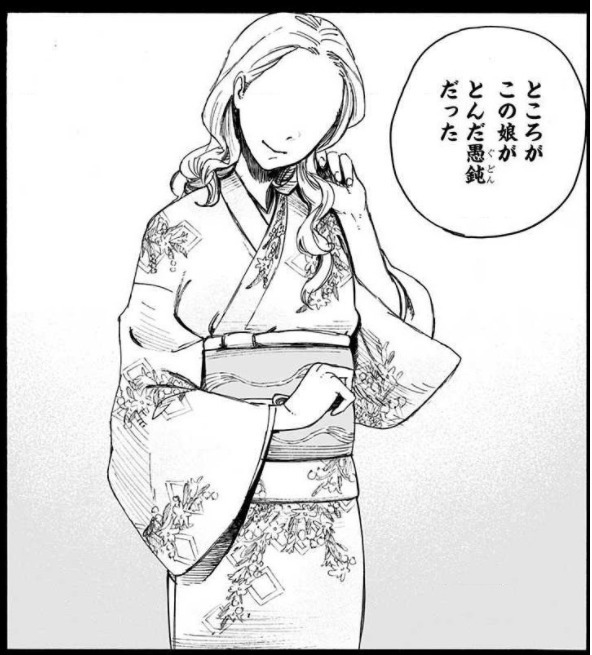 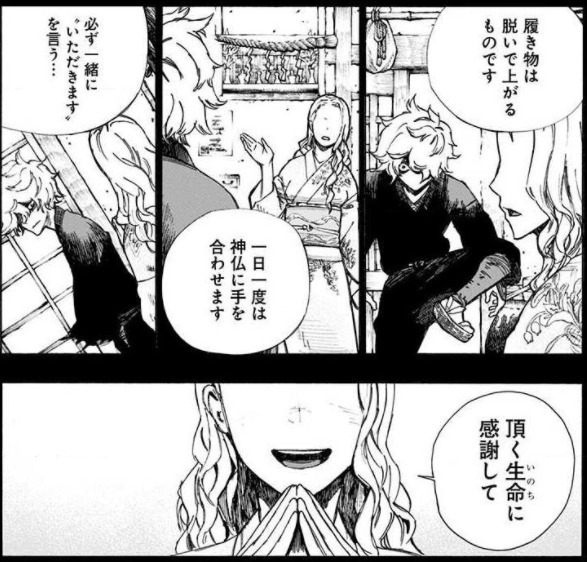 His daughter was just a ‘normal girl’ who never looks like a daughter of the ninja chief. She is kind, calm and always cares about peoples’ lives. On the contrary, Gabimaru has cruelly killed people, which is his normal life. Yes, they have lived in completely a different world. 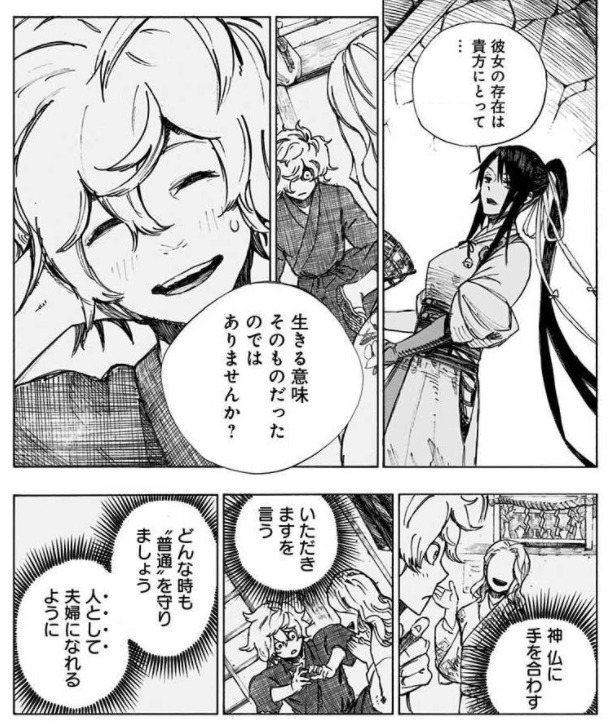 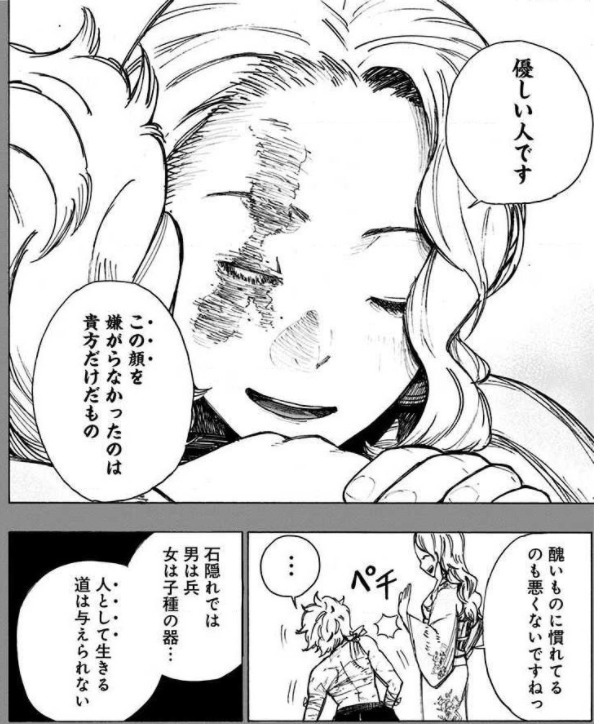 That’s why Gabimaru is attracted by her. In ninja village, men have to be a warrior and women have to be a ‘tool’ to give it a birth to the babies. But that’s why she wanted her life to be ‘normal.’ She got her face burned by her father and could no longer have a life as normal girls had since her childhood. Still, Gabimaru accepted her as his wife, which made her so happy. 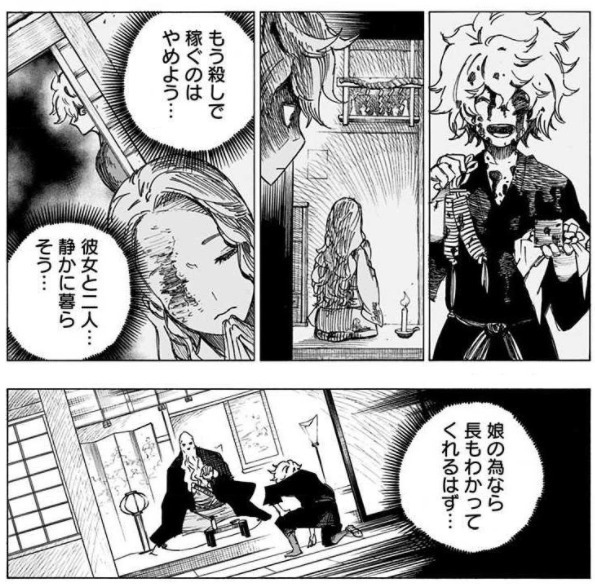 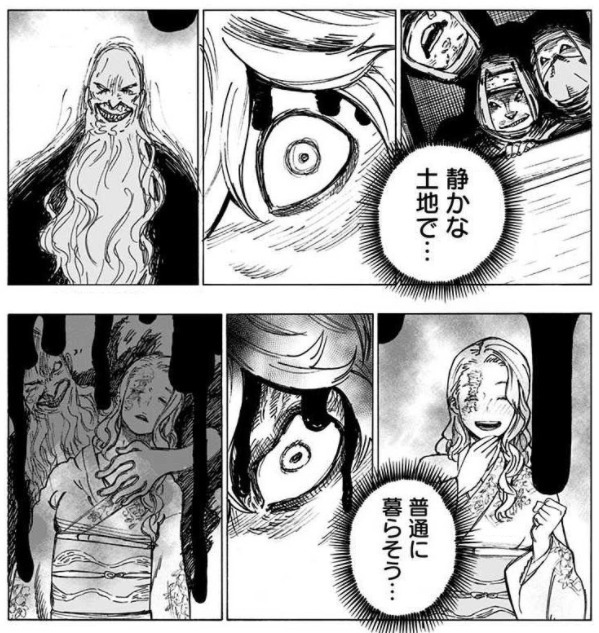 As Gabimaru starts to live with her, he wants his life to be ‘normal’ too. He starts to think that he wants to quit ninja and live with her quietly, instead of making money from killing people…… He believes that her father will understand that for her own daughter. However, what he got was betrayal from his buddies and chief……!
There’s only one way that Gabimaru becomes innocent and acquitted.
To find and bring back the “elixir of life” on “Shinsenkyo,” a legendary realm recently discovered southwest of Ryukyu Kingdom. 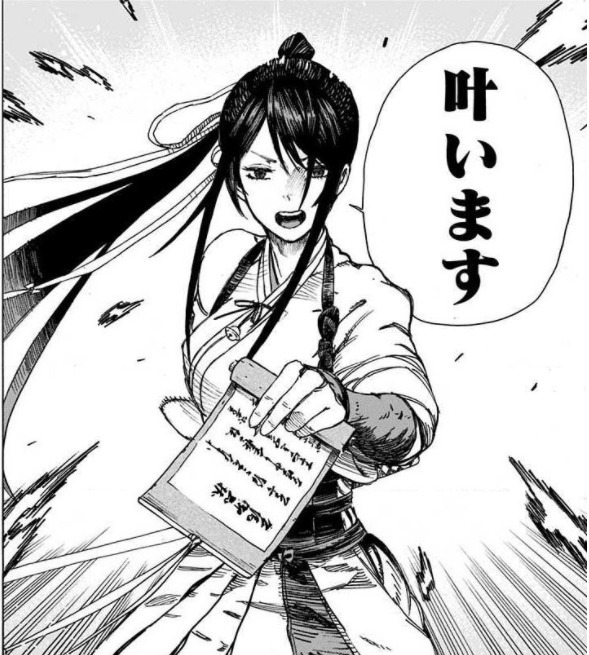 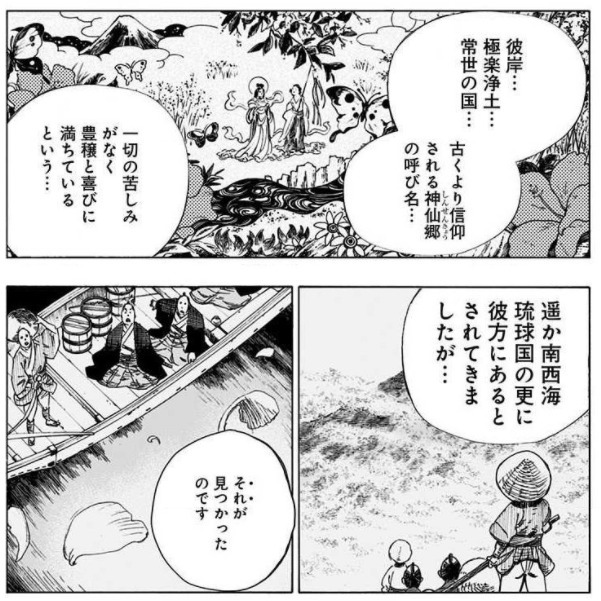 The executor, Yamada Asaemon Sagiri, perfectly figures out Gabimaru’s regret and past. And she feels certain that he is the best ninja for this secret mission by the government from his immortality and vitality. 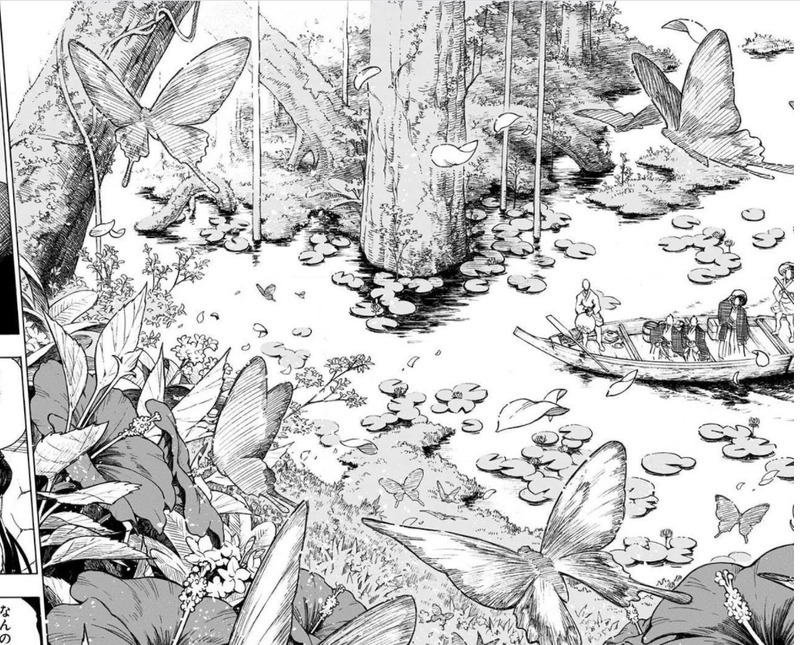 It’s a mysterious island, discovered in southwest of Japan.
It’s where birds tweet, full of colorful flowers and butterflies. It’s like a legendary realm, “Gokuraku Joudo (paradise).” Therefore, the government figures out that the “elixir of life” could be found there. Then they send the investigators there but…… 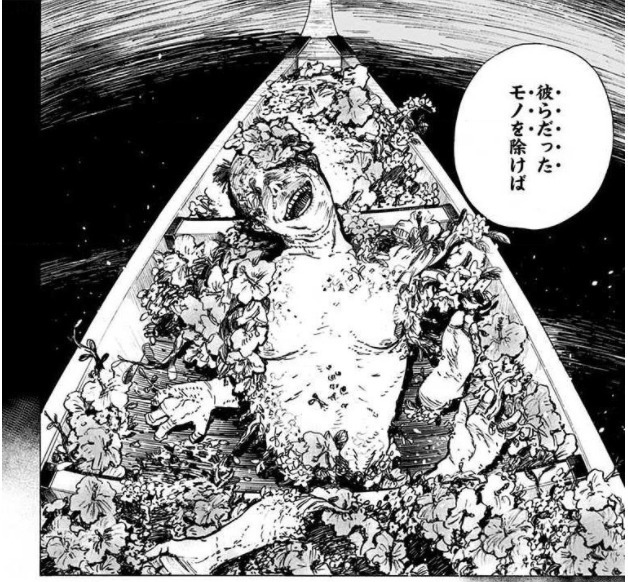 They have sent the investigator five times and the results were all the same. The ship was sent back with “their bodies” full of flowers.
Then the government has decided to select “the one who can die and who would not die” for the sixth trial. The best investigator of this was Gabimaru. 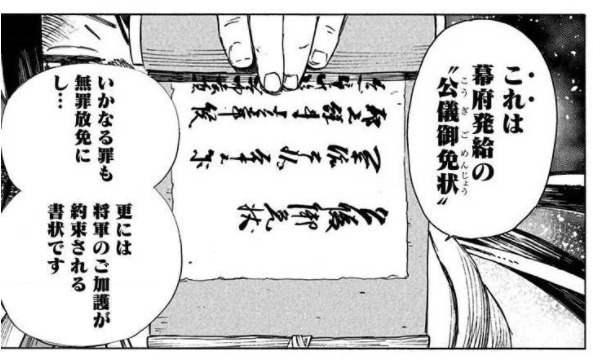 If he can make it and bring back the “elixir of life,” he can be acquitted for any crimes and he will be guaranteed to live safely in society for good. Once he gets it, Gabimaru is able to have a “normal life” which nobody can interfere.
Gabimaru finally decides to find and bring back the “elixir of life” for his wife, who will be waiting for him. What is his destiny going to be like……!? 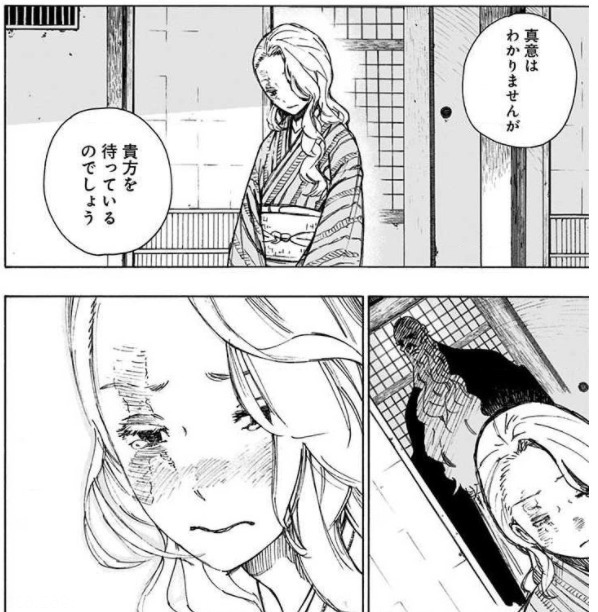 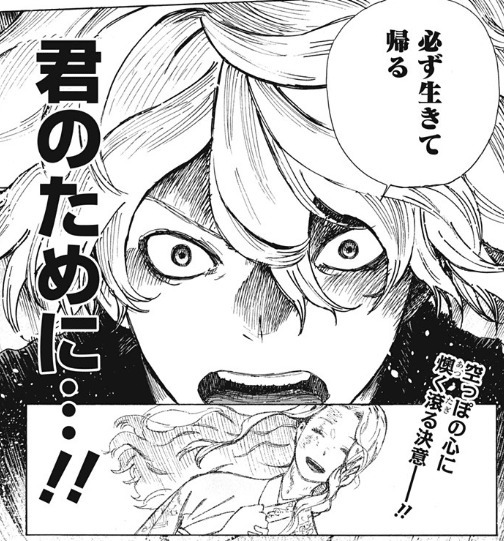 Wow, it’s a classic type of shonen manga! The illustrations are so pretty too……!

The story has already come to an end in January 2021 so…… why don’t you check out how Gabimaru will end up……? Can’t wait for the anime too, huh~?
Hell's Paradise: Jigokuraku
▸

You can check it through manga or you can wait for anime to air too! Feel how attractive Hell's Paradise: Jigokuraku is~!

Already! This is all for today! We’ll see you all at the next article!
Bye now~!
Hell's Paradise: Jigokuraku