Hello everyone. Speaking of England, I would say it’s a rock band, Beatles. It’s such a stylish country and I really want to visit there some day~. I’m Otaku Republic’s Boss.

Hello everyone~! Speaking of England, I would say it’s Sherlock Homes! Also, the anecdote of the Jack the Ripper, is famous too! It’s an exciting, thrilling and nice county, full of mysteries, to me~ It’s Saori from Otaku Republic! 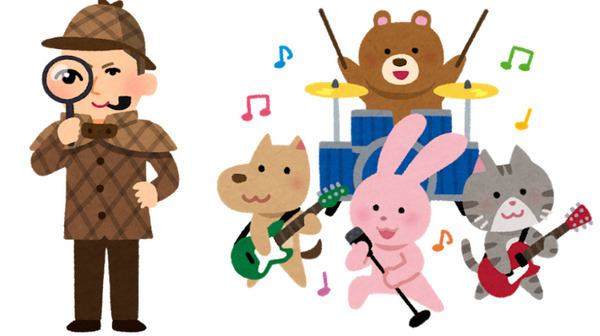 Aaand! The series which we’ll be featuring today is about England too! It’s such a lovely manga series, which is now celebrating its 15th Anniversary this year!
…… For those who have visited Otaku Republic, you might have heard of it, right? It’s such a famous series!

【15th Anniversary】
2021 Is the Year of Black Butler (Kuroshitsuji)!
Let’s Look Back On 15-Year’s History and Predict What’s Coming Up Next! 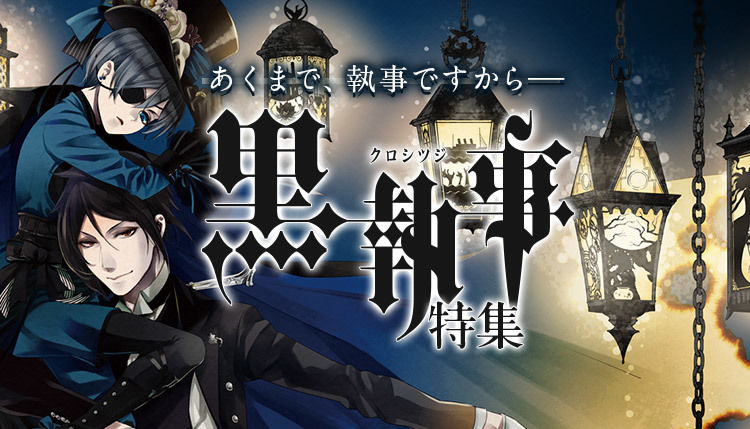 What kind of story Is Black Butler (Kuroshitsuji) in the first place? 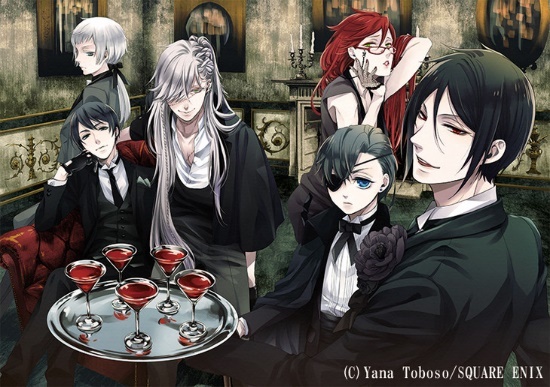 Yep. I know Black Butler by name but I really don’t know what kind of story it really is. I only have knowledge, where a butler dressed in black suit plays such an active role…… 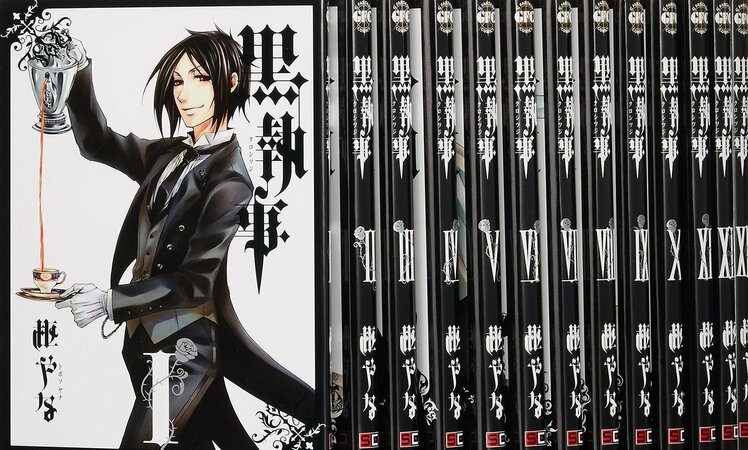 Right…… Let me give you a quick outline……
The story is set in England at the end of 19th century.
It’s a story about a noble boy, Ciel Phantomhive and a Black Butler, Sebastian Michaelis, who secretly accept the missions by the Queen of England and solve mysterious cases that occur in the underground community. 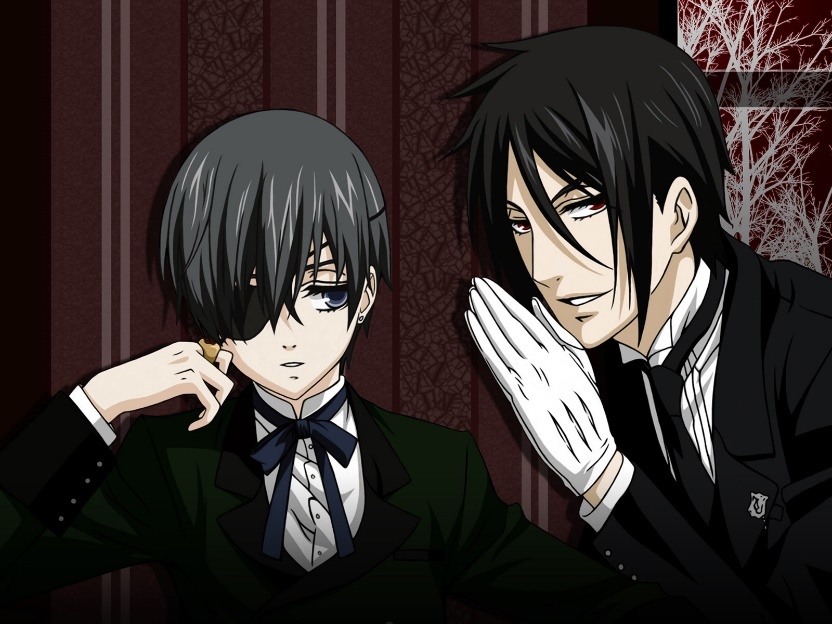 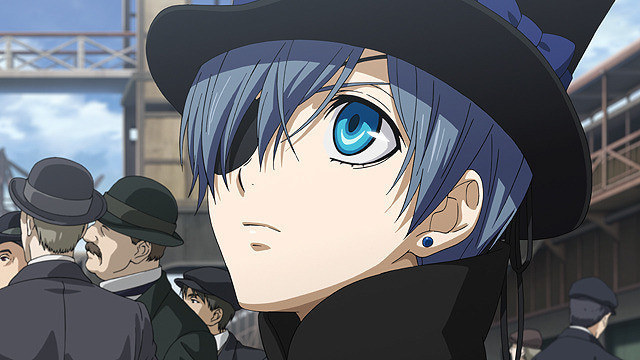 Ciel is the son of the Phantomhive, which is an Aristocrat Evil. He has lost his parents when he was a little and is now a 14 (13~15)-year old boy, who has taken over his parents’ enormous inheritance and firm.
Not only the inheritance but he has also taken over the mission which his family has taken over in generations, where ‘they secretly accept the missions by the Queen of England and solve mysterious cases in the underground community, as a watchdog’ which he does in this story!

Wow, he’s that young, huh…… I thought he was older from his mature personality……

As the story goes on, he gets older, though. But anyhow, I’m sure that he is not old enough to be the president of a big toy company and a watchdog of the Queen of England. It’s his butler, Sebastian Michaelis, who will support such a busy boy, Ciel.
Sebastian Michaelis 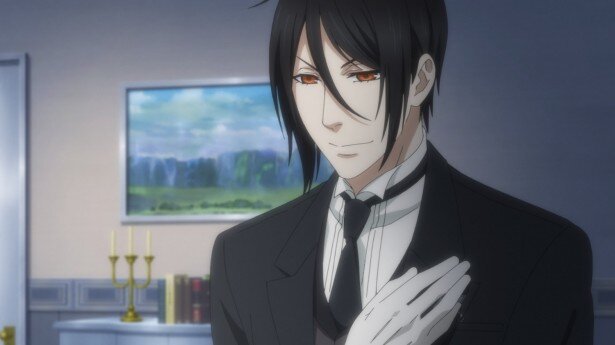 He is the one; Black Butler (Kuroshitsuji), huh?

Yes. He is a key person who’s in the title of this series too. While he is a little sarcastic, he is very polite and loves cats. He is a perfectionist, who completes any kind of orders, being very calm! He faithfully follows Ciel’s orders but he is sometimes a little sadistic boy, who makes fun of Ciel too. And the true color is…… 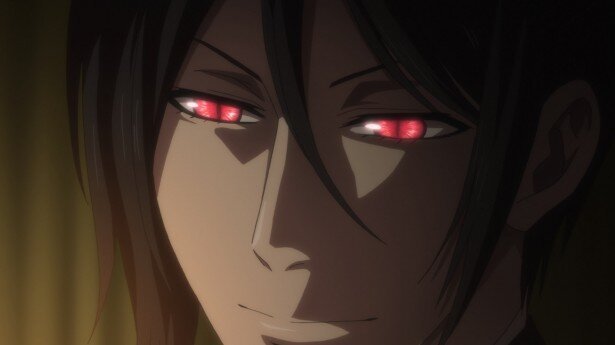 The true devil who made a contract with Ciel!

Actually, Ciel’s parents were murdered by someone and Ciel was sold into the association who worshiped the devils. When he was about to be offered as a sacrifice…… Sebastian was summoned, hearing Ciel’s voice.

He is the devil but loves cats, huh……? 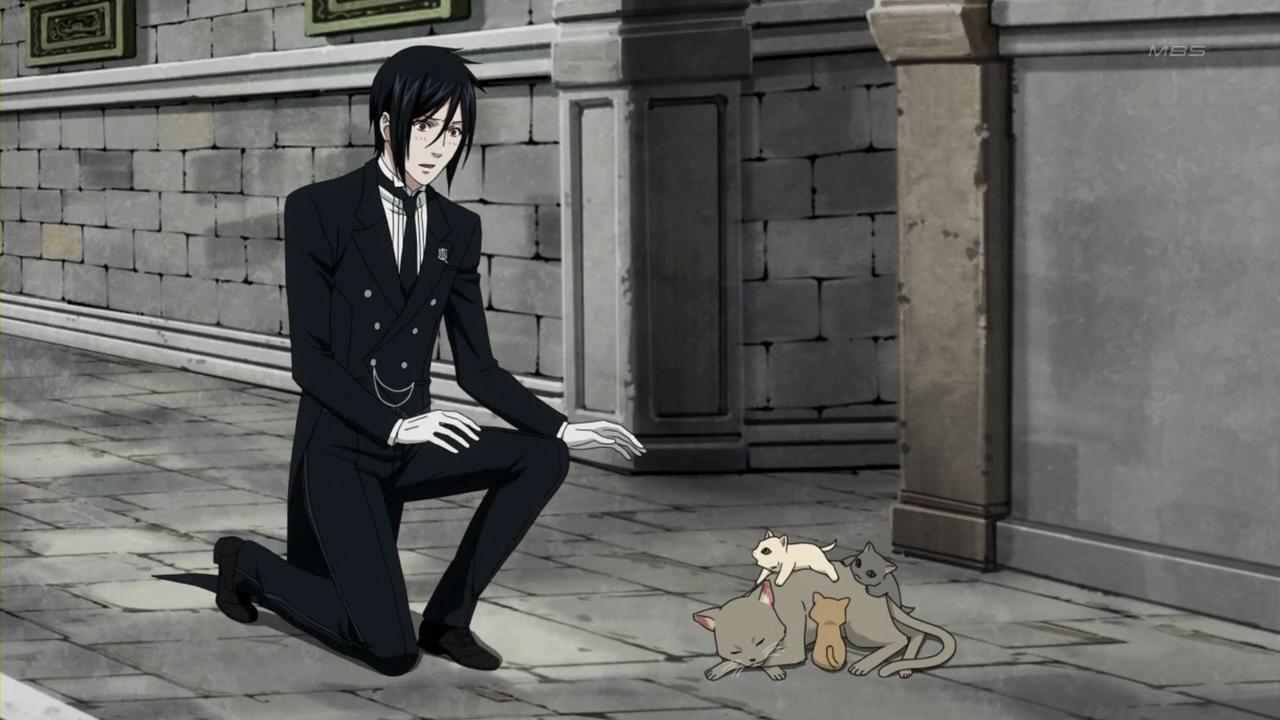 So, while completing Queen’s missions, they try to find those who murdered Ciel’s parents……! This is a quick outline about the story! 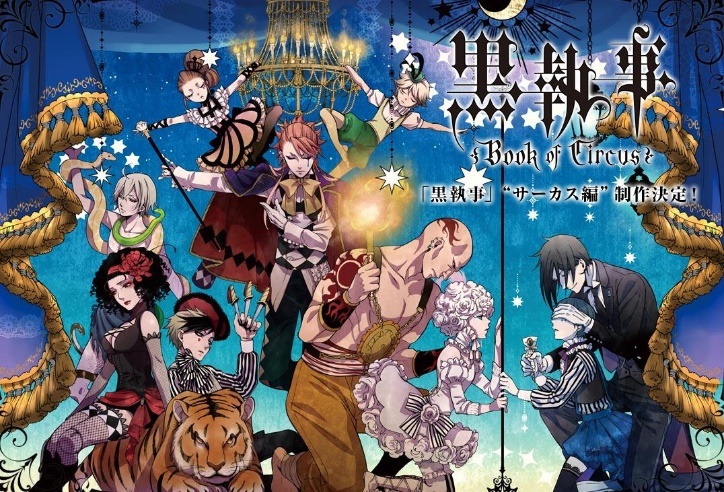 The secret of popularity of Black Butler is this unique Gothic-style, I guess. The story itself has full of mysterious element, where various mysterious cases occur in England and they chase the mystery of his parents’ murderer, which thrills us a lot. When we find out the truth, we get shocked! It’s such an awesome series!

What media adaptation has Black Butler (Kuroshitsuji) developed so far?

Of course, it’s been serialized for 15 years, so it has been animated several times before too! But it’s a little complicated so here’s the quick outline of its previous anime adaptation!

Season 1
Released in 2008
24 Episodes
Based on the Original 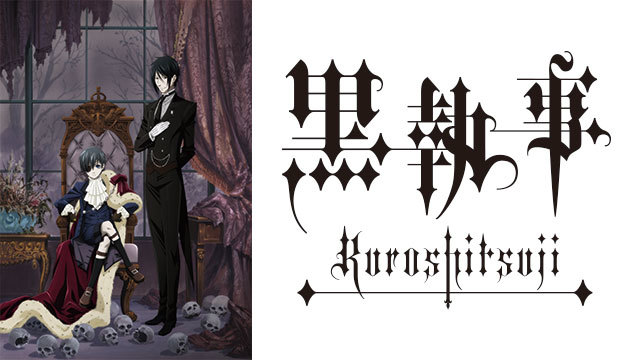 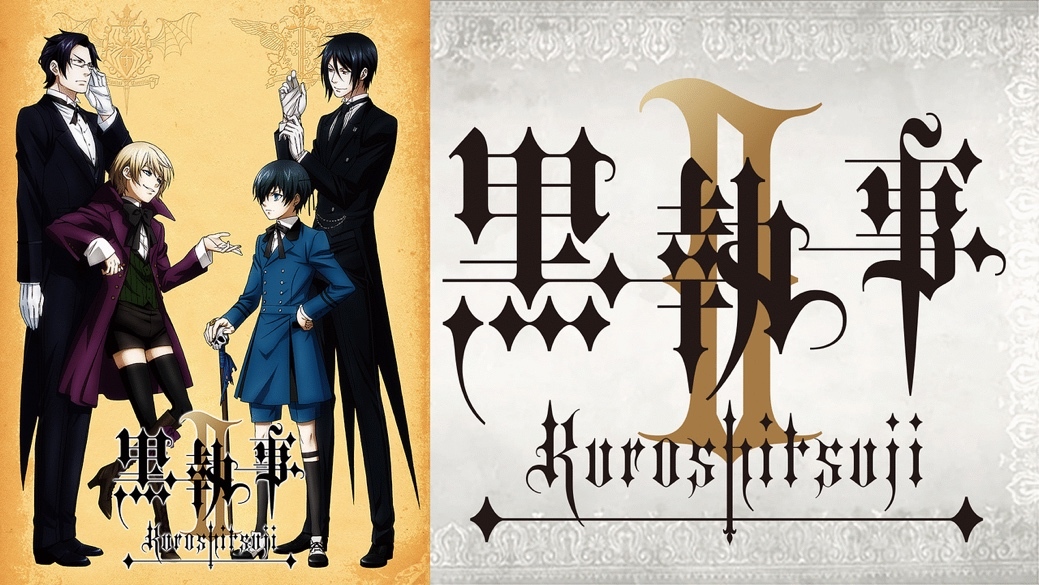 Season 3
Released in 2014
10 Episodes
Based on the Original 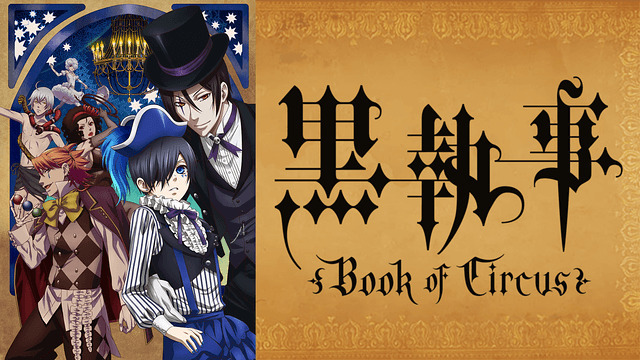 Looking at this info, Season 2 seems to be the original anime but we should watch all 1~3 Seasons?

I would say, you should watch Season 3 after Season 1!
Season 2 is different from the original as to its development or ending, so if you watch all the three seasons in order, you might be confused like ‘???????’. I should say you should think of Season 2 as the original element, where you can enjoy Black Butler from the different angle. So watch Season 1, then 3 and finally 3!

What’s more? If you want to enjoy the worldview of Black Butler more, check out ‘The movie Black Butler: Book of Atlantic’ too! This is based on the original too so you can enjoy the original episode with such beautiful and powerful images! It’s one of the most important episodes in the original, so don’t miss it out! 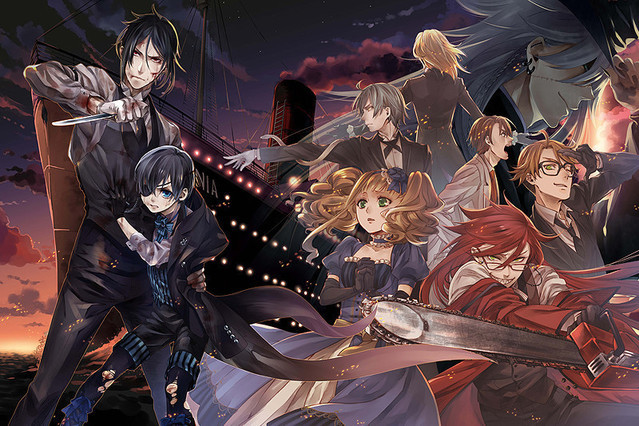 So! There might be a huge move this year……! Let’s enjoy such an exciting Black Butler through manga, anime and a movie, and prepare for the one coming up next!

Alright, then I’ll watch anime from Season 1, then 3 and 2. Why don’t you enjoy Black Butler in your own way?
Check HERE for OVER 950 Doujinshi of Black Butler (Kuroshitsuji)!

Already! This is all for today! We’ll see you all at the next article!
Bye now~!
Sebastian Michaelis, Black Butler (Kuroshitsuji), Ciel Phantomhive