Hello everyone! There are quite a lot of Winter 2021 Anime, whose the original I don’t know so I’ve been enjoying watching them! I’m Otaku Republic’s Boss.

Hello everyone~! More and more shows have been added to my watch list day by day…… It’s Saori from Otaku Republic!

So today! Among all the Winter 2021 Anime, Episode 1 of a series, which we have featured in the previous article, aired so we’ll share that with you today! This time, we’ll focus only on Episode 1! 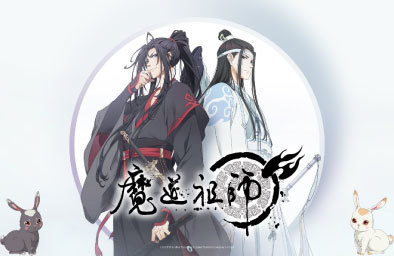 Right! Let me introduce the series in the shortest and easiest way. It’s an anime series whose original is a BL novel, which went viral in China!
Various adaptations have been developed such as a live action drama, a manga series and a radio drama……! It’s already concluded and a Japanese dubbed version has released in January 2021 here in Japan too!

Wow! The images are so beautiful!

Before sharing my commentary of Episode 1, let’s take a look at a rough outline, avoiding spoilers! Let’s learn what kind of story Mo Dao Zu Shi is in advance!
The story is set in the ancient China, when evils or demons existed! 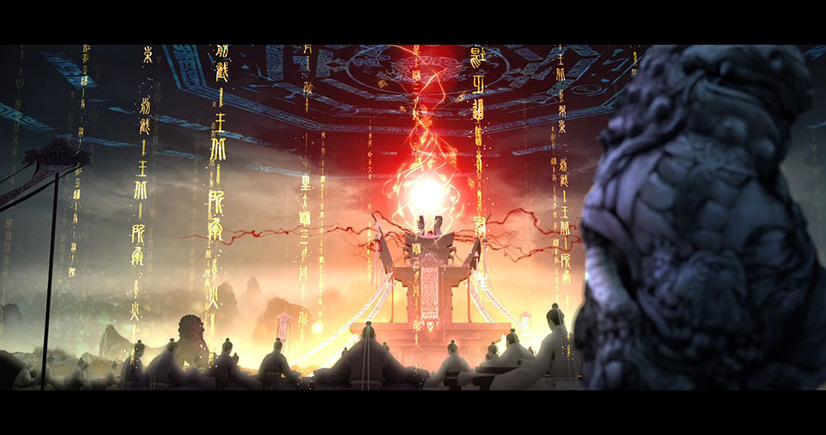 The story is mainly about the “trainees” (Sennin), getting rid of such evils and demons! 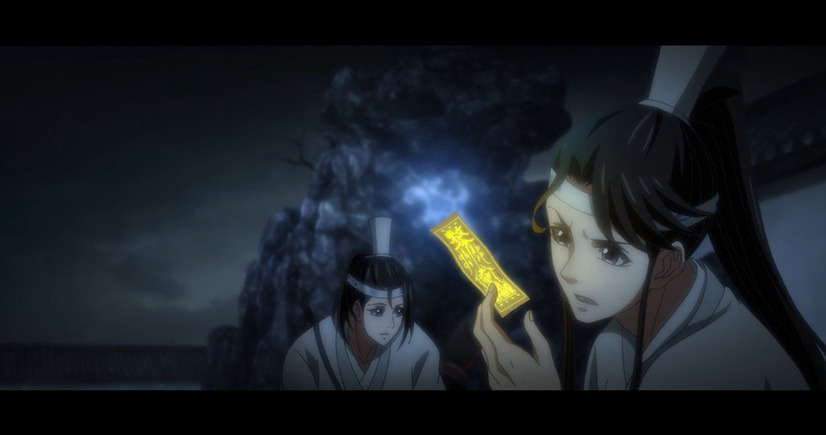 The main protagonists are Wei Wuxian, who died 13 years ago and was forced to revive through a Sacrificial Ritual, and Lan Wangji, who used to be Wei Wuxian’s rival when Wei was still alive. 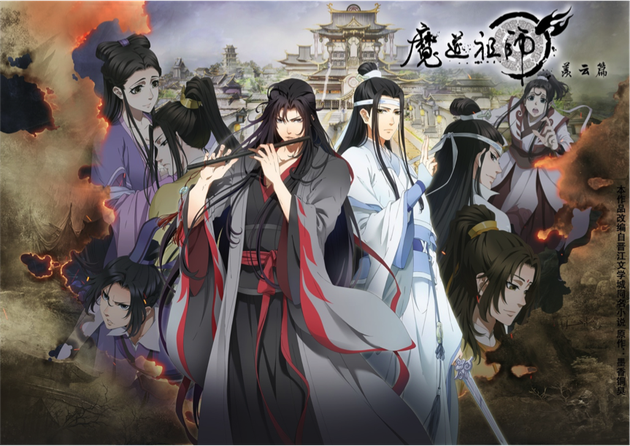 They were destined to see each other again and will find out the truth of the incident, which happened 13 years ago, and the reason why Wei Wuxian was revived during the adventure.

In Episode 1 of the anime, Mo Dao Zu Shi, we see so many proper nouns! I bet those, who haven’t watched it before, will have no idea what the characters are talking about so let’s take a look at a rough outline of Episode 1 together! (Actually, I’ve watched it a couple times but I don’t think I understand the story fully……)

The first scene’s timeline is 13 years ago, when notorious “夷陵老祖 (Yiling Patriarch)” is subjugated by the trainees. 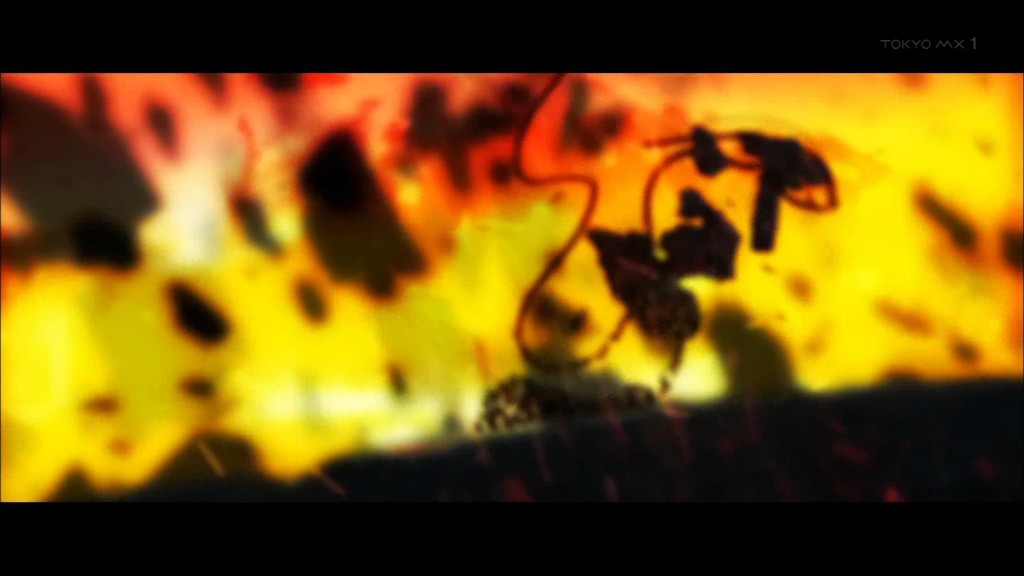 Who on earth is “夷陵老祖 (Yiling Patriarch)?

It looks like it’s Wei Wuxian (mentioned above) thirteen years prior to that time.
He seemed to have done many evil things so he probably deserved to be subjugated. He used to be called a ‘founder’ who is in the higher level than the trainees, because he was a powerful disciple of the recluse ritual, who would do righteous deed. However, he couldn’t win because of the number of the opponent……

13 years have passed since then. Nobody has still been able to revive Yiling Patriarch but……? 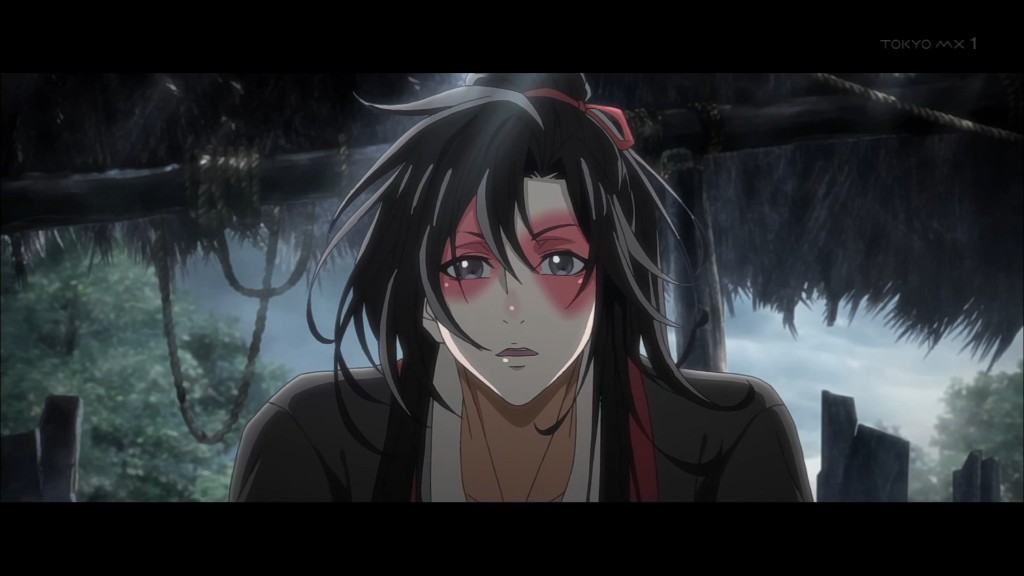 Since Yiling Patriarch has an incredible potential, everybody knows that they will have a big problem if he is actually revived. The trainees look for the way so his spirit can never return to the current times but…… 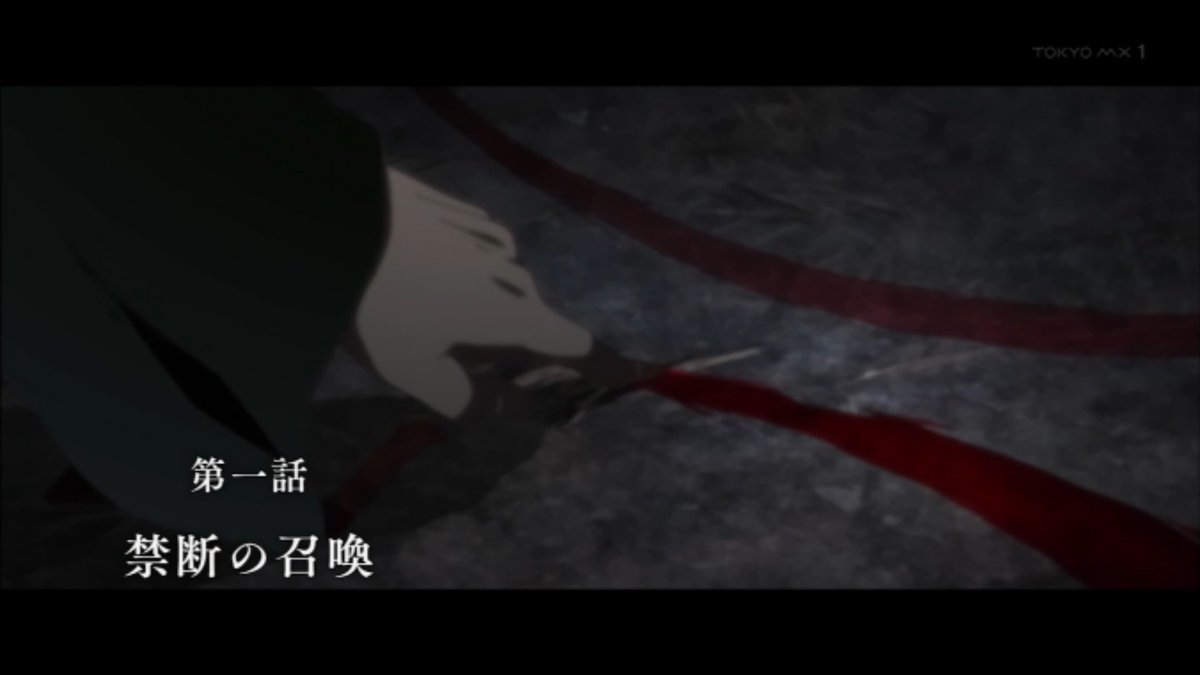 It looks like the boy, Mo Xuanyu, has used ‘the forbidden ritual to summon evil spirit, sacrificing his blood and soul’ to take revenge on the Mo family who abuses him. 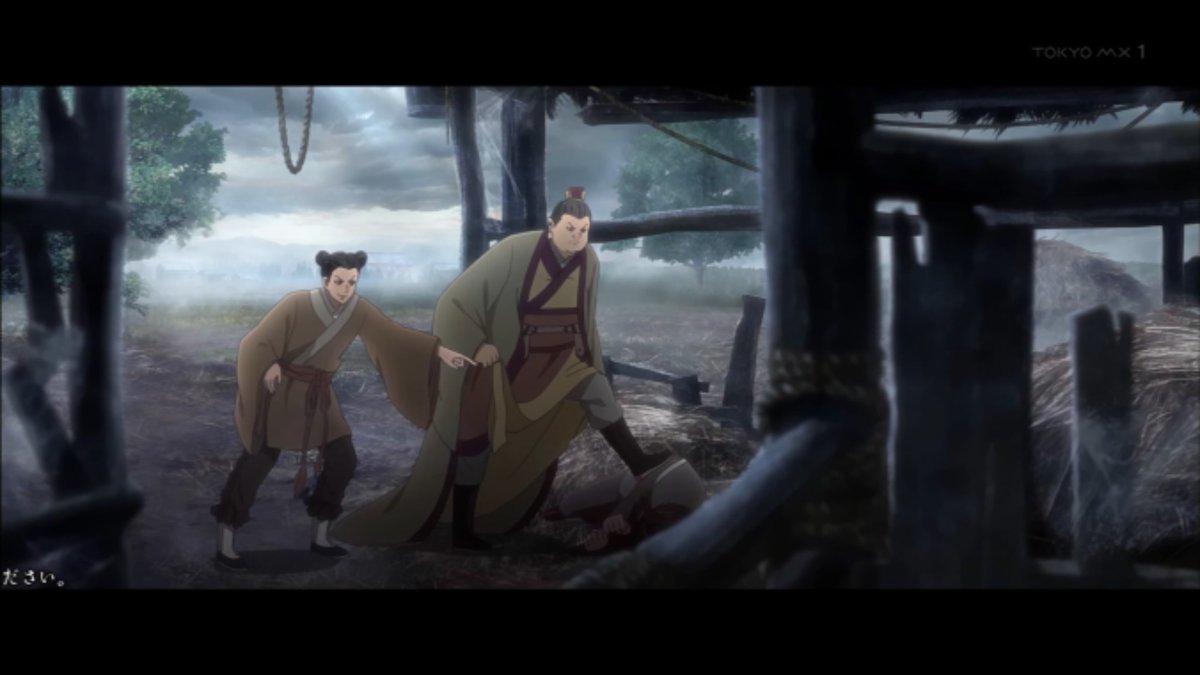 What? Then what happened to the boy who summoned him……

Yiling Patriarch, who’s revived, wants to make Mo Xuanyu (who has summoned him)’s wish come true but he had died (disappeared) without any specific instructions so he puts on hold. He takes a revenge on Mo ZiYuan (didn’t kill him, though), who bullies as usual, misunderstanding that it is Mo Xuanyu. 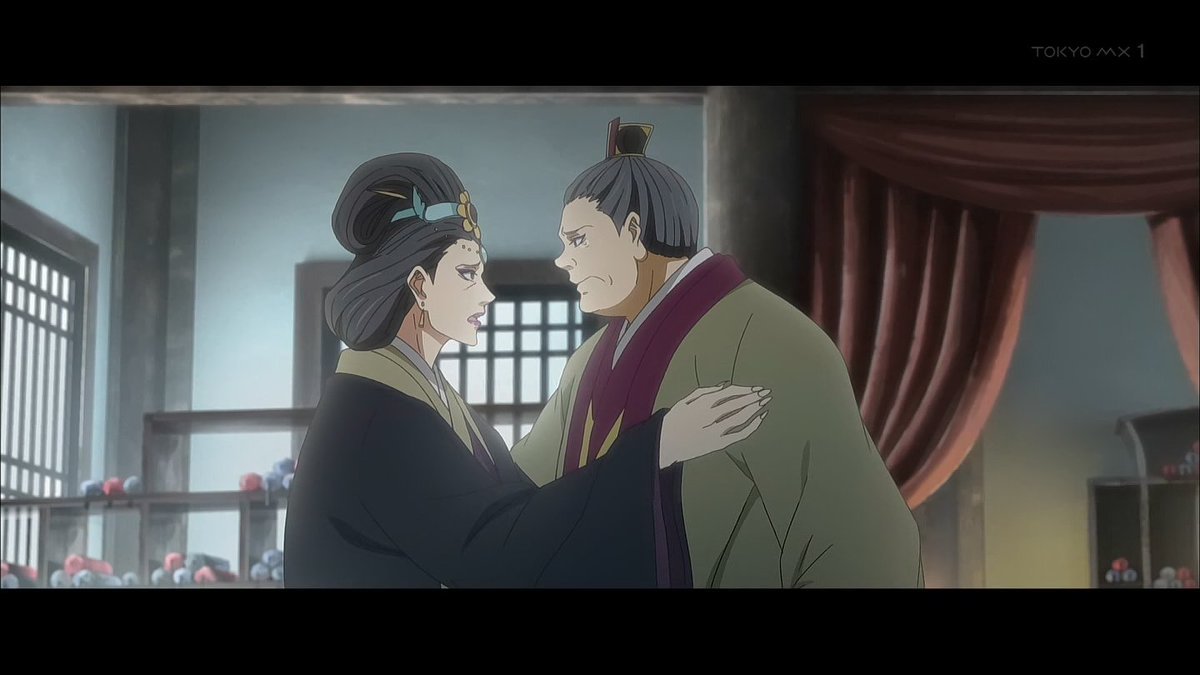 Mo ZiYuan runs away and comes back to the mansion. There, he sees two trainees; Lan Sizhui and Lan Jingyi. According to them, demons show up at night so they come to get rid of them but…… 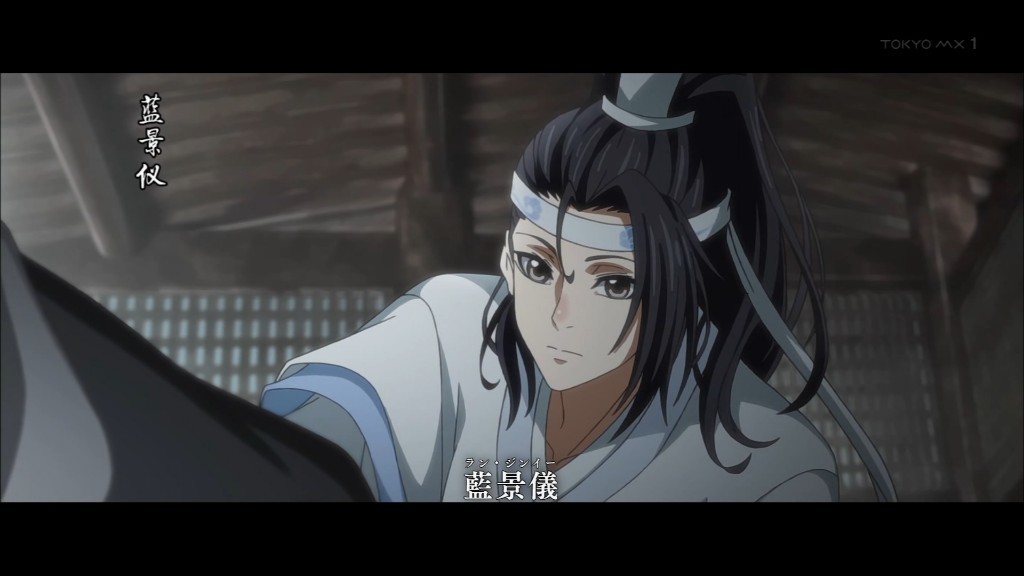 Various things have happened and Yiling Patriarch realizes that he is revived to the world and wonders at the same time. What has revived him is clearly the forbidden ritual. There’s no way that just a normal boy in town can know the ritual……

I wonder who has taught him……

And at midnight, the incident happens……

But at midnight, the incident happens. They find a dead body in the garden and Yiling Patriarch is witnessed there.

Wow. what is he doing there?

Plus, they find out that the dead body is Mo Ziyuan, who has abused Yiling Patriarch earlier. Mo Ziyuan’s mother really gets upset, assuming that Yiling Patriarch has killed him since she has seen them arguing hard in the day time. 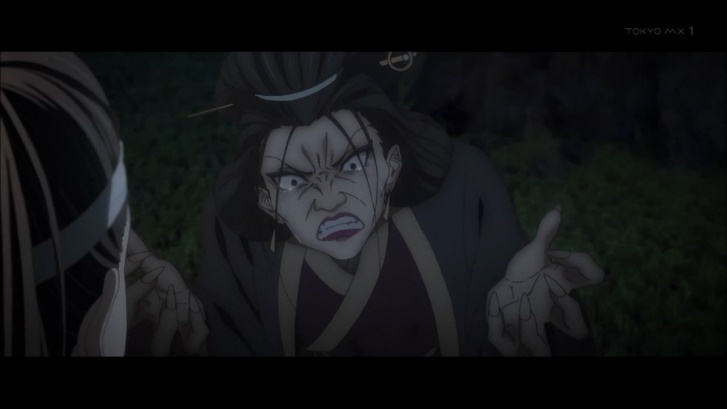 However, it wasn’t the truth. Yilian Patriarch, who was suspected, pretends to be frightened and kicks the dead body of Mo Ziyuan. Then they see a part of the flag, coming out of his clothes. which protects the mansion from demons. 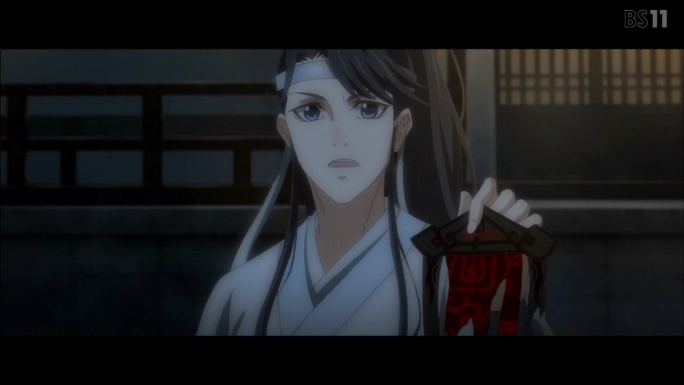 It looks like they try to put the blame on Yiling Patriarch, making it look like he has stolen the flag but…… the truth is that the flag has magic, which can be used to make a barrier if you use it in a right way but you might be easily targeted by demons or evils who like magic if they hold just the flag.

So that means Mo ZiYuan has stolen the flag, which he was actually going to use to make a barrier without knowing anything and ends up being attacked by demons and killed?

What…… then it’s not functioned as a barrier now, right? How about the demon?

Of course, it’s in the mansion. 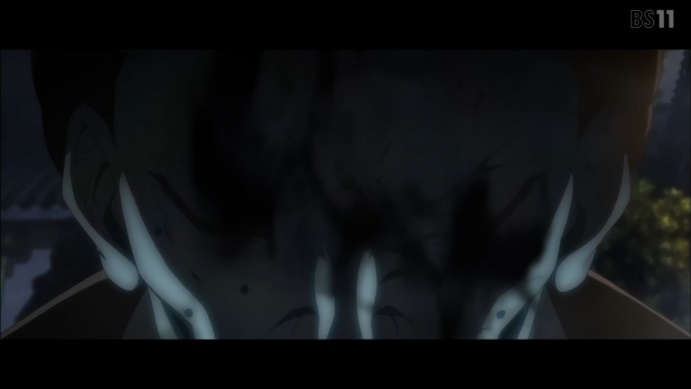 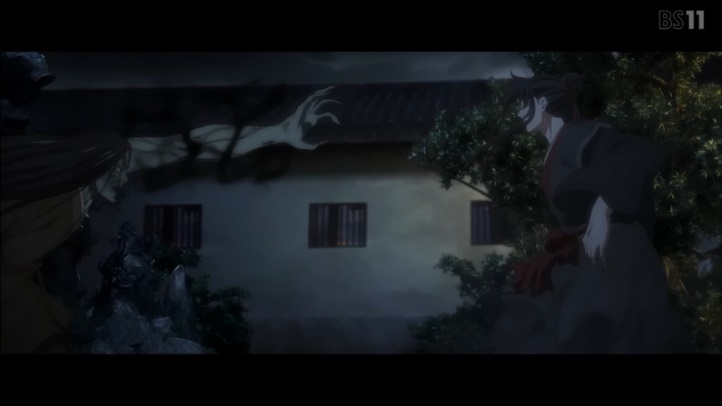 Woaaahhh! The servants who are obsessed by the demon now have long hair!!!!!!!!!! 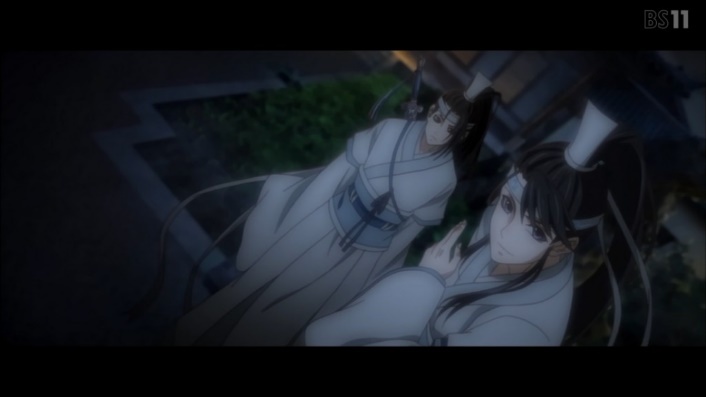 The two trainees from the Lan family get rid of that demon. Being exhausted, the servants die.
The two trainees judge that this murder is not done by the demon but from the ‘curse’ that is prepared by someone to destroy this house. The two have decided that they cannot defeat it on their own…… so they expect to get some help from other trainees if there are any close by.

I think that’s a good judgment that they have made. If they think it uncontrollable, they should ask for help before it’s too late. These two are totally competent.

However, Yiling Patriarch shows them a negative look. Actually, the family line of these two used to be close to the one of Yiling Patriarch before they were born. He feels a little worried that someone who he knows might come to help them……

The one who came to help them was “a friend of his,” who he has met after 13 years.

As the two have assumed, they cannot get rid of the ‘curse.’ What’s worse, Mo ZiYuan’s mother is obsessed by the curse, ending up dying.
The two from Lan family will die…… Yiling Patriarch thinks and helps, controlling dead bodies of Mo ZiYuan and the servants. 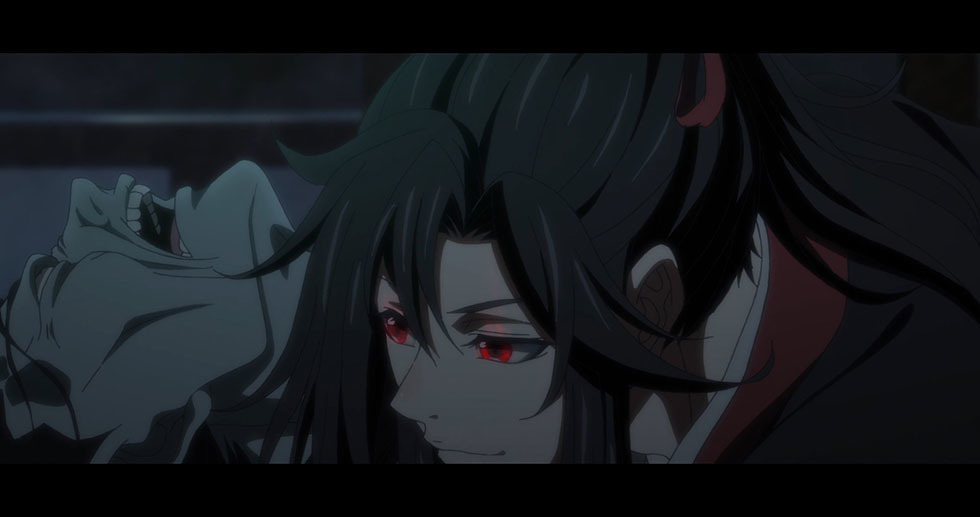 Wow. He did such an incredible thing, just like that.

However, even by controlling those dead bodies, the curse is still there in his mother. Now the two from Ran family are in a pinch.
He really wants to help more but he also wants to avoid being found out his true color by them…… The one who shows up in front of Yiling Patriarch is…… 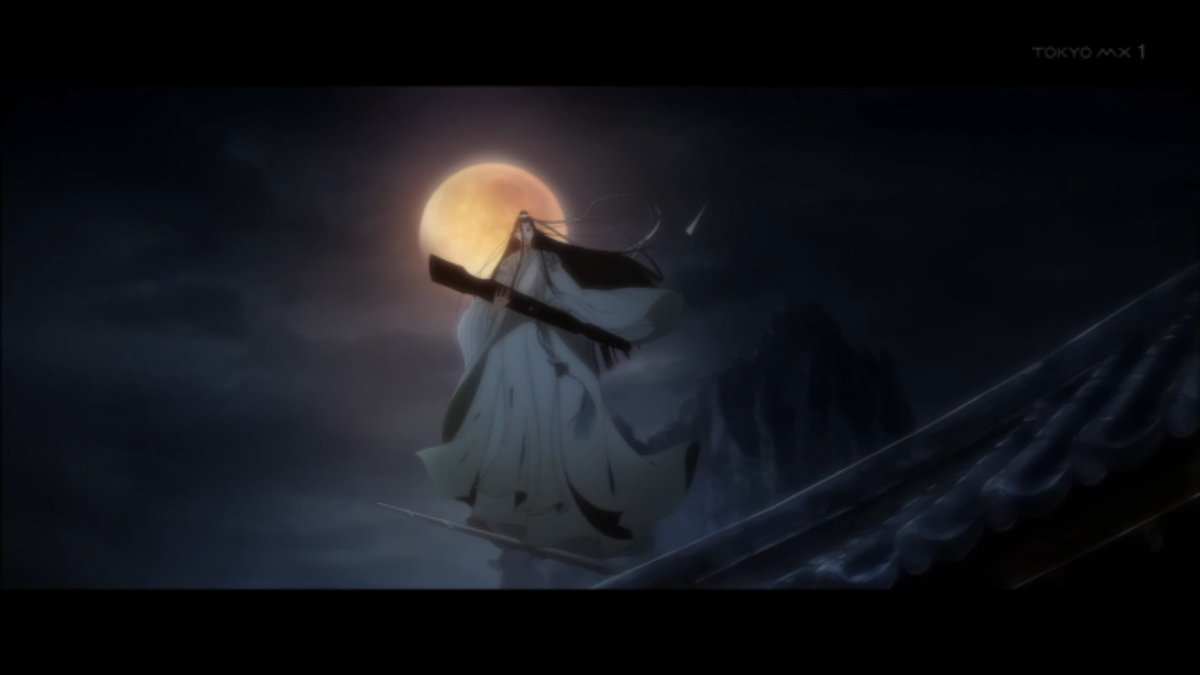 Lan Wangji, who he has known before they were born and also a rival! Episode 1 ended here!

Mmm! It was easy to understand! Thanks!

Yeah, but in Episode 1, there are so many unknown things, hermit rituals and peoples’ names so it’s super confusing but once you understand each word and sound, you’ll be able to watch it smoothly!
For those who couldn’t understand Episode 1, what we wrote here is a rough outline (even though I omitted some), so try to remember what we shared today!

By the way, I’ve heard that in anime, almost all the BL descriptions that are in the original have been eliminated! (Since I have only watched Episode 1, I don’t know much about it though……)

What! Then maybe I should follow it! It was super popular in China so I’m super interested in it actually!