Hello, everyone! It’s Saori from Otaku Republic!
For today’s Coupling Column …… Releasing since March 2020! It’s not too much to say that this is one the most featured smartphone games, Twisted Wonderland!

Since the story of Twisted Wonderland hasn’t been concluded yet, some parts of what I’ll be writing here might change by this season next year……? But a dramatic change might be lovely, right? Well, first of all, we’ll feature four pairs who were focused on at the beginning of the story, Chapter 1 to 4!
※Please note that this will contain some minor spoilers of Chapter 1~4.

https://otakurepublic.com/product/tag_page.html?tags=711454
The relationship of the two: “Boss” and “His Right-Hand Person”, both belonging to the same dorm.
They both are students in Savanaclaw Dormitory.
Leona Kingscholar is a third-year and the head of Savanaclaw Dormitory. He’s 20-year-old (repeated a year). Ruggie Bucchi is a second-year student. He’s not the vice head of the dorm but is engaged in assisting Leona.
(Even though there used to be some vice head in the past in Savanaclaw Dormitory, they all have challenged Leona over the head’s position, ending up having lost. That’s why there’s currently no vice head in this dorm.) 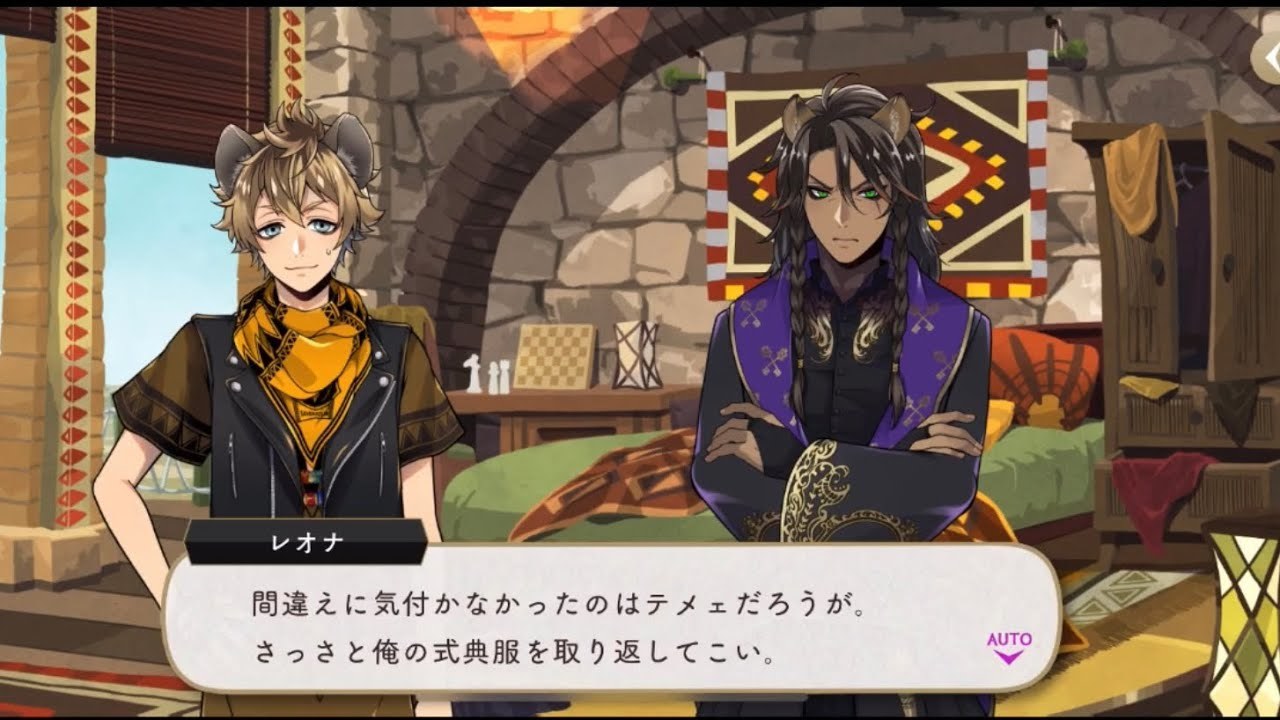 One of the biggest characteristics of their relationship is that they have a “community of interests,” rather than the “trust.”
Leona (the second prince of his home country) appears to be a slacker. On the other hand, Ruggie has grown up in a poor environment; therefore, he is very good at all the housework such as cooking or cleaning. Above all, he loves money and “anything advantageous.”
Therefore, Leona asks Ruggie to do all his chores, such as managing his meals, taking his clothes to the dry cleaning, sewing his clothes, and etc……
And Ruggie is (almost) always willing to do all those chores, sometimes complaining about it. Why? Because Ruggie knows that he can get himself something, using the change after he buys something he’s asked to buy from Leona. Like this, Leona always tries to give Ruggie something in return, with adequate or more consideration. 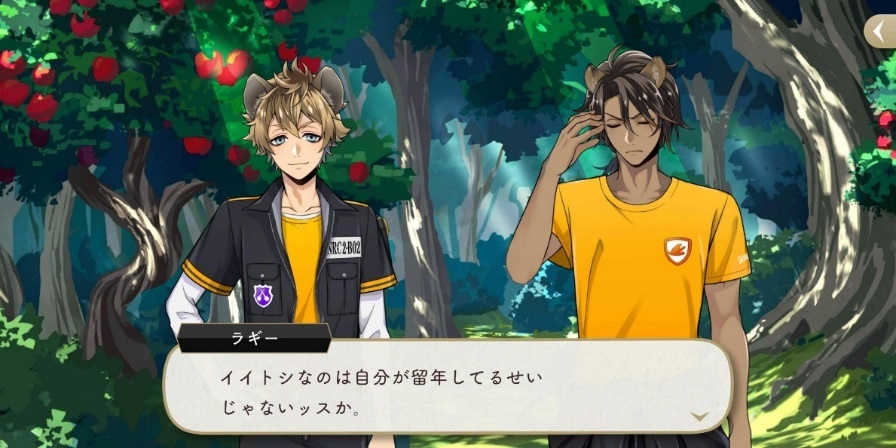 Leona rates Ruggie very highly, saying “He is skillful with both his fingers and mouth. Most of the time, he is clever enough to get everything done perfectly.” Even though Ruggie complains about Leona, who asks him to do everything, Ruggie still (sometimes……) trusts Leona because he gives him something in return.
But! Once they are about to get involved with some troublesome matters, they try to leave there, making each other a decoy. Like this, they both are sly, always calculating.
They are just like a lion and a hyena, with a give-and-take relationship.

https://otakurepublic.com/product/tag_page.html?tags=721887
The relationship of the two: Both second-year students but “totally opposite” pair 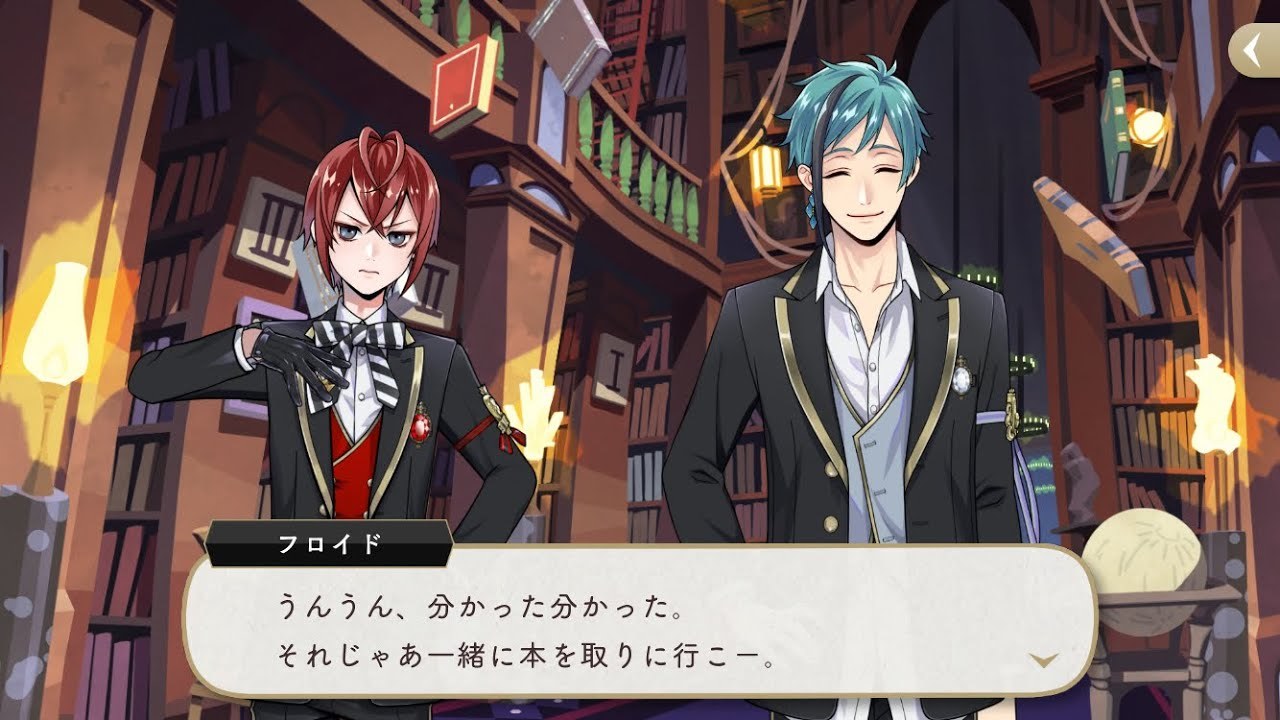 Floyd Leech is a second-year student in Octavinelle Dormitory. He is very laid back and moody. Riddle Rosehearts, on the other hand, is a second-year and the head of Heartslabyul Dormitory and has a strong commitment and dedication for implementing the rules.
While Floyd is tall and laid-back, Riddle is short for a normal 17-year-boy and too serious.
Since their personalities are totally opposite, they often argue and conflict in various situations. 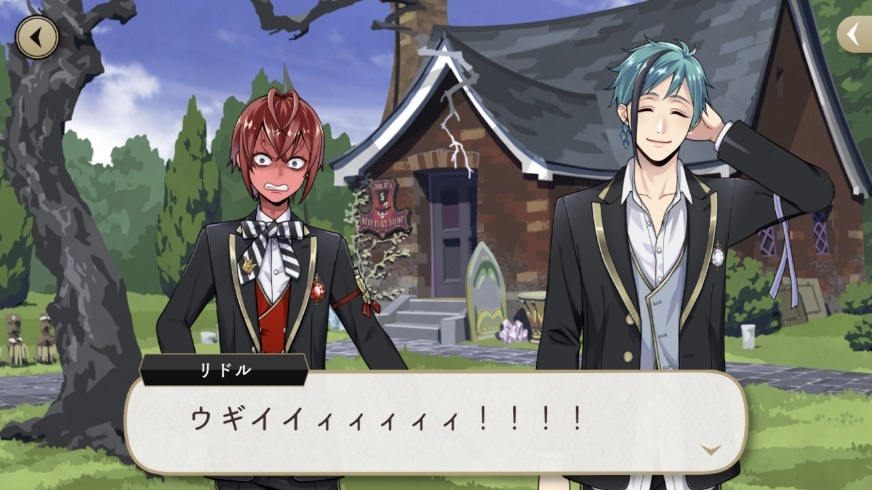 Actually, Floyd is the one who causes such conflicts.
Floyd loves to make fun of Riddle and he talks to him all the time, calling Riddle “Kingyo-chan” (Kingyo=goldfish). The reason why Folyd made that nickname is because “Kingyo-chan is red and so small that there’s nothing we can eat from it and it gets flushed when it gets mad.”
Even though he does make fun of him, he never does anything violent to him.
When Floyd makes fun of Riddle, he gets flushed and angry and refutes him seriously. Floyd seems to be enjoying such reactions of him. Most students at school avoid being with Floyd, who is moody and likes to fight. However, Riddle is the only one who complaints directly to him, which is so rare.
By the way, when Riddle saw Floyd having such a terrible experience (due to his selfish behavior), Riddle looked as if he was a little innocent boy, with a very beautiful smile, looking very happy.

Also, Riddle is such a powerful wizard that he was chosen to be the head of the dorm, while Floyd is very athletic (good at fighting as well). They both understand that they have the real abilities and admit each other.

https://otakurepublic.com/product/tag_page.html?tags=713933
The relationship of the two: Both the vice head, “never missing a trick” 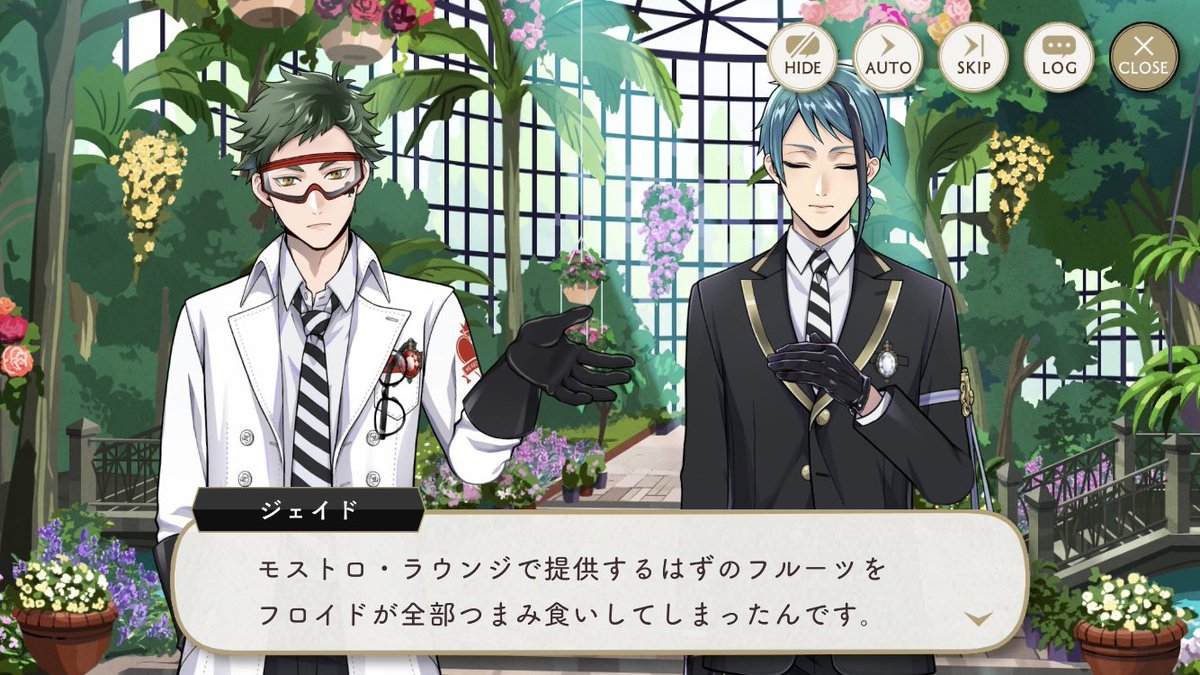 Trey Clover is a third-year and the vice head of Heartslabyul Dormitory. He is calm and nerve wracking.
Jade Leech is a second-year student, the vice head of Octavinelle Dormitory. He often time talks in a formal manner but is wicked.
Both are the vice head and tend to be controlled by their leaders (and Jade is the other twin)…… That’s what Trey thought about Jade, “being similar,” having the same worry. However, it wasn’t that easy…… Well, two personal episodes, where they find the hidden essence of each other behind their smiles, are implemented in the game.

Actually, Jade is basically polite and loyal, however, he is wicked. He looks at those in need with a smile and is candid with one word too many. It’s true that they’ve been controlled by their head, Azul and Floyd, but he also enjoys himself behind their back.
And actually, Trey is a little wicked too, though he is not as wicked as Jade. Just like the comment, “Even though he is mature and calm, nobody can read his mind,” he usually never shows his true feeling. And when he has to “punish” someone, who breaks the rule or is against him, he shows an incredible sadistic smile, which is far from his calmness.

They both are the vice head, (superficially) looking polite and being nerve wracking. However, they are actually…… sadistic, as if they are the villains.
Also, as I mentioned above, since Floyd often makes fun of Riddle and gets him into a trouble, the vice head, Trey and the other half of the twins, Jade, sometimes shows up and tries to get rid of such troubles.

The relationship of the two: Both belong to Scarabia Dormitory, having the “relationship between master and vassal since they were born” 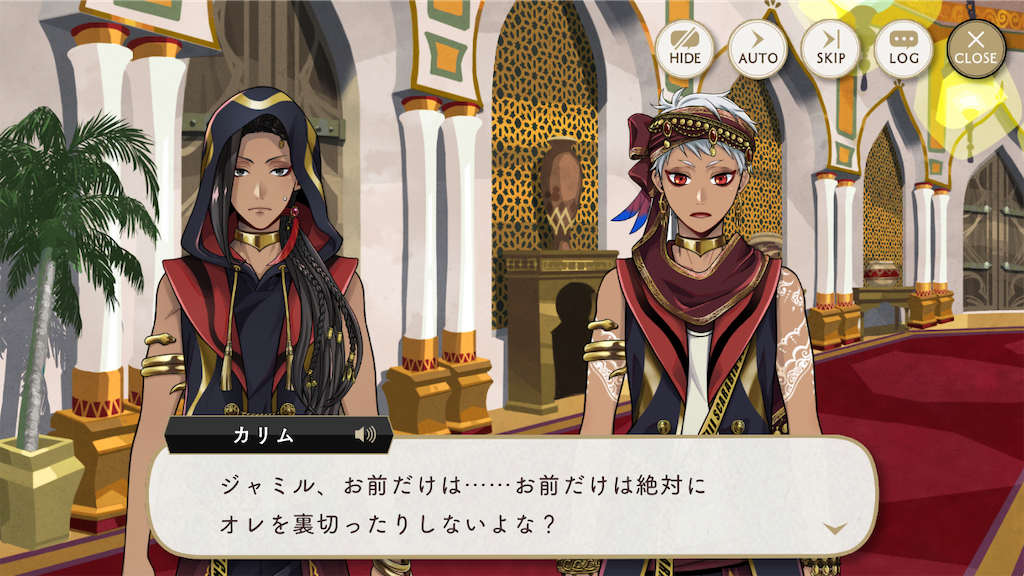 https://otakurepublic.com/product/tag_page.html?tags=718254
Jamil Viper is a second-year student and the vice head of Scarabia Dormitory. His ancestors have served Kalim’s family generation after generation, so he’s been dragged around by the careless Kalim since they were young.
Kalim Al-Asim is a second-year student and the head of Scarabia Dormitory. Born in to a wealthy family, he is very laid-back and generous.
They grew up together since they were born, just like they’re the real brothers, and even went to school together too. Kalim is very calm and cheerful. He is very honest and starts the relationship by trusting people. Jamil is nerve wracking as the vice head, always supporting Kalim as a servant.
However, Jamil does complain to Kalim. When Jamil sees Kalim, trying to help out those in need, which might lead to a trouble, Jamil often scolds him, saying “Just tell them you want to go back to the dorm and think about it! (Meaning, just ask me first)”

Kalim trusts Jamil, being always down to earth, more than anybody.
Kalim believes that they’re the real brothers and the best friends since they’ve been together since born. Kalim tends to be targeted as a son of the weathy family by being kidnapped, risking his life. He swears that “he will only eat something Jamil makes.” Kalim is usually willing to accept anything but when it comes to getting something to eat, he refuses it right away. Many students seem surprised at such attitude of Kalim. Everybody knows that Jamil is very special to Kalim.
Then, how does Jamil think of Kalim?
That’s gonna be depicted in details in the main story, Chapter 4.
There is a scene in the commercial of Chapter 4, where Kalim says “Jamil, you will never betray me. Because we’re…… the best buddies, right?,” smiling on his face.
Then Jamil replies to him, “Of course. I’ve never thought of such a scary thing.” 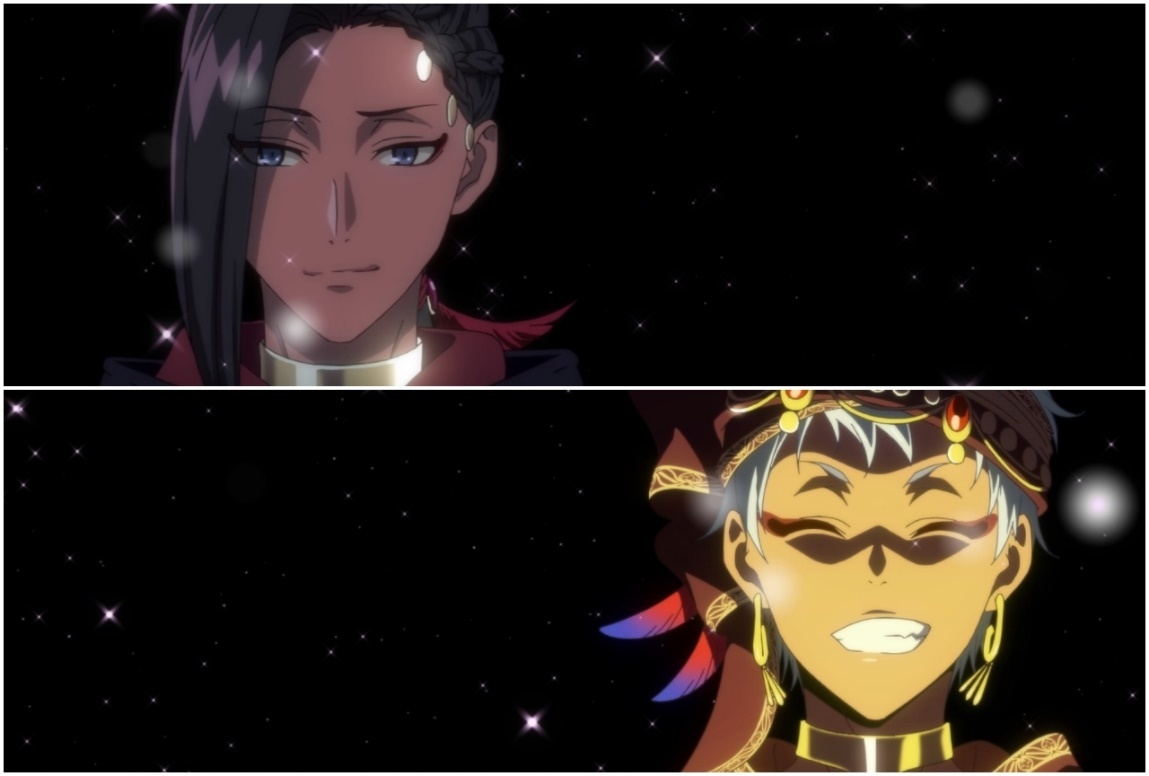 As for Twisted Wonderland’s comics, they have currently covered up until the middle of Chapter 5! They’re releasing slowly with various seasonal events……!

I might feature another version of this series too……! There will be many popular characters, appearing after Chapter 5 too so go check it out too!!
OVER 780 Doujinshi Releasing! Check HERE for Twister Wonderland’s Doujinshi!

Alright now! This is all for today! I’ll see you all the next article!
Bye now~!
Twisted Wonderland