※This review contains all the spoilers regarding Kimetsu no Yaiba movie. There will be no commentary about the storyline. Please be very careful for those who would not like the spoilers.

Hello everyone. I finally went to see it! It’s Saori from Otaku Republic.

Aaand hello everyone. I’m Otaku Republic’s Boss. I finally went to see it too.

【Review】Thanks, Kimetsu no Yaiba MOVIE, the BEST EVER. 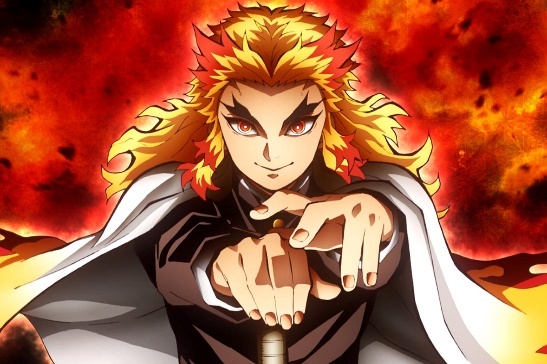 So! Boss and I went to see Kimetsu no Yaiba movie, which released on October 16th. We saw Kimetsu’s posters or ads here and there at the theater and quite a lot of audience even though we picked the less crowded time.

During the first three days since it released, this movie grossed over $44 million in Japan, with 3,420,493 audience. It was the best 3-day opening in Japanese theaters and the top grossing film worldwide for the weekend despite several safety measures, such as having audience keep social distance or disinfect and ventilate the theater, adopted. I’m sure this number will continue to grow even more. 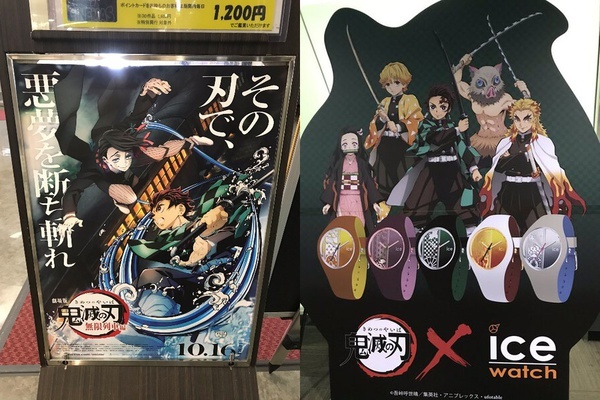 There are a lot to tell you guys but I don’t know where to start so let’s do it with a quick and easy ‘question and answer’ session! Please note that this is our feedback and just for your reference!

How would you rate it with a score?

100! Perfect score. There are no bad points at all (If any, I would say the scene, where they rode on the train up until they got attacked, was not a good pace.) Overall, I felt this movie was ‘worth watching’ so we really don’t care about the bad points even if there is one.

100! More than Perfect!! It would never let us down, actually, it was more than what I had expected. It was much higher than anime in quality!!!

The running time was about 117 minutes but did you feel like it was 117 minutes?

To me, I felt it was longer than the actual time. In a good sense, I thought it was more than enough!
Even though the title has a subtitle Mugen Train version, I thought it would be even better if the story was separated into two parts Mugen Train version & Rengoku VS Akaza version, because the deadly combat of Akaza and Rengoku-San was perfectly…… depicted…… too…… (I’m feeling blue again now, recalling the sad scene in climax) 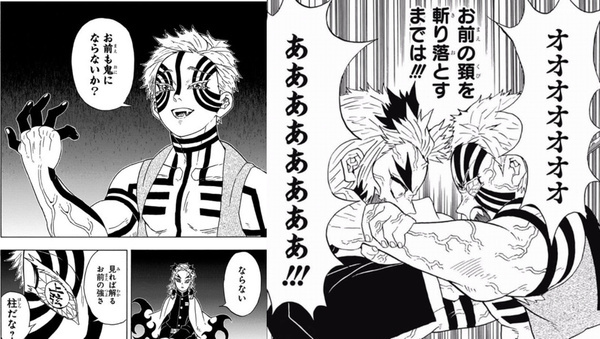 I felt 117 minutes was an instant! I usually go to the bathroom a lot, but especially the battle scene was too thrilling and powerful that I never even felt like going to the bathroom this time……!

Which was the most impressive scene!

All the battle scenes. Since I had read all the manga beforehand, I was impressed by such high quality battle scenes!
More specifically, I loved the scene, where Enmu and Tanjirou fight on top of the train, the one, where Tanjirou and Inosuke cut down Enmu’s ‘head’, helping each other, and the Rengoku-San VS Akaza’s scene! 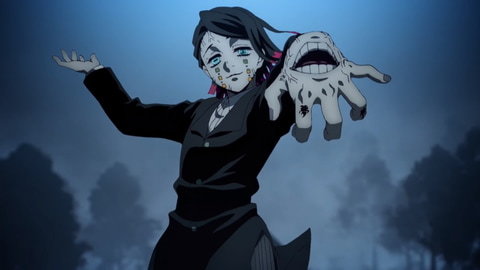 The battle scenes are especially stunning. It might be nothing special to say but if some special elements such as sound, light, voices, shade are added to the 2-demensional story in manga and the story is depicted 3-demensionally; it becomes more impressive with the speed. It was breathtaking. The anime was awesome but the movie was way too good……! 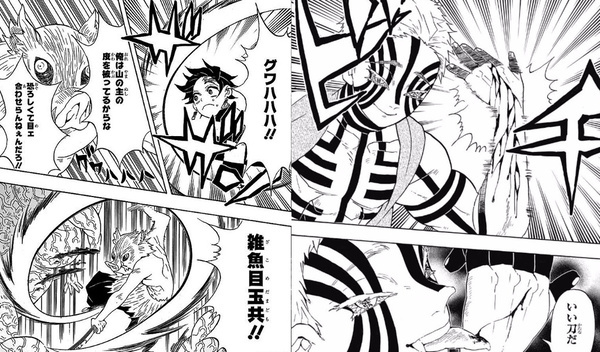 Me…… I really liked the climax scene…… (I’m feeling blue, recalling a sad scene at climax……)
I knew it though…… I knew how the story would end up becoming…… but I cried.
I was extremely moved by the scene, where Tanjirou cried and shouted to Akaza, who was leaving, and the scene, where all the members encouraged with each other, crying hard, facing Rengoku-San’s death……
Even if I knew it would come…… I felt sad from the bottom of my heart, hearing such painful voices…… It was a sad but beautiful scene at the same time…… 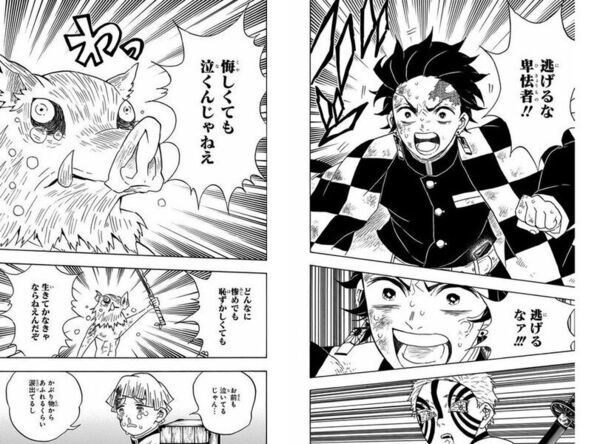 Which chara did you like most except for Rengoku-San.
(I know everybody would say Regoku-San, so……)

Me, I would say Tanjirou.
I like him a lot in the first place but I came to like him even more because I realized how kind, strong and serious he was in the movie. He was such a sweet boy that I couldn’t help but feel that he was ‘destined’ to be miserable…… Most of the impressive scenes in this movie are related with what Tanjirou says and acts too.

I would say it’s Inosuke!
He worked so hard in it! (Of course, Tanjirou worked so hard too.) The dream he saw was so cute, and the scene, where he was trying to cut Enmu’s head off, helping with Tanjirou, made me think that he has grown more than the anime version. (I want that shiny acorn too) He listened to what Rengoku-San and was trying to get over the sadness…… He is super likable then…… 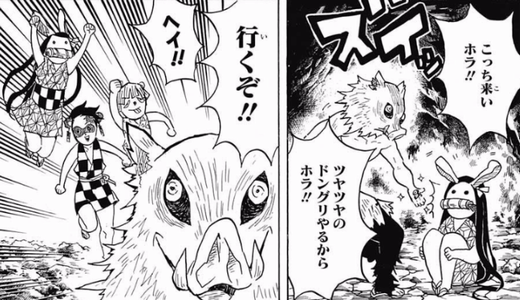 Did you cry, being moved?

Please give a comment to those who will watch the movie.

For those who have read manga already. You will be amazed at this masterpiece because it would be more than you would expect. If you can, please go to the theater and watch it. Especially, the battle scenes are stunning!
For those who haven’t read manga yet. This is such an amazing movie, where you will be able to understand each character’s thought and be impressed at climax, even if you have never read the original. Just feel relaxed and enjoy watching it. 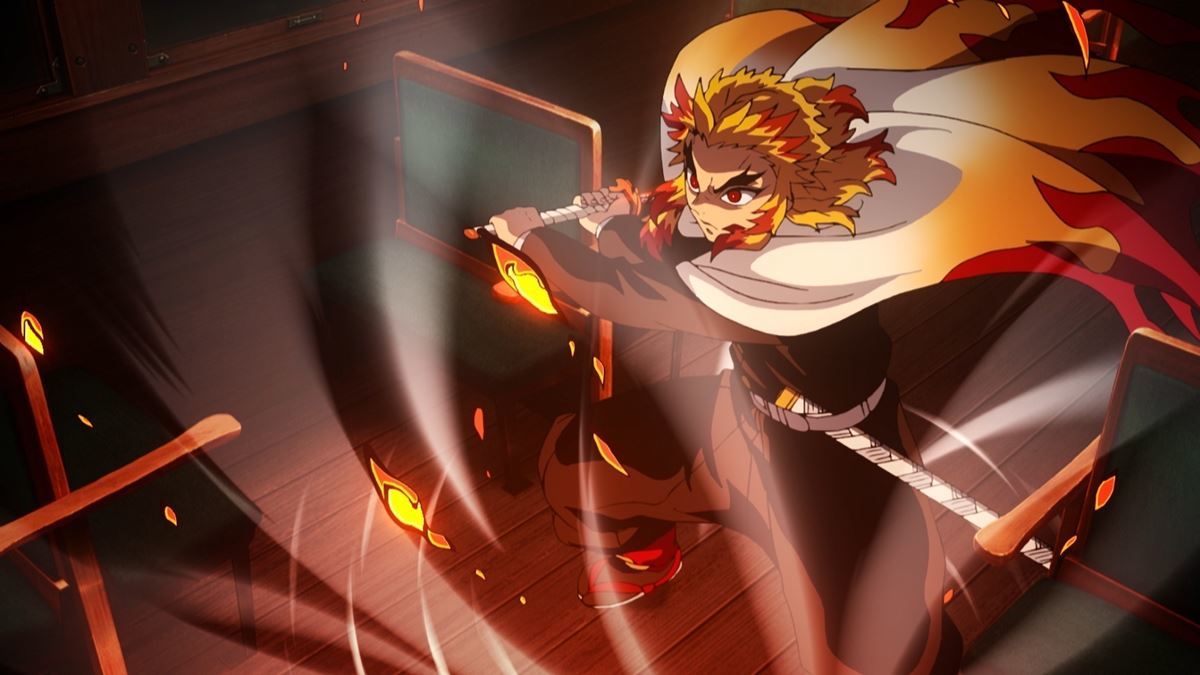 I think Boss said what I wanted to say but he is exactly right. Even if you haven’t read the original, it’s so easy to understand and you will be impressed at climax too! If you can, please go to the theater. If you watch it through DVD, try to watch it in the dark.

Do you think there will be Season 2 coming up?

Yes, I do!
This huge hit will surely lead to the release of Season 2! I mean I want to watch it!! I really want to watch the next episode after watching this movie……!

Of course, there will be!
Since this movie finished exactly at chapter 66 of the original, maybe it would start with Yukaku version, if there is one.? There wasn’t an announcement regarding Season 2 in the movie but I have a feeling that there will be a sequel in 2021……!

It was such a masterpiece! It worth waiting and becoming such a featured movie. I’m 100% satisfied!

It had been a while since I last cried by the movie…… It was such an impressive movie, I mean, they picked the right episode for the movie…… Action, acting, performance…… everything was perfect…… If you have a chance, please watch it and listen to the ending song too…… It’s a little difficult time now to go see the movie but it was an outstanding movie……!

Already! This is all for today! We’ll see you all at the next article!!
Kimetsu no Yaiba, Rengoku Kyoujurou