Hello everyone!! I watched Episode 1 of Anime, Hypnosismic!! It’s Saori from Otaku Republic!

Well well, Boss!! How was Episode 1 of Anime, Hypnosismic? Give me your feedback!

OH! THIS IS IT! This is the worldview of Hypnosismic!!!!!!

【Hypnosismic】Here Comes Feedback of Episode 1 of Anime! You Will Know Everything about Hypnosismic with This Episode!!

Exactly! You’re exactly right!! This Episode 1…… Aww…… I want to say it now but if I do, I will mess up our feedback!! So let’s do it in order!
First of all, it was so good! For those who are familiar with the title, Hypnosismic but don’t know its content, you will understand almost 98% of the story! Yeah, it was good like that! So go check it out!!

Individualities and Attractions of the FOUR Divisions Were Well-Depicted!

Let me explain super roughly. Some people were investigating the four divisions, Ikebukuro, Yokohama, Shibuya and Shinjuku, now extending their power. That’s why we got to know what kind of members they were and what kind of relationships they have so clearly! 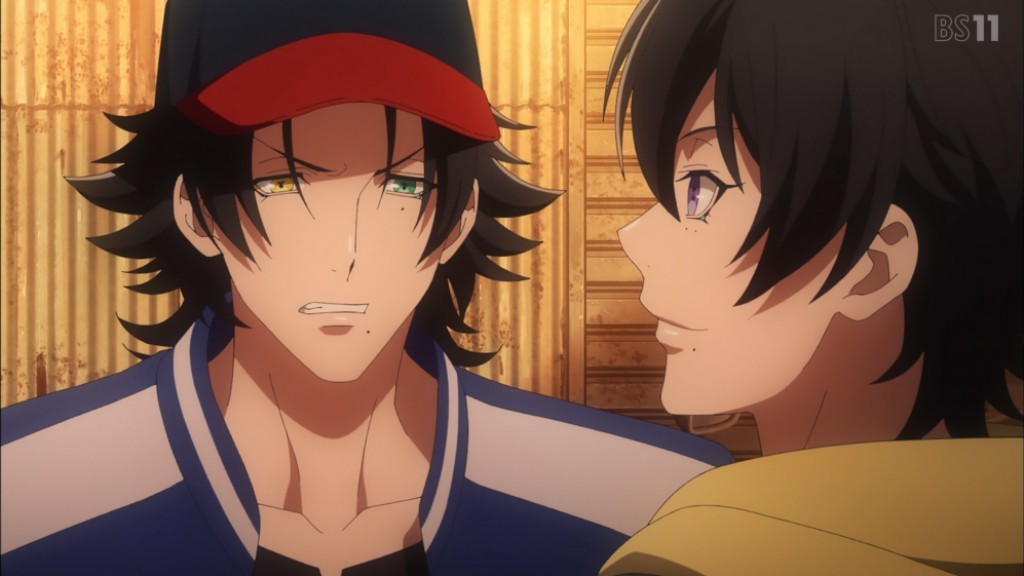 Oh, I wondered…… I saw the members of Ikebukuro Division, I mean those three brothers, chasing the target, but are they pro detectives or something? 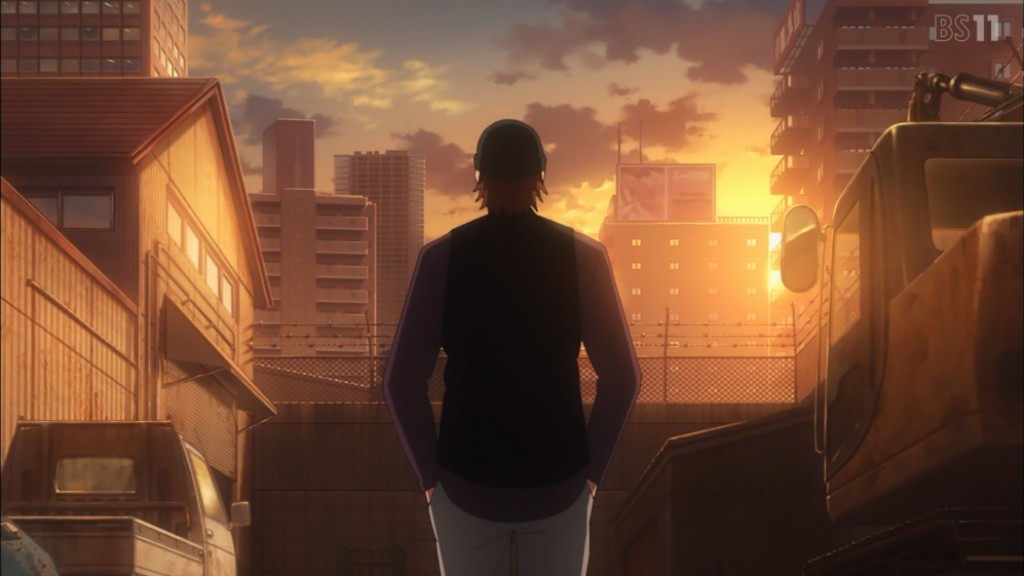 Nope, they are not detectives but they are like the jack of all trades, called Yorozuya, where they solve any worries. For instance, they look for a lost kitty, go to a grocery shopping…… They do anything they can for those in need! (The two younger ones are still students so the oldest Ichirou regularly works as the jack of all trades!)

Mmm…… I see. As for Yokohama, the police, yakuza (mafia) and the military guy were trying so hard to maintain law and order in the underground community…… The one with white hair is yakuza, right?

Yep, he is. However, since he is the leader, he seems to try not to overdo and manages well so he won’t let them do any too immoral activities under the rules. 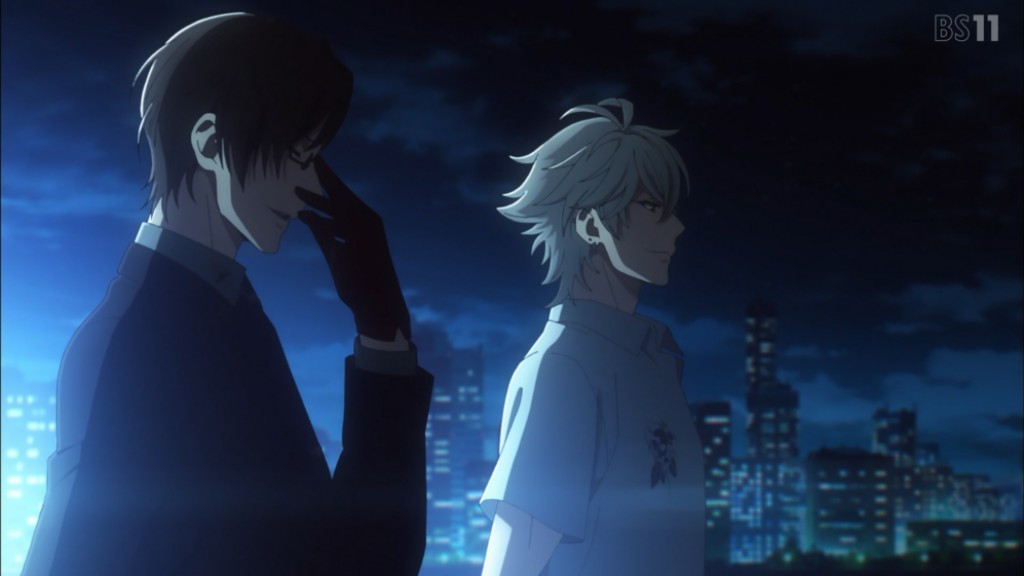 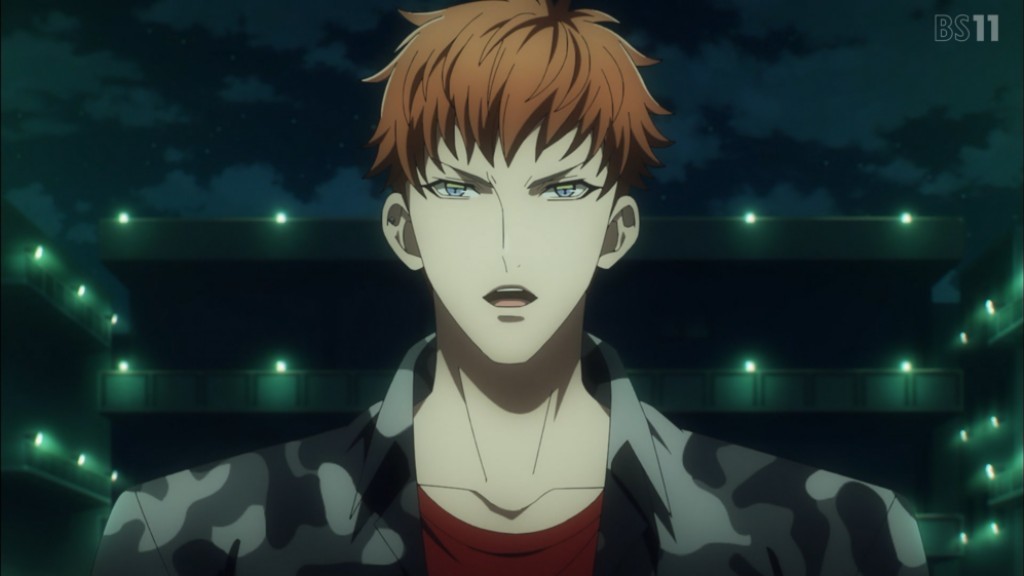 Oki-doki…… As for Shibuya, those three get along well, huh? The fashion designer, the novelist and the gambler were making money by holding a concert on the street, huh? 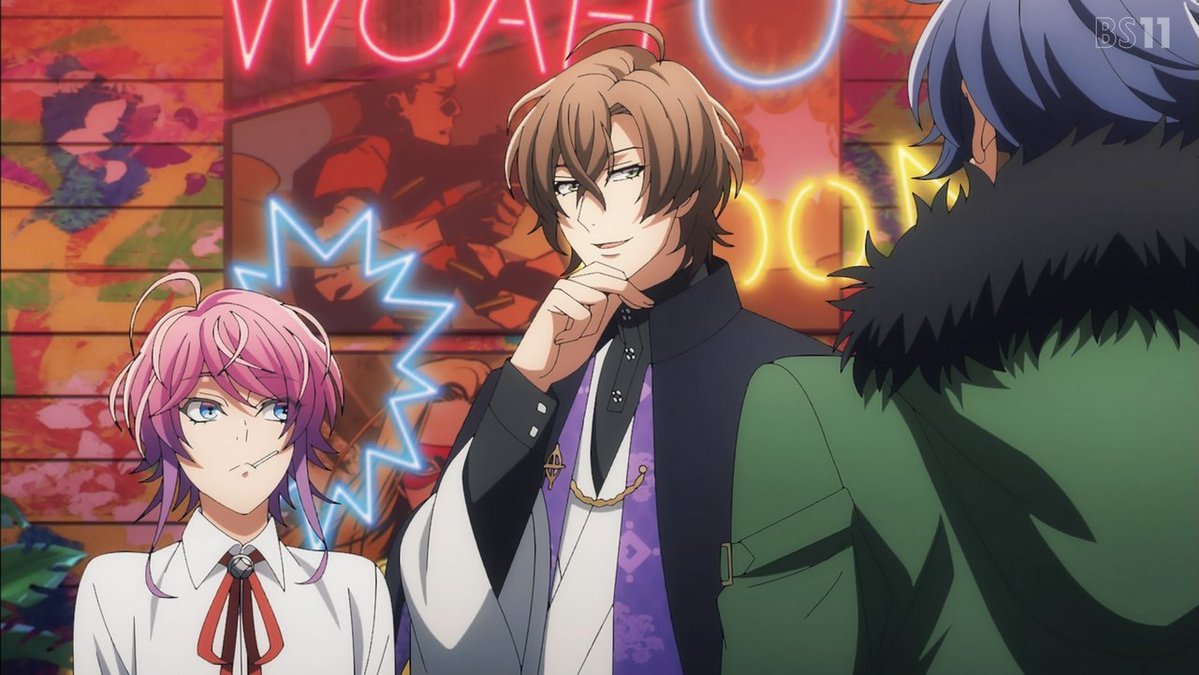 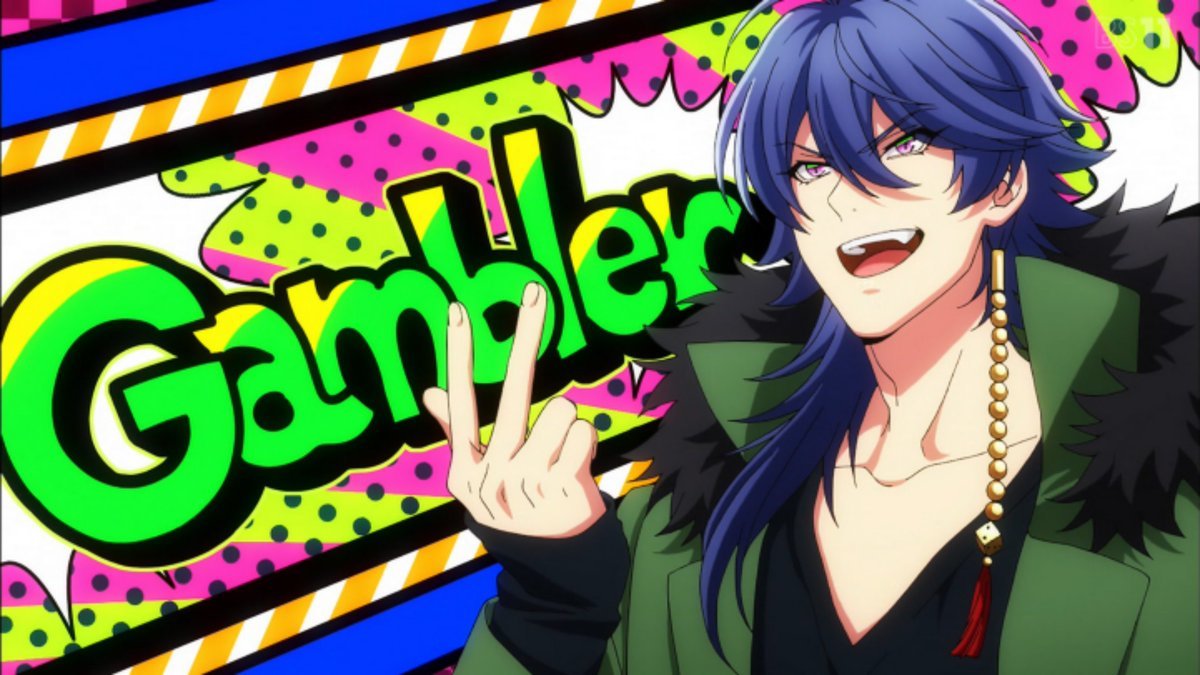 These three were very impressive to me with a happy rap scene, because Ikebukuro and Yokohama were a little serious! ……Well, they couldn’t make a lot of money after all but I thought the rap in this world was incredible. I mean, I would rather say the rap performed by these three was super cool! 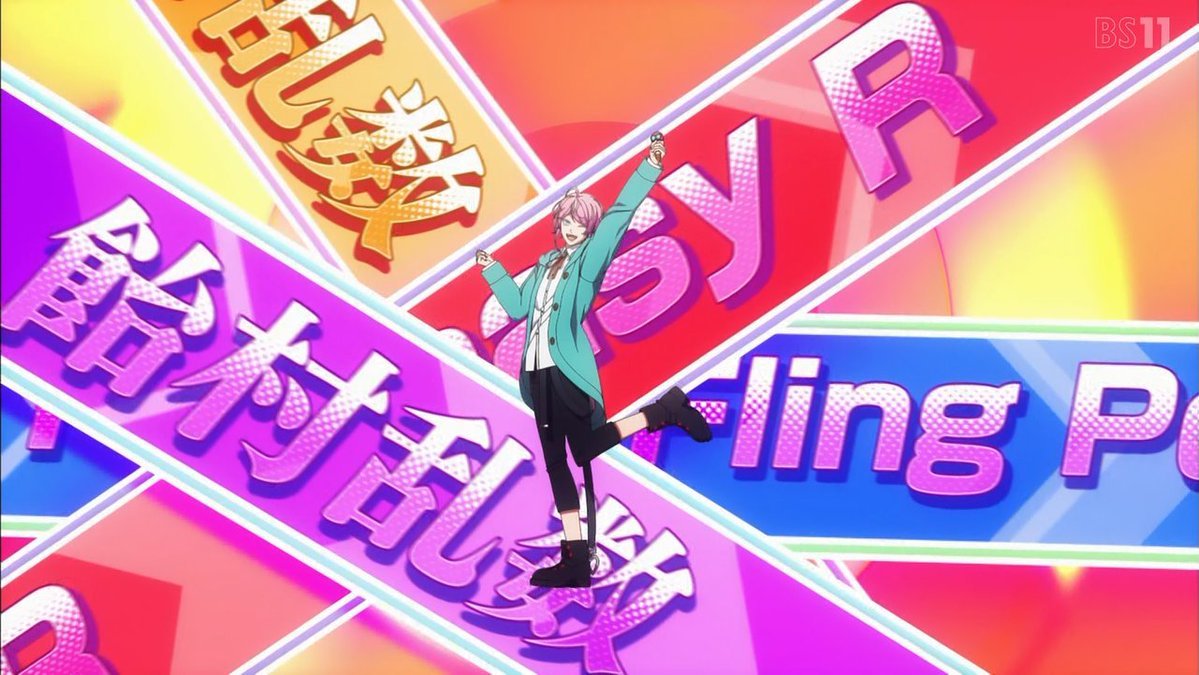 And as for Shinjuku, they get along well too but in a different way from the ones in Shibuya, huh? The doctor looked so gentle and I don’t really have the image about him singing the rap…… 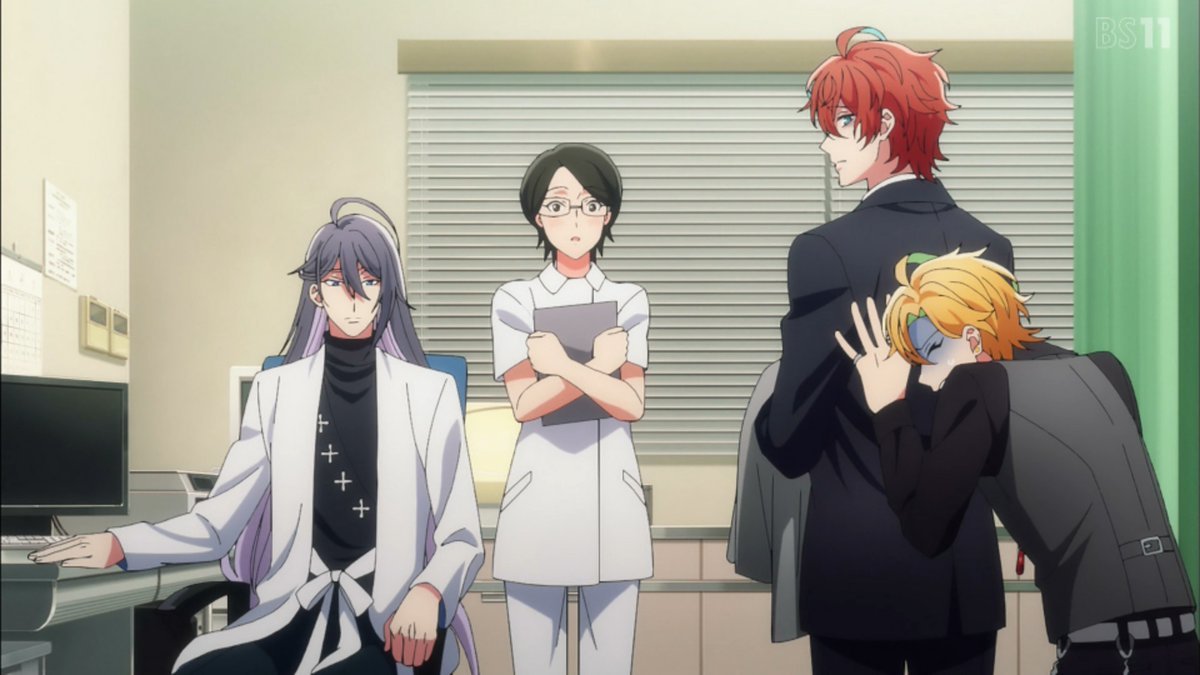 Well, that’s the gap, huh? The doctor, the office worker and the host…… These three perform the rap…… They had the perfect harmony and were super good at singing the rap part too!

That’s how they fought…… More details about such a flashy rap battle!

By the way, they have no weapons in this world, huh……??

Yep. As explained at the beginning of the story, it’s the world, where the Japanese Administration was taken away from a woman and all the weapons were taken away as well. Therefore, fighting through the rap battle is now required! 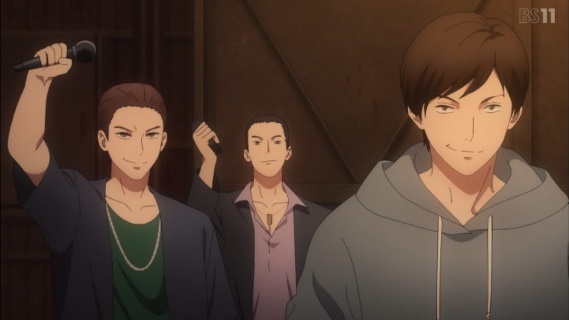 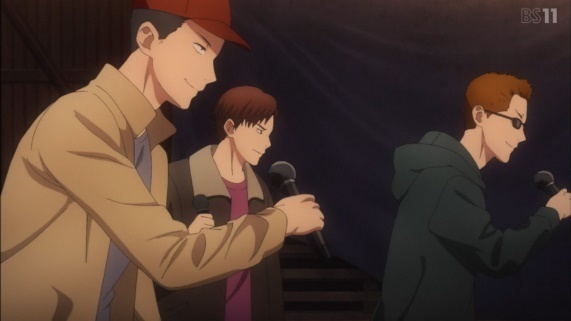 The scene, where they imposed sanction to those who committed a crime by the rap battle was super good, huh? The image was really awesome too!! The rap and the animation were perfectly matched! I want you guys to watch this rap battle scene at least. It was incredible, really!!! 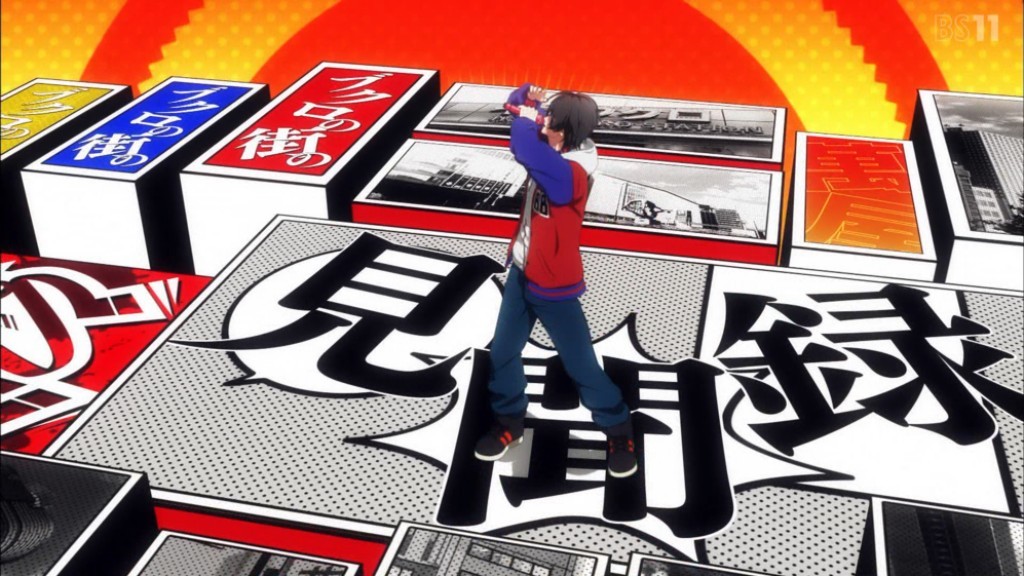 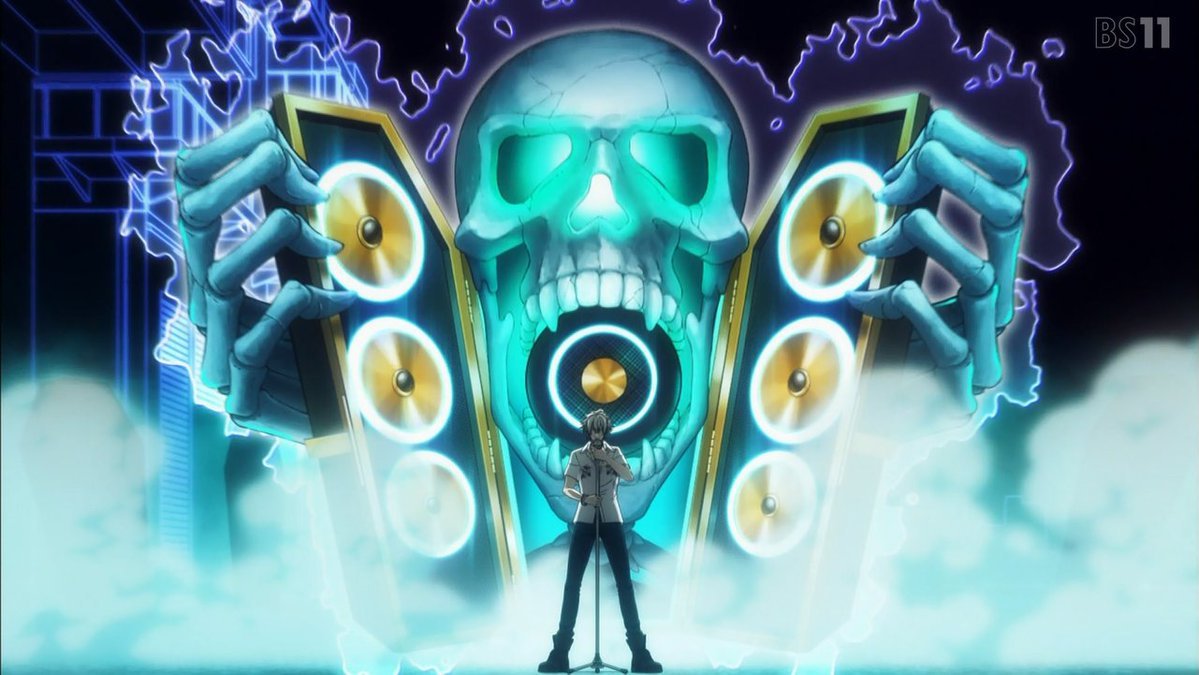 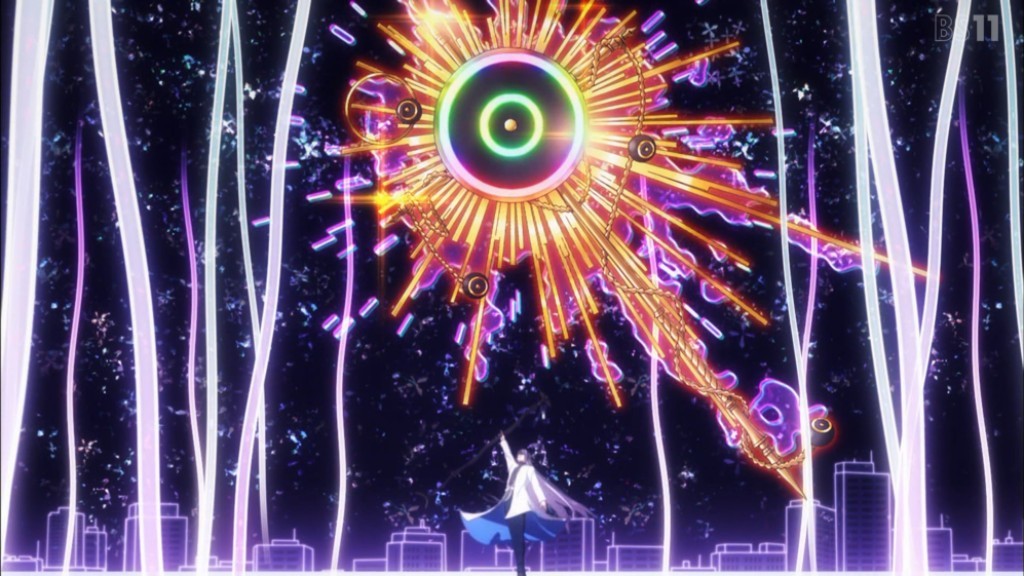 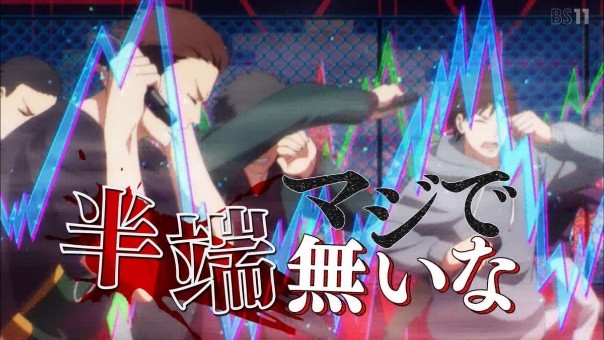 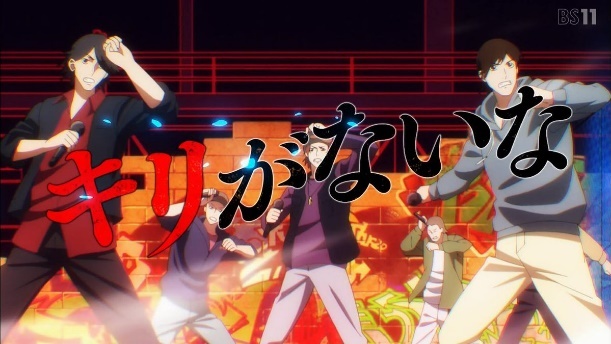 How should I describe…… it might be a bad expression but this, no? 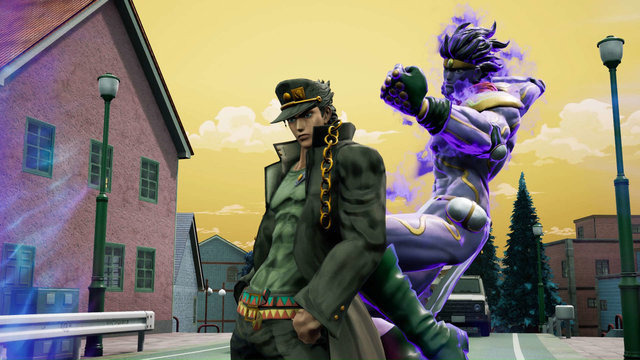 I agree. It’s the perfect image but not specifically, though!

Oh by the way, the illegal microphone, shown in anime…… The criminal man was going to use it as a modified weapon but…… 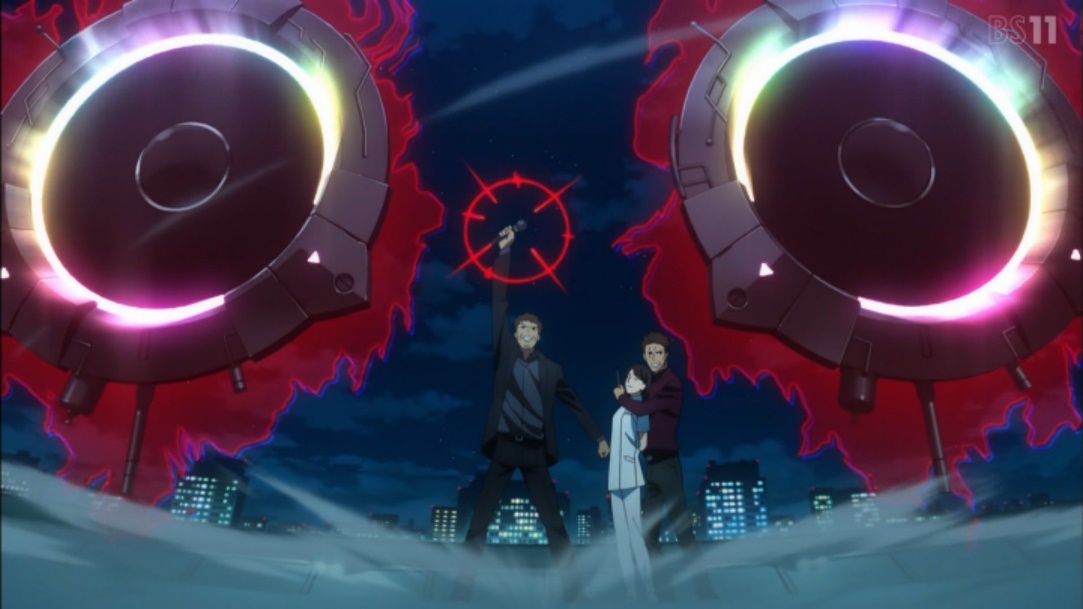 It wasn’t described clearly in anime but I should say that’s ‘the Hypnosismic, which is not admitted and provided from the government!’ Even though it wasn’t well explained in Episode 1, it will be explained more from now on so for now, just remember this word.

Got it. But yeah~ The rap scene was really awesome…… Why did it always explode at the end? 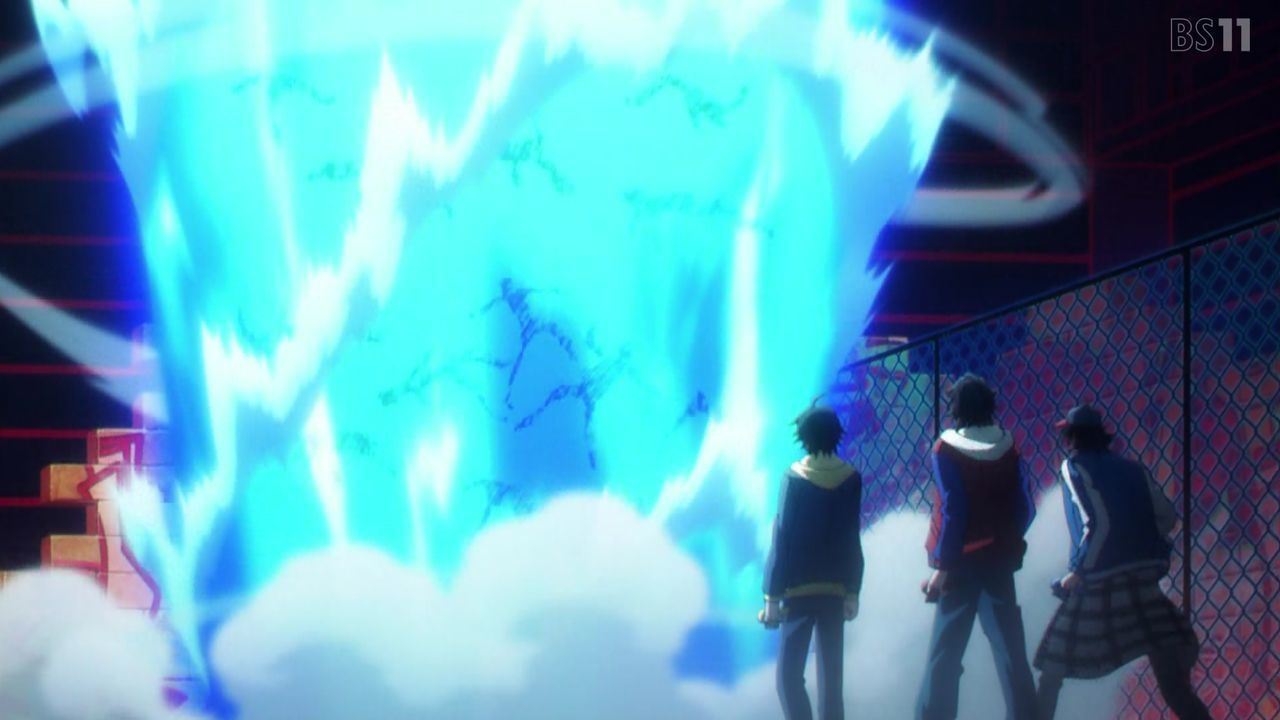 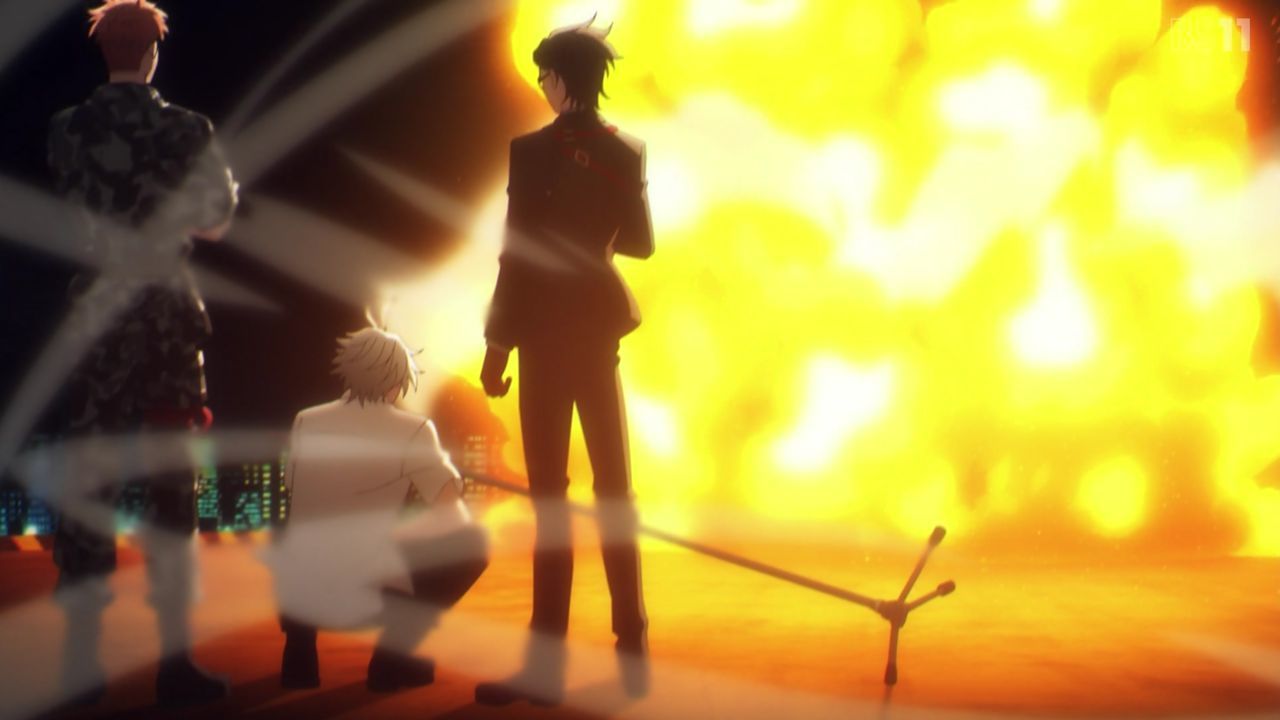 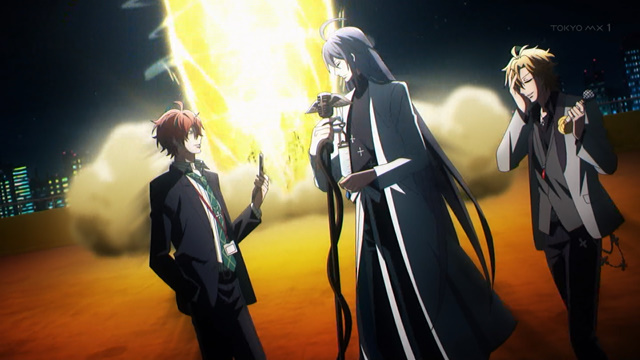 By watching it, we can have the image that the competition is over, no?

(While the weapons were taken away, the heating power of the mic could be a little high……)
Well, I see~.

Why those FOUR Teams to Fight? More Details about the History and the Current Situation! 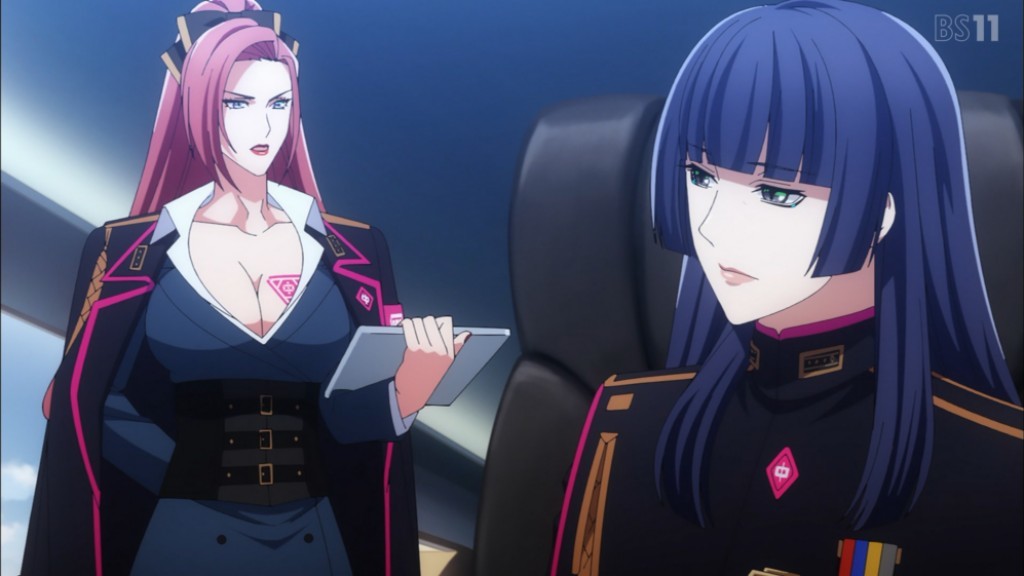 In this Hypnosismic World, the woman is governing as the President. So she limits the living areas of those who never stop to fight by taking away their weapons, huh? And the purpose of the Division Rap Battle is to let such men release any complains by fighting through the rap battle in each division?

Yes, pretty much. Well, she does have another speculation, I guess…… The winner will get huge prize money too, huh?

Well~ I wonder which team will win…… In the CD version, Shinjuku won, right?

Yep, they did after the fans voted…… I wonder the same team will win in anime too…… We can’t wait to see which team will be the winner through the division rap battle, huh??

I’m now so into this series, so I’ll definitely continue to watch it from now on. For those who haven’t watched Episode 1 yet, please check it out! It was such an awesome anime!

Already now! This is all for today!
We’ll see you all at the next article~! Bye now~!!
Hypnosismic