Hello, everyone. My favorite character in Twisted Wonderland is Vil Schoenheit-Sama. I really root for him, who does everything he can to keep his beauty. It’s Saori from Otaku Republic. 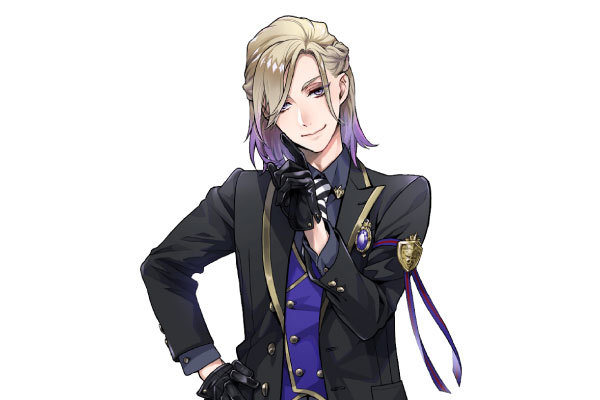 Hello everyone. Ever since it got frozen when I was playing in the battle of Twisted Wonderland, I haven’t even touched it. I’m Otaku Republic’s Boss. 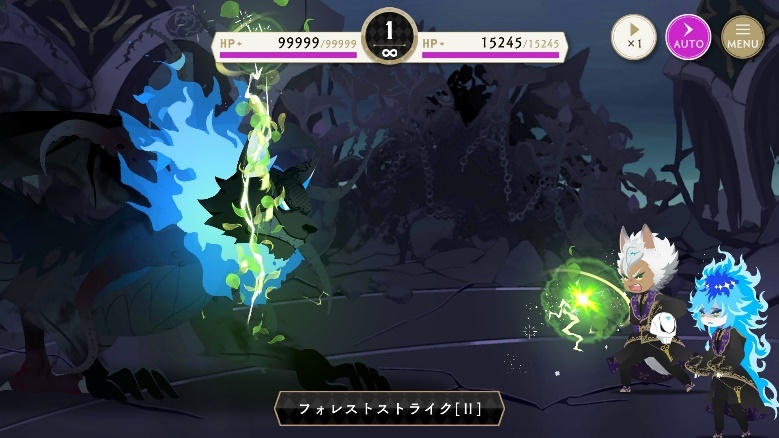 I bet it’s been fixed by now, no?
Twisted Wonderland is now super hot in Japan and you should try it too! 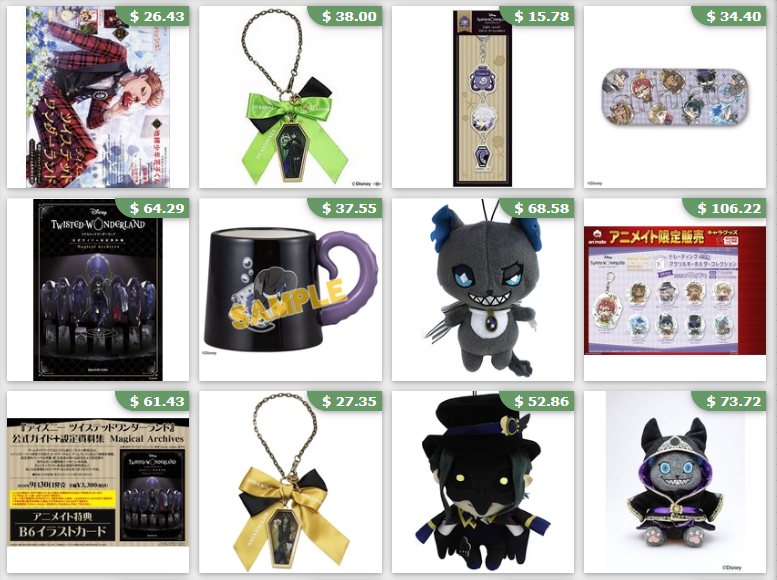 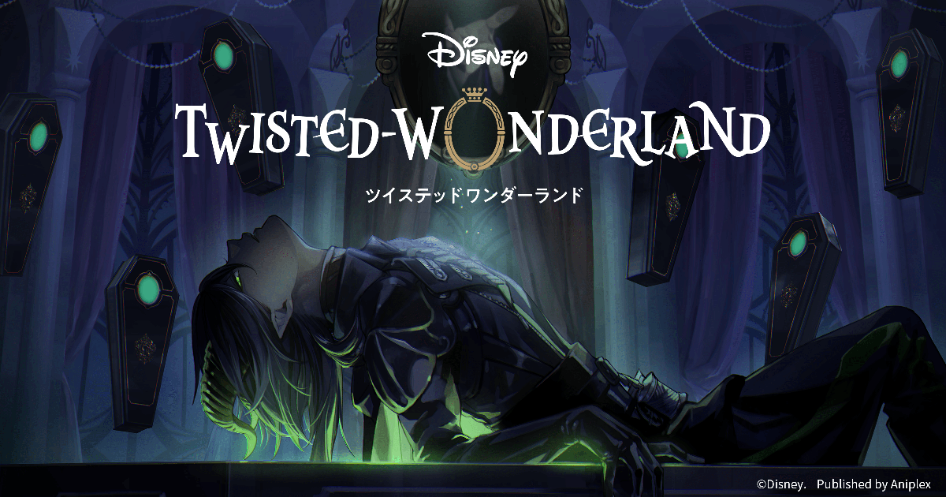 The relationship of the two --- Classmates and Rivals! They are in tune with each other and both are dependable 1st grader buddies, who can hang out with the player! 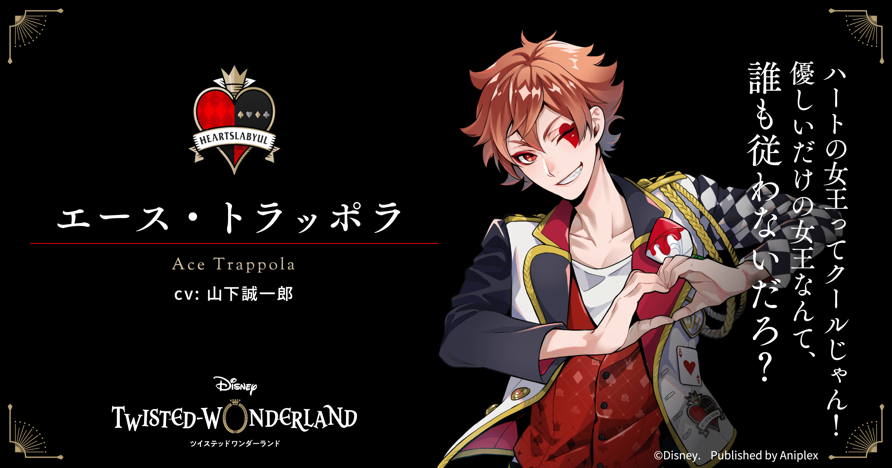 Ace Trappala is a first-year student in Heartslabyul Dormitory, inspired by a card soldier from the Disney film, Alice in Wonderland.
He’s clever and a little mean. He tends of skip classes or bothersome things. However, he is so caring that he takes care of the player who is in need.
In the limited edition event called “Ghost Marriage”, which took place the other day, Ace played the main character of the story, where he, with a ring, exerted himself to “propose” to the ghost princess, who intruded on the school. 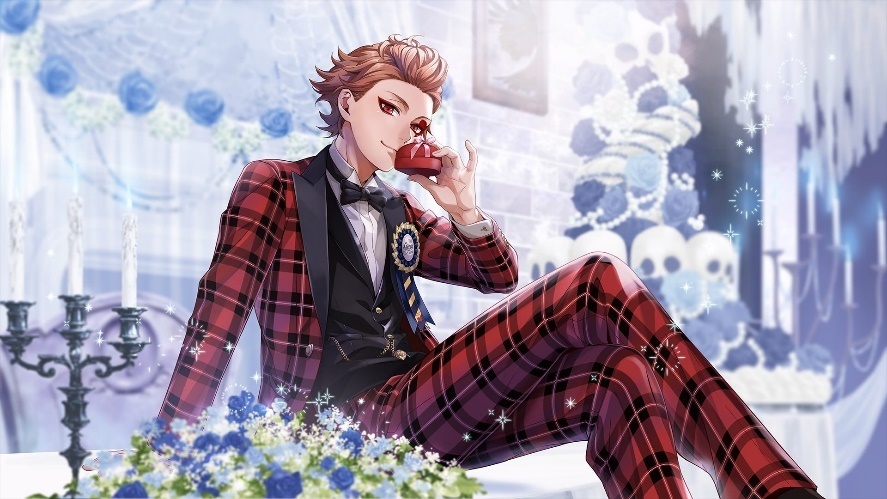 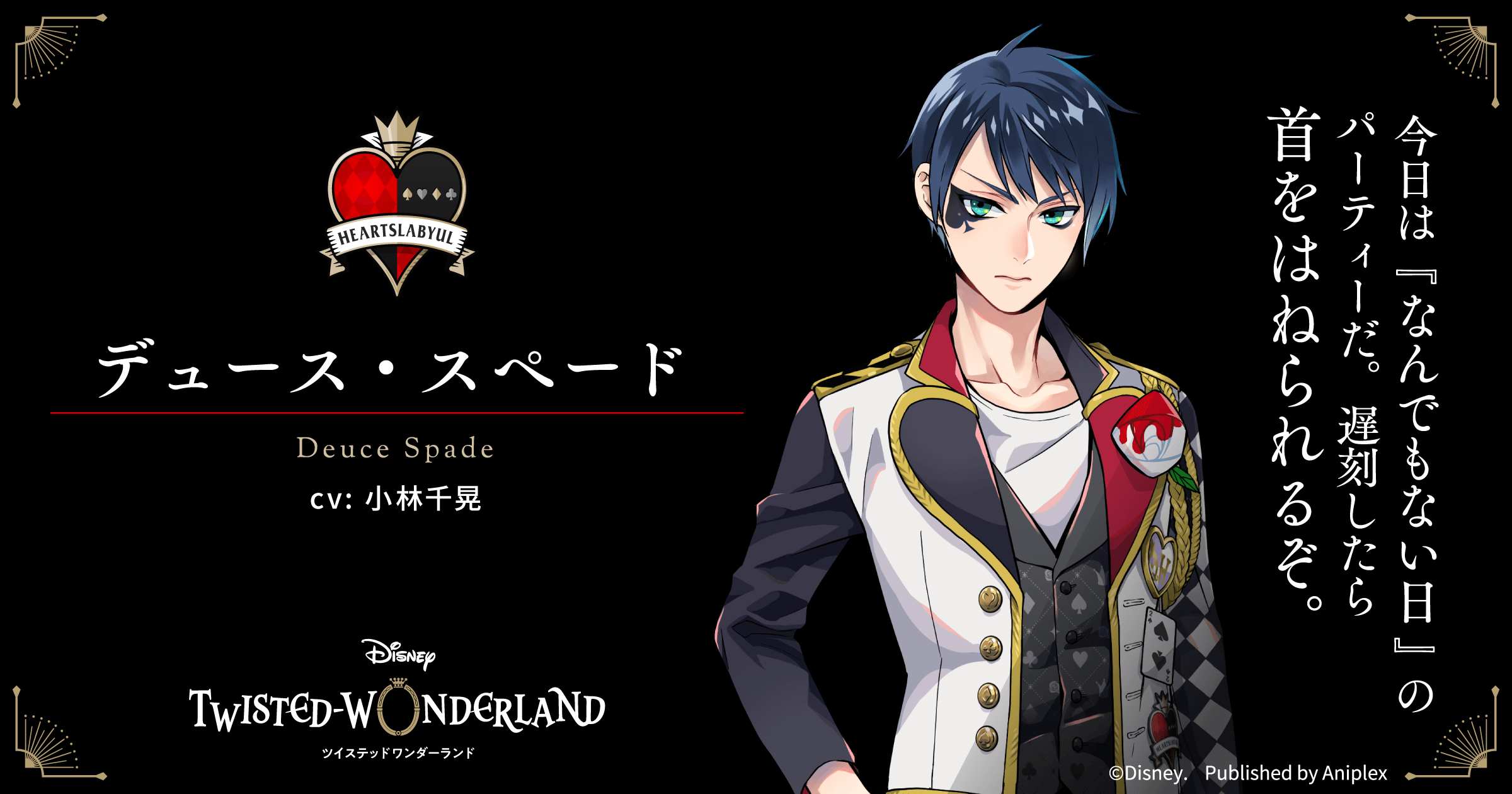 Deuce Spade is also a first-year student in Heartslabyul Dormitory, inspired by a card soldier from the Disney film, Alice in Wonderland.
He is very serious, but a little disorganized. He even thinks about things too seriously that everybody around him gets surprised at him. (so-called. a bit off) He enrolled in the school aiming to become a powerful mage (wizard) but ends up having hectic days with the player, who tends to get involved with troubles. 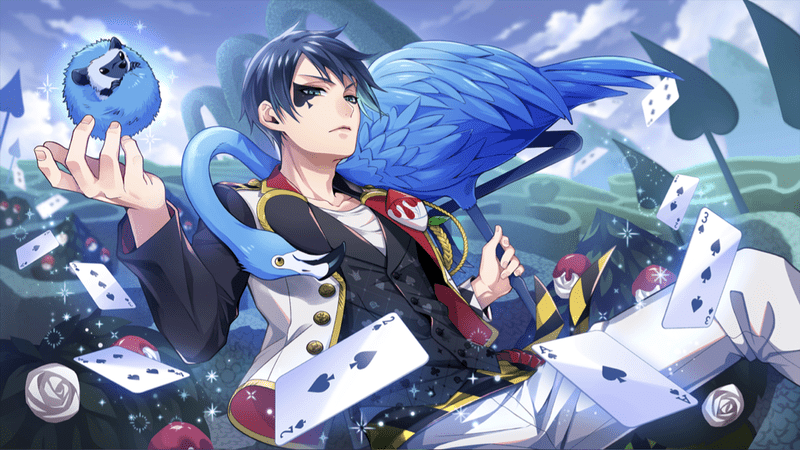 These two characters have been dependable buddies who can solve various troubles, hanging out together, ever since they became friends with the player in Chapter 1! They are so caring that they often help the player, who has got lost in the different world, even though they are still first-year students.
Breaking News!
Deuce-Kun will reportedly play the main cast in the next limited edition event called Wish on the stars ～Dance & Wishes～! Congratulations!! 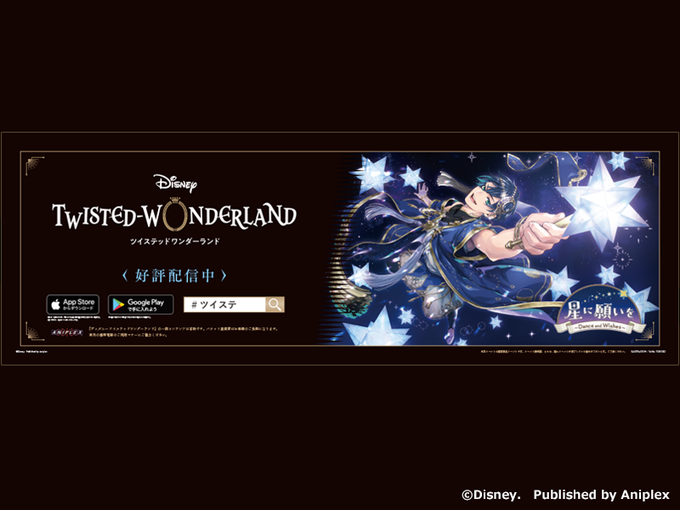 By the way, if you have these two pair up in the battle of the game, they will become a combination, which can trigger a powerful magic called DuoMagic! (The pair differs depending on the costumes.)
Make sure DuoMagic is a super powerful magic, which you can trigger only when you pick the designated pair, so I’m sure they will play such an active role if you’re fighting with them! 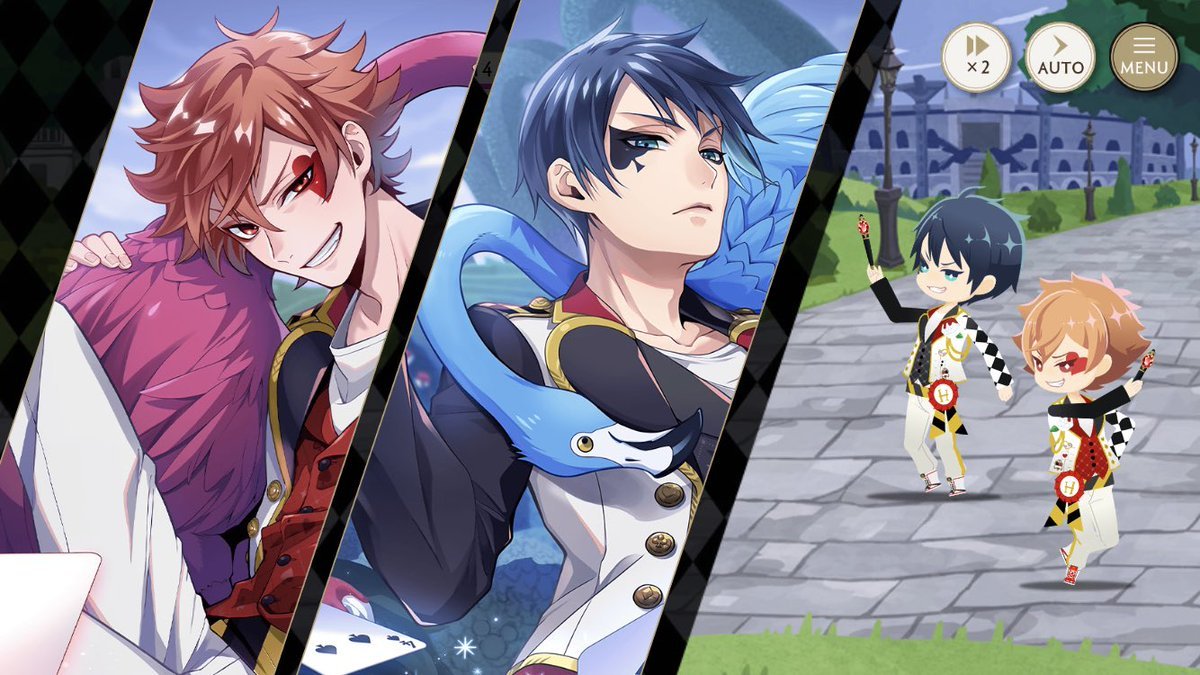 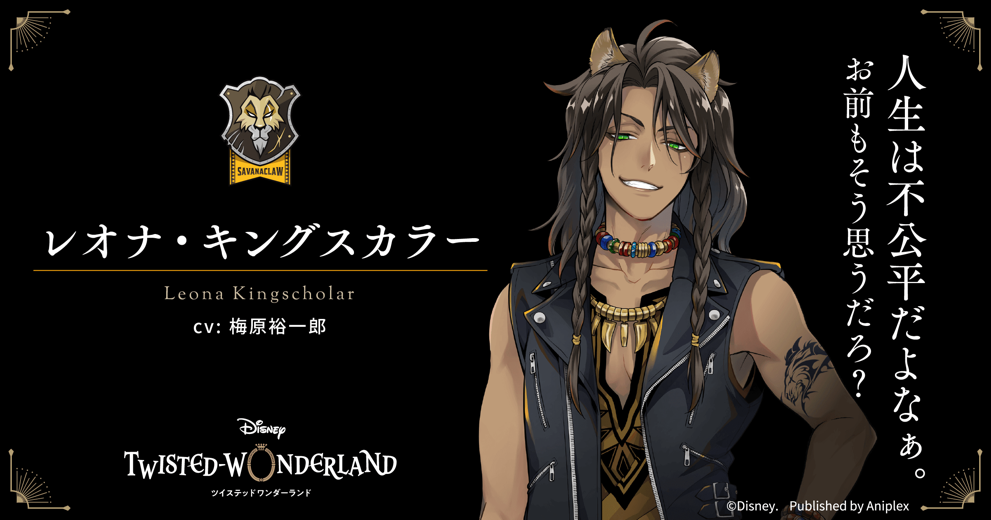 Leona Kingscholar is a third-year and the leader of Savanaclaw Dormitory. (He’s 20-year-old, though.) He is inspired by Scar from the Disney film, The Lion King. He is also the second prince of his home country.
While he has great magic powers, he constantly appears lax and leisurely, and makes effort “to play hooky”. He will do anything “to achieve the victory he desires eventually” so he avoids playing a serious match or making steady effort. Even though, he wouldn’t get lost if he means it since he has an outstanding power, magical power and brain.
In the limited edition event called Fairy Gala~Festival of the Spring-Calling Fairies~, he will play the main cast of the story. Even though he appears lazy, he seemed to be practicing hard to participate in the fashion show by the fairies who are welcoming the spring. 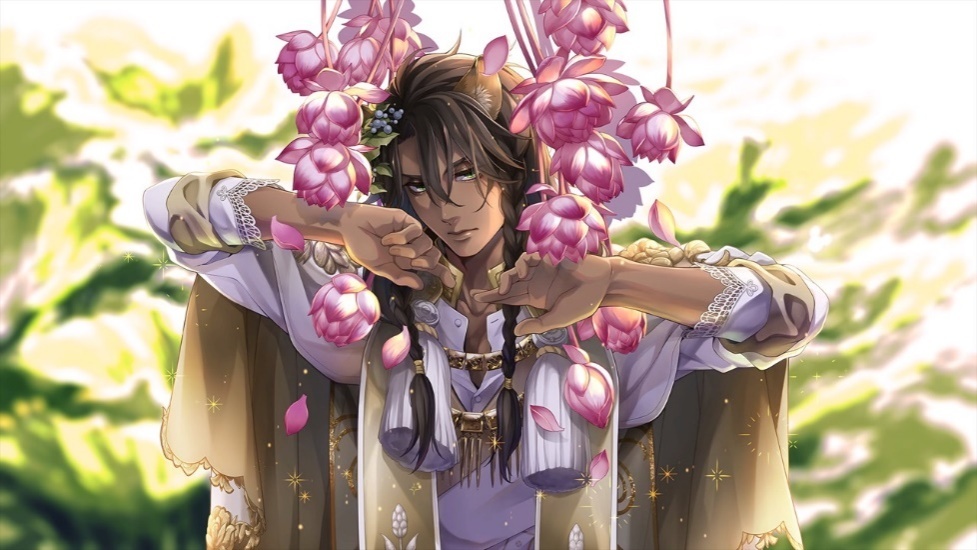 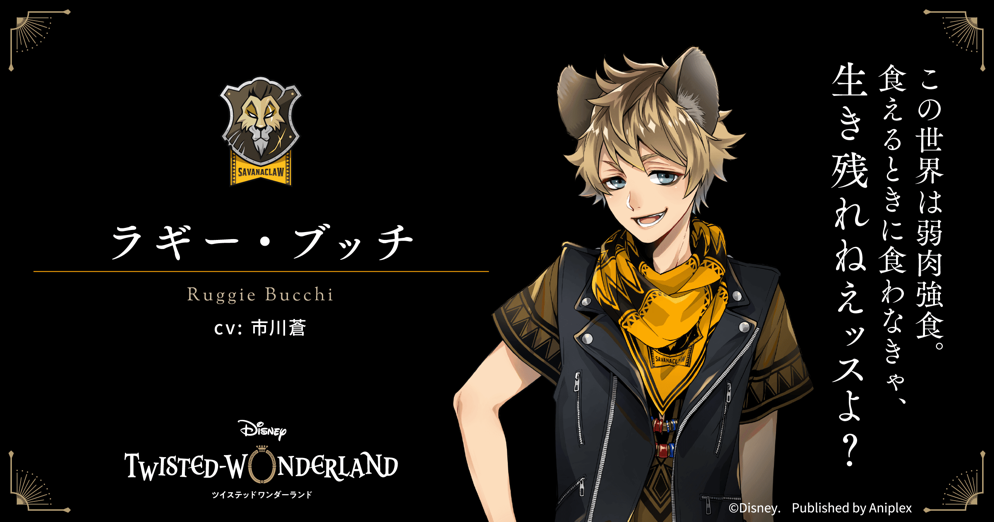 Ruggie Bucchi is a second-year student in Savanaclaw Dormitory. He is inspired by hyenas from the Disney film, The Lion King as well.
Due to having grown up in a poor environment, he is a thrifty person and seems to be calculating.
Even though he is always taking care of Leona as if he is his servant, he does that not because he respects him but because he knows he can get allowance or leftover from him. His favorite class is the alchemy and even makes money from selling synthetic gold or beautiful jewelries. Also, he is good at cooking and he even has a good reputation that he can make easy, quick and delicious dishes from whatever the ingredients that he has.
In the limited edition event called Fairy Gala~Festival of the Spring-Calling Fairies~, Ruggie played the assistant role of Leona. By the way, he didn’t volunteer to become the assistant role but was forced to do that by Leona. 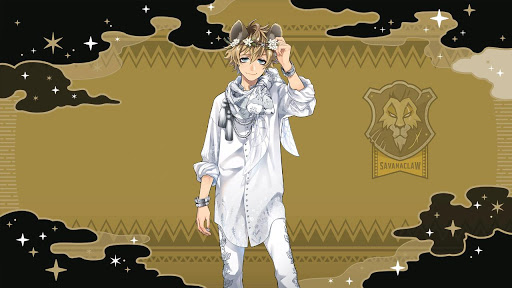 There’s nothing like a sense of loyalty between them but they do have a relationship with benefits. Whenever they have a trouble, they can mercilessly discard and betray with each other, which makes us feel heartwarming! It’s an awesome pair-up! 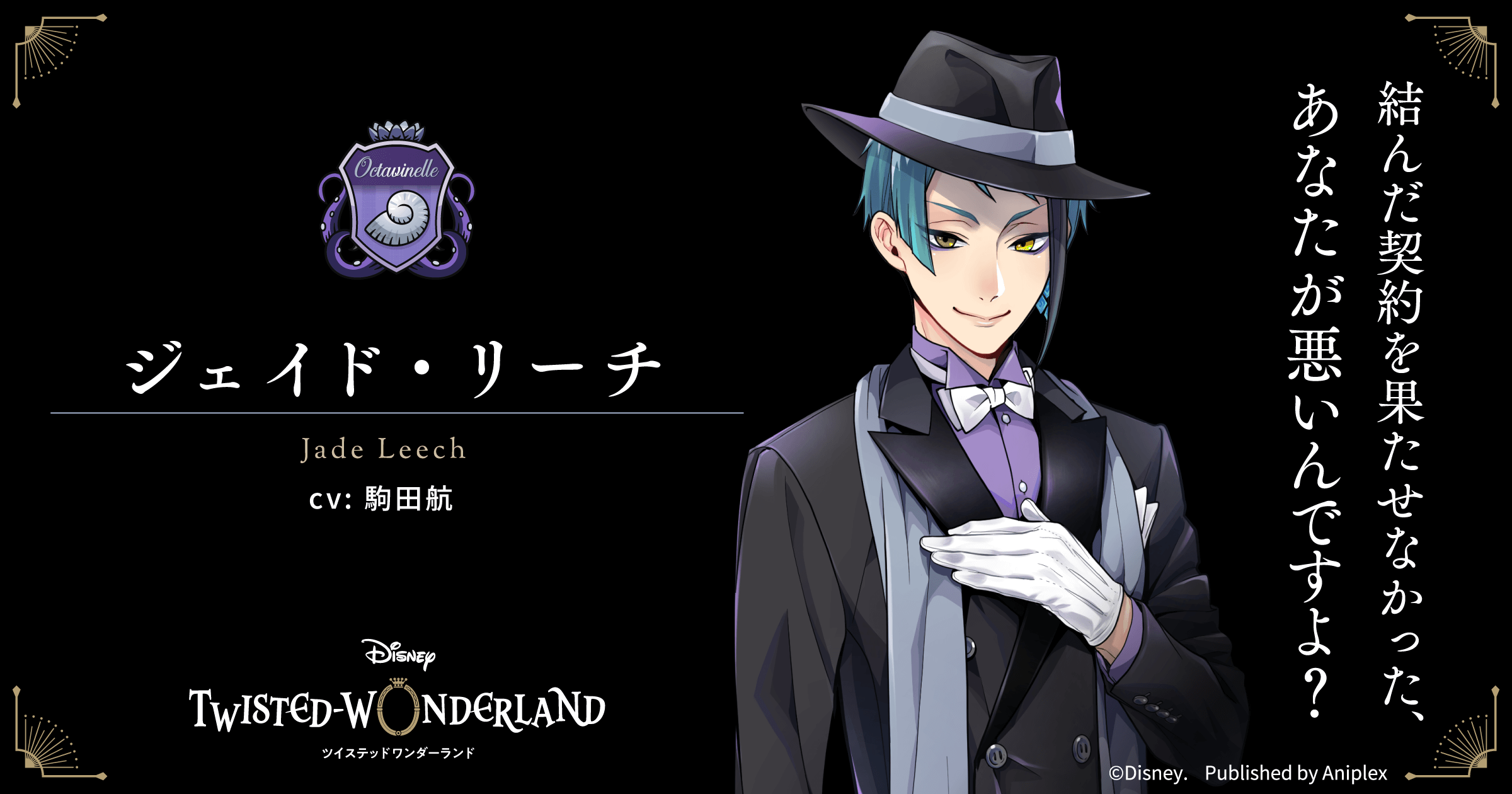 Jade Leech is a second-year student, and the vice head of Octavinelle Dormitory. He is inspired by the twin moray from the Disney film, The Little Mermaid.
He acts very polite and gentle, always using formal words. However, he is actually an evil-minded person. Whenever he finds an interesting crime, he positively tries to get involved in it or watch over how it gets worsen with smiles on his face. He is evil like that. He’s Floyd’s twin and they both were born with characteristic odd eyes. 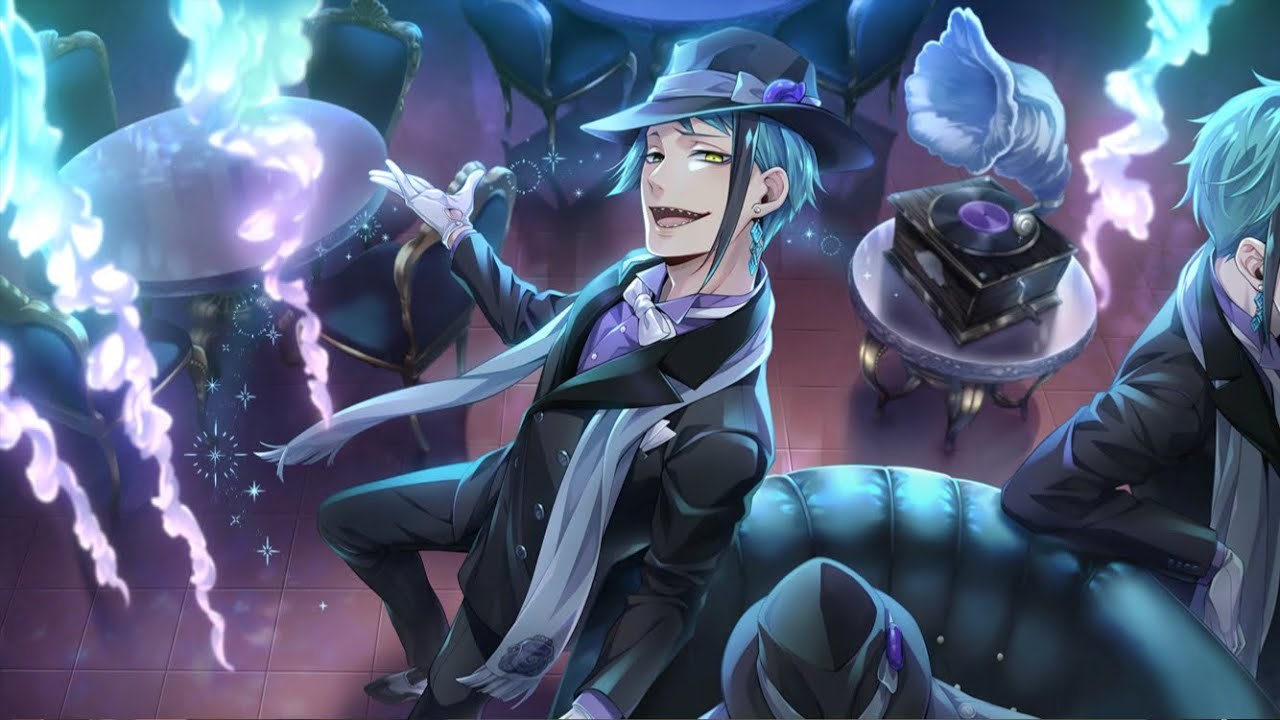 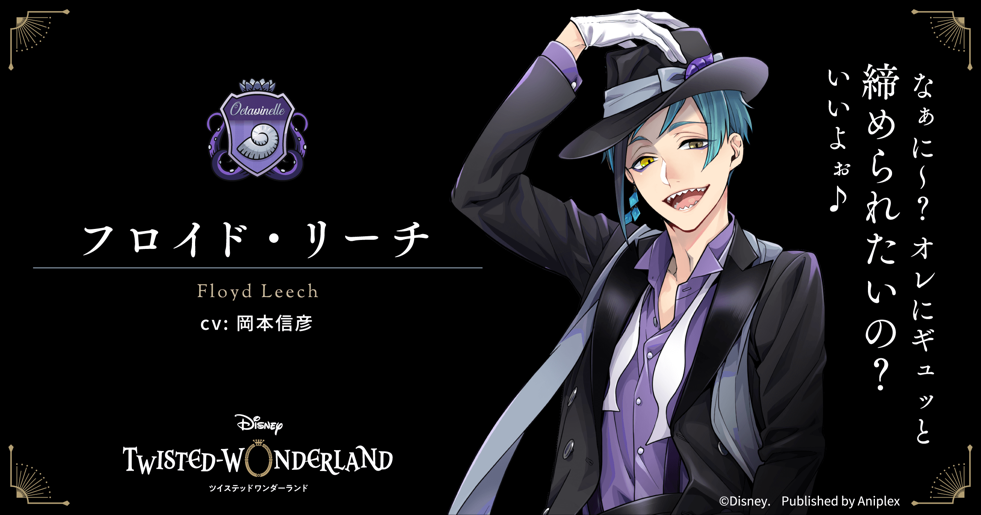 Floyd Leech is a second-year student in Octavinelle Dormitory. He is also inspired by the twin moray from the Disney film, The Little Mermaid.
He is very fickle and free-spirited. Even though he is good at sports and studying if he is motivated, he tends to get tired of them quickly. He is well-known for fighting frequently, and he says things the moment that he thinks of it. He is also famous for giving people weird nicknames, and calls the player “Koebi (shrimp) –chan”. 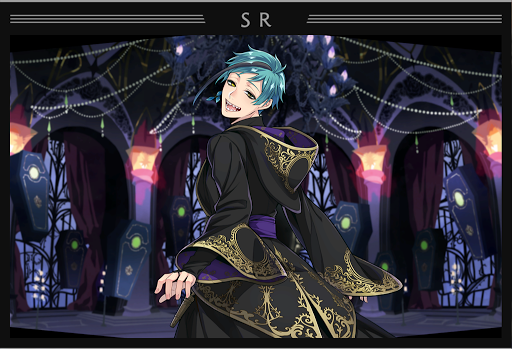 Since their characters, who they got inspired from, are the twins, they usually hang out together. Even though serious Jade seems to be controlled by free-spirited Floyd, Jade is actually enjoying various troubles happening around them more than anybody! 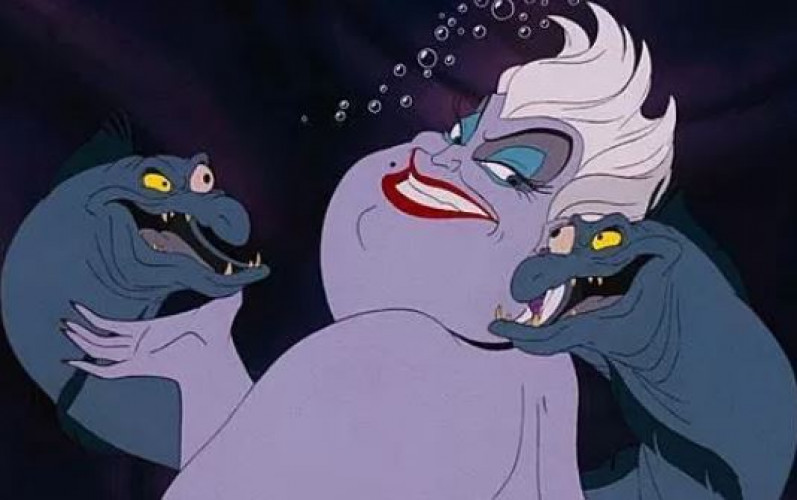 Of course, these two could be the pair, where you can use a powerful magic called Duo Magic as well (depending on the costumes), and if you connect the costume cards together, it will become one picture! How luxurious! It’s not too much to say that they are the best combination in perfect sync! 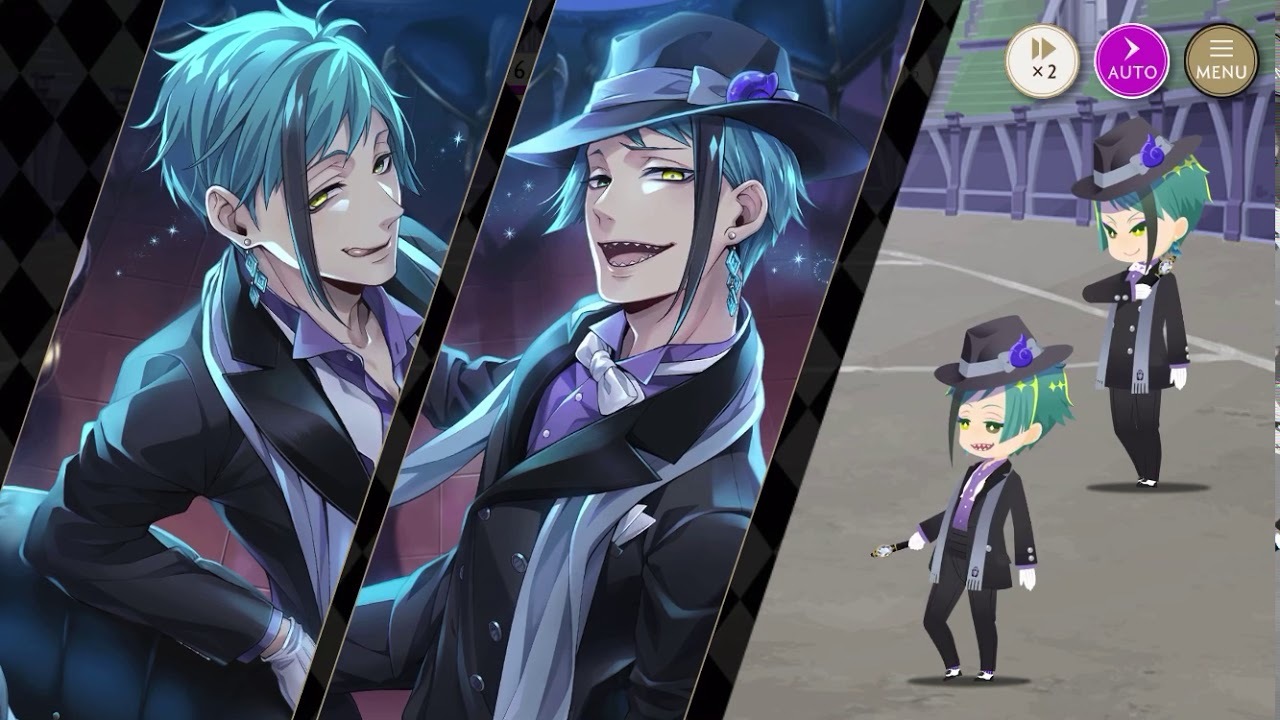 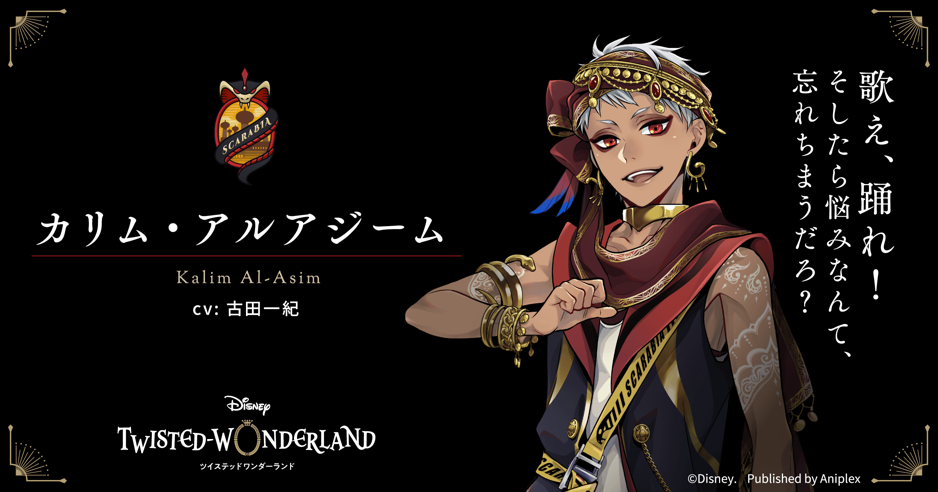 Kalim Al-Asim is a second-year student and the head of Scarabia Dormitory. He is supposedly based on the Sultan from the Disney film, Aladdin. (There are lots of inspiring elements from Sultan.)
Born into a wealthy merchant family, he grew up in easy circumstances. However, he has been targeted at life many times.
He is very cheerful and has a high communication skill but doesn’t understand what people say. Since he can’t leave those in need, he give them a hand no matter who it is. That’s why Jamil often warns him. He loves parties so much that they hold a party in Scarabia Dormitory, even if they don’t have anything particular to celebrate. Kalim would never eat anything that Jamil didn’t make due to a particular reason. 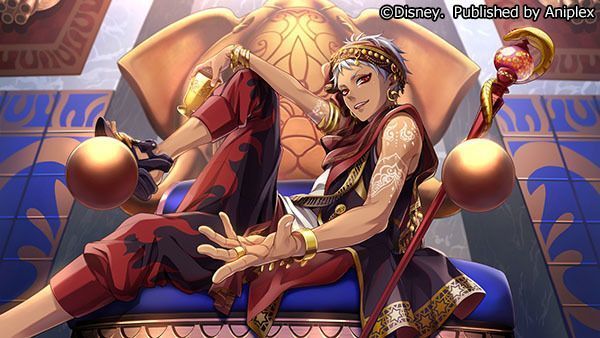 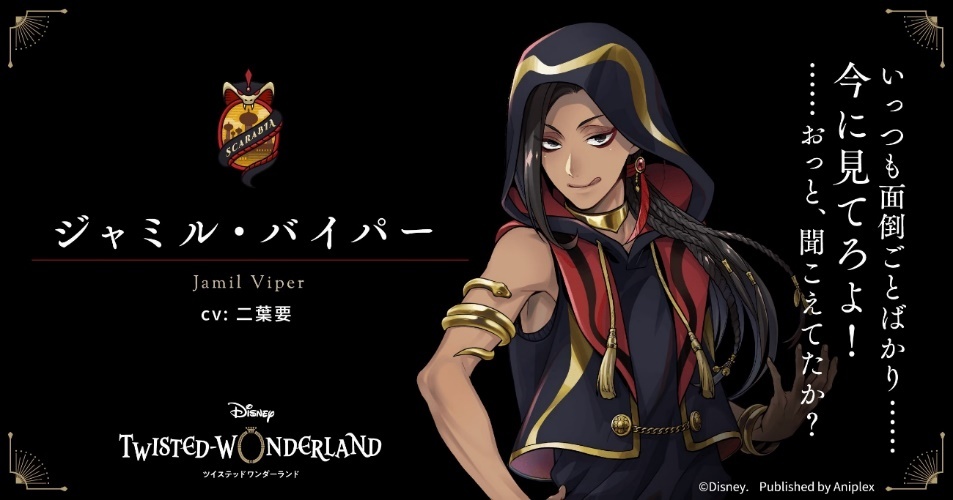 Jamil Viper is a second-year student and the vice head of Scarabia Dormitory. He is inspired by Jafar from the Disney film, Aladdin.
His ancestors have served Kalim’s family generation after generation, so they have a master-servant relationship. He is calm and has a decent personality but always has a hard time dealing with troublemakers around him (especially Kalim). He keeps “the average” score on his grade. He is good at cooking and Kalim only eats what Jamil makes. 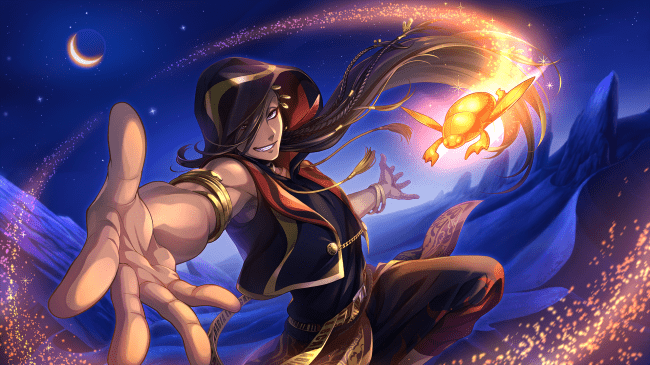 Since there are (currently) only two students in Scarabia Dormitory, they hang out together all the time. Actually, since the way Kalim acts is always unpredictable, Jamil has to watch and help him out just like he is his real servant…… Maybe they have a little too “overprotected” relationship?

Even though they have a master and a servant relationship, they are usually good friends, casually chatting and saying sarcastic things to each other! When they had a trouble in the limited edition event called Fairy Gala~Festival of the Spring-Calling Fairies~, they tried to solve the issue, supporting Leona……! In the main story, we’ll see a change in their relationship, though…… 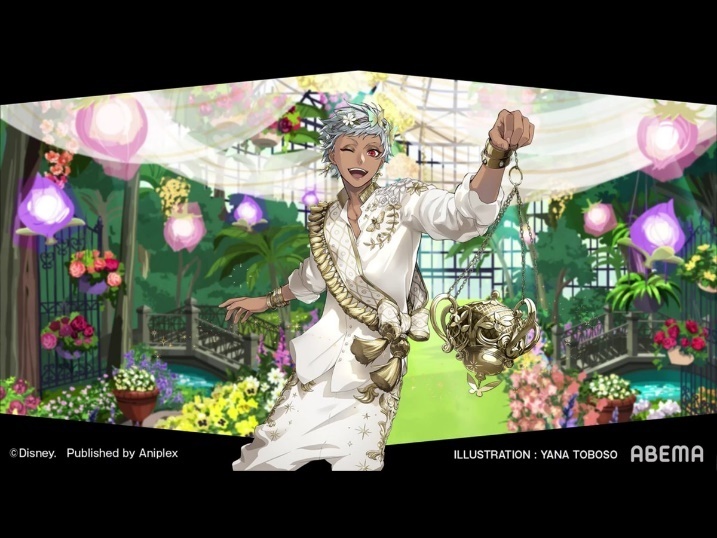 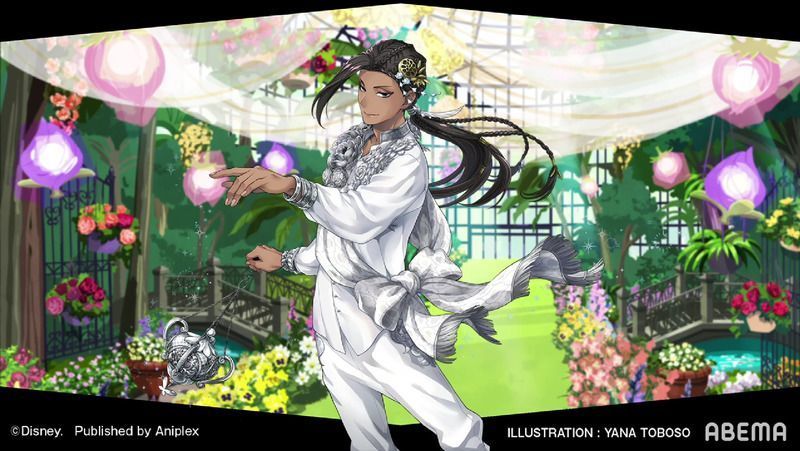 (It’s becoming quite long so……) This is all for today!

I think I’ve seen some of them! Some of their animation commercials have aired recently and they went viral in Japan, huh? 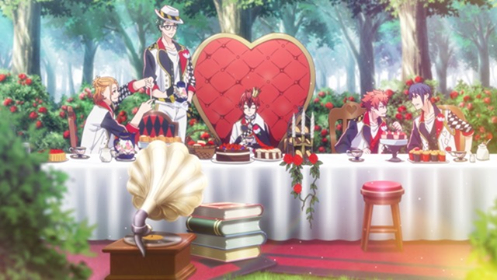 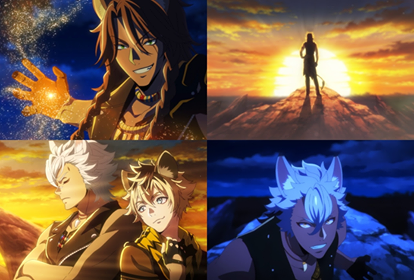 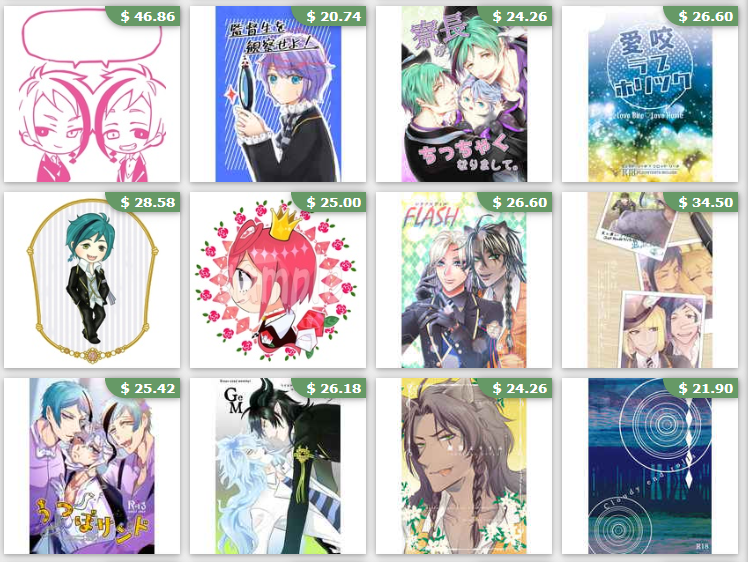 Already now! This is all for today! We’ll see you all at the next article!
Bye now~!!
Twisted Wonderland