Autumn is the best season for reading, or fantasy?!  A special article for the light novel anime!!

★Outline of the last article

Japanese autumn is the best season for ‘sports, eating, art and reading’!

Why has it been said in Japan?  I wrote the special article about ‘sports anime’ with the reason why♪ヾ(｡・ω・｡)ﾉﾞ。

And this time, I’ll write about the history of other two things, ‘art’ and ‘reading’ (*｀д´)σ=σ!

■Autumn for art and reading

「灯火親しむべし」, meaning “We should enjoy the light.”

Definition: Autumn night is cooler and has a longer night compared with summer night, so it’s the best time for working under the light, such as reading books or drawing pictures.

This saying is becoming common, and we have come to hold various art contests, exhibits and some events in shrine in autumn!

By the way, I’m now writing this Press in ‘autumn night’ too!

I can sure make good progress being comfortable with the cool air and a beautiful song by some bell crickets outside the window! “φ(･ω･｡*)

I just couldn’t concentrate on working with it being too hot and with the loud song of cicada on summer night, you know...?

I can feel how wonderful autumn is like in my daily life!

And now, I’ll share the autumn Saori Press ver. 2 with you guys!

Autumn is the best season for reading, or fantasy?!  A special article for the light novel anime!!

I’ll give a clear explanation to you guys.

I’ll shared some anime whose original are light novels with you guys with my (Saori’s) preference, desire and energy which can blow my depressed feeling away after being shocked to see my weight on the scale after I ate too much in the best season, autumn is for eating!

“This sure is a game but never be ‘playing’”

For example, when I’m playing the game, I sometimes think,

Then what if “you would have to die (GAME OVER ) in reality?”

This anime is about the story that 10,000 players being locked in the game for good until somebody gets ‘clear’. 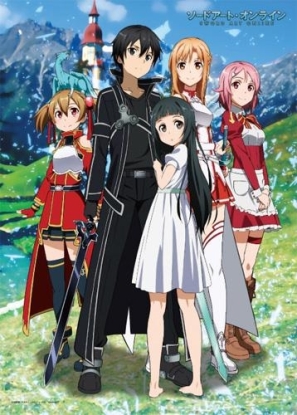 “Until somebody gets ‘clear’, you’ll be locked in the game which you could die in reality.”

What would you do?

When I actually play games, I try too hard getting to a higher level, being scared of the game over, and a status of the character ends up becoming strong until I feel the ‘lastbos (the last boss)’ is weak. 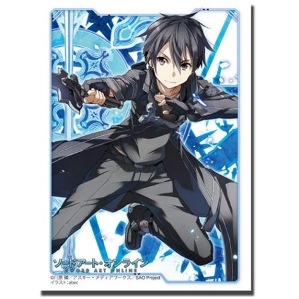 The main character of this story, Kirito-Kun has a hard time getting a ‘game clear’ being scared of death at first too, but he starts to conquer ‘Dungeon’, encountering various people and becoming mentally, physically strong with buddies he gets.

He’s been good at knowledge about the computer system since he was little, he keeps good results from other games too!

You can see his ability in the online game, ‘Sword Art Online’, (where he would be locked in), where he could get the skill called, ‘Dual Blades’, which are given to the person who has the fastest reflexes...!!! (●ω●;)

And a girl who supports such a super guy is Asuna-Chan who has unequaled beauty and strength! 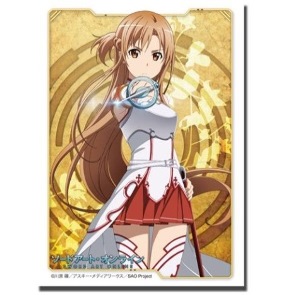 She is beautiful, cheerful, a good cook and strong.

But, at the same time, she unexpectedly shows us being cute, and not conquering any horror floors since she’s scared of ghosts.  She’s so lovely!

Two of them get over various difficulties, aiming for ‘game clear’ in the world where they can see full betrayal and sadness to death...! ( ﾟ∀ﾟ)

By the way, this anime has two Seasons; Season 1 is ‘Sword Art Online ver.’ and ‘Alfheim Online ver.’

Season 2 is ‘Gun Gale Online ver.’, which is now being televised!

Since the writer of this anime has played various online games before, you’ll see full of ‘online game aru-aru’ (materials which are familiar with online games)!

My friends and I would arrange time after school, to go home, turn on the computers, get together in the game and conquer Dungeon together... (ノ∀｀)  I feel nostalgic.

Even though this game, Sword Art Online wasn’t like the one I used to play for fun, I think it teaches us more about ‘how to live’ or ‘to have friendship, or partnership’ than we’re able to learn in reality.

“They are coming back to IKEBUKURO !!!” 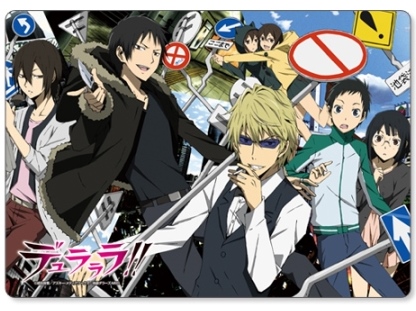 ‘The Headless Rider’ who wander about Ikebukuro night after night

‘Informant loving to watch people’ who declares that he loves all human-beings!

The stage of this story is one of the Japanese real cities, Ikebukuro.

But almost all the characters which appear in this story are “not normal!”

Most people who have read this anime say, “The appeal of this anime is characters which are too individual.”

Yes, they ARE so attractive.

They also said, “Once you read it, you can sure find the one you like most.”

“Even if the characters are too individual, the story would never mess up.

So we just keep reading it.  We just can’t wait to read the next episode!” too.

Ryugamine Mikado moved from a country area to Ikebukuro. (Right)

Though he started to live in Ikebukuro earlier, one of his childhood friends, ‘Kida Masaomi (Left) let Mikado know that there were some people whom they must not antagonize in Ikebukuro. 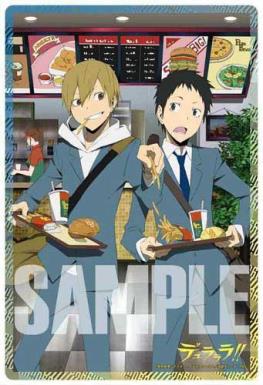 Heiwajima Shizuo (Right) is a debt collector and a super strong fighter.

And Orihara Izaya (Left) is an unidentified informant. 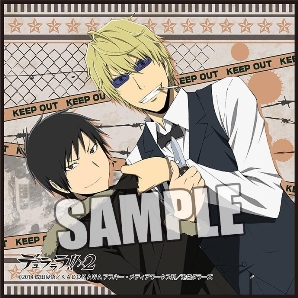 Someday, Mikado, who heard the scary thing, met someone in Ikebukuro.

They were ‘The Headless Rider’ who have been rumored as a ‘Living City Legend’ in Ikebukuro! 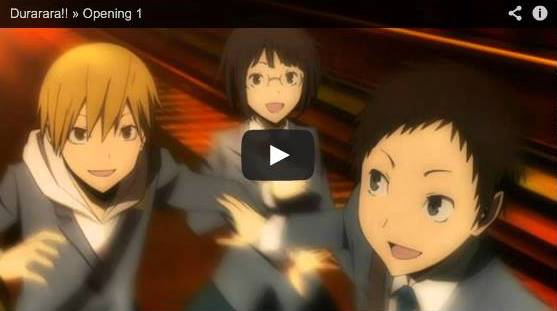 Yes!  The staff, who used to work on the last anime, and ‘BACCANO!’ the original writer of this anime, got together and completed it!

The story of this Durarara is a little related with the last anime, BACCANO!

Many staff who made this anime understood the work the original writer made!

If anybody who knows about BACCANO!, they might grin at some scenes of this anime... 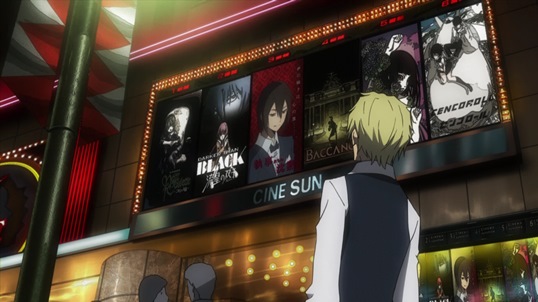 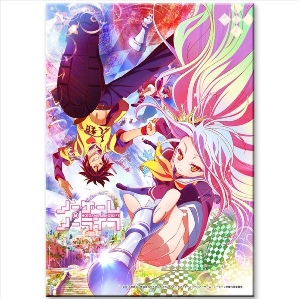 Everything starts with the game.

There was a genius game player who had a record that has never been lost in any kind of games on the web.

He is a big brother who is good at reading peoples’ mind, negotiating, strategy and getting unsettled.

She is a little sister who can beat the newest computer who had undefeated record of playing chess, with her gifted brain.

They were conquering every single game, working together.

It’s ‘the world where everything starts with games’.

The world where 16 different kinds of tribes live.

But people living there hear that the world has destiny to be ruined if they lose another city since they keep losing games with other tribes.

Even if that’s a different-dimension world, it’s a game!

The counterattack of ‘Human-representative’ by two people wanting to keep the strong names will start here!!!

This is a rough outline!

The charm of this anime is of course, ‘how we conquer the different-dimension world game!’

For anybody who thought so!!

I’ll introduce a part of the lineup of games they tried!

・guessing game to guess a gender of passersby

・shiritori (a word game in Japan in which one player has to say a word starting with the last syllable of the word given by the previous player.)

This is a game that different tribes from human in a different-dimension world challenge us ‘to ruin us, human’.

Of course they challenge us by using ‘tactics that they can make use of their own special ability’, or ‘changing the rule a little bit so that human (having just normal abilities) will have disadvantages’.

Wonder how the two genius players will conquer them...?

Wonder how they will beat them...?

That’s the very charm of the anime! 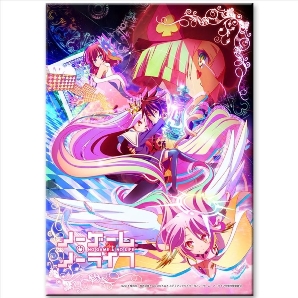 But!  There are only 60 percent of the tense scenes like ‘a liar game’ in this game.

The other 40 percent of the scenes are about exchange among all the characters which makes this story more charming, in other words, they’re like gag scenes, so you can watch the whole 12 episodes just for fun!

Even though it’s a gag anime, it’s also a serious and real game anime!

Why don’t you guys visit and watch their tactics of this passionate game!

And...., to tell you the truth, do you know that there is an arcade game, which some of the characters of the light novels I introduced here, appear? 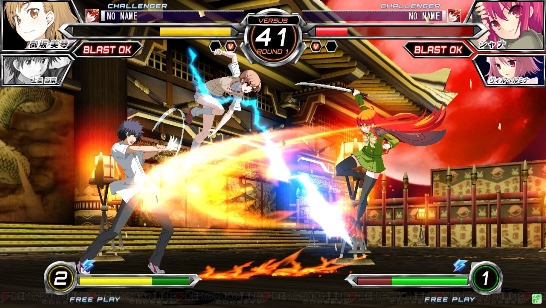 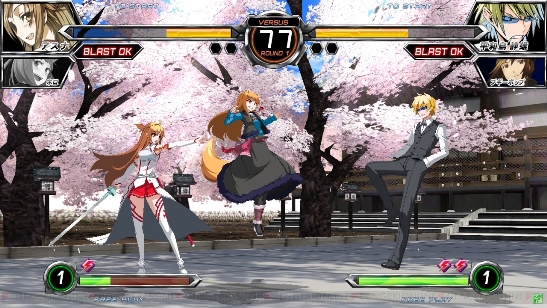 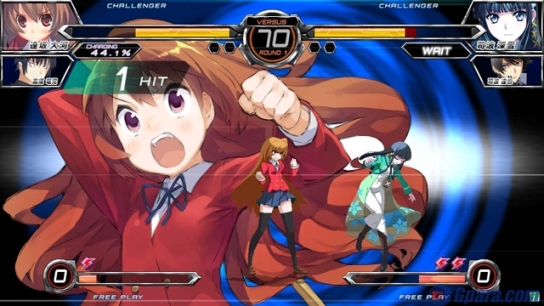 When I first found this at a game center, I was so surprised that I looked at it again.

I just didn’t expect that there would be such a fighting game...!

This is a game which all the characters from the anime published by a company, ‘Dengeki Bunko’ are in and it’s just so splendid!  If anybody is interested in it, please check it since the one family ver. will be sold this summer in Japan.

There are more originals of light novels!

★The Melancholy of Haruhi Suzumiya

I’m sure I did such a friendly explanation (not exposing too much) even to you guys who haven’t watched those anime!

It was so cool when I started writing this article, but now I’m so hot with the heat from the computer right now...

What am I gonna write about at next Saori Press...?

＜＜★Saori Press Vol.19★ A special article for the sports anime!!