Hello everyone! It’s Saori from Otaku Republic!
So you guys! Do you have supernatural power!?! No matter if you do or not! Here’s the Coupling Column that I’ll feature today!! 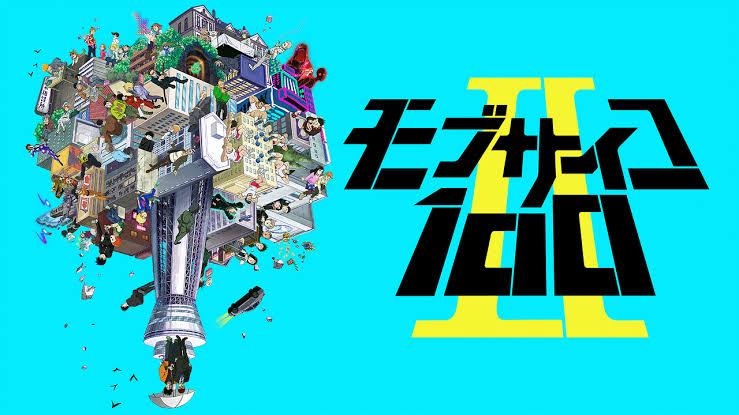 So for today’s Coupling Column! I’ll feature a gagged and moving Psycho Anime, Mob Psycho 100!
Now Season 2 of Anime is on air but they both are getting high rates with comments like ‘It was super awesome!’, so for those who are not familiar with it, check it out along with this Coupling Column!
Now, let’s get started!

The relationship of the two: A mental ‘master’ and an ‘apprentice’, a shy psychic and a good manipulator
Saori(゜∇ ゜)

What kind of Chara is Kageyama Shigeo? 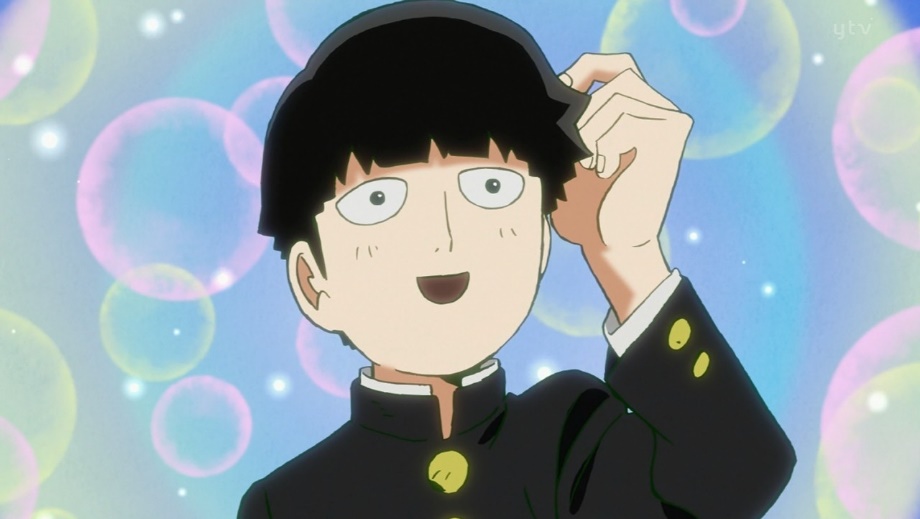 He is one of the main characters who is a real psychic, and a 2nd year junior high school student (8th grader).
When he was a little, he found out that he was a psychic, which made him shy and unable to get along with people. But he is actually very kind and polite so those who know him get along well with him. His name ‘茂夫(Shigeo)’ can also be read ‘モブ(Mob)’, which became his nickname. 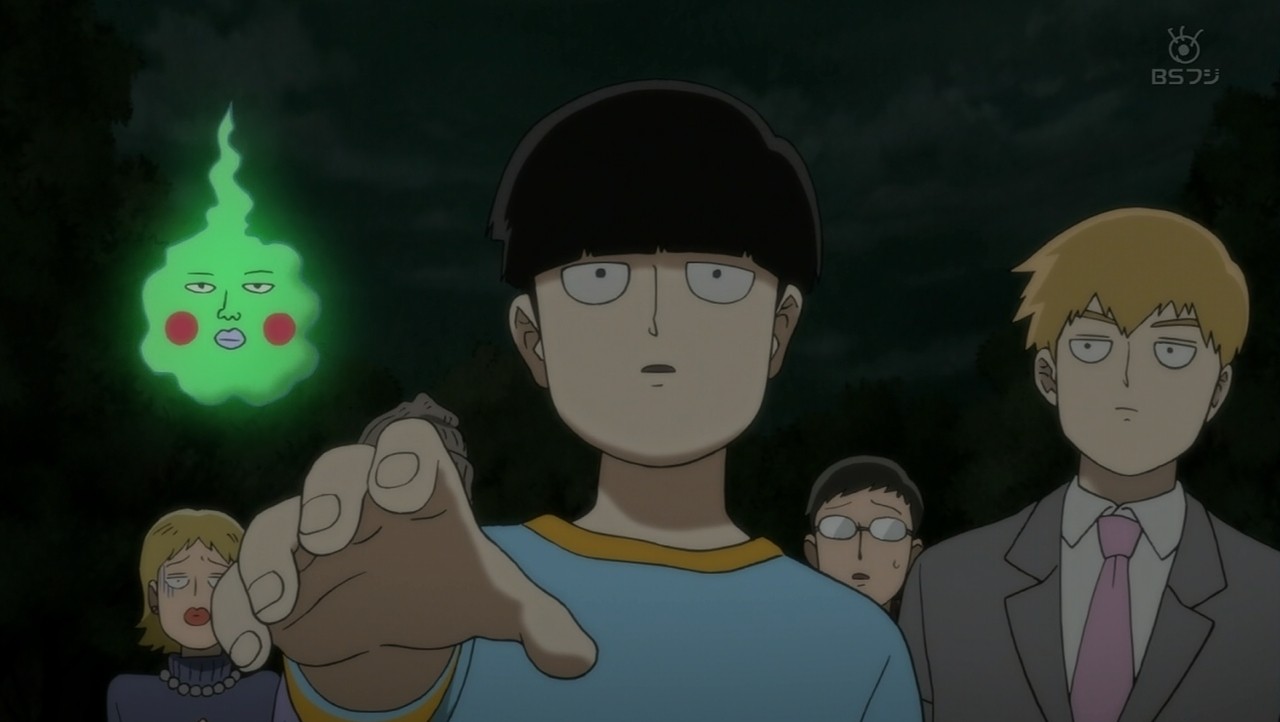 Mob is not only a psychic but also sees the ghosts. Since he is kind, he is able to understand both what humans say and the dead’s say.
He is sometimes worried about ‘how he can use his exorcism power’. Mob Psycho 100 is basically described in a gag taste but it can be very serious and moving since he is sometimes struggled with his mixed personality of being heartwarming and a powerful psychic…! 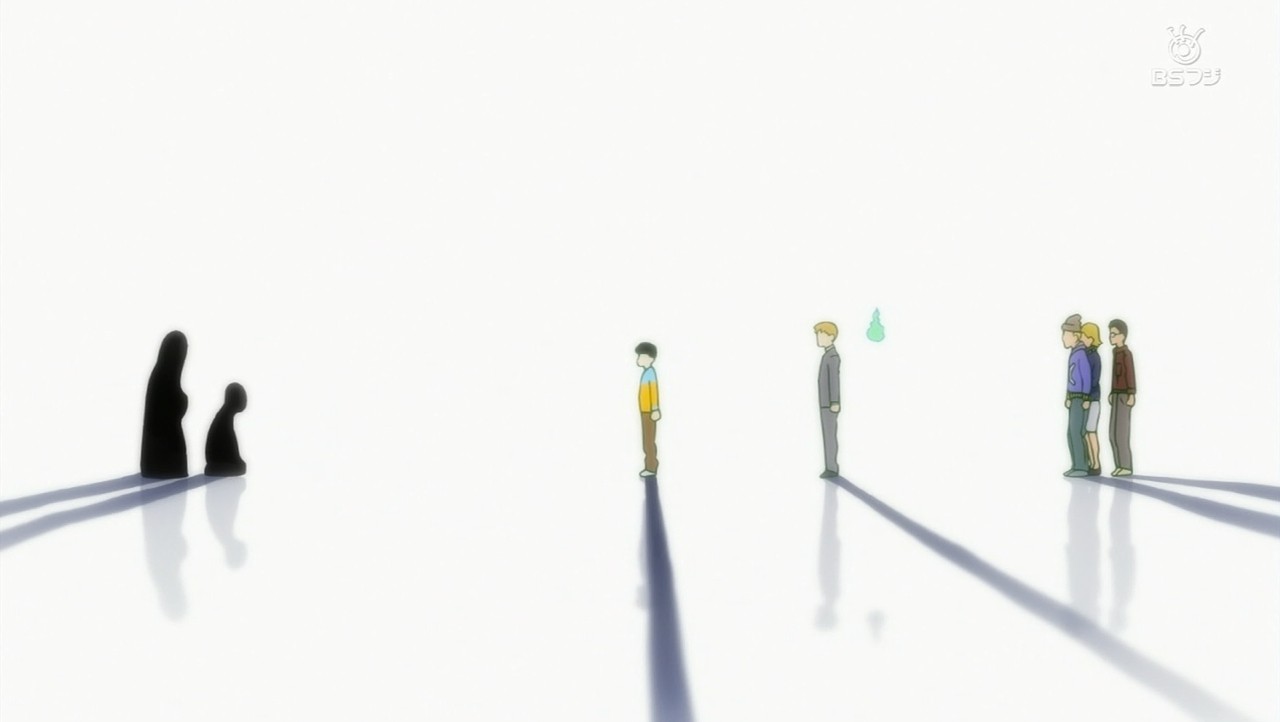 And how about Reigen Arataka?? 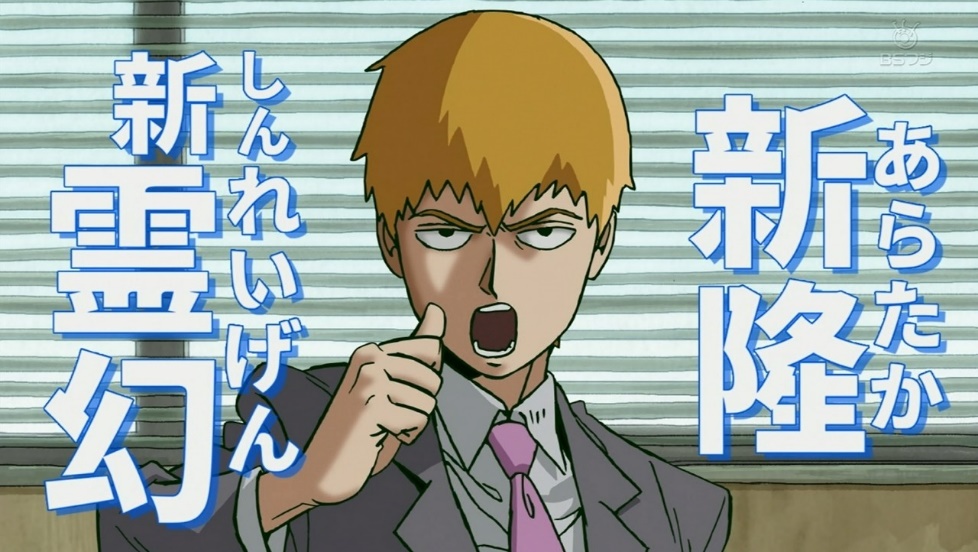 He is another main character and a real manipulator! He is not a psychic but he is able to solve all the problems that the clients brings.
He is a manipulator who is smart and works hard for people! His killer technique is Salt Splash! He splashes the salt when he tries to drive the evil spirit away, ends up being in vain! 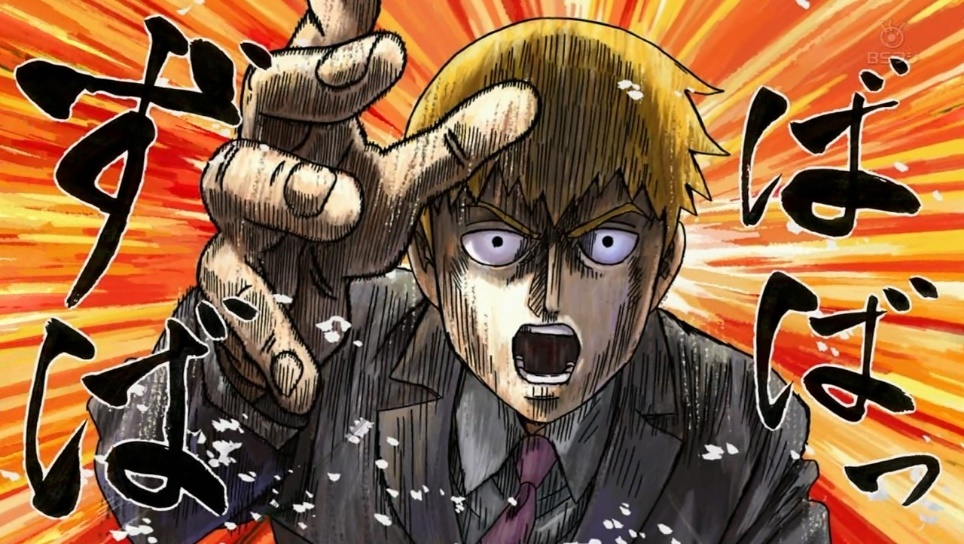 Even though he is a manipulator, the consultant fee is usually extremely cheap and when either client or he thinks it’s not worth it, then he never accepts the fee.
Also, every time he is asked to consult, he tries to solve it wholeheartedly, which made other Characters think he is a dependable person. Above all, the best part is that we can see how he solves client’s requests. 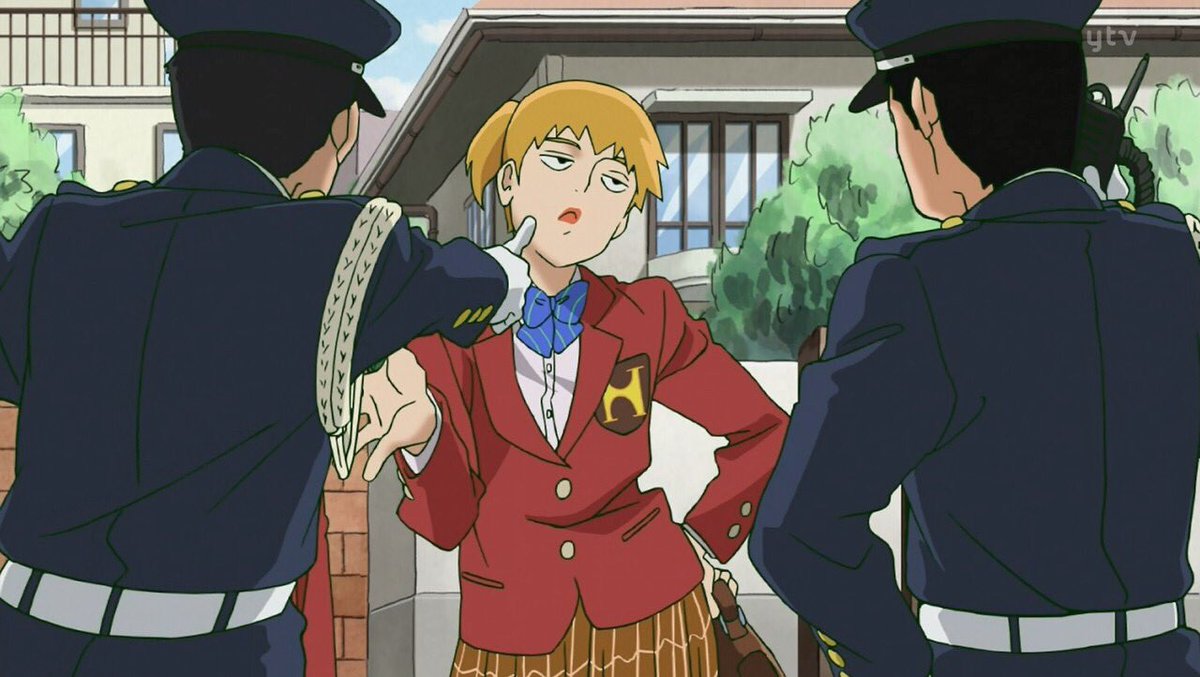 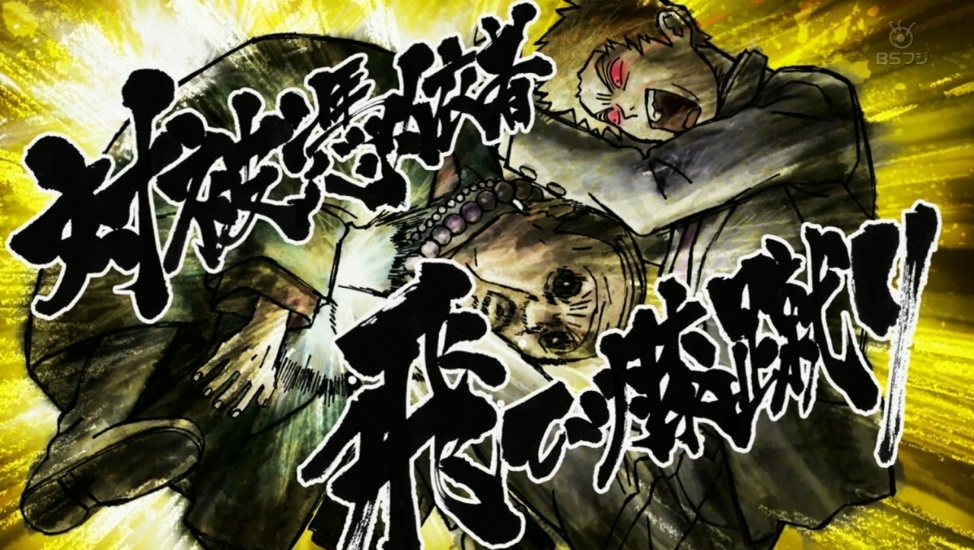 So! Then how did Mob and Reigen meet for the first time?
They met four years ago. Mob was then worried about how he can use his supernatural power. And he happened to see Reigen’s office, then he thought that Reigen might be a psychic just like him.
He visited him to consult about it. Of course Reigen wasn’t a psychic so he wouldn’t believe that Mob was a real psychic. But Reigen truly saw Mob, seriously worrying about it.
So Reigen advised him that being a psychic is one of his individuals such as being tall or running fast so cherish his individual. In other words, he told him to be ‘a good person’. 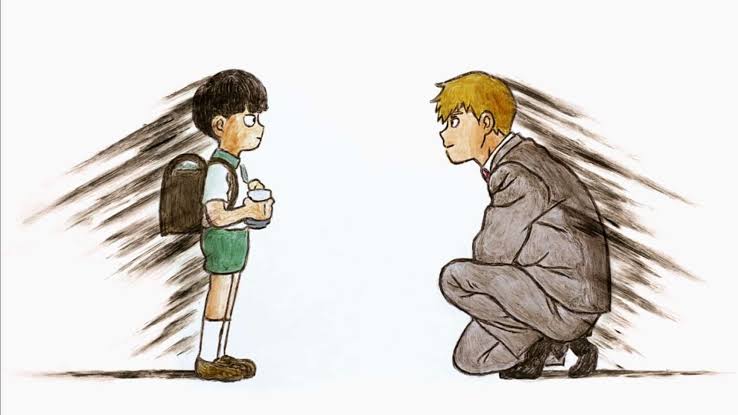 After that, Reigen found out that Mob was a real psychic and asked him to be an ‘assistant’ at his office and help him do the exorcism treatment.
Since then, Reigen has kindly solved Mob’s worries from time to time. He helps him not because he wants him to be a good ‘assistant’ but because he didn’t want him to take the wrong path in his life especially because he had a powerful supernatural power with a kind personality.
Reigen had his ‘parent-like’ thought for him. Mob, who accepted his thought, strongly trusts Reigen too. 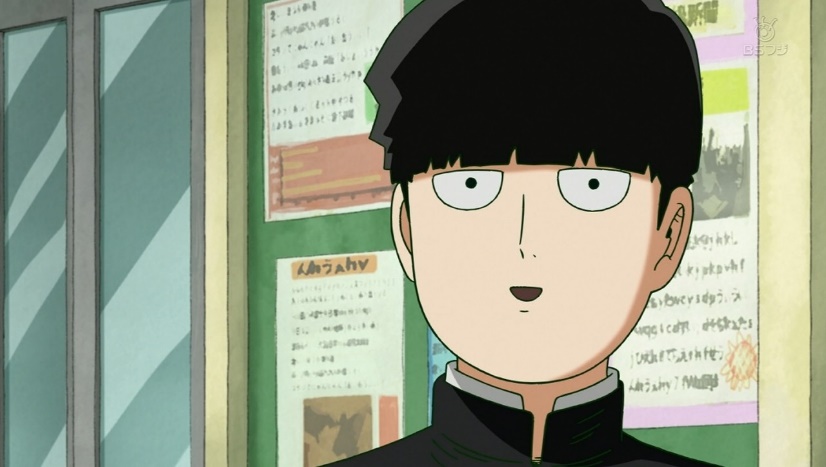 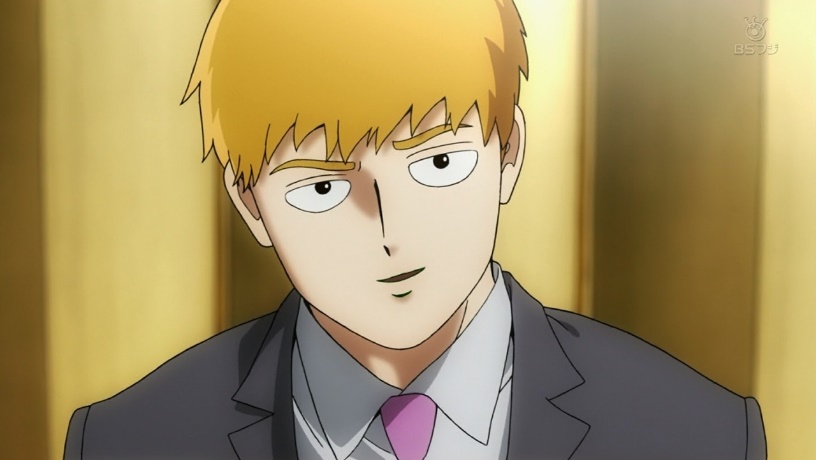 These two are the best main character combination! Especially in Episode 7 in Season 2, their relationship and what happened to them in the past are depicted, which is so moving…!
But again, I want you to watch not only this Episode but also all the Episodes from the Episode 1 in Season 1! 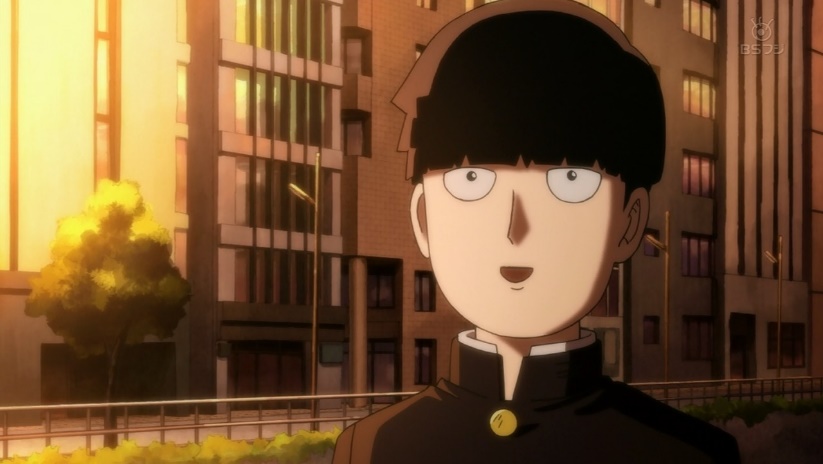 The relationship of the two: Guardians of Mob, who has totally opposite speculations
Saori(゜∇ ゜)

What kind of Chara is Ekubo? 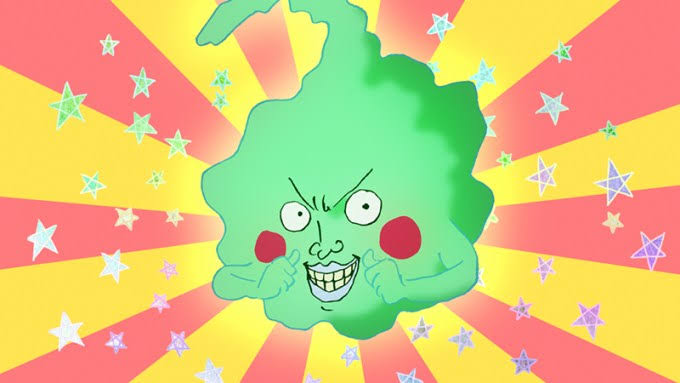 He is an ‘evil spirit’, who appeared in Season 1 (Anime) and is also eager to become an existence like the ‘God’, who will be worshiped by all humanity!
He has once put himself at a certain person’s mercy in the hopes of using the body to his advantage but Reigen and Mob almost exorcised it!
He was almost vanished but then he thought that he would be a God if he put himself at Mob’s mercy in the hopes of using him to his advantage. So he ended up not being vanished.
He is still trying to steal Mob’s body and use it to become a god, trying to get closer to him! 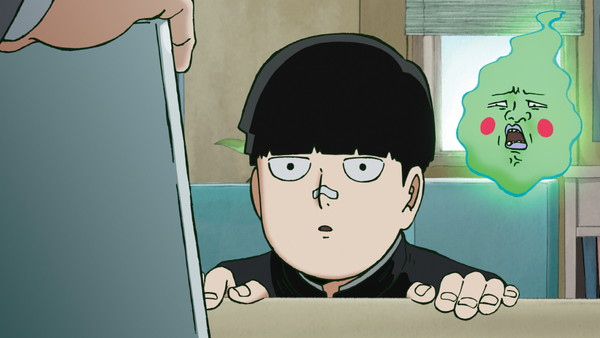 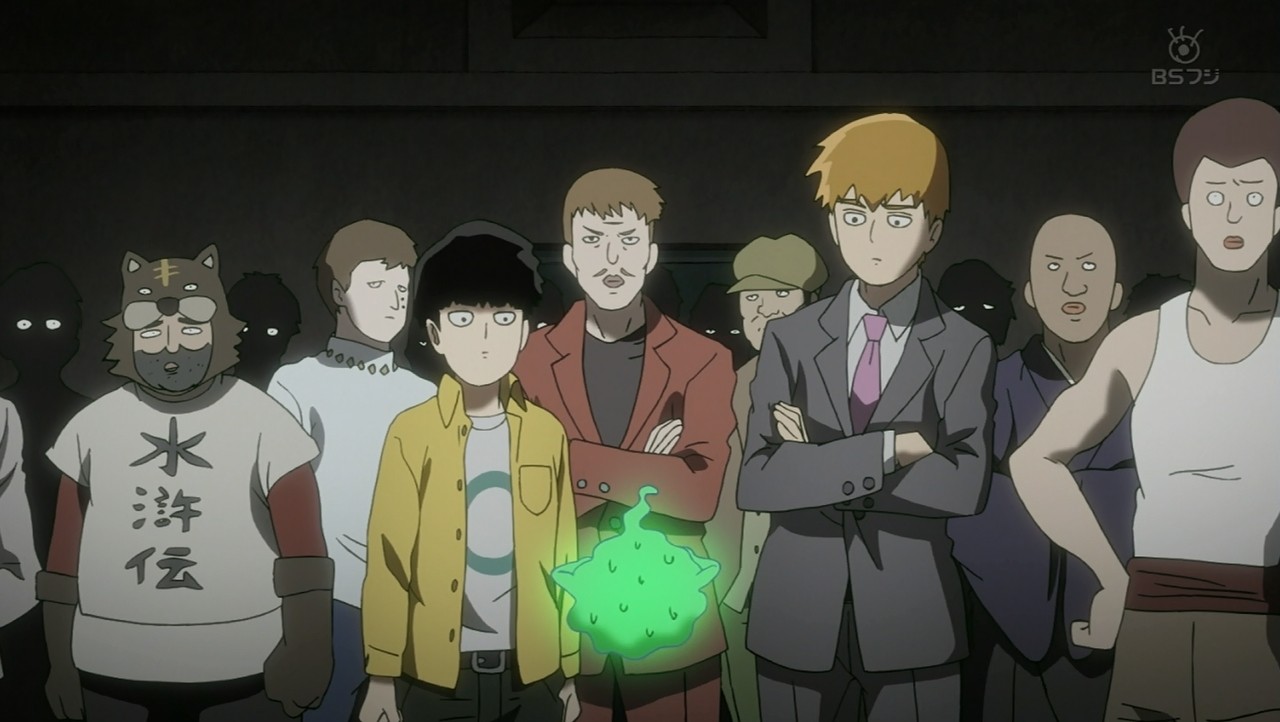 By the way, Reigen, who is not a psychic, has come to be able to see Ekubo due to one incident, so now they can talk to each other.
Even though they have different speculations, ‘they both cherish Mob’, so they don’t argue much. They’re more like comedian partners with a good tempo! 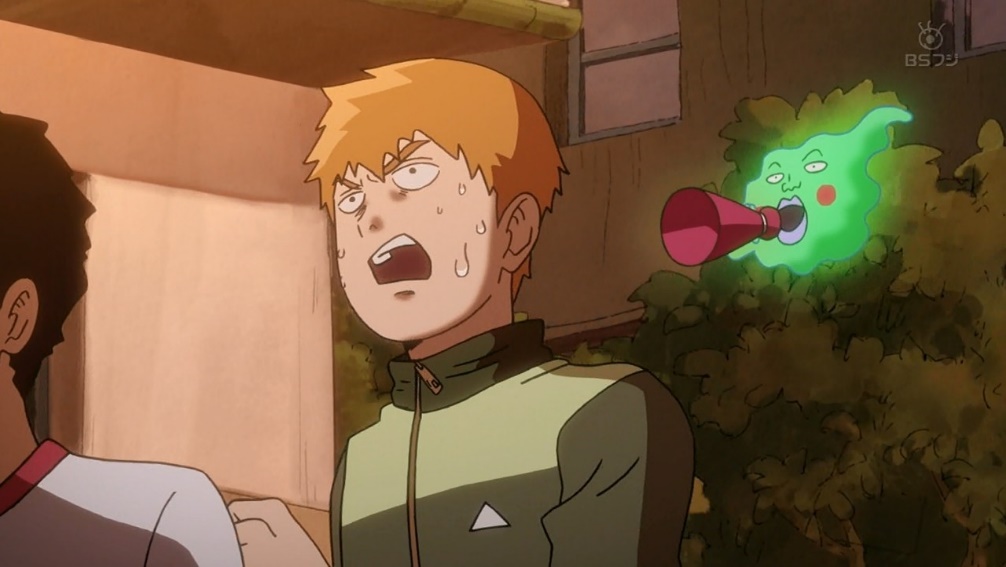 What kind of Chara is Kageyama Ritsu?

He is Mob’s younger brother in the first grade of junior high school (7th grader).
While Mob is shy and not able to get along with people, he is sociable, has good academic performance and good physical ability. Also, he looks cute and is very popular among girls.
However, he has a strong complex not being a psychic, unlike his brother. He still makes effort, though, by practicing bending a spoon by supernatural power. 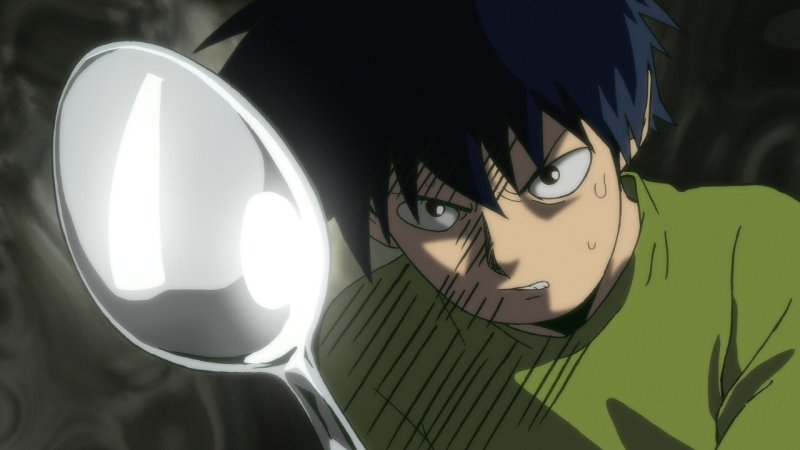 He respects Mob as his brother but is struggled with a fact that Mob has something that he doesn’t have. Ritsu Kun never dislikes Mob but wouldn’t be able to accept the fact, which will lead to one incident…. 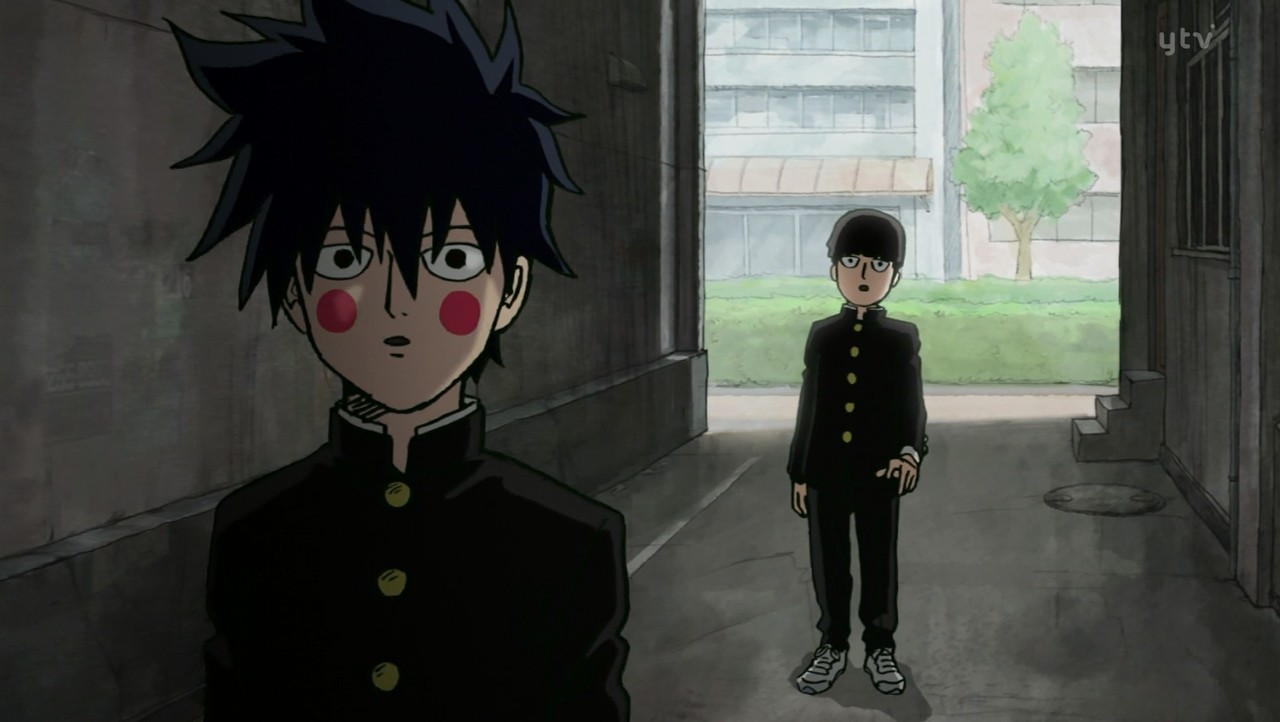 By the way, Mob purely loves Ritsu-Kun.
He thinks he is a precious family member. He is perfect at studying, doing sports and getting along with people. Mob also respects such a perfect brother.
Above all, he cherishes him. If Ritsu-Kun is violently attacked by someone, he really gets mad, showing all his emotions, which can’t be seen usually. 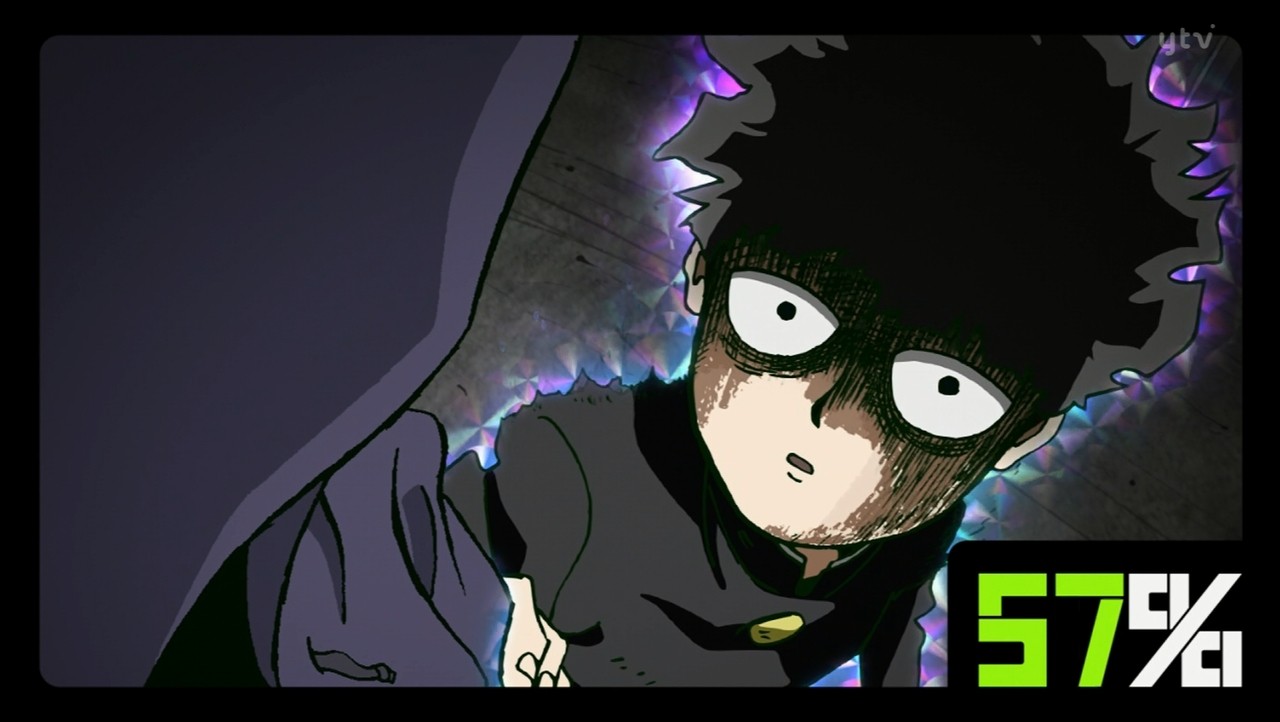 In Episode 8~12 of Season 1 (Anime), the story focuses on these two! The brothers who have total different personalities will appear in the storyline! Since it was depicted in the Final Episode of Season 1, it’s such a good story…! 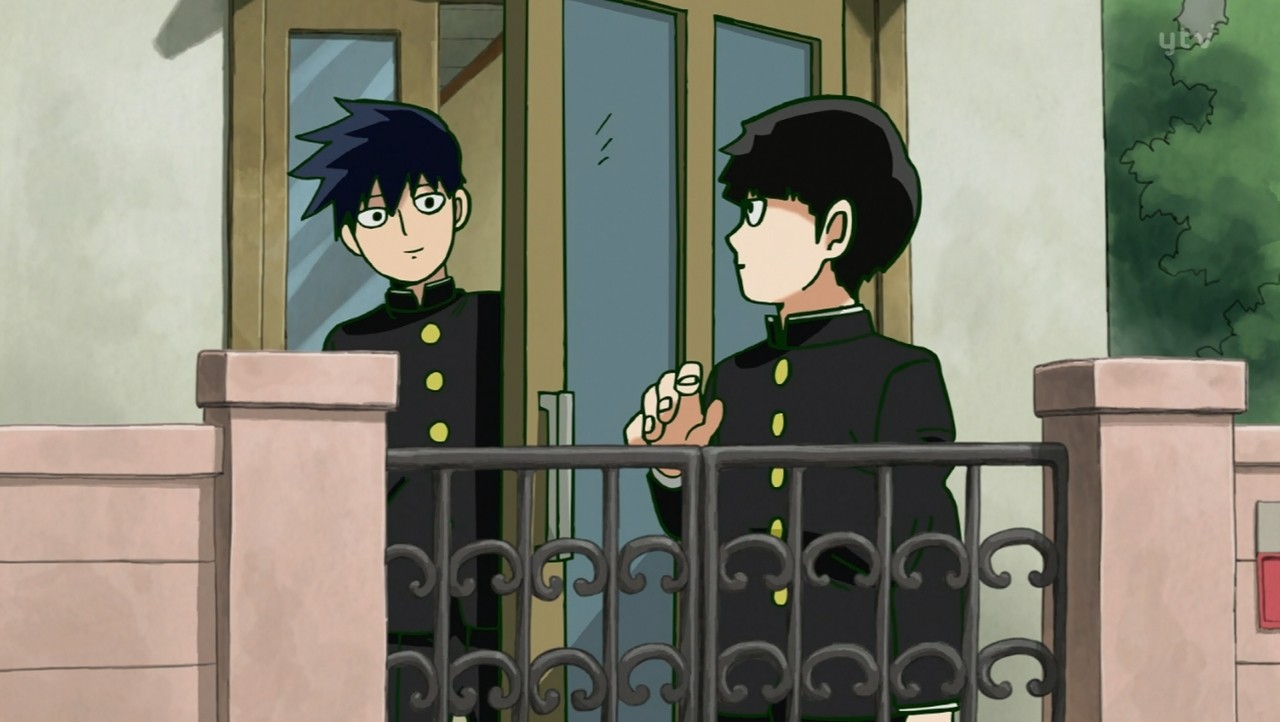 Season 1 has only 12 Episodes, and Season 2 has only 13 Episodes… I wish they had more Episodes…!
Mob Psycho 100 is full of interesting and lovely Episodes with attractive characters! Check it out!
Saori(゜∇ ゜)

Already now! I’ll see you at the next article! Bye now~!
Mob Psycho 100