★Saori Press Vol.19★Japanese autumn is the best season for sports! A special article for the sports anime!!

Speaking of autumn, it’s the season when we can eat delicious sweet potatoes, which is also my favorite! ヽ(=´▽`=)ﾉ

Here are some presents for you guys who always enjoy my articles from Saori! (σゝ∀・)σ

They’re bits of knowledge about ‘autumn’ so that you can be a Japanese Otaku just a little bit!

★Japanese autumn is a wonderful season for sports, eating, art, and reading books!

In Japan, we have various events taking place in autumn!

As you can see above, there are so many of them（◎д◎；）

I’ll introduce to you ‘sports and eating (harvest)’, out of the four pastimes in this article!

We Japanese too have various kinds of crops, such as vegetables and fruits in autumn!

Just like ‘Thanksgiving Day’ or ‘Halloween’, we also enjoy various fresh and delicious food in Japan!

October 10th is ‘the sports day (when we are encouraged to do some kind of sports)’, in commemoration of Tokyo Olympics held on October 10, 1964 in Japan!

The temperature gets cool down in autumn and we feel cooler than spring so autumn is said to be the best season for sports!

So, this time(=ﾟωﾟ)ﾉ!, I’ll introduce this genre of anime, sharing the Japanese habit!

Japanese autumn is the best season for sports!  A special article for the sports anime!!

I’ll introduce Haikyuu which has now being televised!  The story got over one of the peaks and will have another new stage!

(  'ω')っ 【Special Saori Press! The anime Saori wants to recommend to you!】

That was too much for the introduction.

Becauuuuse!  It’s worth it!  Haikyuu is such a wonderful anime!

I just want many people to know this anime as I can!

The story is realistic and persuasive, and has such passionate games!

Above all, all the characters are so attractive!

I’m sure you’ll have your favorite one, once you read it!

If you recommend it that enthusiastically then... do it!

Since this is my favorite too, make sure you make more opportunities to let others know.

We can finally hold the characters’ popularity vote ranking of Haikyuu!!  “Is Haikyuu!! that popular?”, “I have no idea what kind of anime it is....”

If anybody thinks this way, why don’t you watch Haikyuu!!, which Saori also recommends, checking this vote?! (*｀д´)σ=σ

This is the anime about Cycle sport, whose Season 1 was televised this spring and also Season 2 will be televised in October as the autumn anime!

The main character, Onoda Sakamichi-Kun is in the 10th grade of high school, who loves anime.

Since his junior high school didn’t have anime (research) club, he was going to join it when he entered high school but ended up having to give up, since the club couldn’t exist because of the lack of membersΣ(°д°lll)!

On the day when he gave up the club, he happened to know the sports called Cycling when he met the road racer, Imaizumi-Kun...!! 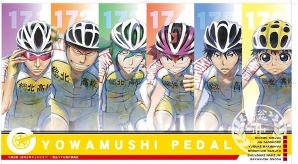 Since we rarely have the chance to learn it in elementary, junior and senior high school in Japan, I (Saori) was wondering what kind of sports it is... (゜Д゜) or assuming it might be close to the racing wheel (Keirin) (゜Д゜) at first.

The rule of this race in Yowamushi Pedal is not competing as individual time but competing as each school supporting each teammate and the school who gets the fastest time is a winner.

In each team, each teammate gets various roles when they ride on the given courses.

For example, when they climb up the steep hill, the one who weighs lightest and can resist the gravity most should be in the front of other teammates (called, ‘Climbing specialist), leading them. 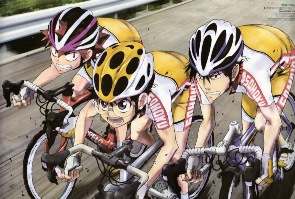 When they race the straight and long courses, the one who is able to keep a certain pace on the flat road (called, ‘Rouleur’) should lead other teammates. 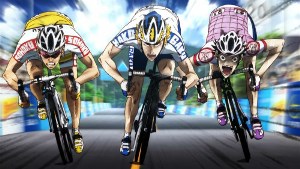 Also, when they race near the goal, the one who has high power, endurance, and stamina after running more than 200km (about 124 miles) should take the initiative. 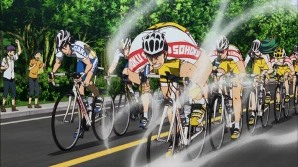 Each teammate has their very own characteristics and using them effectively will be the key for winning as a team, never wasting time!

Also, Yowamushi Pedal is on stage in Japan and all the fans enjoy it! (σゝ∀・)σ 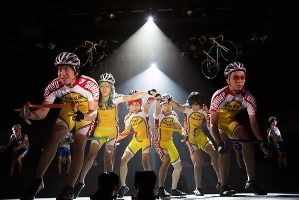 Speaking of the musicals of sports animes, the ‘Prince of Tennis’ is famous, isn’t it?

I’m just so curious that I might forget about working here!

The main character which has an incredibly strong physical ability emerged in a weak team, and they start beating strong teams aiming for the all Japan competition!

This kind of story stream is kind of the rule of right and also orthodox, isn’t it(。-`ω-)?

But, this anime, Diamond no Ace is a little different.

The main character, Sawamura Eijun has such a precious gift as a baseball player.

When he was a junior high school student, he got scouted as one of the players in the baseball club in high school, where there were many talented baseball players from all over Japan, known as ‘candidates of the Ace’!

In short, Sawamura-Kun joins the team, where many players (seniors or rivals) who can be the main characters are at already. 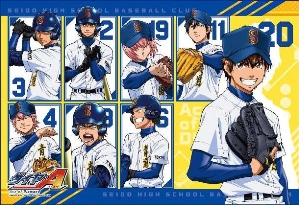 Of course, Sawamura-Kun is gifted as ‘Ace’ (like a diamond in the rough), but the same things can be true to other rivals who always deserve to be regular members.

Since he lives in the school dormitory, he sometimes has quarrels with his teammates, who are also his roommates.

Yes, they’re always rivals even when they compete with other high schools.

Someone answered like this when asked, “Which is the most charming scene in Diamond no Ace?”

“That’s a scene where they’re not playing the game.  I really feel sympathy about the psychological description of both players who are chosen and the ones who are not chosen.  There are so many scenes where they can’t get over with only their spirit or passion.  The scenes before they play the game are charming.” 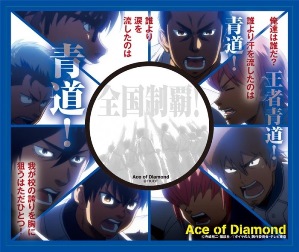 The best teammates can be the best rivals.

All the Diamonds in the rough are shining, aiming for winning at the competitions!

Wait a minute, guys!  Otaku Republic offers you guys the information of the latest anime and manga but we sometimes want to introduce some old and great anime too!

Slam Dunk is one of the traditional basketball manga which has deep-rooted fans even now and also used to be serialized in boys’ magazine, Jump! 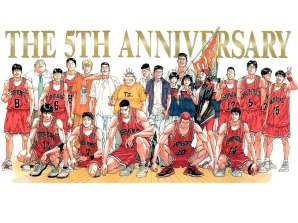 The one who is in the right, front row and has red hair is the main character, Sakuragi Hanamichi-Kun.

Unlike how he looks, I remember he always cared about his teammates and had a strong sense of duty.

When I was in kindergarten and elementary school, I used to watch the anime of Slam Dunk on TV, but...

I had a deep impression from the scene where big boys were trying to take the ball away from each other and running towards the goals with scary faces and screaming. 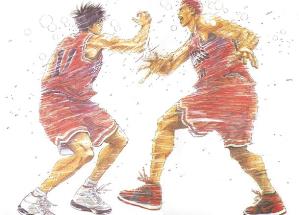 But, I think now that

they were that serious about the games and were able to understand how precious each score was that they made.

The super human-like players perform their own special skills.

This is one of the manga where the beginner of the basketball, Sakuragi-Kun tries so hard from the very beginning to get in the all Japan competition!

There are so many sayings which were born in this manga! 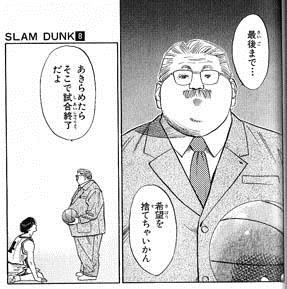 Don't give up... Keep hope till the very end.

When you give up, that's when the game is over. 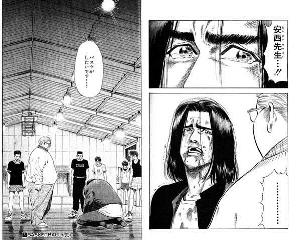 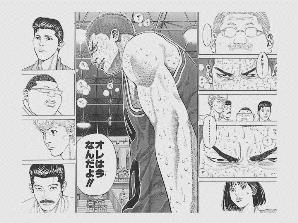 "Hey Coach, when were your years of glory… when you won the nationals?"

Although we can see this kind of manga whose material is normal ‘basketball’ nowadays, the writer of this manga used to say to people working at the editing department, ‘There is the possibility that this will not be a hit”.

‘There is an element of Love and Comedy.”

“They make a scene where they are at school.”

This has become a bible-like manga which is loved by many people, having those kinds of elements and making us have sympathy and having attractive characters who keep making efforts(・∀・)!

All the adults in Japan would pick this manga up when they had chance to remember their young age!

I’m sure that our boss must have tried so hard on practicing basketball, reading Slam Dunk!

And he must have practiced so hard having sour-sweet love and aiming for Inter-High!

(*｀д´)σ=σ Why don’t you guys read Slam Dunk ~ as its being said as the originator of basketball manga!

Other than sports manga above, we have more!

Well, why don’t you challenge some new sports during this autumn season?!

I’ll write a special article about Japanese autumn for the next Saori Press too! ٩(ˊᗜˋ*)و

Well then, see you next time!!