Well!  Some of you might have noticed already from the title above, but the theme of Saori Press this time is this!

(。-`ω-) Actually, I had been worrying about one thing.

Although I have been announcing, “Comiket!! Comiket is now open o(^O^*=*^O^)o!!” to many people in the recent Newsletters...

Maybe some of you might have wondered, “What’s Comiket?”....

o(｀ω´*)o That’s not good!  And I also know that you can’t say that question after such a long time!

Because it’s not exaggerated to say that Comiket is one of the traditional cultures in which  Japanese people are proud of!

For both who have already known and who haven’t, let’s review it by looking back at Comiket 86!

★The biggest Doujinshi Sales Event ever in Japan

Check all the numbers below out, first.

the number of the visitors at the regular Doujinshi Sales Event (usually held once in every three months) held in January 26(Sun), 2014 in COMIC CITY TOKYO 133 was 10,395.

In short, this inverted triangle building is packed with from 17 to 20 times more people than the ones who visit the regular Doujinshi Sales Event. 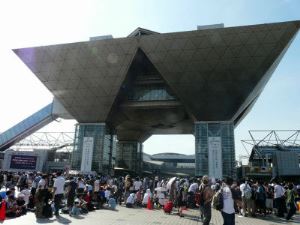 This is the picture taken above the building. 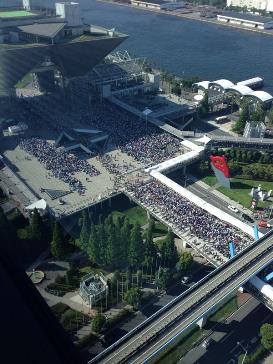 This is how visitors are gathering. 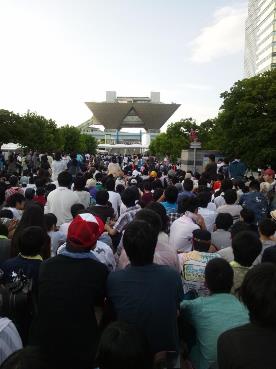 Here is more information with numbers.

The ratio of men and women who joined as circles and exhibits: Men 25% Women 75%

The ratio of men and women visitors is almost half and half, but mostly women, right? (●ω●;)

There were more women making lines when I visited there before, too.

And, the budget of shopping is a little less than I had expected!

Because, if regretted in Comiket, you’ll regret for your whole life!  You know? （＾ω＾）

There’ll be some items left, so we can get them later...  You’ll definitely lose right after you thought that way.

Our keyword in Comiket is ‘the Time is Now（＾ω＾）’ 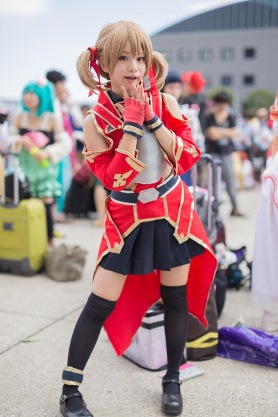 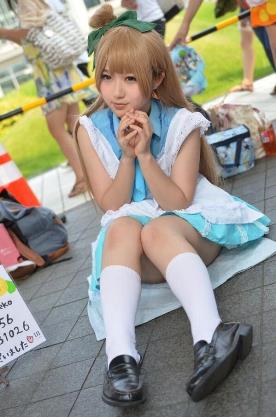 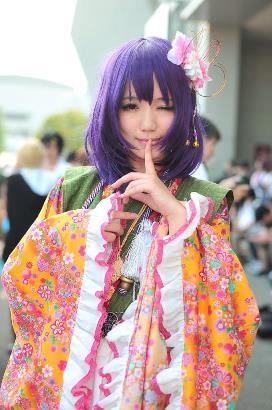 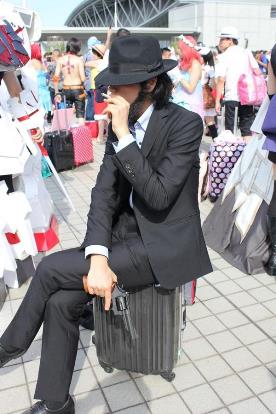 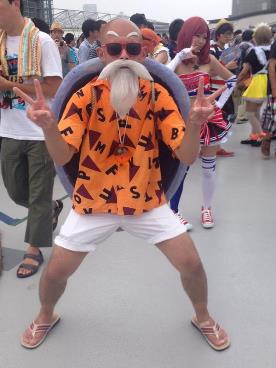 Ladies were so beautiful!  Gentlemen were so cool!

They were cosplaying as if they were just like anime characters.o(´∀`o三o´v`)o!!

But, there are not only cosplayers who are beautiful and cool in Comiket（＾ω＾）.

Some of them cosplayed so well using their full talent. 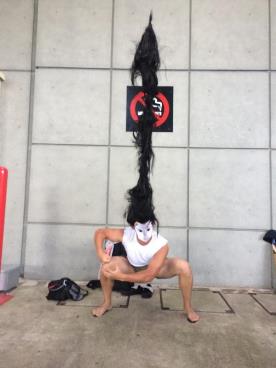 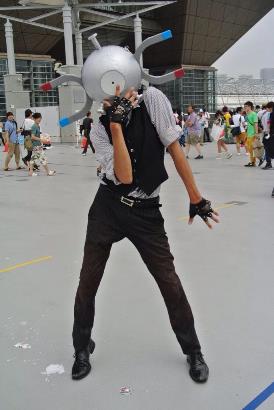 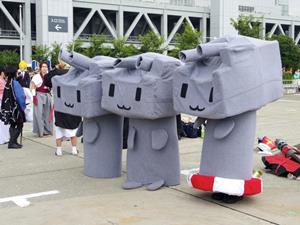 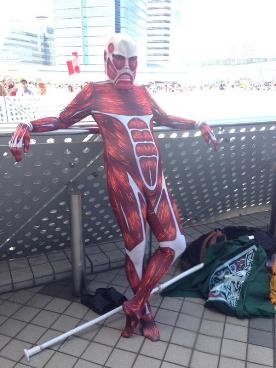 “I want to join the Japanese cosplay event but they are all Japanese and I just feel uneasy...”

If you guys think that way,

Just feel easy.  Everything you have can be weapons in Comiket. （＾ω＾）

I’ll show you guys two cosplayers who we thought were ‘the best’ among all the cosplayers taking part in the Comiket this time. 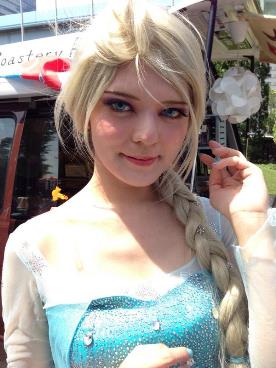 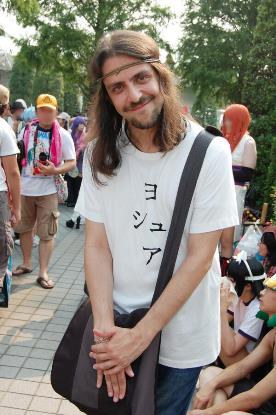 “Cosplaying can be beyond the border（＾ω＾）.”

★Since everybody is too enthusiastic, there will be various legends in there.

“There are no customers in Comiket.”

Like this saying, Comiket is the event that each and every participant creates all together as one.

As soon as the shutter is opened, there are some Kishida Meru.  (※) Those staff are threatening participants with Kishida Sensei’s costumes. 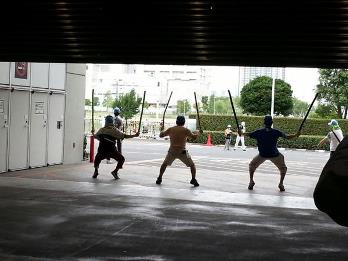 He is responsible for the character design of the Atelier Series 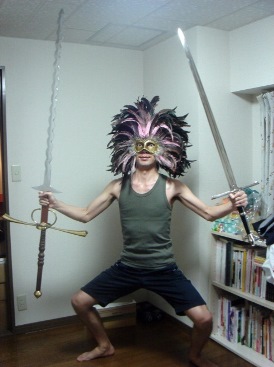 ※Kishida Meru Sensei is so happy to know that there are some participants who cosplayed his costumes on the Comiket’s day. 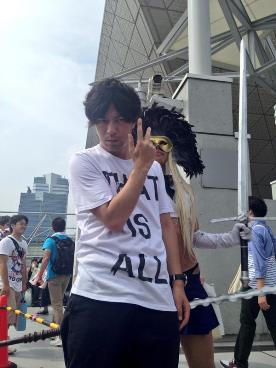 There can’t be zero legends（＾ω＾）

Especially the words that are said by the staff who guard and manage people or carry sick people, staying up late almost for three days of the whole event, have been getting attention every year as ‘Comiket Staff Quotations’.

● “Is there anyone who visited Comiket for the first time?  Oops, there are unexpectedly a lot.  Welcome to a den.”

● “If there is anybody who hasn’t bought a catalog, you guys can buy it in 20 seconds, which is faster than McDonald’s!!”

● “By the way, I couldn’t buy any Doujinshi, even one of them yesterday.”

● “There are some places which are on the different level.  It will take 30 minutes, where you are supposed to go in only five minutes.  There were some people who couldn’t make it and cried in a tiny interval.”

All the staff are trying hard to assist participants who are waiting on such hot days to being relaxed or to get more attention.  You guys are doing great!!!

Especially on the third day, the temperature was so low due to the rain at the previous day, so one of the said,

● “Today will be one of the historical days of Comiket, for sure!  It’s been a long time since we had this cool temperature in Comiket!  I just want to add the weather of last year and divide it with the one this year!”

If we got in a line, we get hot; and if it got windy, we got cold...  It seemed to be such extreme weather.

By the way, a famous person visited Comiket for the first time on the third day, which became a topic of conversation.

She is a big-name singer whom everybody knows of...! 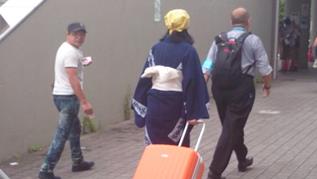 The line of the people became so long that it stuck out of the event place, wanting her items. 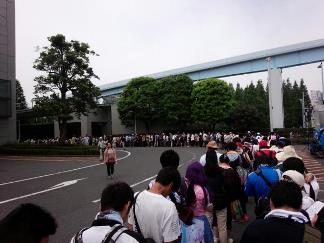 So many people were waiting in line, but only a few ended up getting any items from her...

Since it was the CD that a professional “enka” (like an American Bluegrass music) singer covered the song of VOCALOID, her original fans were gathering, which made the line the longest ever...

Her name is... Kobayashi Sachiko-San!! 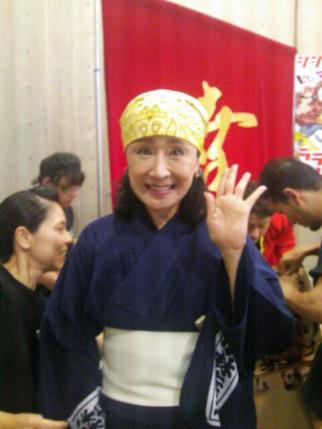 Hmmm? She has nothing to do with animes?  Maybe some of you guys thought so.

But nope!  She is the singer that has sung various anime songs with her 50 year singing career!

Especially, there are many of the songs that were adopted for anime and movies of Pokémon and I like ‘Kaze to Isshoni’ the best among them!!

This song is a theme song of the movie, ‘Pokémon: The First Movie: Mewtwo Strikes Back’, but this song always makes me cry remembering the movie. (´；ω；`)

She is such a wonderful singer.

You can see her pictures somehow, if you search for ‘last boss’ from Japanese google...

Like this, Comiket is a wonderful summer event which various people can enjoy in various ways.

Thank you for people who felt like joining in it after you read this report I made! （＾ω＾）

Once again, I’m gonna say good bye to you, remembering the saying by a Comiket staff!

● “Is there anybody who visited Comiket for the first time?  Oops, there are unexpectedly a lot.  Welcome to a den.”