Saori(゜∇ ゜) “So you guys… sometimes, you think you want to read an interesting Manga, don’t you?”

Saori(゜∇ ゜) “Then here’s what I want to recommend, Boss! It was such an awesome Manga that I have recently read. It’s Jujutsu Kaisen (Sorcery Fight), now serialized in Shonen Jump!!” 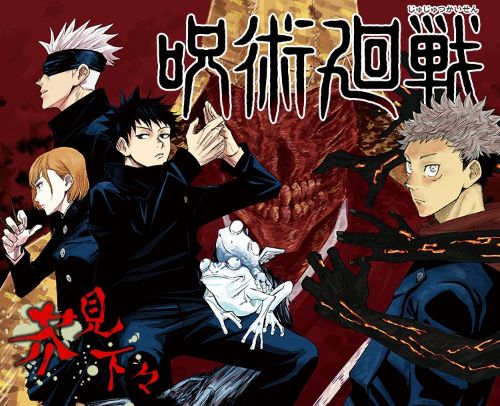 Saori(゜∇ ゜) “If I have to give you a very clear feedback, I would say it’s similar to the first version of BLEACH.” 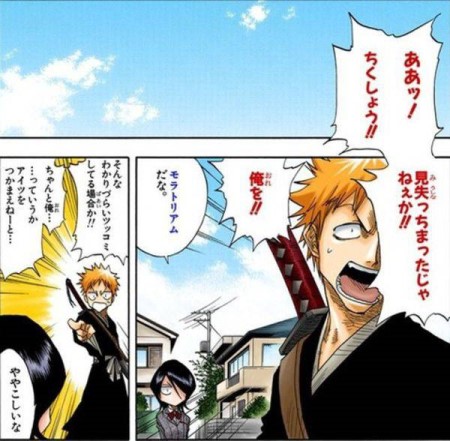 Saori(゜∇ ゜) “Of course it’s not anything like plagiarism or parody. There are so many ‘interesting’ elements in this Manga such as the main characters, battles and drama. It also keeps a good tempo because of them. Yes, I found out that this was such an awesome Manga…!!”

Saori’s Recommendation Point 1: The main character’s personality is not anything like “the recent typical ones” 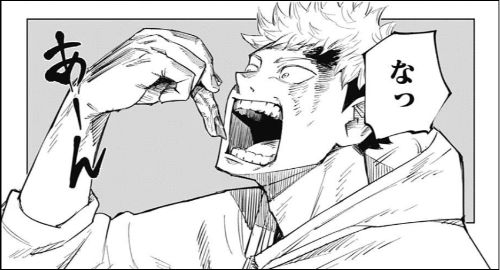 Saori(゜∇ ゜) “The main characters in recent Anime or light novels tend to be shy, I mean, too kind to control girls, don’t you think? But the main character in Jujitsu Kaisen, Itadori Yuuji, has such a frank personality with ‘open-hearted’. It doesn’t mean he’s selfish, though. He would never forgive someone who hurts people’s feeling and kindness due to their violence or unreasonable behaviors, which makes me feel refreshing while reading the story.” 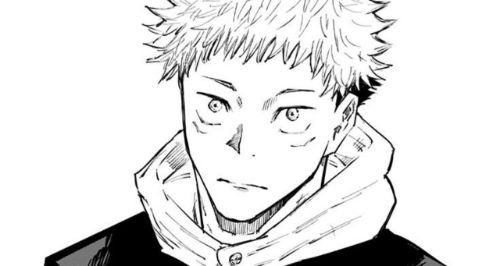 Boss(  'ω') “So.. what you mean is you never feel stressed from his behaviors?”

Saori(゜∇ ゜) “Yes! Of course, Yuuji-Kun faces various difficulties, being struggled with them. But he has an inner steel, where he never forgives evils and unreasonableness, or he is always there for someone in need. That’s why as the story goes, I come to like Yuuji-Kun even more. He is so nice that I feel comfortable seeing him. He is such a great character, I mean, the main character. I love him so much that I would want to make friends with him!” 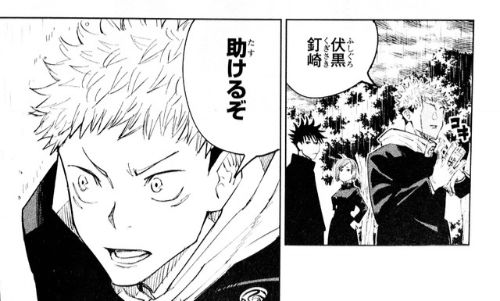 Saori’s Recommendation Point 2: It keeps a great tempo in the battle, a story and the worldview

Saori(゜∇ ゜) “Let me give you a rough explanation. The main character is one of the members of the ‘occult research club’, Itadori Yuuji-Kun. However, it doesn’t mean that he is into the occult. He joined the club because he can go home right after 5:00 pm every day.” 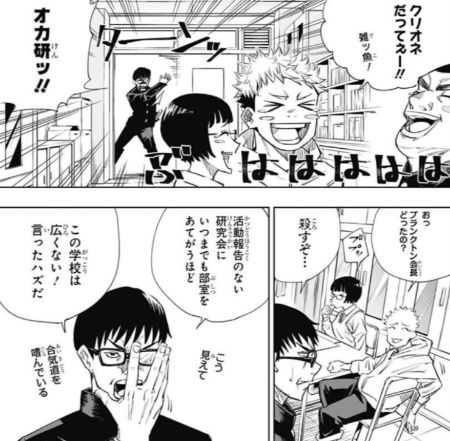 Saori(゜∇ ゜) “The reason why Yuuji-Kun wanted to go home at five… was because he wanted to visit his grandfather who was dying in sick at the hospital. One day, his grandfather said to him, ‘I know you’re strong, so save people. It doesn’t matter if you’re at loss or you’re not thanked by anybody. Just save them anyhow. Then die, surrounded by lots of people. Do not be like me’.” 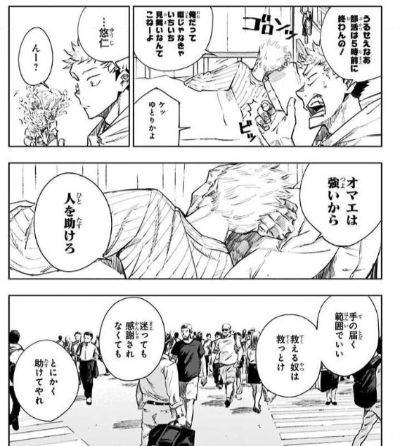 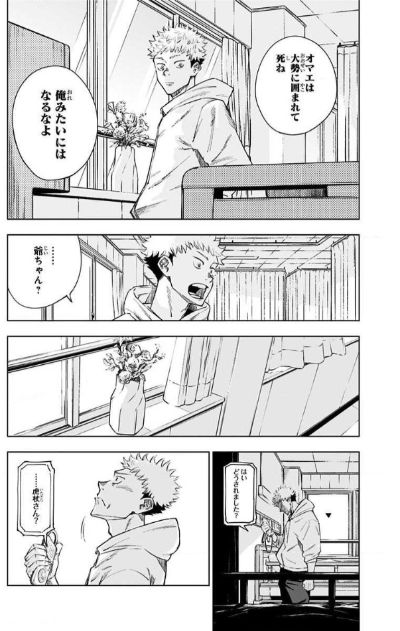 Saori(゜∇ ゜) “That was the last word from him. But before he could even mourn for him, one boy visited him at the hospital. He said that the mysterious object, which the members of the occult research club picked the other day, was a fetish, spreading the curse to people and it’s such a dangerous object, drawing even another ‘curse’.” 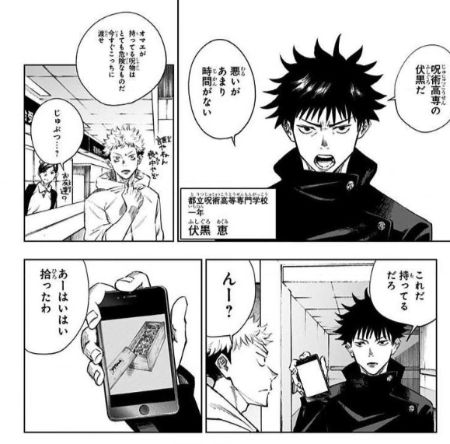 Saori(゜∇ ゜) “Of course, Yuuji-Kun said he could give it away to him since they just happened to find it but the problem was… the fetish was not in the hospital but at school. And what’s worse, other members of the occult research club opened the box. Inside was…” 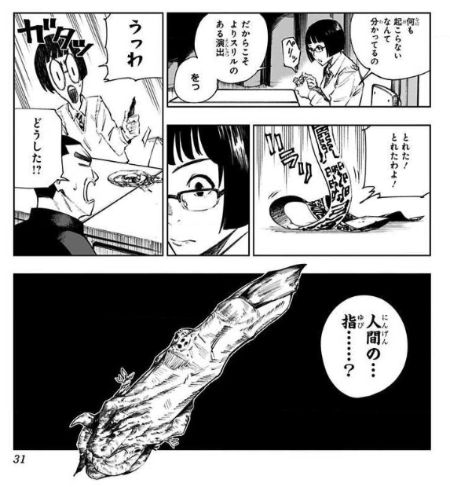 Saori(゜∇ ゜) “an object, just like a human’s finger…. Knowing that, the boy and Yuuji-Kun hurriedly headed for school. Because they saw more and more ‘curses’ spreading out because of that powerful ‘curse’…!” 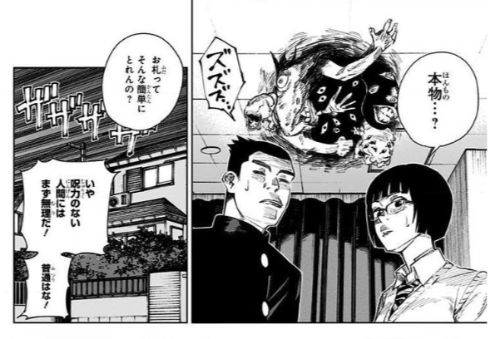 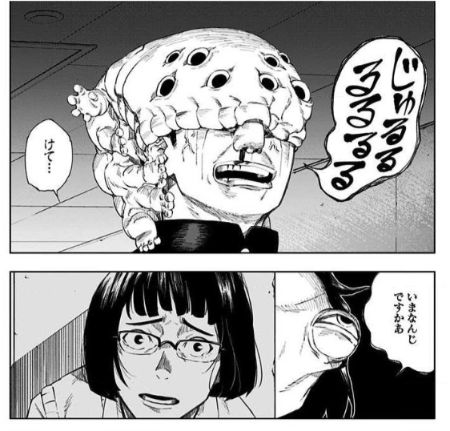 Saori(゜∇ ゜) “As more and more members of the occult research club were attacked, the boy released the ‘Shikigami’ (God). Yes… he… ,Fushiguro Megumi-Kun, was the ‘shaman’, who purifies such visible ‘curses’.” 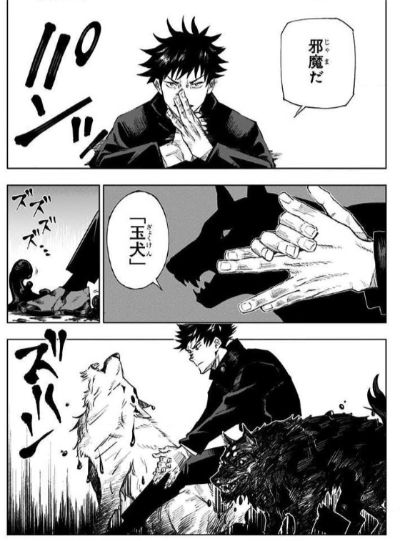 Saori(゜∇ ゜) “Yuuji-Kun was left out outside of the school. Being just the normal human, he couldn’t do anything against the curse… He was just scared of the sign of the ‘death’, gradually coming from the school. 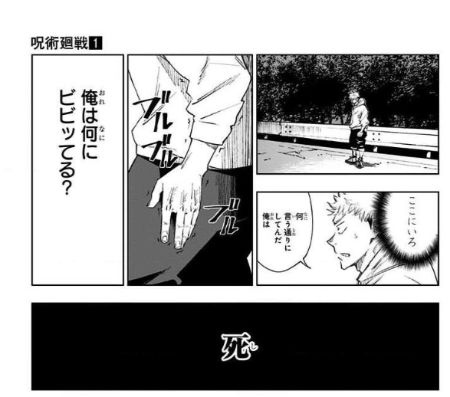 Saori(゜∇ ゜) “He did feel the sign of the death and was scared to die at the same time… He was wondering if his grandfather, who just passed away, felt the same way… But again, Yuuji-Kun doubted it. He knew he died calmly. Yuuji-Kun wondered what was the difference between his grandfather’s death and ‘the death’ he was feeling then, even though they were both the ‘death’…” 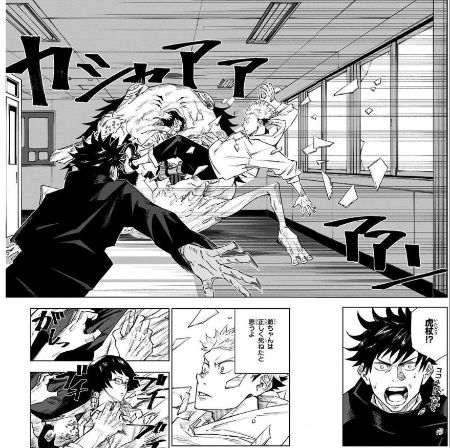 Saori(゜∇ ゜) “His grandfather was able to die in the right way. And the ‘death’ that the members of the occult research club will have, because of the curses, was not ‘right’. As Yuuji-Kun thought that way, he decided to fight against the ‘curse’, helping Megumi-Kun. 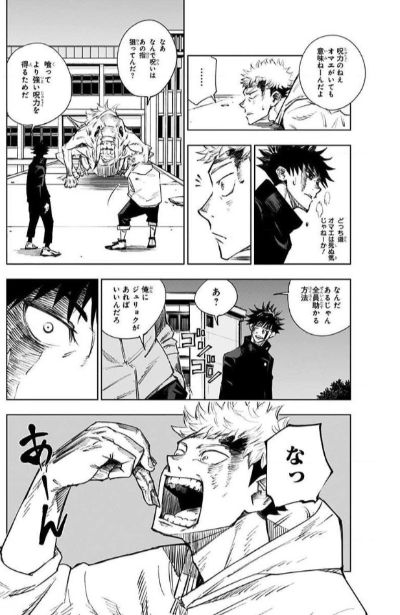 Saori(゜∇ ゜) “However, more and more ‘curses’ were coming along, being drawn by the finger of the curse. As Megumi-Kun told him that ‘the curse can’t be ruined without the curse (the shaman)’, Yuuji-Kun ate the finger so he could acquire the power to fight against the curse…!!” 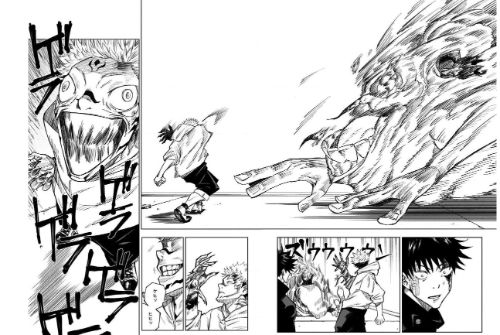 Saori(゜∇ ゜) “As a result… the worst curse called, ‘両面宿儺(Ryomen Sukuna)’, designated as a super dangerous curse, which invites a lot of curses ‘just’ by the finger, started to dwell in Yuuji-Kun. What Ryomen Sukuna, which was revived, did first was to slaughter. It grinned, thinking that it wanted to kill especially women, looking at the illumination of the town.” 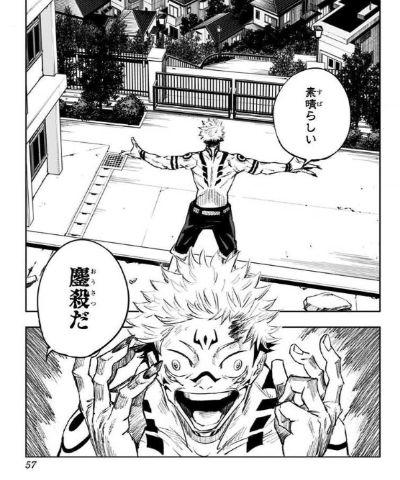 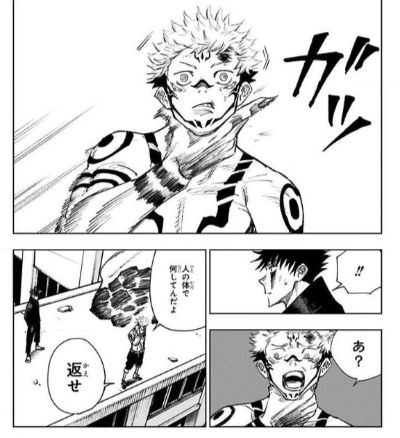 Saori(゜∇ ゜) “Guess what? Yuuji-Kun’s personality wasn’t gone. Megumi-Kun thought that it definitely had been gone. But Yuuji-Kun made it, holding down Ryomen Sukuna, saying ‘Stay away from the human’s bodies’…!” 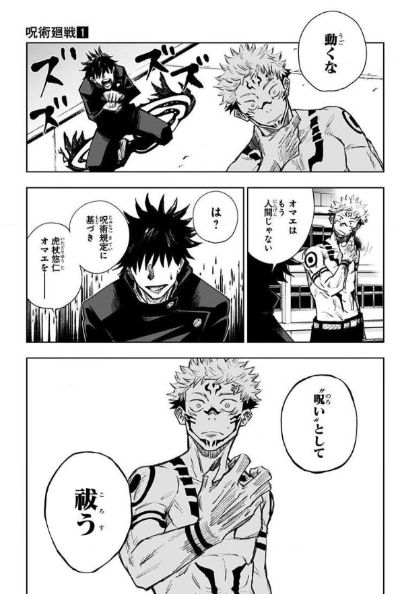 Saori(゜∇ ゜) “Yuuji-Kun finally got his personality back. Then Megumi had to tell him that Yuuji-Kun was no longer a human, and that Megumi-Kun ‘had to purify’ Yuuji-Kun, who got the curse, designated as a super dangerous ‘curse’.”

Saori(゜∇ ゜) “Exactly! That’s why I cannot keep an eye from what he’s gonna be like… He ends up being monitored by the organization ‘Tokyo Metropolitan Magic Technical College’, which trains and manages the shaman. And he gets two options there. Die right away or die after he gets all the 20 fingers of Ryomen Sukuna.” 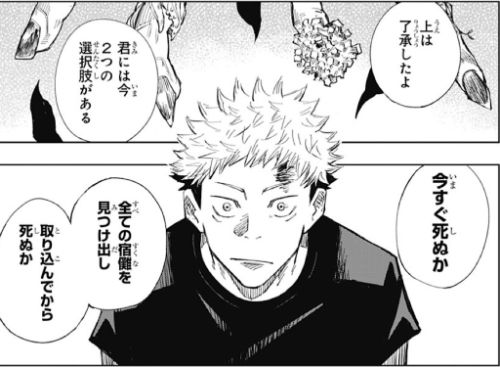 Saori(゜∇ ゜) “Yeah… But it is their kindness too. Gojou Satoru, who is the strongest member of the ‘Tokyo Metropolitan Magic Technical College’, got all the scattered 20 Ryomen Sukuna’s curses together and declared that they can now die them. Doing so, he was able to extend Yuuji-Kun’s death penalty.” 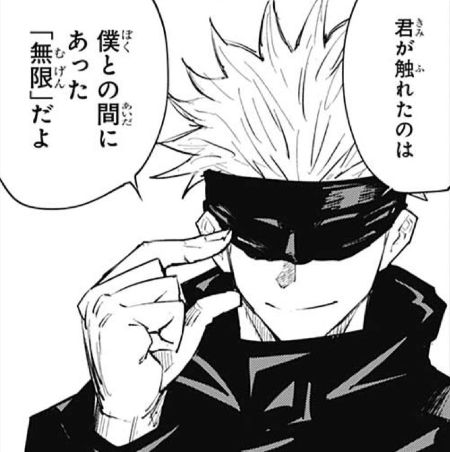 Saori(゜∇ ゜) “Yeah. He is the one who can resist Ryomen Sukuna, who hadn’t appeared for 1000 years. Gojou-Sensei said killing such a precious person would be too regrettable but… he promised to Yuuji-Kun that he would train him well so he can live as a ‘shaman’!”

Saori(゜∇ ゜) “Doing so, he will find scattered Ryomen Sukuna, facing various curses, with Megumi-Kun and a girl, Nobara-chan, who are also being trained by Gojou-Sensei…!”

Saori(゜∇ ゜) “Right! More and more enemies will appear and the battles will heat up too! I’m sure this is one of the titles in Shonen Jump, which will be made into Anime in the future! 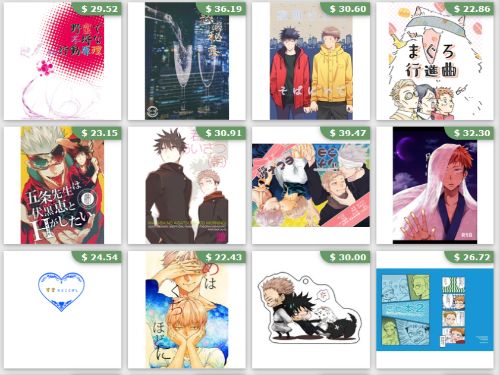 Saori(゜∇ ゜) “I’m telling you! It had been so long since I read such an interesting Manga! So check it out~!! Already now! We’ll see you at the next article!”