Splendid Japanese culture?  A special article for the Japanese anime!

It’s Saori who would answer, “DO GE ZA(sitting strait and bowing nicely), which is the Japanese way of apologizing when we really feel sorry for something. We don’t often see them doing it though, because Japanese people don’t like to stand out.”, if I was asked, “What is unique Japanese culture?”. 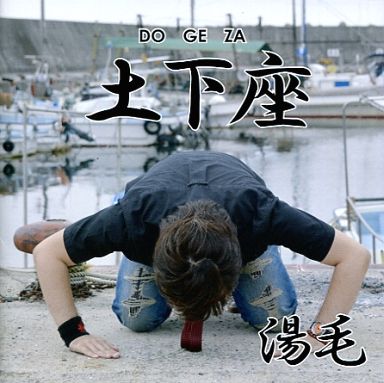 “What is unique Japanese culture?” Give me one simple answer!

Free water in the restaurant?

The theme of Saori Press this time is..., I’ll say it frankly, 【Japanese anime】!!

I’ll introduce anime and manga whose materials are about Japanese unique culture or history this time!

This is now being televised as one of the popular summer anime, 2014!

The material of this anime is about

【Shodo/ Japanese calligraphy / This is one of the Japanese cultures and people just enjoy it as a hobby, or practice hard for the competition, and there, they demonstrate how beautifully they can express their handwriting (Japanese words).  I(Saori) think people tend to focus more on the beauty of a whole form rather than the words themselves, so most of the time, the higher the level gets, the less normal people understand.】!

The main character is a calligrapher.  One day he hit somebody who castigated his work in the calligraphy contest.

He moves from the city to an isolated island surrounded by abundant nature and starts training himself, since his father told him that he lacks humanity before.

Though he was too proud of himself and fussy, his personality has changed, gradually communicating with islanders who are cheerful, frank and so kind. 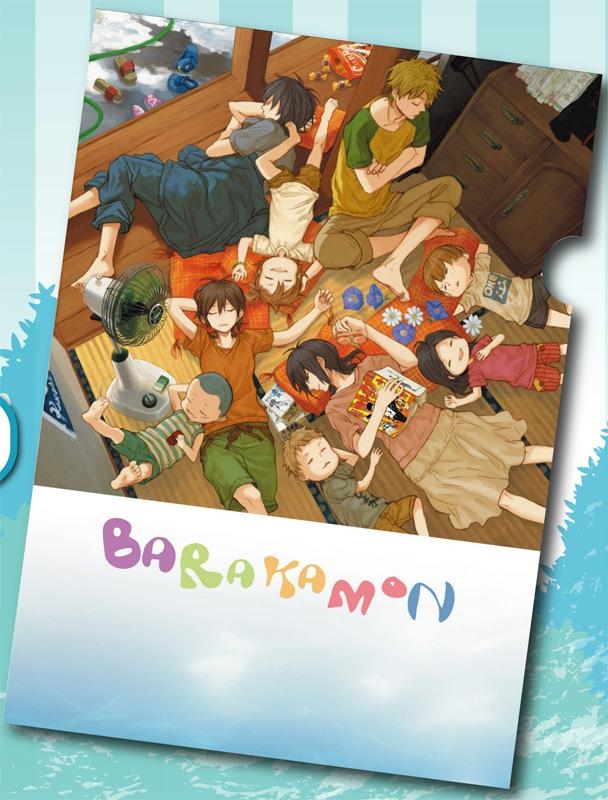 In Japan, it is often said, “Our handwriting can express what our personalities are like.”  Actually,

I’ve been said that I look diligent (because each letter looks hard) and stubborn since my handwriting is straight-line since I was a little.

Speaking of the main character of this story, his handwriting is so beautiful.

Though he is fussy superficially, he actually takes good care of people and is so kind.

But he’s having a hard time getting along with people since he has only dedicated to Shodo since he was little.

But that Shodo also gave him a chance to communicate with people.

Although the whole content is about gags, one of the viewers commented that it should be televised at daytime or in the evening so that everybody can watch it instead of showing it at midnight.

It’s not too late to catch up with it, so why don’t you start watching it?

Especially, anybody who wants to know more about Shodo!

By the way, here’s what we did to make sure whose handwriting is the most beautiful in Otaku Republic... 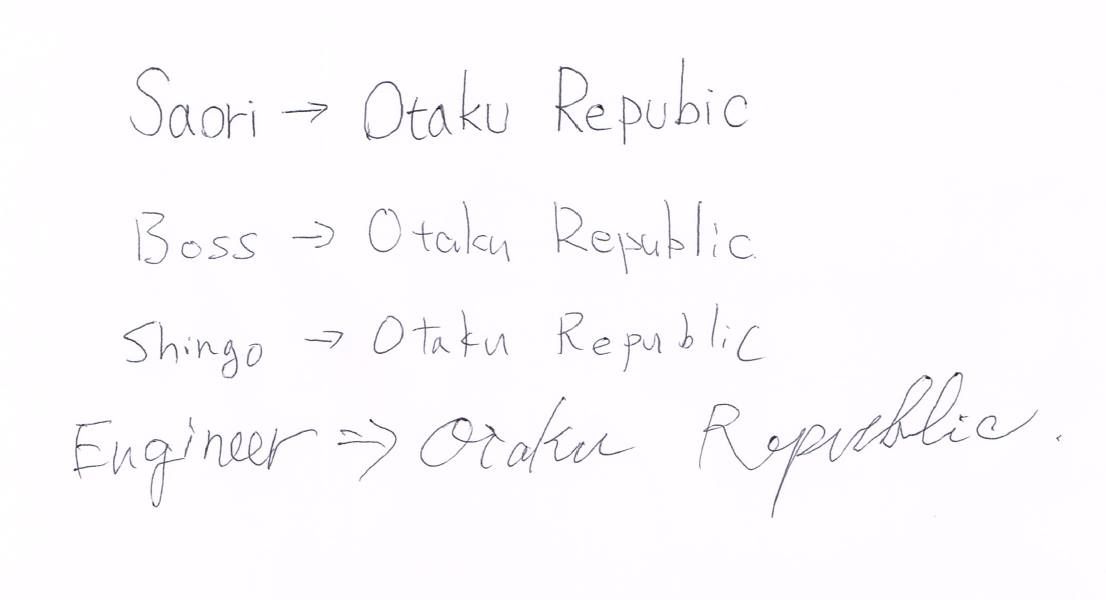 Yes, that’s me!  They are also showing how good my personality is!

Ninjya… it’s a miracle’s existence which used to be here in Japan.

Speaking of the famous anime whose material is about Ninjya, we can pick up NARUTO at first!

【Ninjya / They are like Japanese version of spy who assassinates famous people or collects information from all over the world.  They have high physical abilities and are genius so that they can complete any kind of missions, developing various tools.  By the way, some Ninjya still exist in Japan.  But nobody notices that they’re Ninjya since they don’t show anybody their true colors when they’re on duty.  Saori might be a Ninjya. 】 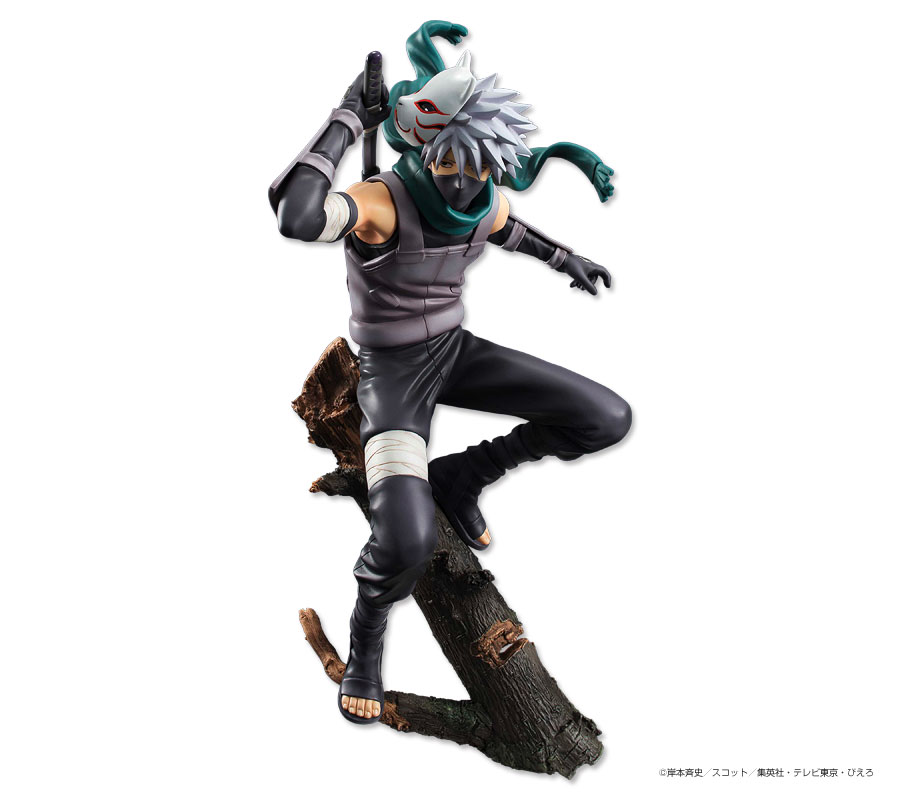 Now it’s in the middle of the final fighting since NARUTO started to be serialized 15 years ago!

All the masterminds from each incident are revealed and Naruto and his buddies are fighting toward their enemies as the last union.

My favorite episode is the one about the past of Naruto’s parents ~ but I can’t tell you any more detail.

If you read the final episode after you read this episode, you’ll be so moved…!!( *´艸｀)

I can’t say more but it’s so moving!

And I love the song ‘Wind’ which was used as ED for the first time among all the songs in NARUTO.

It’s a song which makes us painful as if it expresses his loneliness.

This is one of the skills Naruto is good at!  How am I gonna use it?

Of course while I’m working at Otaku Republic, I want the other half of myself to work on raising the level of the characters in the game, ‘Persona Q: Shadow of the Labyrinth’, which I’ve been playing right now!

The level won’t go up even though it’s about at the end already(ﾟ∀ﾟ)!

Since I want to take care of the scenario, I’ll never let the other half do it though!!

【Samurai / This deprives from the name of the position which used to serve for historically important people.  Now we have the image of ‘being clean, having a keen sense of duty and being blue.  We also have the image of wanting to Seppuku/Harakiri(killing themselves cutting their heart with a sword).  Although this is nothing to do with anime, I really want to recommend a great movie called ‘Last Samurai’, whose main actor was Tom Cruise.】 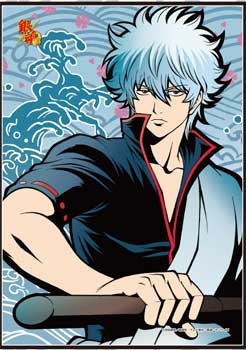 I’ve introduced two anime seriously so far, but now, I’ll introduce the one called ‘Gintama’, being relaxed this time! （＾ω＾）

On the contrary of the image of cool and serious Samurai, this is ‘quite the extreme gagged anime’!!

●Though the time setting is in the Edo era, an alien appears. (This anime is SF humane comedy.)

●The main character is always languid and he tries to deal with things irresponsibly when nobody’s watching him.

●When Gintama’s staff made a ‘parody of a certain anime’ in the original, the company of the parody complained about it since the staff made it so extreme.  (Episode 232 was actually prohibited to televise.)

Maybe you think this anime is just so jolly from what I wrote, but actually, this is the one which got the spirit from ‘Samurai’ for sure.

Even though the main character is always languid and selfish, he never ignores anything if somebody is really in need!!

I don’t think he is a clean-minded man, in fact, he has a keen sense of duty, just like Samurai...!!

Although this is such an extreme gagged anime, the main character is so cool when we see the serious episode, which is so rare!

I hope there will be an animated version(ﾟ∀ﾟ)。

By the way, my little brother has all the episodes of Gintama, so I can read it whenever I want to!

Since each story completes to the end in each episode, it’s so easy for you to enjoy reading it, being relaxed!

And now, I was going to introduce the Japanese anime,

‘BLEACH’ which has a special atmosphere( ･∀･)...,

If I wanted to introduce NARUTO, Gintama and BLEACH, the title should have been ‘a special article about “Shonen jump”’  So, I just couldn‘t make it happen(ﾟ∀ﾟ)。

I mean, what I want to introduce is the one whose material is ‘Japanese unique culture’!

I really want to write about “Shonen jump” someday too…ヽ(´Д｀;≡;´Д｀)ﾉ！

Oops, the point is going the wrong way, Saori! ヾ(･ω･´;)ﾉ

We actually have so many more wonderful Japanese anime besides the ones in “Shonen jump”!

Hmmm! Colorful and beautiful! (*>ω<) Yes, this is Japanese!

What would you imagine if you were asked about ‘Japanese anime’?

Oh well, about the next Saori Press....

＜＜ ★Saori Press Vol.13★ Is summer in Japan scary?! A special article for the horror games!!