※Please note that this article includes some spoilers about the characters in My Hero Academia.

Boss(  'ω') “Oh? Speaking of My Hero Academia, it’s a blockbuster, depicting a staple genre of ‘school and hero’, where a boy who doesn’t have 【Quirks(Superpower)】by nature struggles, trying to become the Hero in the Hero training school, while 80% of people in that era have such Quirks…” 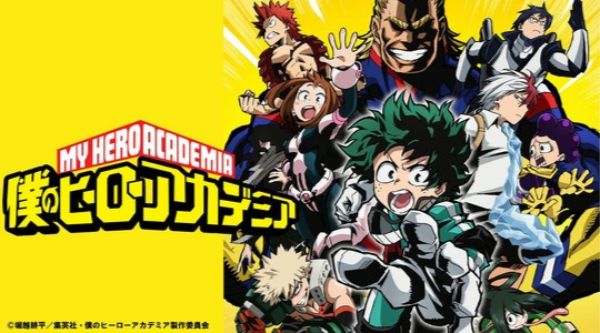 Saori(゜∇ ゜) “Yes, that’s why I’m telling you! Not only boys and girls who aim to become the Hero but there are also attractive and unique old farts, which makes the youngsters brilliant…!!” 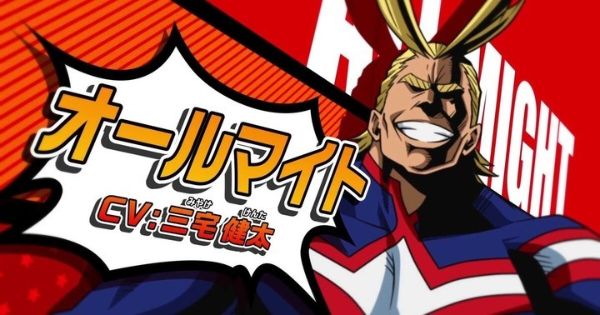 Saori(゜∇ ゜) “As we all know, he’s a MUST character in My Hero Academia! Yes, he is the old fart who started this story!!”

Boss(  'ω') “I think he’s just as attractive as boys and girls who are aiming to become the Hero. Being strong and kind, he’s the one who teaches the main character, Deku, what the【Hero】really is. He’s literally the Hero with strong superpower and positive personality!” 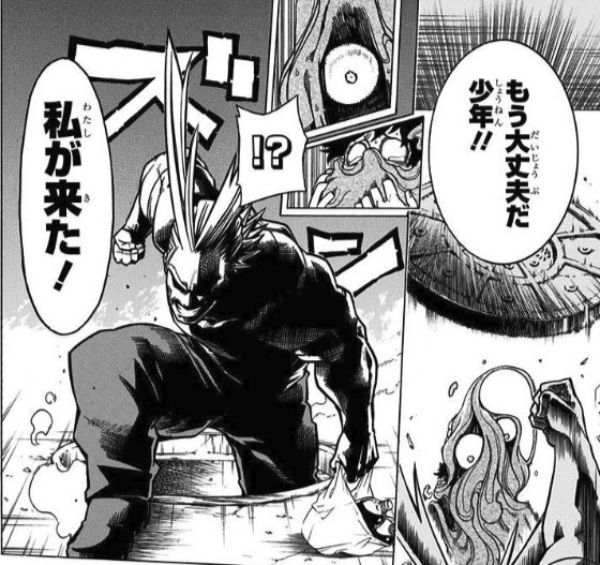 Saori(゜∇ ゜) “Right!! All Might is super attractive but he can also be said the most【Hero-like】Chara among all the Chara, I think!! Why? Because he’s【perfect】as the Hero but is【not】as a Chara.” 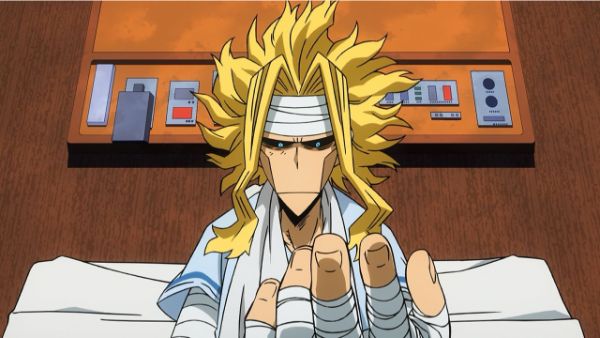 Saori(゜∇ ゜) “While holding such a powerful Quirk, All Might is a Chara, who always has a dilemma in his life as the leader and a human. His behavior sometimes reminds us of something important. He teaches us that the Hero doesn’t always repel the villains but they also have to live as a human-being.

Especially, we see the scenes, where he’s having a difficulty telling Deku, who follows him as the Hero, the truth and tough reality… While being strong repelling the villains, he’s not strong when it comes to telling Deku the cruel truth…. which makes me think that he is still an immature humane Hero. I love that side of his.” 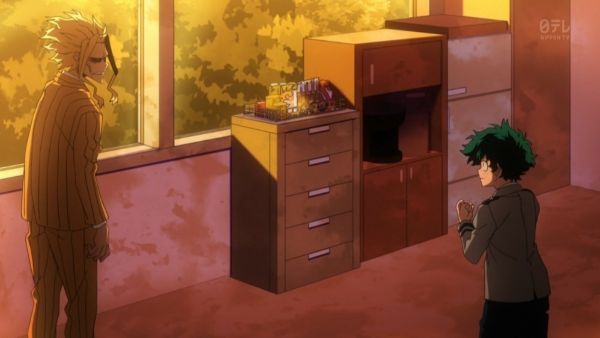 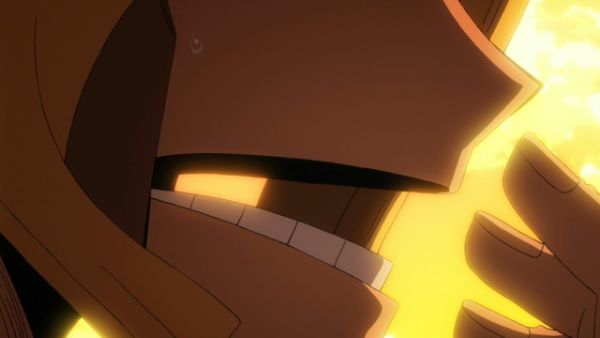 Boss(  'ω') “He’s the most Hero-like Chara because he’s not perfect, huh? In the movie, it shows us the original story about his past. Plus, the original hasn’t shown us all his secret yet. That means he’s still a HOT and attractive Chara, huh? Can’t wait to see how he is going to be!” 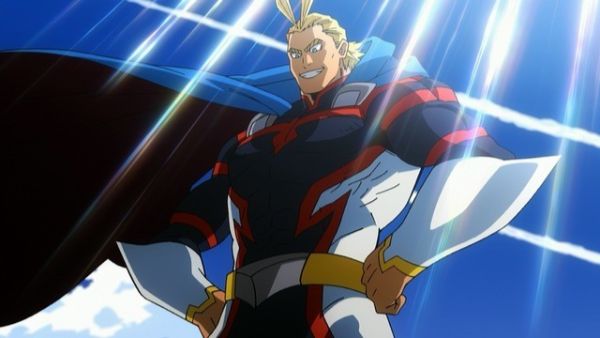 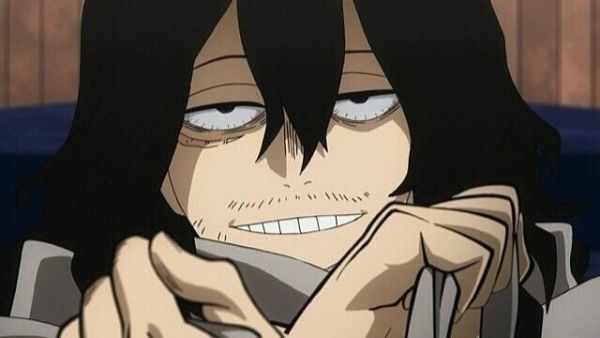 Saori(゜∇ ゜) “Yeah! We have to pick out this old fart, who has a very different attraction from All Might! Aizawa Shouta, I mean, Eraser Head!! He’s one of the charming old farts in My Hero Academia too!”

Boss(  'ω') “We always see this kind of Chara, who can【erase the superpower】in the【superpower】genre of Manga, huh? Since he seems the rival of all the Chara who appear, he clearly has a different power from All Might.”

He covers that weakness by implementing short-period and hand-to-hand battles. Plus, he is able to analyze the enemies’ weaknesses very calmly, which is also helping him gain students’ insight and talent as a teacher.” 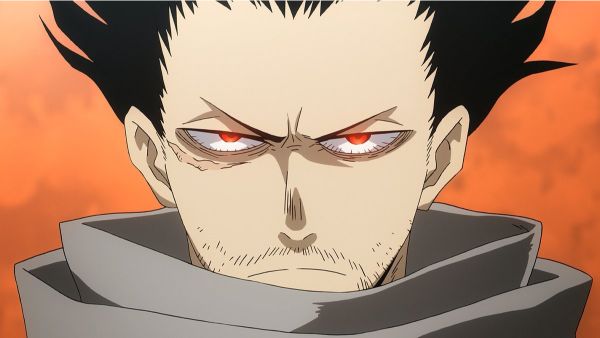 Saori(゜∇ ゜) “Since he is rational and the Hero himself, he can be a little strict to his students but… I love kindness he sometimes shows us too. Plus, he never openly shows us that kindness… Some know his kindness but for those who don’t know, I would want to recommend that they should massage an acupressure point on the foot… He’s actually kind but has a crooked mind. He’s the【man】… I mean, a good【old fart】, huh?” 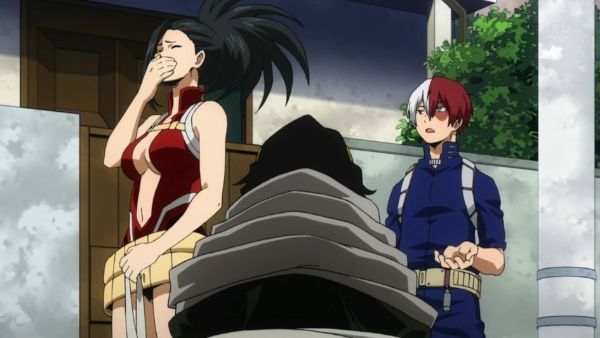 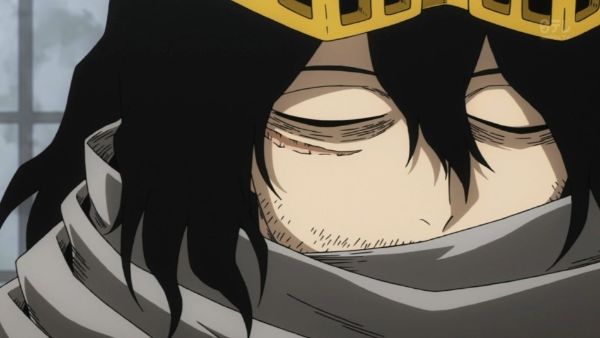 Saori(゜∇ ゜) “By the way, this is the most attractive scenes to me, but unfortunately, it’s not animated yet… This scene… I love this scene! (See below) I can’t wait to see this scene in Anime… For Aizawa Shouta lovers, who only watch the Anime, look forward to it! It’s gonna be the coolest scene ever in the very near future!” 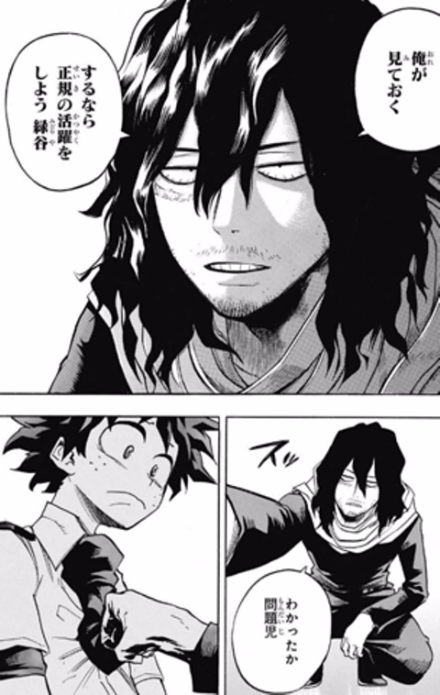 Saori(゜∇ ゜) “By the way, unexpectedly, he loves cats. One of the illustrations that the author posted on social media has such a cute combination of him and the cat, which is completely stretching its legs, fastening its claws… maybe the cat is not comfy with him? I mean, this kind of side of him is so unfair, right?” 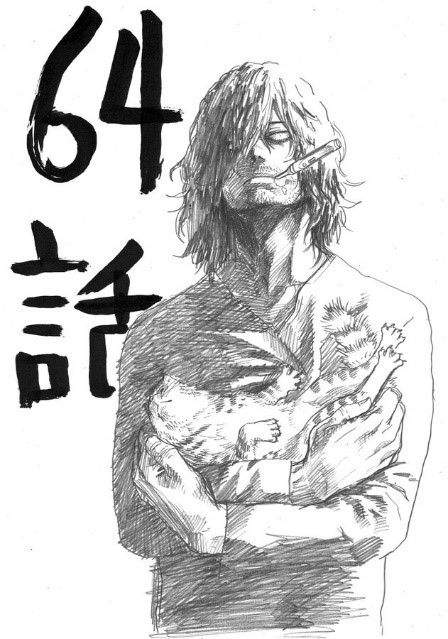 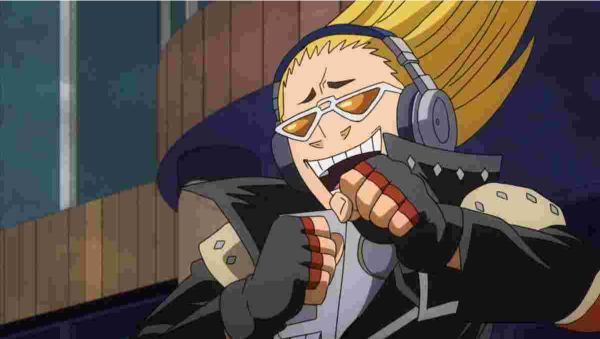 Saori(゜∇ ゜) “All right now! Even though this old fart above appears much less, compared to those two we’ve shared so far but he, Present Mic, has full of mysteries in himself. He is the Hero who has superpower using the voice, I mean, the sound, and is able to launch indiscriminate and extensive attack!”

Boss(  'ω') “He has appeared in the original but not in Anime yet, right? We really expect him to be there in Anime in the near future!”

Saori(゜∇ ゜) “To me, I have a feeling that he will play an active role from now on~!! The facial expression, which he showed us during the exam, was like the evil, not the Hero-like at all…

In Anime, his expression became a little milder but I just cannot forget his evil looking. He’s not the villain, okay? I’m sure he’s the only old fart who has this kind of evil look! He’s usually cheerful and easy-going, which makes that look even more attractive… I can understand that some people say he might be a traitor of the enemy, looking at that look.” 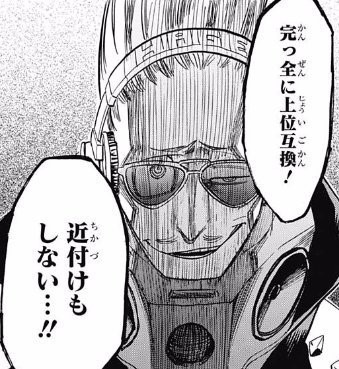 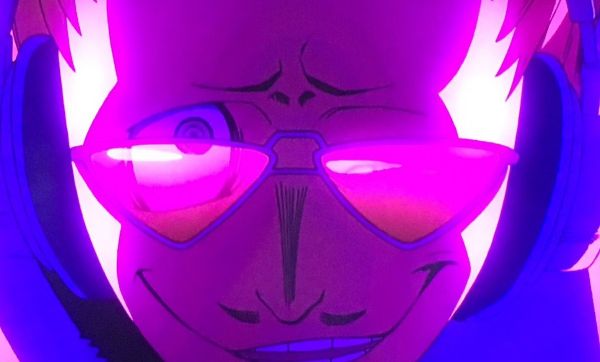 Boss(  'ω') “Well… he was getting defeated by the students late, though..”

Saori(゜∇ ゜) “By the way, such unique Chara, Present Mic, used to be a classmate of Aizawa Shouta-Sensei, who we shared earlier! I’ve heard that Present Mic is the one who named him Eraser Head as the Hero name… Since he rarely appears, we really pay attention to him when he does, huh? We cannot keep our eyes off from him, huh?” 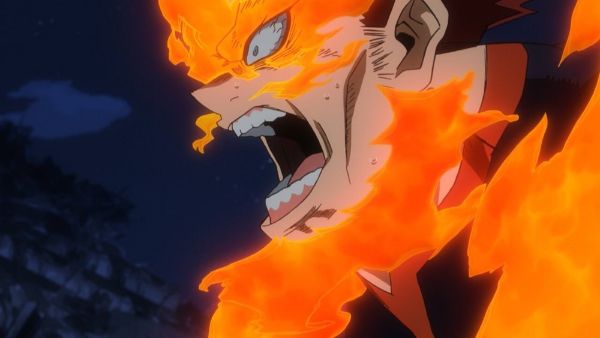 Saori(゜∇ ゜) “The last old fart we’ll share with you is awesome too especially since the greatest charm of him haven’t been depicted in Anime yet. For those who only watch Anime, please look forward to him appearing from now on.”

Boss(  'ω') “You keep saying old fart, huh? He is the Hero, Endeavor, who has the superpower of the fire and has been No.2 in the Hero world. While everybody has been giving up taking over No.1 Hero, All Might, he was the only Chara who has kept trying to go over him.” 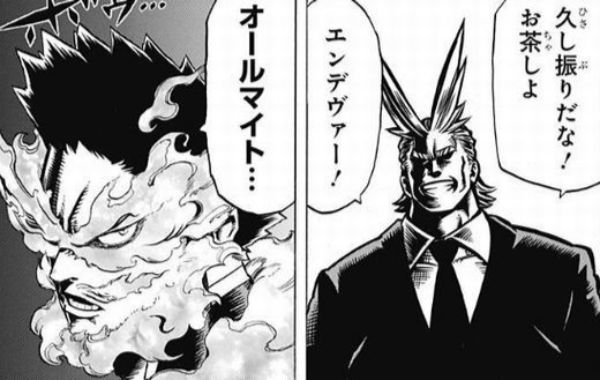 Saori(゜∇ ゜) “Yeah. He’s done nothing but kept thinking about going over All Might. However, he realized that he was no longer able to surpass him… and ended up getting married to the woman who had the superpower of the ice and giving birth to a child who has both the fire and the ice power so he/she can surpass All Might. And guess what? The child is the main Chara, Todoroki Shouto-Kun.” 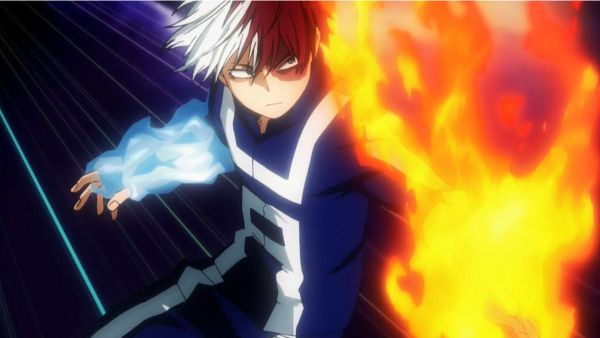 Saori(゜∇ ゜) “He might be the best as the Hero but…. I’m afraid he is not, as a father. He parented still-small Shouto-Kun too strictly and even told him that he is the【best masterpiece】, unlike his older brothers, who wasn’t able to take over his superpower… Honestly, he’s not a good father, I mean, he’s the worst old fart.”

Saori(゜∇ ゜) “I know, right? Even though he is not a good old fart, he changes himself when his son, Shouto-Kun was released by Deku-Kun’s words from the revenge-like thought of【becoming the Hero only by his mother’s superpower, not by his worst father’s one】… This is one of the parts that I really feel attractive about him too. Being immature as a human, he tries to reflect on himself…. Then he becomes even more attractive Hero… There is always a moment to look back what he has discarded which was unnecessary for him to become the No.1 Hero, which changes himself. He is the best old fart of all four, who grows up most.” 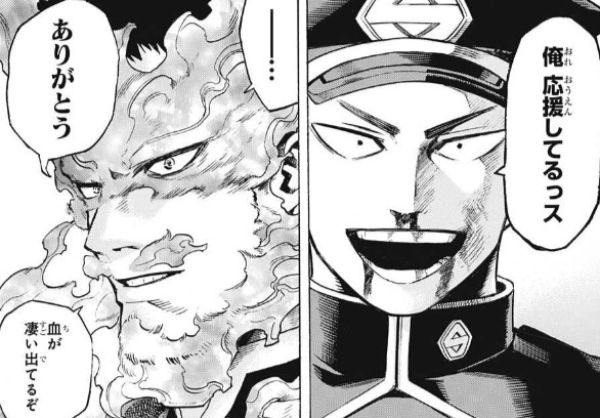 Saori(゜∇ ゜) “By the way, another best part of Endeavor is that he becomes a little clown when All Might is involved. Clever? Cunning?”

Saori(゜∇ ゜) “Well well, we’re expecting Anime, 4th Season, where such charming old farts play such active roles (maybe…)!! They officially announced that it airs!! We still don’t know how far they air but especially for Endeavor fans, look forward to the Episodes! He might play a huge role in 4th Season!” 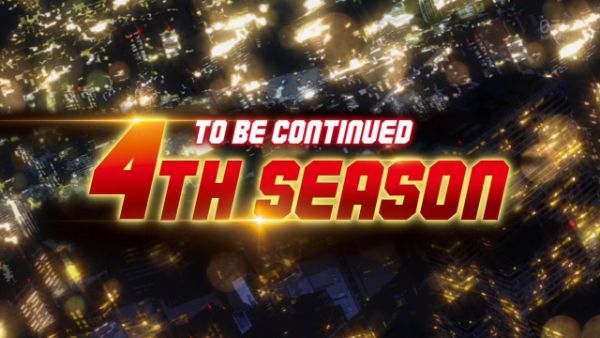