It’s a smartphone and PC game, now SUPER HOT in China, Japan and the USA!

Even though it was developed overseas, we do have various events in Japan, such as Doujinshi events, Cosplaying, Game Competitions and Collabo-Café, which are all so popular! 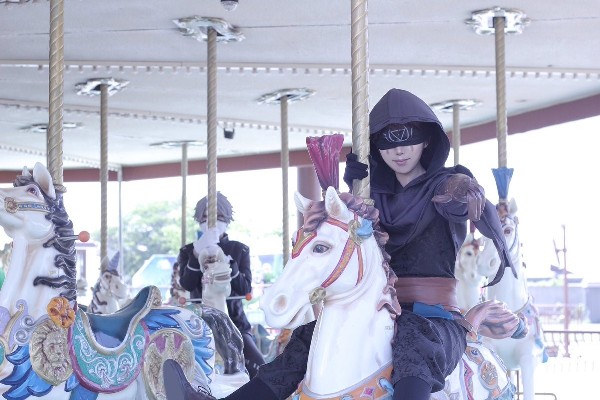 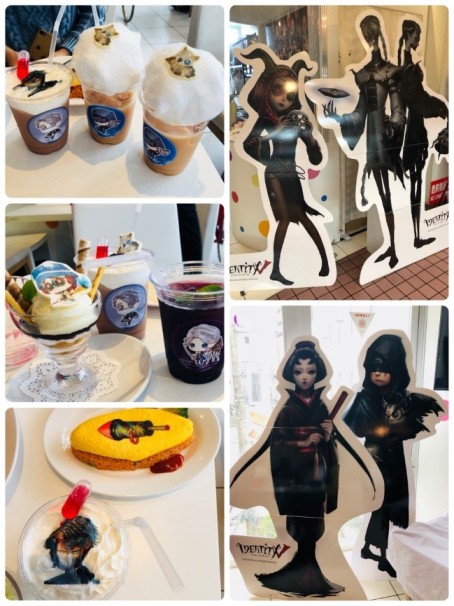 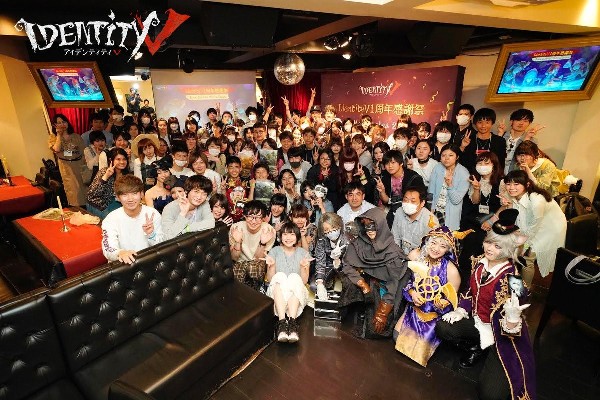 For those who have heard of the name【Identity V】, but don’t know what kind of game it is… we’ll share this article with you!

Saori(゜∇ ゜) “Hello everyone! It’s Saori from Otaku Republic! Today, I’ll introduce a game, which I’ve recently been into, called【Identity V】to you all!!”

【What is Identity V?】 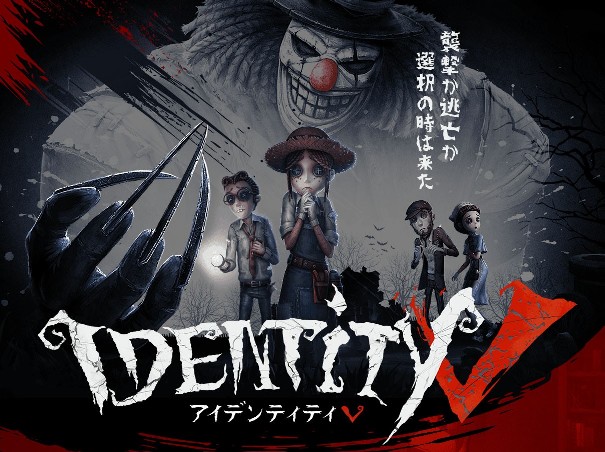 Saori(゜∇ ゜) “Wait a minute, Boss!! 【Identity V】’s attraction is not just the dark atmosphere! It’s a life-threatening tag game played by characters full of personalities! It’s a smartphone and PC game, which now is drawing so much attention in the whole world!!”

Saori(゜∇ ゜) “As for the battle game, the number of the characters in each side, is usually the same, even if the battle is as an individual or as a team, right?” 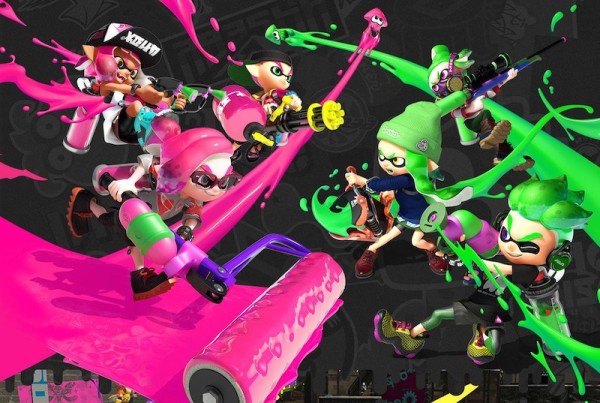 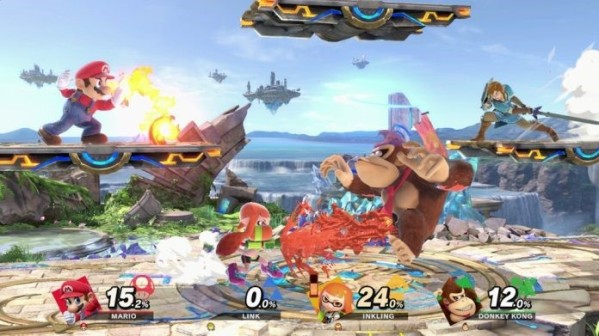 Saori(゜∇ ゜) “But for this game, ‘Identity V’, the battle is played with one character versus a team with four characters! The asymmetrical game means that the number of the fighters in each side is asymmetrical!”

Boss(  'ω') “Whaaat… isn’t that unfair for the side with one character, though?”

Saori(゜∇ ゜) “Nope! Because the purpose of each team is different! The one character becomes a hunter and its purpose is to try to capture as many survivors as possible out of four. On the other hand, the four survivors work together and try to run away from the hunter, ending up escaping from the area!” 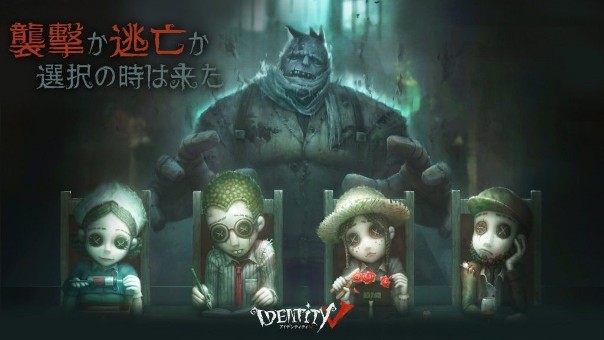 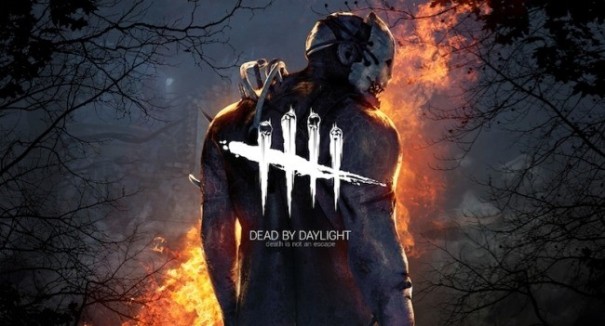 Saori(゜∇ ゜) “Exactly! The developer of Dead by Daylight was one of the members who developed this game too! Four survivors are locked up in the area and they cannot escape from there unless they open the gate, cracking five code machines!” 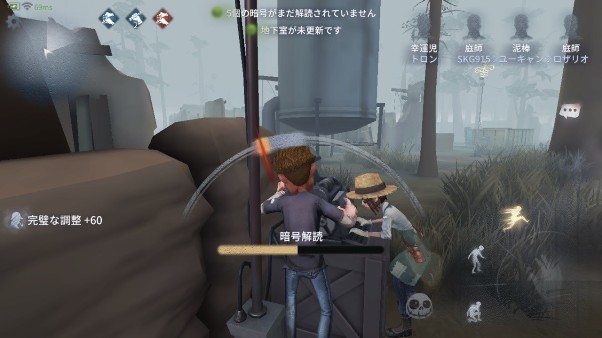 Boss(  'ω') “I see.. then the hunter does the opposite thing, huh? It tries to get the survivors out of the game, interfering them, who try to crack the codes..” 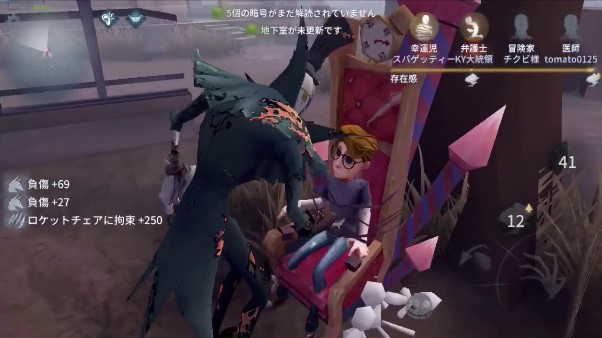 Saori(゜∇ ゜) “If the survivor gets caught by the hunter, it drops out of the game unless it is saved within designated time period. Survivors can either save the their captured buddies or abandon them… The hunter can either hone in other survivors or just stay where it is and get one by one out of the game for sure… This is absolutely a breathtaking tag game with the players always needing to use strategy!”

【The Best Part】Each character has a different ability! Go for it, making use of those unique abilities!

Saori(゜∇ ゜) “Let me see…. Mercenary solders, killers, clowns, perfumers, fortunetellers… and more! Characters with various careers join this【tag play】for their wishes or huge prizes. Some are not even human…” 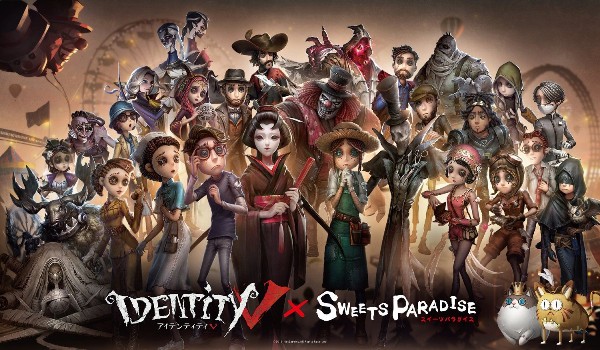 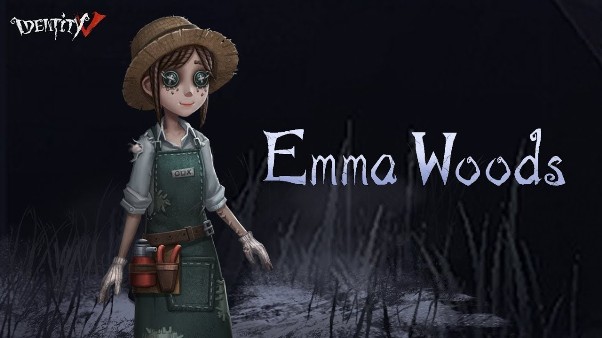 A girl who lost his father in her childhood. She’s in this risky game not because she wants to get prizes but to make her wish come true. She has an ability to ruin the equipment where the hunter can get the survivor out of the game. While she has the powerful ability, the hunter can figure out where she is (from the sound) as soon as she destroys the equipment. 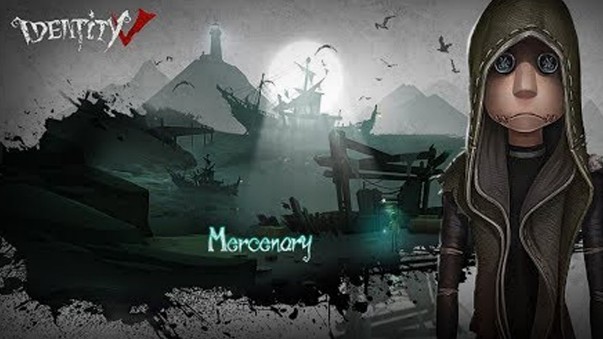 He worked as a mercenary solder before. After he retired, he was attracted by this life-threatening game, which reminded him of the war which he went through before and ended up joining the game. It takes him more time to crack codes than other chara but he is good at chasing (playing tag) with the hunter. He is able to make a dash at once when he rub the gauntlet, which he wears on his arm, on the wall. 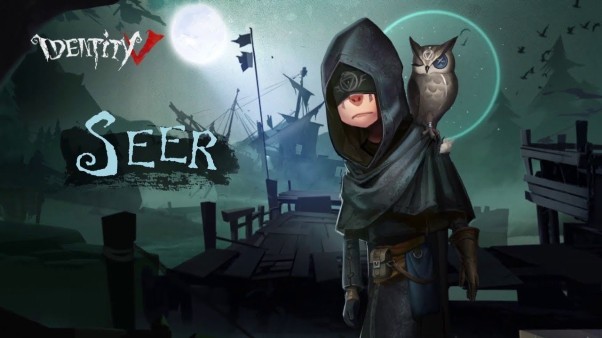 He is a fortune-teller, who can foresee the future. He joined this game by the advice he got from his fiancée. He has an ability to see through where the hunter is located when the game starts. Also, he can protect himself or his buddies from hunter’s attack with the power of owl that is on his shoulder. He seems to have the strongest ability but every time he has his owl protect him or his buddies, his physical and mental strength get weaker especially when the game lasts longer. 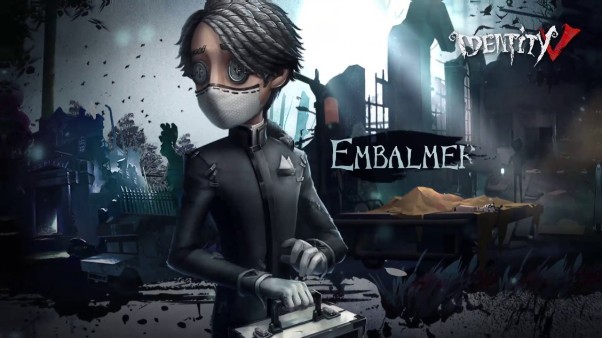 He received the invitation to this game for someone else but ended up joining it. He has an ability to save the survivor who is captured and detained by the hunter from the coffin, which he set up. However, the ability-triggering-condition is restricted and he is not good at playing tag or cracking codes.

【Don’t Miss Anybody!】Here are some hunters! 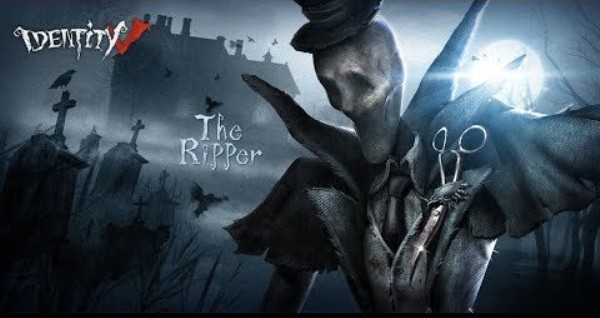 He is a killer, who has once shaken England. The fog always surrounds him and when his sword on the left hand touches it, he is able to do a long distance attack. Also, the speed of movement becomes swift with the fog surrounding his whole body. His abilities are all simple but very strong, which allows him to drive the survivor into the corner perfectly. 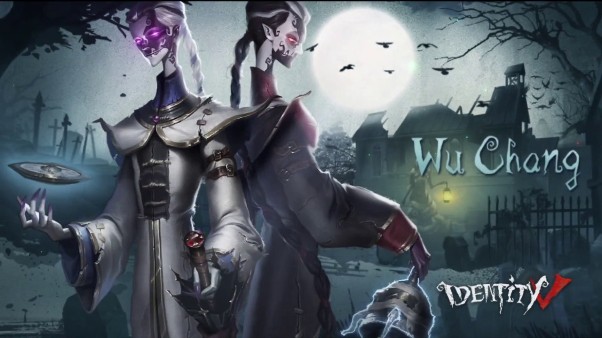 They used to be the brothers-in-low before. One day, the sudden heavy rain hit both of them and Fan Wujiu died, drown by the flooded river, and Xie Bi'an blamed himself on that incident, ending up killing himself. They both became messengers to invite the survivors to hell, after putting their sprit into an umbrella.  They steadily drive survivors into the corner, making up for each other’s flaws. 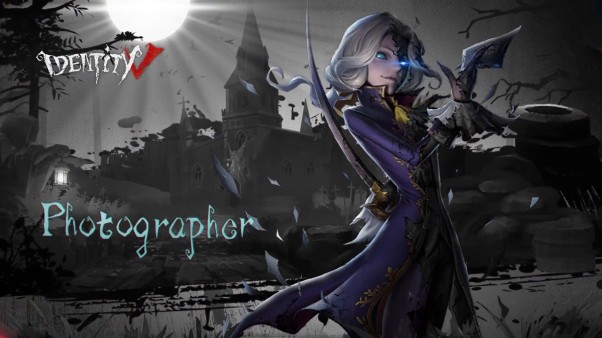 Joseph, who lost his loved one at war, struggled himself, knowing that he left the loved one there. Wishing for eternity, he came up with the technology where we can imprint our spirit itself in photos. When he takes a photo, another world of the photo, where time is deterred, is born. The damage, which Joseph gives in the world of the photo, can also reflect in the real world, which drives survivors into the corner.

Boss(  'ω') “Wow! I see lots of fantasy elements in here! It looks like it’s important which chara we are going to use in this game, huh?”

Saori(゜∇ ゜) “Exactly! For instance, four survivors are able to know in advance what kind of chara other three survivors will come with. We closely examine whether we focus on chasing (playing tag) with the hunter or the speed of cracking code. However, we never know what kind of your matching chara the hunter will be, unless the game starts.” 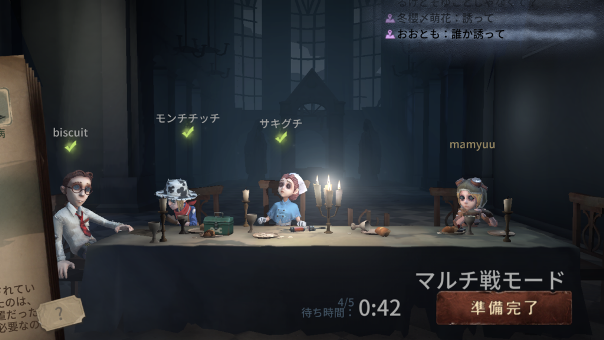 Saori(゜∇ ゜) “BUT! The hunter can check how the four survivors are organized in advance! That means you can choose the hunter with the best ability, matching with those members!” 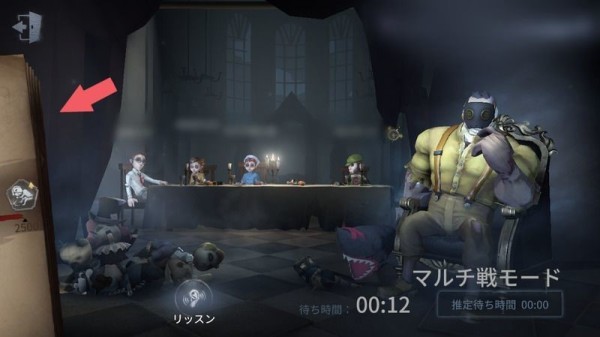 Boss(  'ω') “I see~! It looks like being by yourself will have some advantages, huh?”

Saori(゜∇ ゜) “Which survivor should we attack on a priority basis, who’s going to be the survivor that we should especially watch out… Using strategies even before the game starts is one of the passionate points in this game!”

Saori(゜∇ ゜) “Guess what? Now we’re celebrating its 1 year anniversary! It’s been livening up, with worldly events, collaborating with other works and even opening the collabo café in Japan~!!” 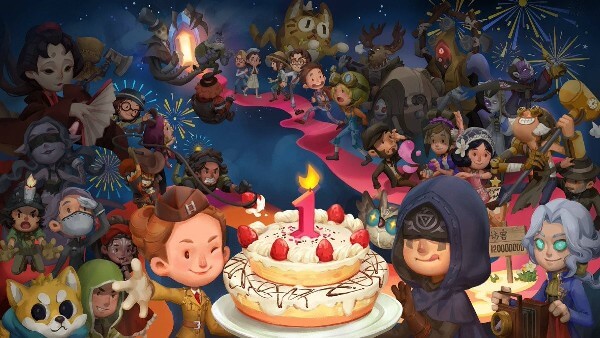 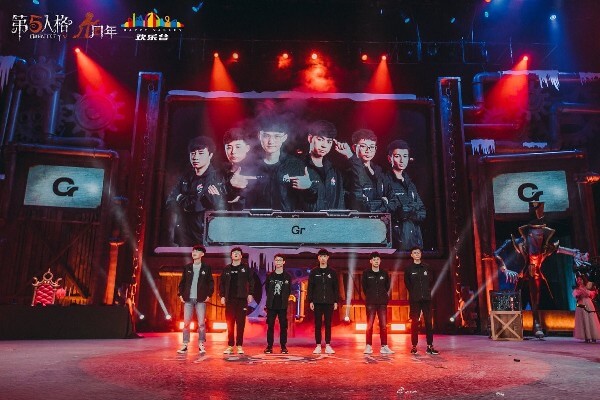 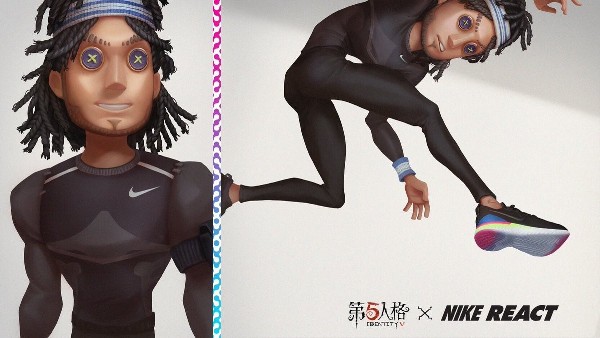 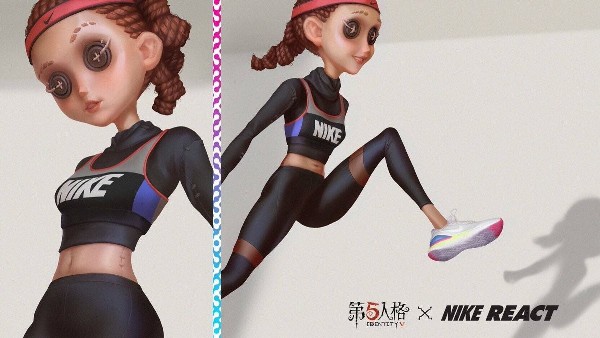 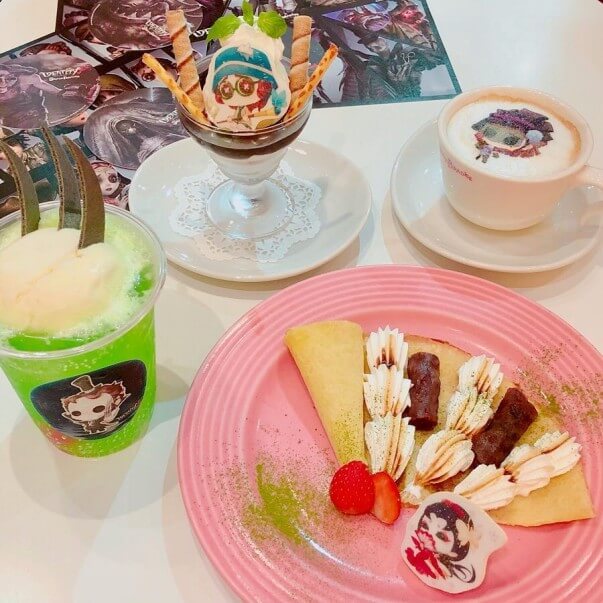 Saori(゜∇ ゜) “Of course! The collabo costumes are so lovely but… The ones the characters are actually wearing in the game are super lovely too! Some might be so gorgeous and elegant that they stand out too much, which might be disadvantageous for playing tag, though…?” 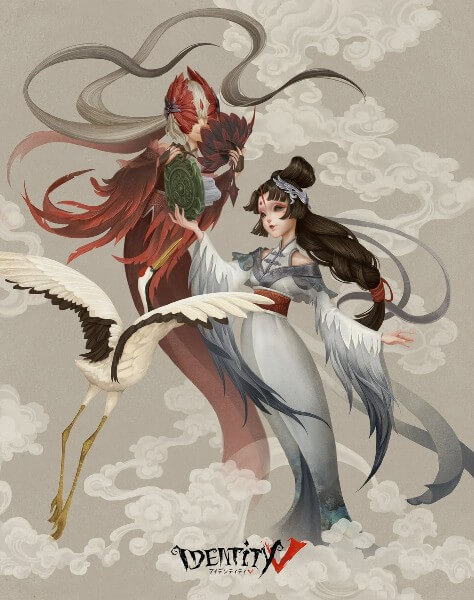 Saori(゜∇ ゜)「Casual! Easy! 【Life-Threatening Tag】which anybody can play! Why don’t you play Identity V too?” 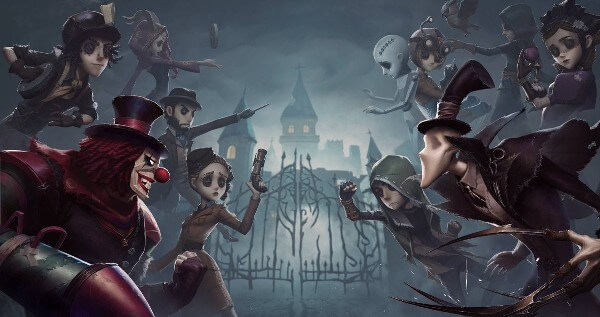 ●More and more Doujinshi events of Identity V are taking place in Japan too! Doujinshi Only Events will be held in July and August as well! 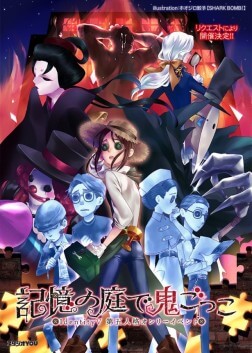 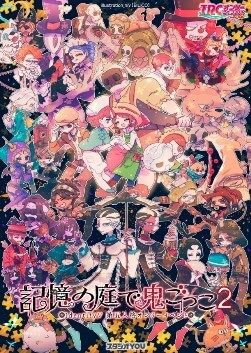 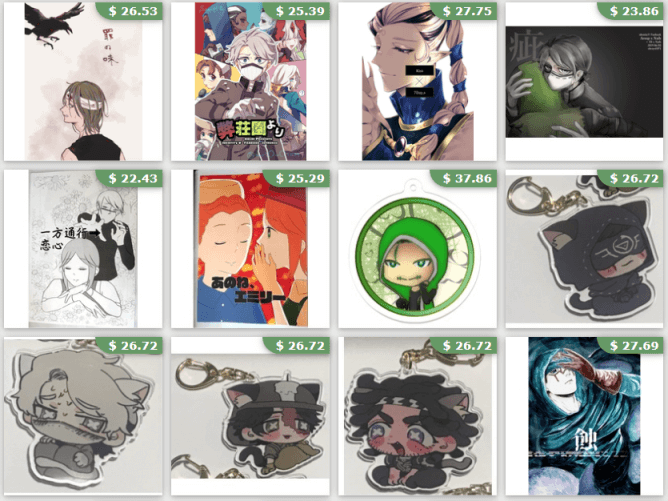 Here are some popular chara in Identity V! Not only Doujinshi but Doujin Items will also be releasing!

Alright now! We’ll see you at the next! Bye~!