Of course, I do！I’ll introduce some of them I recommend 100%！

I usually introduce some anime and games according to a certain theme but this time,

So, this is a special article that Saori will introduce on the basis of my preference and desire！

Here is the anime I’ll introduce this time！！ 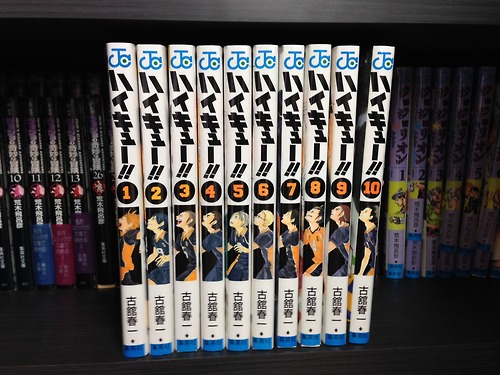 As you can see, I (Saori) finished reading all the original ones (including episode 11 which is not shown here！

the one which teaches us about “what is the team?”,

“what is the thing you can learn from losing?”

and “how precious is it to bet on a moment!”

Honestly, I thought it was going to be ‘hard to read’ since it was about volleyball, and I don’t know the rules... but I didn’t have to worry about it, to tell you the truth(・ω・）

Because it has many lovely scenes that are not volleyball games, which moved me.

★What kind of characters are there? 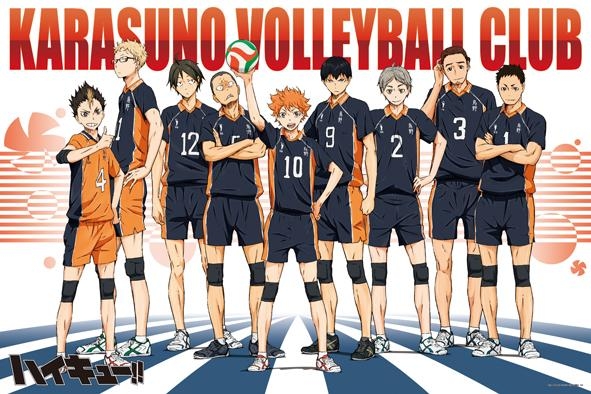 This story is about a high school volleyball team in Miyagi Prefecture, Japan, as a motif.

The main characters are Hinata Shoyo and Kageyama Tobio.

They went to different schools when they were in the 9th grade of junior high school but they played the formal game together only once.

Hinata-kun has surprisingly great physical ability and leads around Kageama-kun’s team which is said to be the one which will win the championship.

But Hinata-kun’s team ended up losing the games, since they’ve never played volleyball before including Hinata-kun.

Kageyama-kun is so proud of himself, especially when it comes to volleyball, he plays it in earnest.

That’s why he was just so shocked to see Hinata-kun having great physical ability, and strong mind that he never gives up on his sense of volleyball.

That made Kageyama-kun get angry and yell at Hinata-kun, “What have you done for whole three years in the junior high school!?”  Hinata-kun was trembled with disappointment by the words.

He joined the volleyball club which he has longed for since a little boy and finally obtained the chance to participate in the game.

But there’s no way to move on after his team has lost the first game in just 31 minutes.

Hinata “If you were a king controlling the court, I would beat you and be on the court for the longest time！！！”

Kageyama “The only people who can stay on the court are the ones who win and are strong... show me how strong you are and stay here longer.”

After the game, Hinata-kun swears for the revenge with Kageyama-kun.

Hinata-kun goes on to Karasuno High School where his ideal senior used to be, all the while, aiming to revenge the match.

See what happened next?

He saw Kageyama-kun in high school, which he thought he’s gone on to another famous high school for the volleyball…！

Of course they couldn’t get along well with each other at first.  We get irritated to see the relationship between them..

But, their teammates who always encourage them strictly and kindly, are trying to change their relationship, from ‘The worst rival’ to ‘The best partner’.

As time goes by, Hinata-kun, who has a high ability but doesn’t have any technique, starts learning ‘the technique of volleyball’ to make use of Kageyama-kun and his teammates’ abilities.

On the other hand, Kageyama-kun, who has a technique but can’t play with other teammates, starts learning ‘the importance of a team-play’ to make use of Hinata-kun and his teammates’ good points.

The two players have grown better day by day making people around them get involved with them, being greedy for the victory.

If I could choose someone from the appearance, I would pick Kageyama-kun and Azumane Asahi-kun(*´д｀*)…

Nishinoya Yuu-Kun and Tanaka-kun are really like ‘reliable older brothers’.

They both have the characters that they take really good care of other teammates and when they’re not in a good mood, the two can always make them be in a good mood quickly!!

Tanaka “Guys, people being on this side of the court are all on our side！You can mess it up, bother us, even make mistakes!  We can fix it.. that’s why we’re here for you guys!”

If people who are usually silly say something nice like that to encourage their teammates seriously... (*´д｀*), won’t you fall in love with them?  I (Saori) am somehow weak for this gap...

★What’s cool about this anime?

We can not fly. So We find a way to fly.

Although there are such wonderful members at Karasuno High School, they don’t always win.

Actually, there are many more scenes of adversity or losing compared to other anime.

So it’s far from the regular anime which shows ‘the main characters with special abilities and skills keep winning’.

Since the writer of this anime used to be a member of the volleyball club, the content of each game are written precisely.

And he writes faithfully not only about the joyfulness for the winning teams but also about ‘the mental conflict for the losing team’.

Not only the players of Karasuno High School but also the ones against them trying to make efforts believing their teammates can obtain victory.

Like this, there are many moving words that can encourage you to make the next step when you’re disappointed in this anime.  They are never cheap words.  The more serious you’ve been for your aims, the more you can feel from those words by the characters.

It’s not that simple to say something like, “Never give up”.

“I’m trying.. I just wanna give up..” The moment you thought, you can make one step.

If you guys are weak like that, that means you guys can improve from here.  Isn’t it wonderful?

Just don’t give up catching the ball I passed you！！！

You might think I’ve exaggerated to talk about this anime, but I’m really grateful that I found this anime.

I’m sure it’ll be like a bible that I’ll read many times when I’m depressed.

And it’ll certainly be a treasure for anybody full of passion, teaching us how to be greedy for the victory and how to overcome when you lose.

Well!  Once you read the original of Haikyuu or watch the anime, I’m sure you’ll be into it!  Why don’t you read it!!

Ok then, I’ll see you in the next anime introduction!  See you guys!