Free!－Dive to the Future－It’s About To Air! Let’s Review a History of Free!!

Boss(  'ω') “Hello everyone! Finally TOMORROW! Free!-Dive to the Future- will air! Are you ready for the 1st episode? I’m Otaku Republic’s Boss!”

Saori(゜∇ ゜) “Hello everyone~! Finally TOMORROW! Free!-Dive to the Future- will air! Can’t wait, huh~? I feel like summer has finally come! It’s Saori from Otaku Republic!”

Boss(  'ω') “But you know what? Most of you, who are reading this article right now, must be thinking, ‘What was the story of Free! like?’!”

Free!－Dive to the Future－It’s About To Air! Let’s Review a History of Free!! 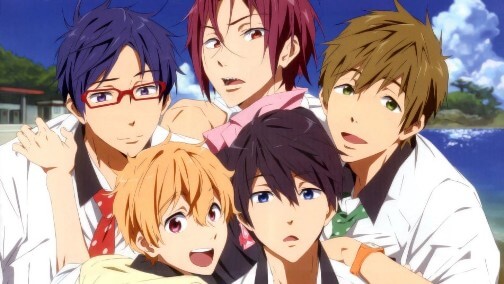 Saori(゜∇ ゜) “2013 is when its Season 1 aired! It was a story about the boys who belonged to the swimming club at high school in the city whose model was Tottori Prefecture in Japan!”

Saori(゜∇ ゜) “Haruka, Makoto and Nagisa were all childhood friends who went to the same high school. When they met again at high school after a long time since their childhood, they tried to revive the swimming club but they were told that they cannot make it happen unless there are more than four members in the club…” 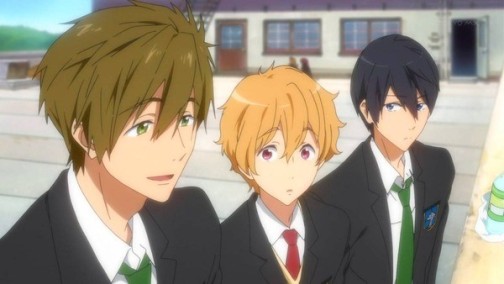 Saori(゜∇ ゜) “Then one of their childhood friends, Rin, came back from study abroad in Australia! Rin, who got along well with them back then, sent a challenge to Haruka, saying ‘Which can swim faster, you or me?’…!” 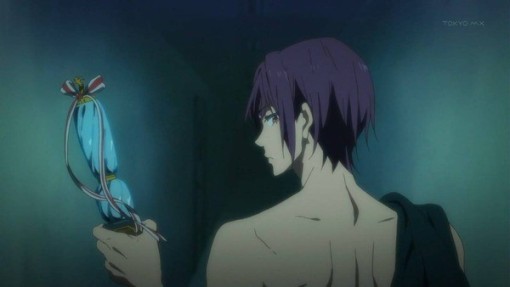 Boss(  'ω') “It was so much fun from the very 1st episode, huh? It made us want to watch the 2nd episode so bad! It was such an interesting scenario and above all, the Chara were all super attractive! I’m sure anybody who watches this will have his/her favorite Chara among all. Actually, I had so many of them! I was so happy when I watched the final episode, ‘see you next summer’!” 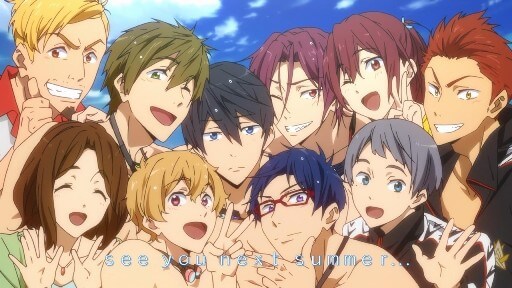 Saori(゜∇ ゜) “And the Season 2 of TV Anime Series aired one year after that as it was announced! Five Chara, who went to different schools were able to understand with each other and they all went on to the next grade! Haruka and Rin, who became the leaders of the swimming club of each high school, swore that they would compete again but…?” 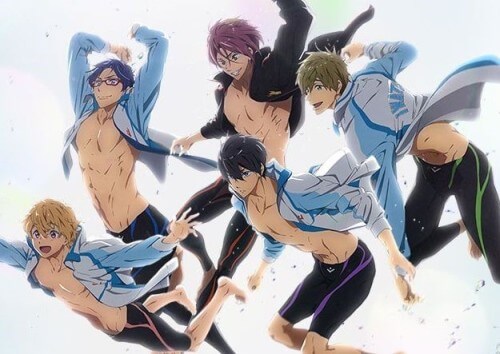 Boss(  'ω') “I remember, in this story, Yamazaki sousuke, who knew the past of Rin and Haruka, appeared and all the Chara who became 3rd year of high school students started to think seriously about their futures, right?” 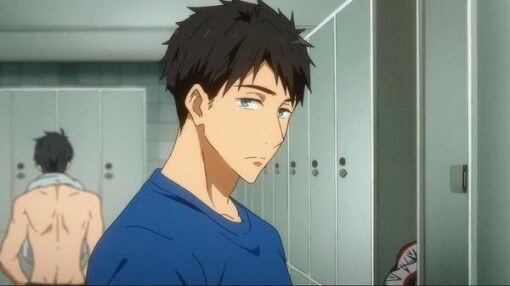 Saori(゜∇ ゜) “To them, a ‘swimming’ was ‘a wonderful thing where they can feel fun, having a strong bond with other members’. But before they realized it, that thought about the swimming changed to ‘something that is just a competition, ‘to win or to lose’… Some members just enjoyed swimming while others tried so hard just to win. Moreover, some started thinking of quitting because of those mixed feelings of all the members… They all seriously thought about one question, ‘What is a swimming for us?’. But they looked so impressive, though…” 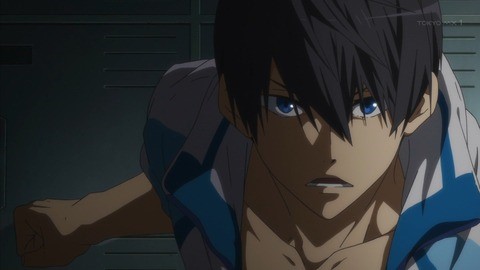 Boss(  'ω') “It was such a great story, wasn’t it? Since they all had to be winners or losers at the end, it wasn’t something that is just for fun. The last episode was so touching too. There was a scene where each member finally reached his answer to the question, ‘how should we face something we love’.” 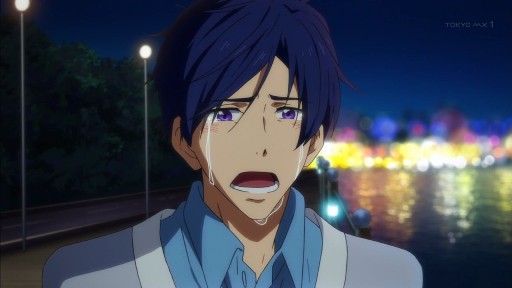 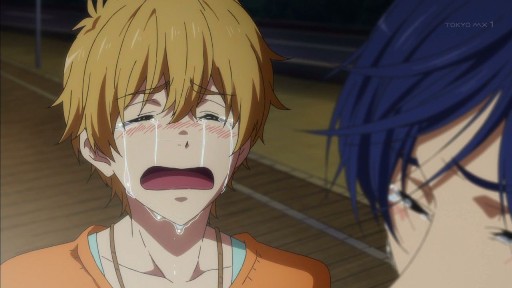 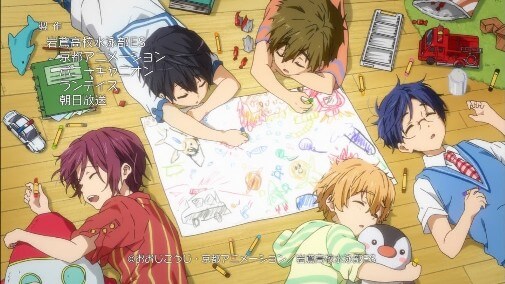 Boss(  'ω') “Haruka and other members finally graduated from high school… but?” 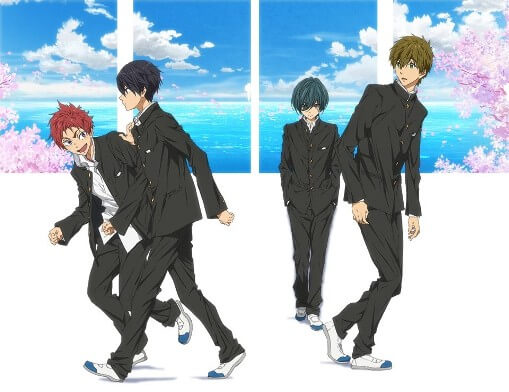 Saori(゜∇ ゜) “Guess what? The next story that aired was the movie version & the past version! It was a story about Haruka and other members when they were junior high school students!”

Saori(゜∇ ゜) “Haruka and other three members, who went to the same junior high school, competed a medley relay in the swimming competition. Each one of them can swim faster than anybody else but when it comes to the group competition, they had a hard time recording the good time. They ended up blaming on other members and quarrelling with each other.”

Boss(  'ω') “They were all good in the individual swimming. Then why did they try a relay in the first place? I really liked the answer that four of them finally reached~! It was heartwarming! Some of them had appeared in the high school version, so I got so excited!” 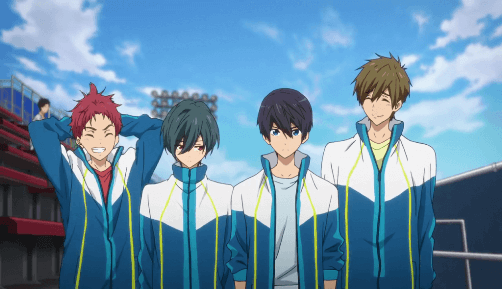 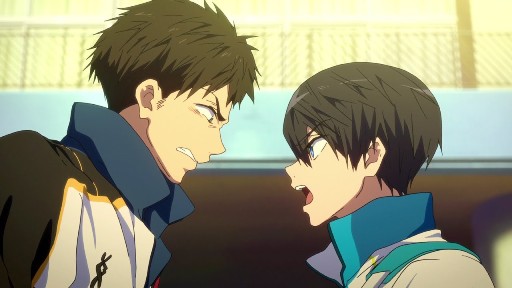 Saori(゜∇ ゜) “How about the movie version, part 2? The title was Take Your Marks, which had both omnibus version, Timeless Medley, and the new short episode!” 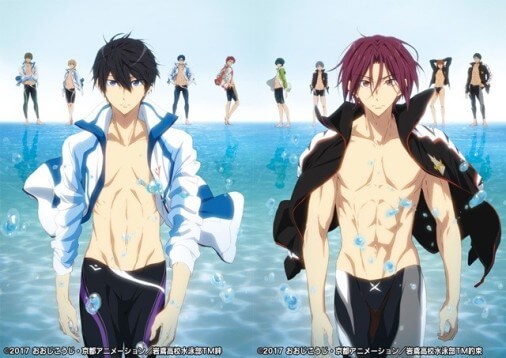 Saori(゜∇ ゜) “As for Take Your Marks, it shows a secret of Chara, which was drawn in the new short episode! We were able to watch such a story a lot of time, huh~? Especially those who have watched all the way to Season 2 of TV anime version, should get excited, thinking ‘Wow, I didn’t know they were doing such things behind the scenes…’! You will have a feeling as if you were watching the ‘Anime Extra Edition’!” 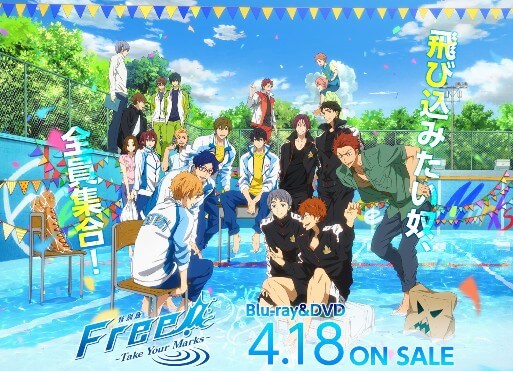 ★Well… then what is the story of Free!-Dive to the Future- like? 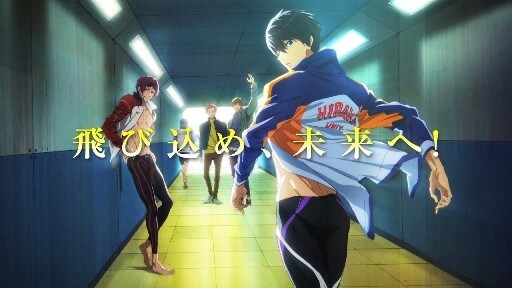 Saori(゜∇ ゜) “Already! Here’s what Free!-Dive to the Future- is like! I’m sure it will be the official sequel of TV anime version since it shows a ‘college version’ in the promotional video!”

And guess what! I saw some characters in the hero image, who appeared in the junior high school version, High Speed! Free! Starting Days…!

Boss(  'ω') “I just cannot wait! Everybody please! Watch my loving Rei-Chan’s great work with me.”

Saori(゜∇ ゜) “Anyways! I just cannot wait too! I think they will show us a detailed explanation in the 1st episode but if you really want to enjoy the Free! world, I recommend that you should go watch the movie version besides the anime! Everybody! Let’s enjoy watching Free! Anime which is super HOT this summer!”

Already! We’ll see you all at the next update! Bye~!